Another busy day! Breakfast began the day, of course. The choir is learning how to pace themselves so that they get enough rest when there is so much going on. Many are figuring out how to wash their clothes in a bathroom sink or bathtub, which is always a fun skill to acquire. The hardest part is usually figuring out where to hang all the clothes for drying when there are 2 or 3 people sharing a room; I’ve seen some very inventive methods over the years… Most are trying to eat well and stay healthy.

BYU Singers had a rehearsal at the same church as yesterday and relished the sound. The choir was very happy to be rehearsing in such a lovely space again. Dr. Crane is happy with their productive rehearsals, so everyone is happy. 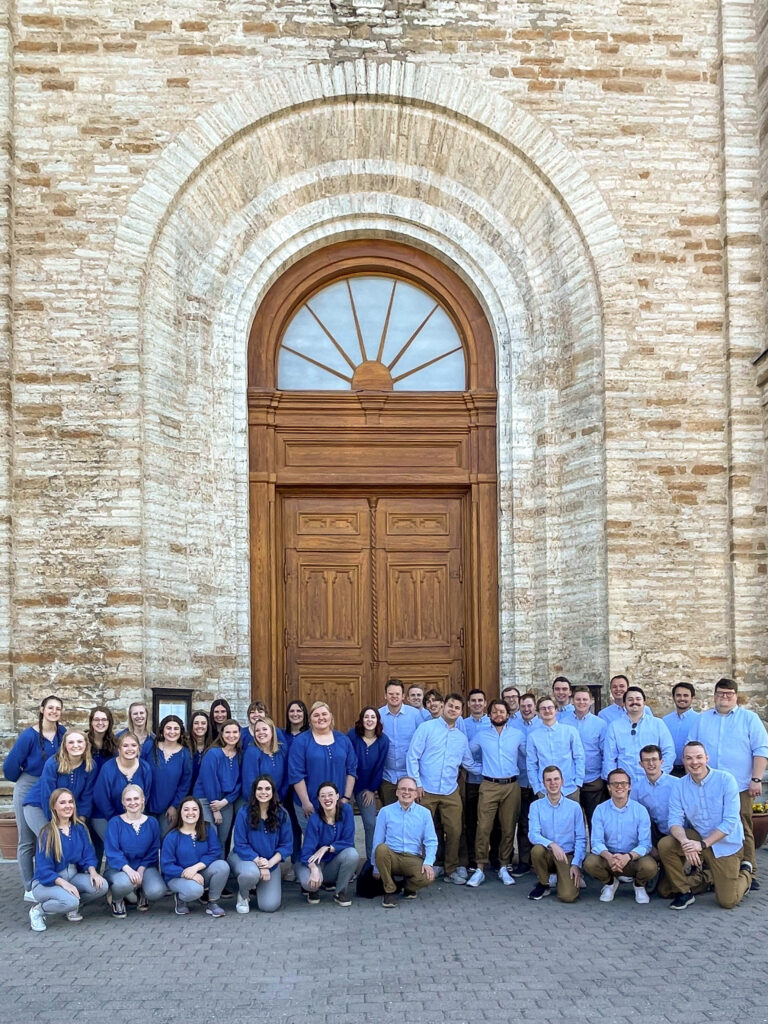 Lunch was burgers or at the market—then they had free time. When the choir splits up it is challenging to keep track of all of their activities, but here are a few that Nicole Dayton, our blogger extraordinaire who is keeping me up on what to write about, was able to find out about and send photos of.

Some were taken to Lahemaa National Park by some Estonians they have met here, where they hiked the Viru Raga Trail through the bogs. There are lots of bogs with wooden pathways between them. This group enjoyed their time seeing the natural beauty of Estonia. 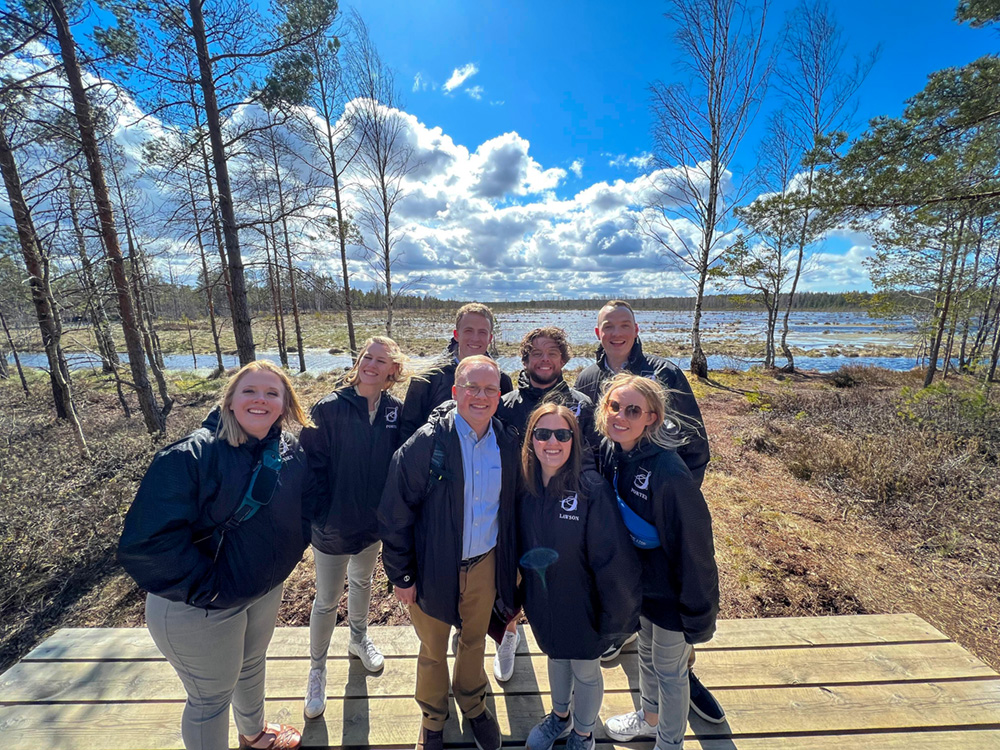 At the national park

Another group went to St. Catherine’s Dominican Monastery, a former monastery and one of the oldest buildings in Tallinn. It is in the heart of Old Towne. It was destroyed during the Reformation in 1524, with only fragments remaining. Parts have been incorporated into the Roman Catholic St. Peter and St. Paul’s Cathedral, and other parts are visible via St. Catherine’s Passage. 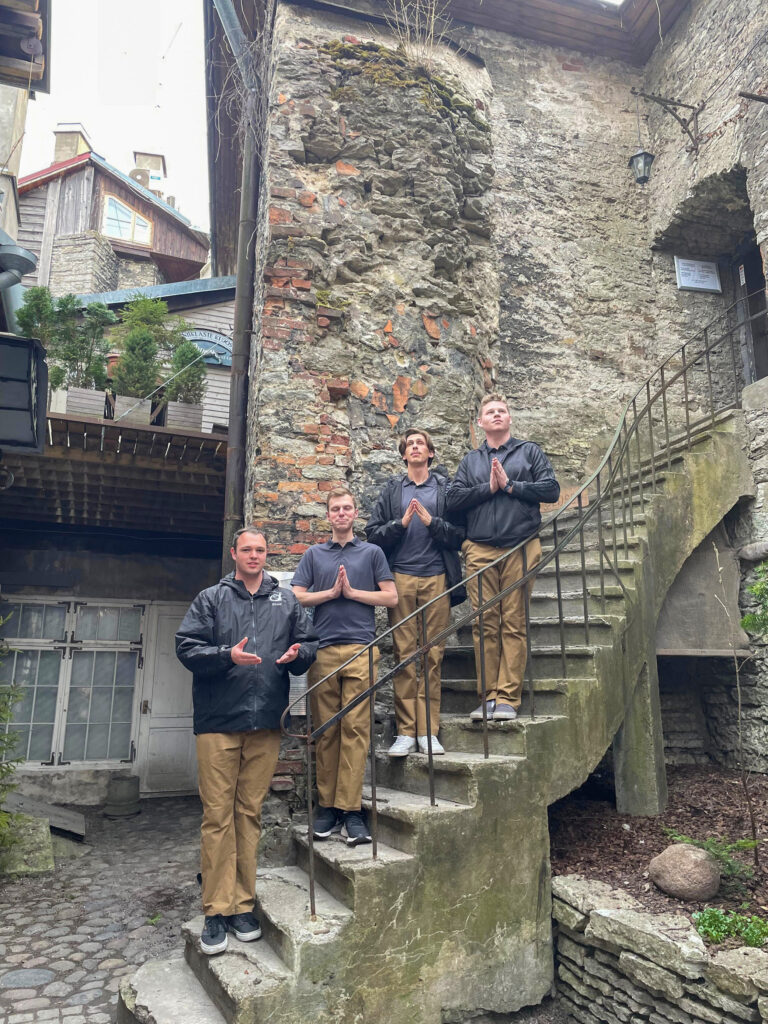 Monastery group (can you tell?)

Another group went to the Kadriorg Palace and Art Museum. They walked by the coast, which is the Gulf of Finland. They had thought they could visit the museum, but there was a diplomatic reception for Polish officials which kept them outside. The choir members did see the well-dressed diplomats as they entered the palace. The Kadriorg Palace was built in honor of Catherine I (Kadriorg in Estonian) of Russia, and is thought to be one of the most beautiful examples of Baroque Architecture in Estonia and even in Northern Europe. It is surrounded by a garden of fountains, hedges, and flowerbeds that are modeled on Versailles. The museum houses a collection of foreign art—Western European and Russian art from the sixteenth to the twentieth centuries. The Presidential Palace is also in Kadriorg. It echoes the style of the palace, built in 1938 as the official residence of the Estonian president. 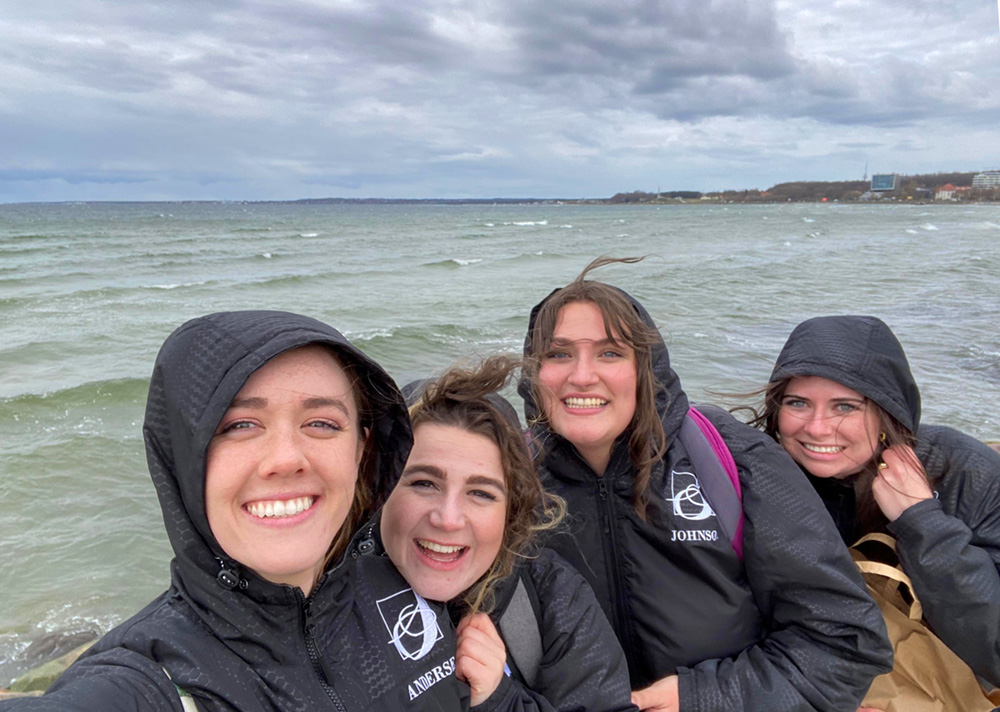 At the Gulf of Finland 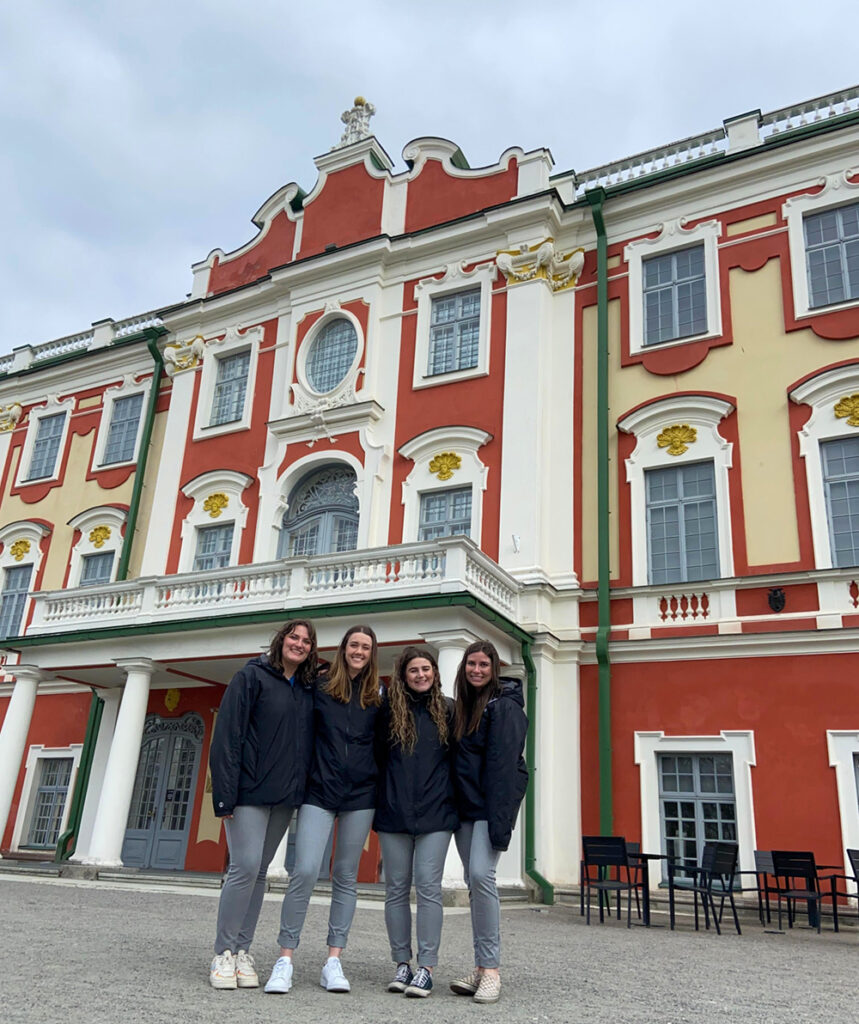 In front of the palace

The palace and grounds

This was a very cold day—a humid cold which makes it worse—also overcast with strong winds. They persevered nevertheless.

Kalev is a chain of chocolate stores throughout Tallinn—it is cheap and and there is abundant European chocolate. Apparently chocolate is now part of the healthy eating that the choir is attempting to do while on tour. It’s the unmentioned group of the food pyramid. But the market has amazing fruit, so that might counteract the chocolate a bit.

Their rehearsal in the evening was with (I believe) the two choirs with whom Singers will be performing in Thursday’s concert in the wonderful St. John church— HUIK! and the Veronika Portsmuth Academy Chamber Choir. All worked on a piece in Estonian that our choir has learned on tour. A young woman only 22-years-old (possibly a student) conducted the choirs; our choir really enjoyed working with her. Singers quickly acclimated to the other choirs and their conductor, and had a good rehearsal. They observed the rest of the rehearsal after their part was done, and found their music to be very interesting; it seemed to reflect Estonian’s love of nature. Their pieces had bird sounds and rain sounds. 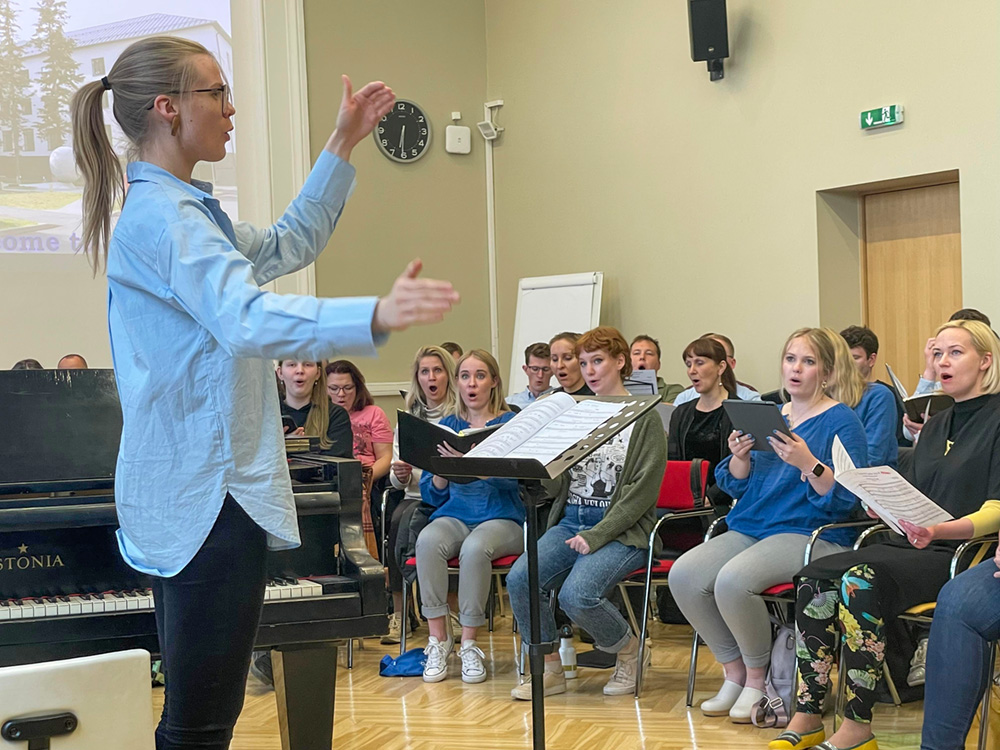 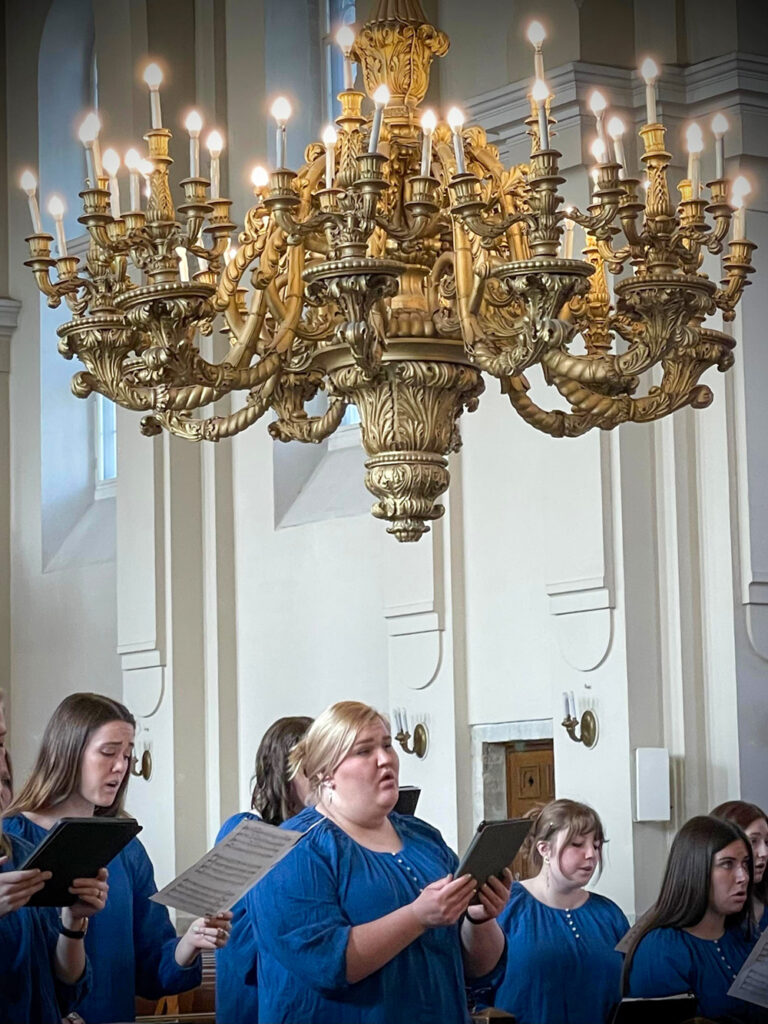 Rehearsal under a beautiful chandelier

They had a late dinner at a pub after the rehearsal, and now they are tired and heading to bed. All is good in Estonia. 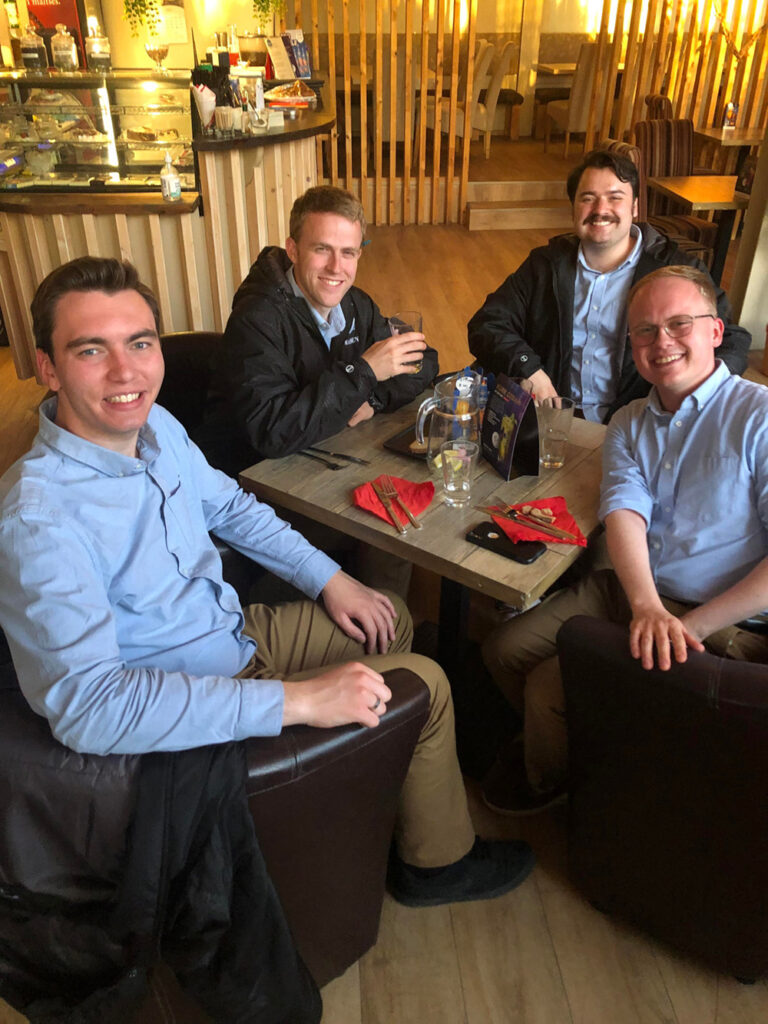 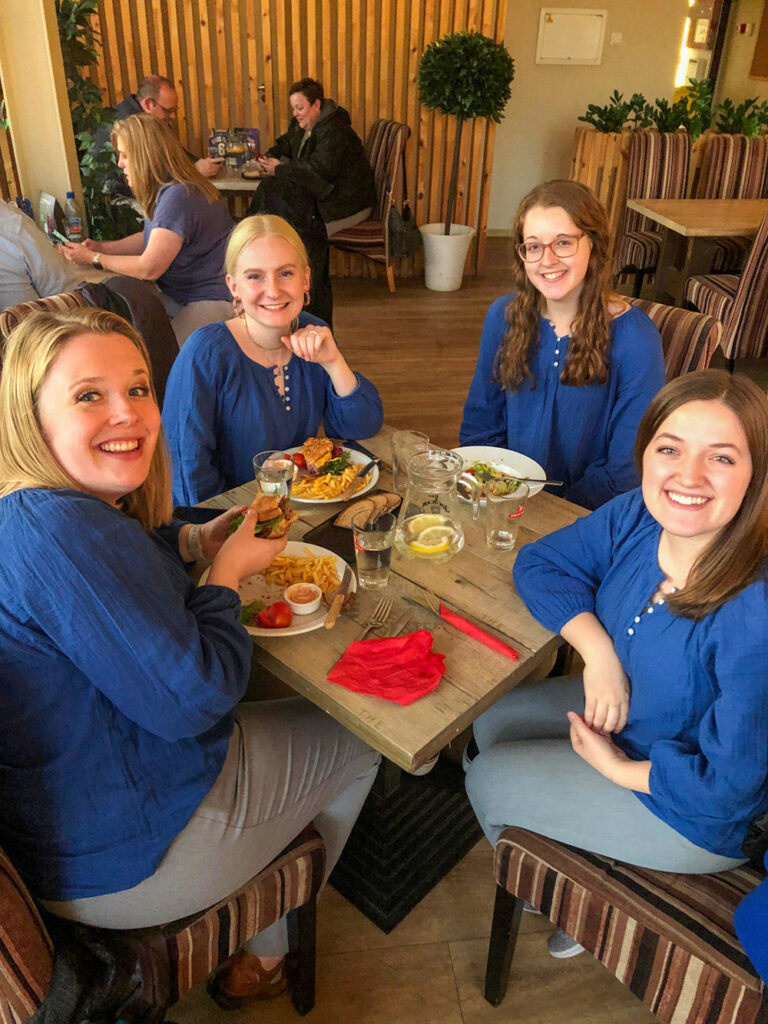