Today was reported to be great! As every day in Tallinn has begun, the choir enjoyed their hotel breakfast. They then headed for their rehearsal at the LDS chapel. That rehearsal was described as “Fantastic, effective, and focused;” all promising descriptors for a rehearsal the day of a concert. The choir members were in better shape today after a good night’s sleep—this delayed rehearsal was a brilliant idea.

Afterwards the choir split into two groups: some found Mexican food in honor of Cinco de Mayo; others shopped and hung around Old Towne. 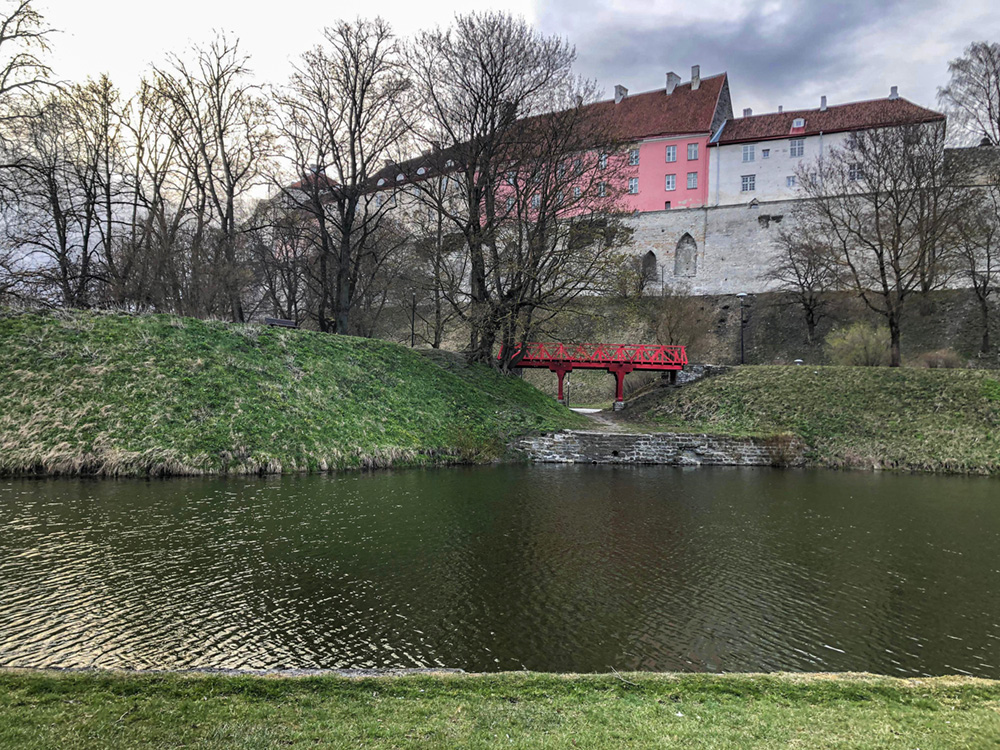 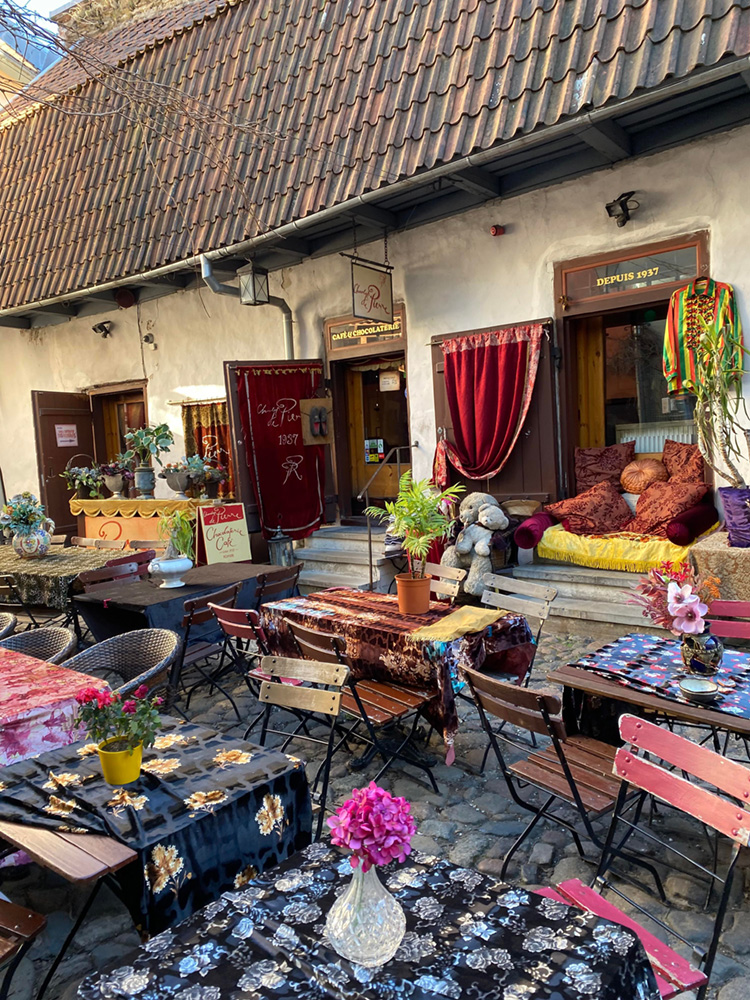 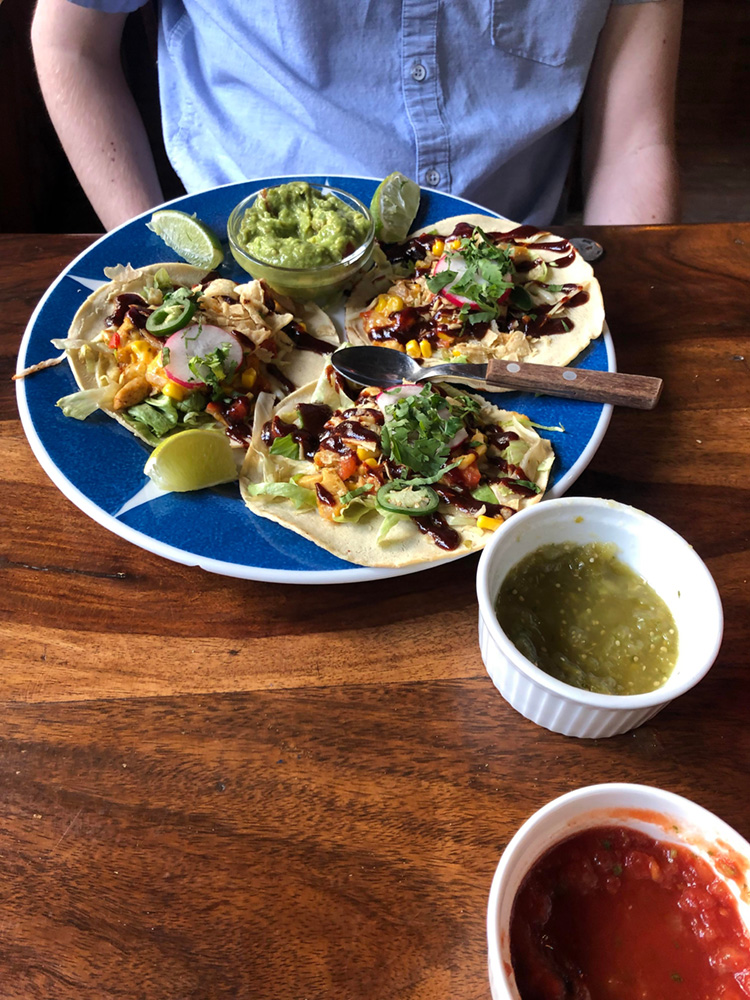 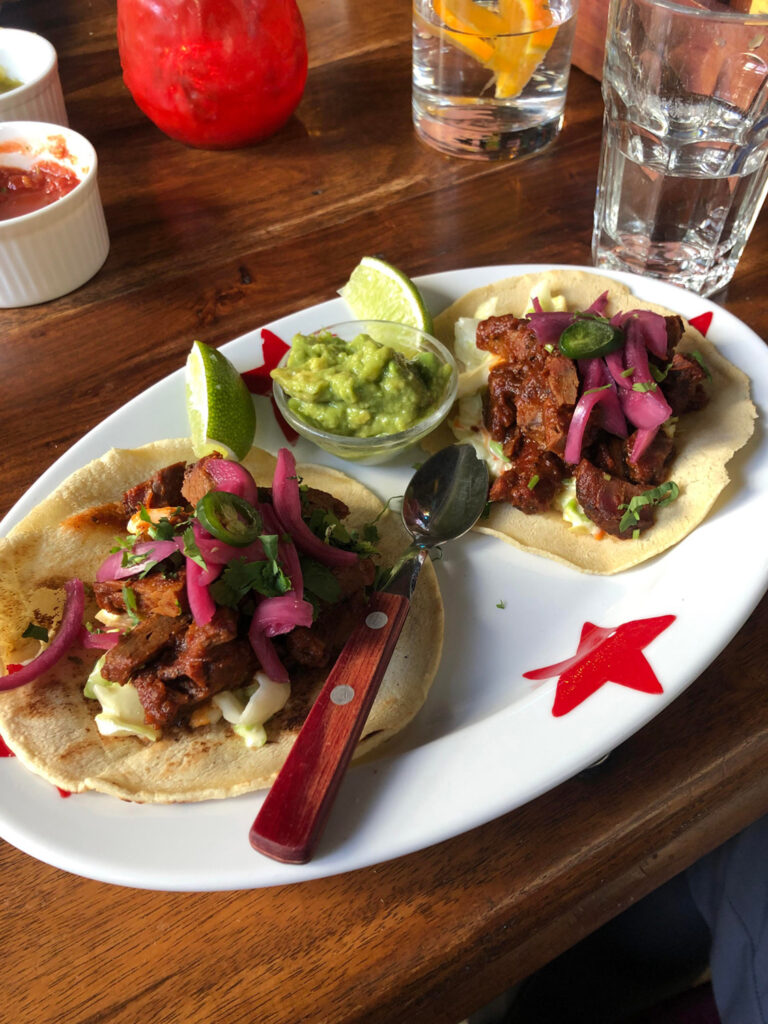 Another smaller group went to the Estonian Academy of Music and Theater. Ode, the student conductor of the HUIK! choir is studying for her master’s in choral conducting. She gave a tour of the academy and let our students sit in on a rehearsal. They learned about the universities in Estonia; this one is just for music and theater. Estonia is a new country, and is still exploring what works and does not work in academia. Young students can start in specific schools for music that go all the way to university. Ode switched to music-specific studies in 8th grade. This has given her lots of experience up to now. There are more master’s than bachelor’s degrees at this university. Examples of master’s specific degrees include chamber singing, opera, or jazz. There are not enough faculty for all of the programs, so they oversee multiple areas. Their education is free. BYU Singers observed three choral conducting students at end of their bachelor’s degree, conducting Vivaldi’s Dixit Dominus with orchestra, soloists, and choir. They then had a tour of the school. 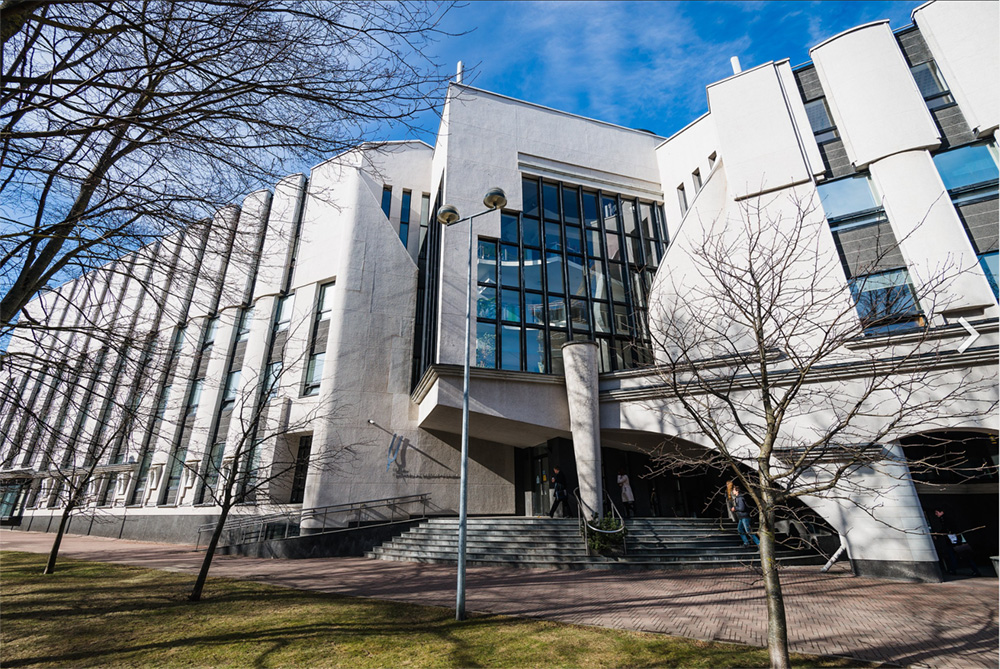 The Estonian Academy of Music and Theatre 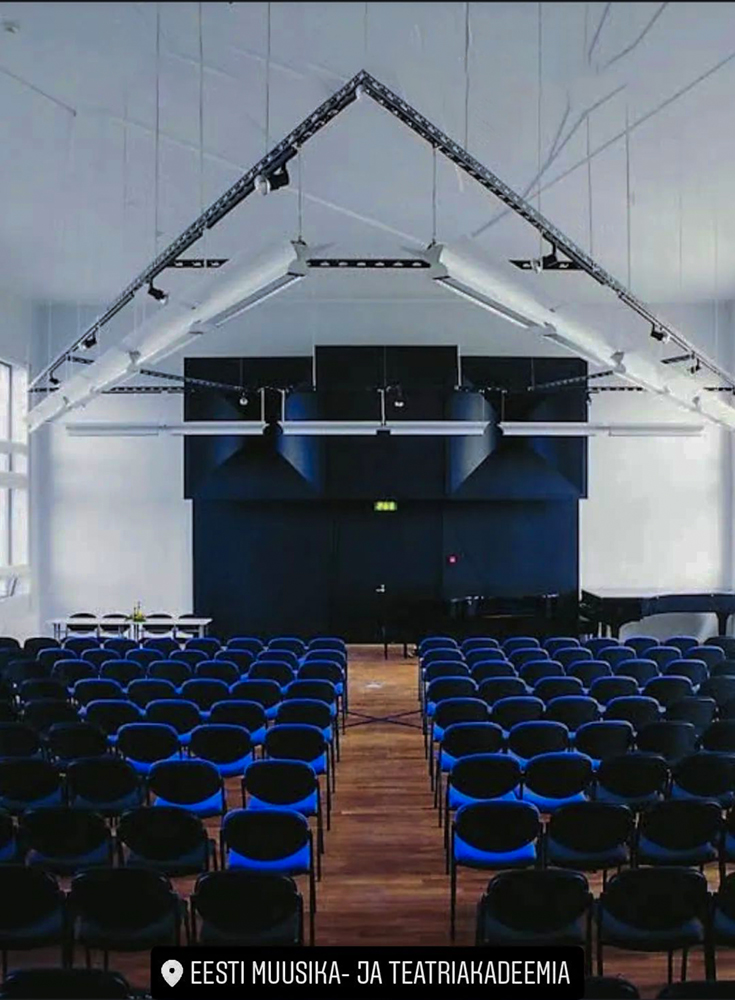 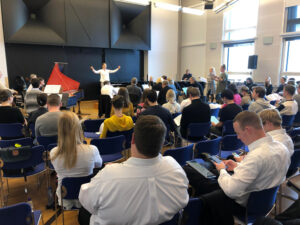 Tonight’s BYU Singers concert was shared with Segakoor HUIK and Kooriakadeemia Kontsertkoor. They performed in St John’s church, a beautiful space they knew well after a few hours of rehearsals there lately. 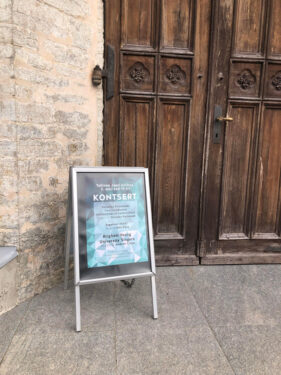 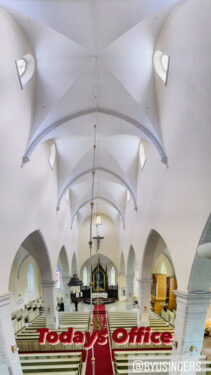 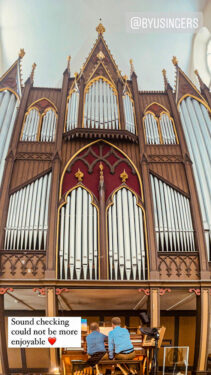 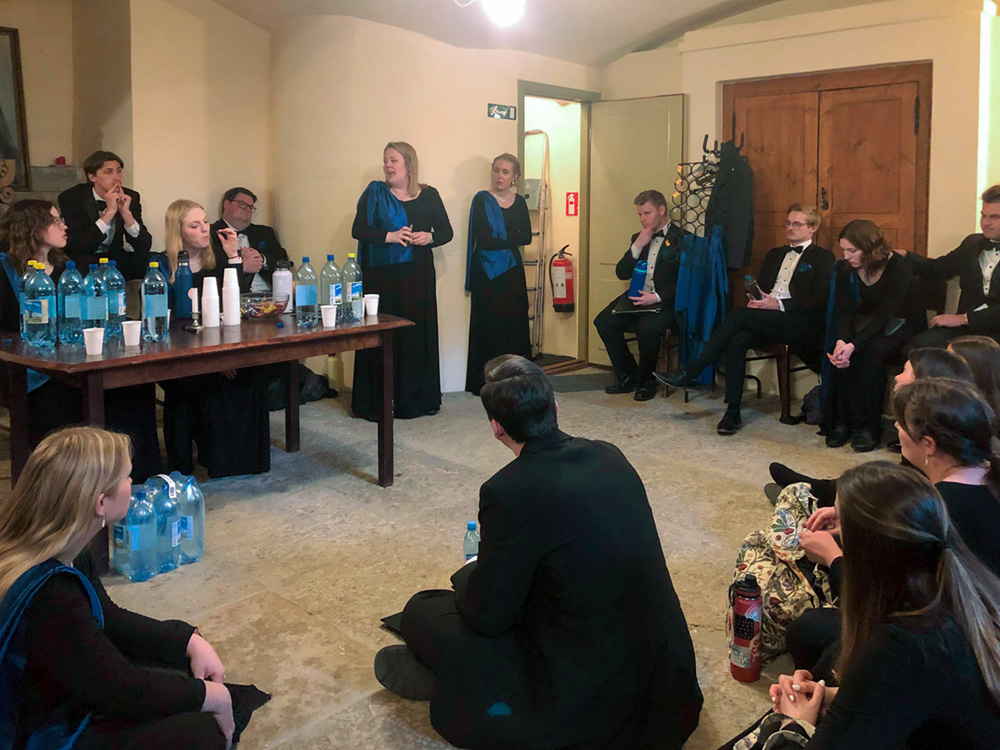 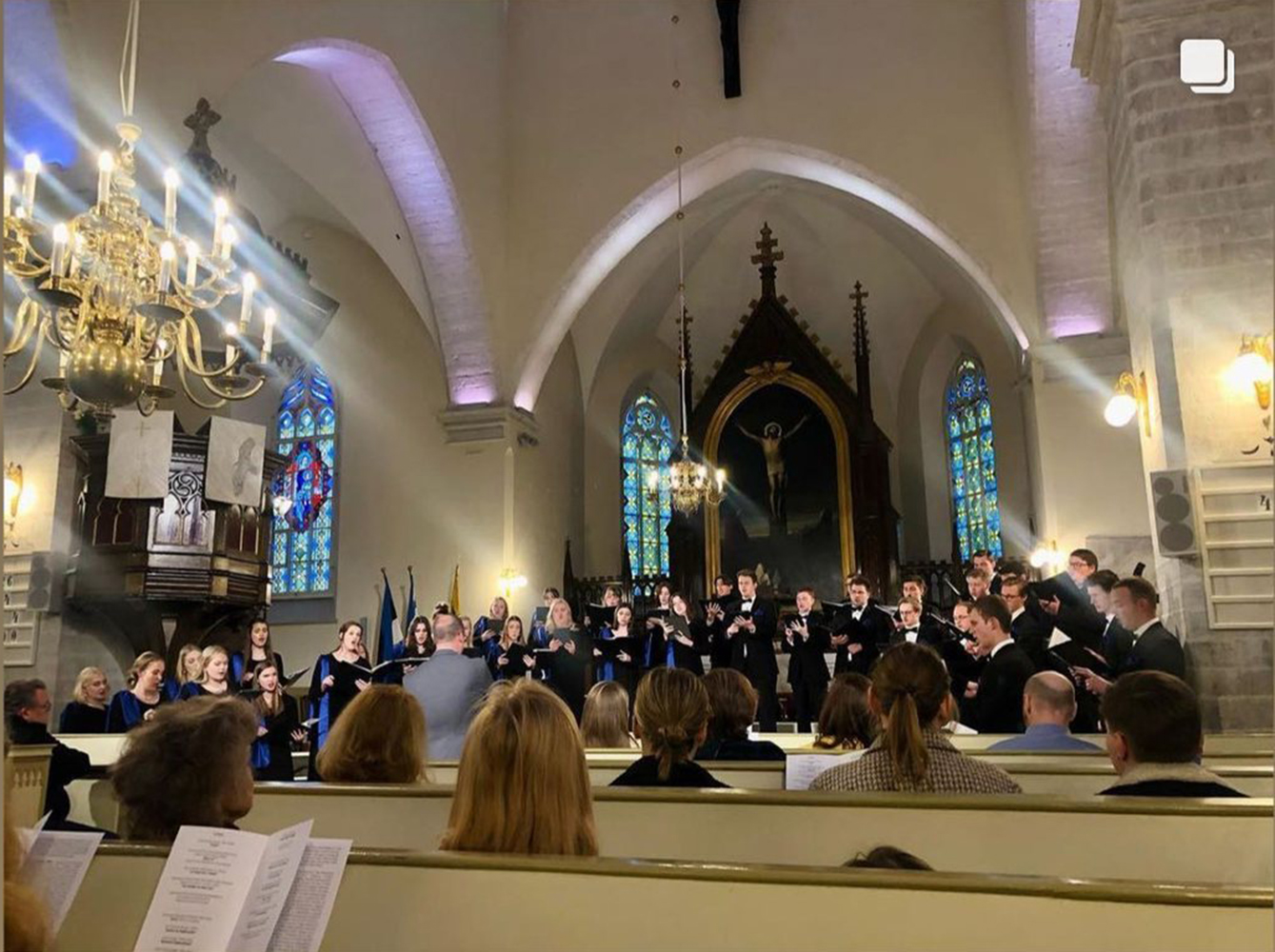 After their concert the choir was able to mingle with the audience; they especially enjoyed seeing new friends from Sunday’s church meetings and the Devotional Performance that same evening. Some of them brought gifts for Singers; one “grandma” adopted some of the Singers. Dr. Crane wore a beautiful stained glass heart pin that was made from glass from St John’s. Beautiful flowers were also given to Dr. Crane. Alex Keogh served his mission in Taiwan; he made a friend of a man from China at last Sunday’s concert, and that man came tonight bringing his friends from Turkey, China, Korea and Poland. Merileid also returned; she is a friend made on Sunday from the LDS Branch. 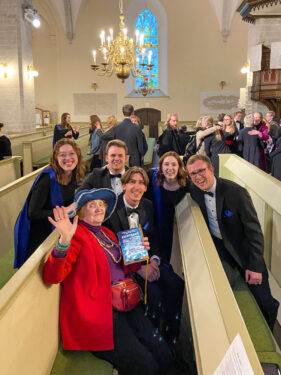 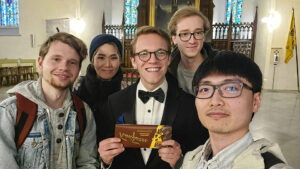 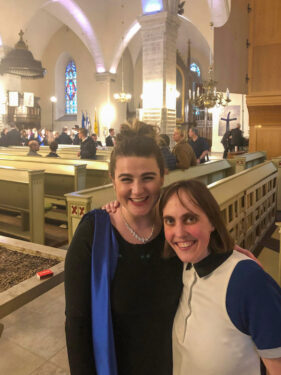 There was dinner after the concert with the HUIK Choir. The choir loved singing a concert again, and looks forward to another one in Taru tomorrow evening.

[Editor’s note: Nicole has completed her assignment as our blog liaison, and has passed the torch to our next correspondent. Brava for her hard work through jet lag and long days! We wish her good rest for the rest of tour. Also—in case you are wondering about Dr. Crane’s performing outfit, his luggage is off having its own adventure somewhere between Amsterdam and the Baltic States. He has figured out ways to get through tour, and fingers are crossed that he will one day be reunited with his suitcases.]