We checked out of our hotel early today for our 3-hour drive to Wuxi. It’s a bit of a jog in the itinerary, as we return tomorrow to the same hotel we just left. But once we got there we soon knew this was a very important and wonderful detour. Getting there, though…any of you reading this who remembers the roads and the buses in West Africa will appreciate my saying that the roads had many holes and bumps, and the buses had no shocks. It wasn’t a boring ride.

We arrived at the Canal Park Concert Hall with time to wander around a bit before lunch. Wuxi is a beautiful community with lovely trees and flowers lining the roads. We were originally slated to have our workshop and concert at this concert hall, but found out while on tour that the demand for tickets exceeded the hall’s capacity. Thus we were moved to a hall double the size. We stayed long enough for a good lunch of steamed mini bread loafs with a tasty meatball-like center, then drove to our hotel for check in and to grab our concert attire. 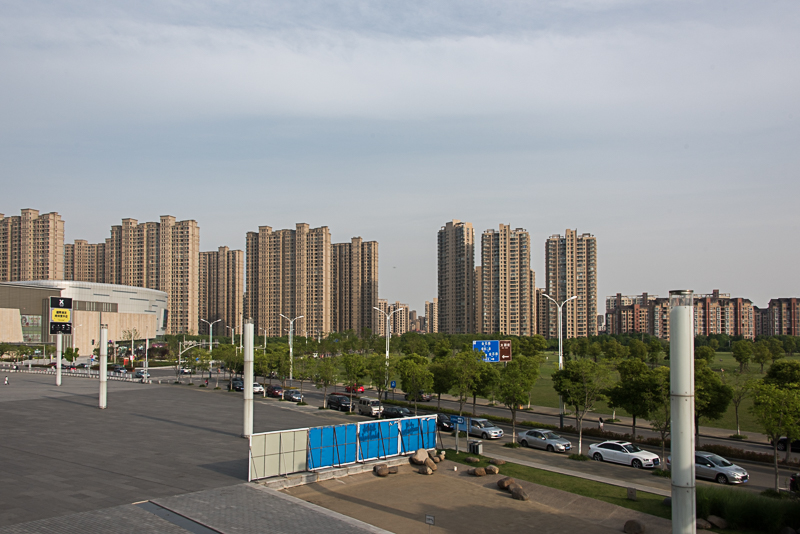 A group of high-rise condos such as those that are clustered thickly in every city we’ve visited. Thousands more are under construction. 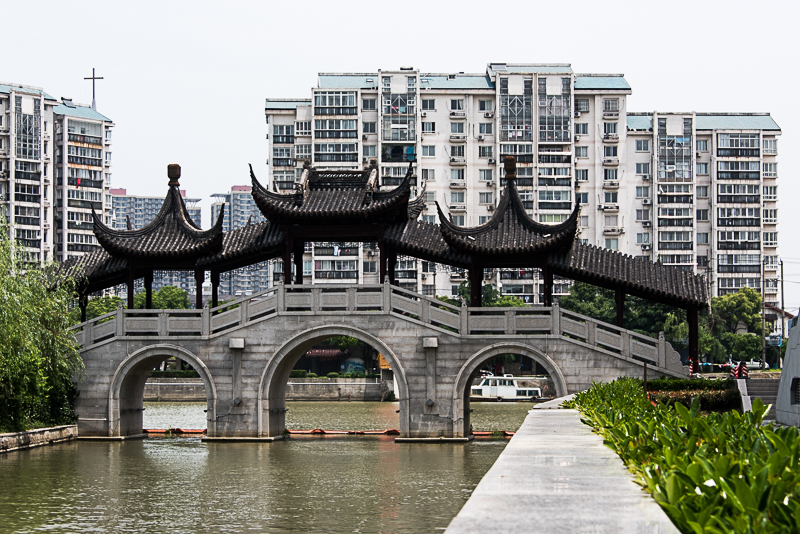 One of many examples of the mix of old and new in China.

As we drove to the Wuxi Grand Theatre Concert Hall, we began to realize that the wonderful building we had passed on the way into town was the new location of our concert. It has beautiful modern architecture that still pays homage to old China. It is huge, as all buildings here seem to be. 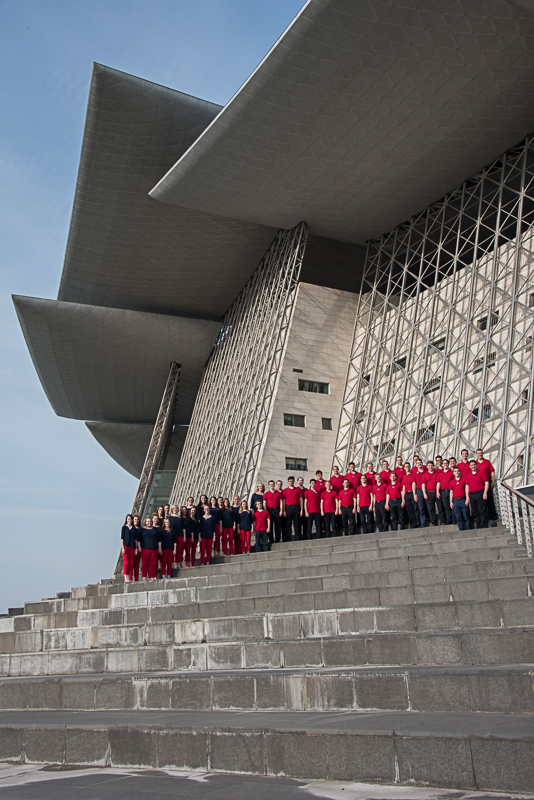 Outside the Wuxi Grand Theatre.

We dropped bread crumbs to find our way through the large hallways, and had a great Bruckner workshop with the Wuxi Shanhe Chorus. Dr. Staheli worked with this fine community choir three years ago, and many of the same members were singing today. Singers joined them in “Locus iste”; the choir was most responsive to all Dr. Staheli asked them to do. The Singers performed “Os justi” for them. The hall has fantastic sound, despite a very high ceiling with an almost-lattice covering that lets some sound escape. 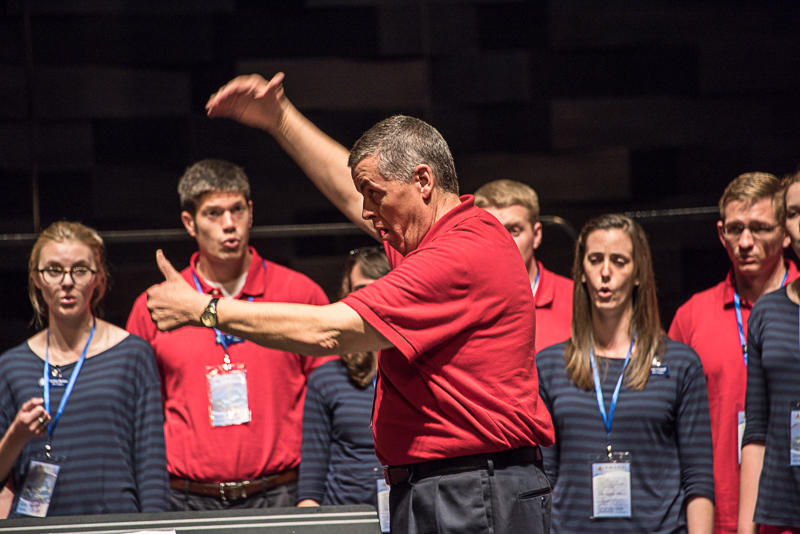 Demonstrating “up and over”. 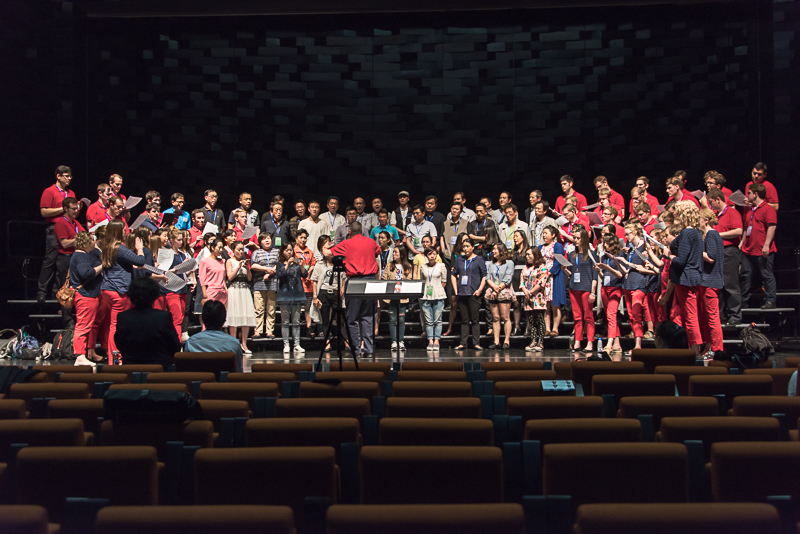 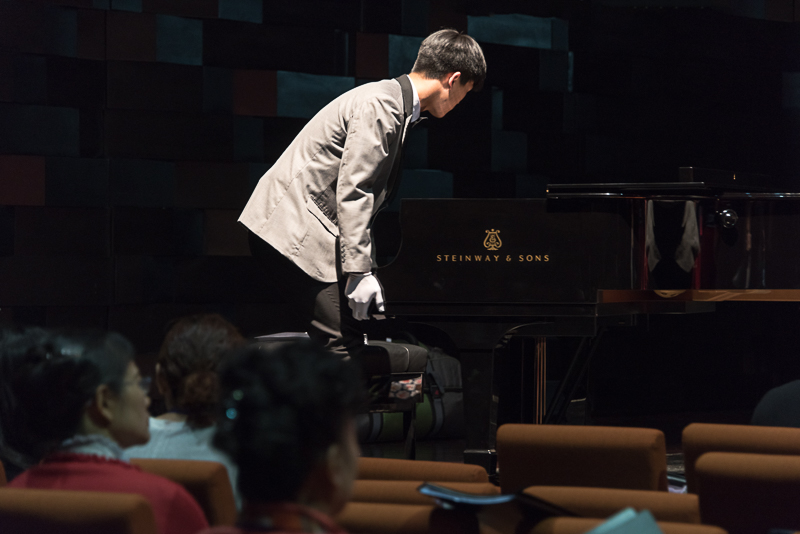 The ushers put on white gloves before moving the Steinway.

The concert was gorgeous, and the hall was just about full. Concerts are a fairly new idea in China, and the audiences (according to my source) are still figuring out some basic concepts of starting time and behavior once there. Nevertheless, they thoroughly enjoyed the concert, and responded especially enthusiastically to “Leonardo”, “Seinn o”, and the Chinese folk songs. 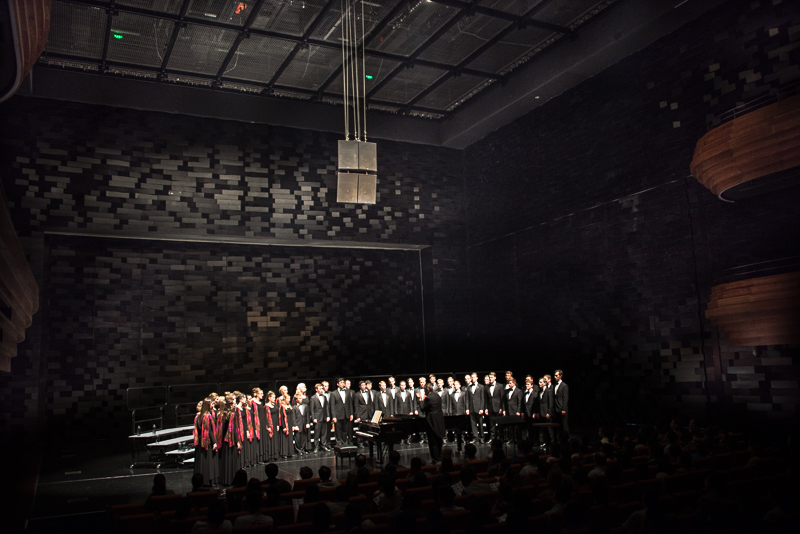 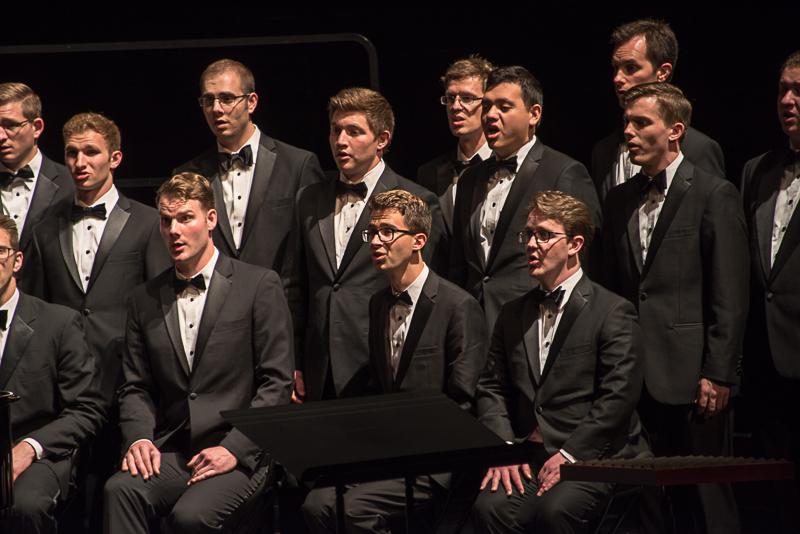 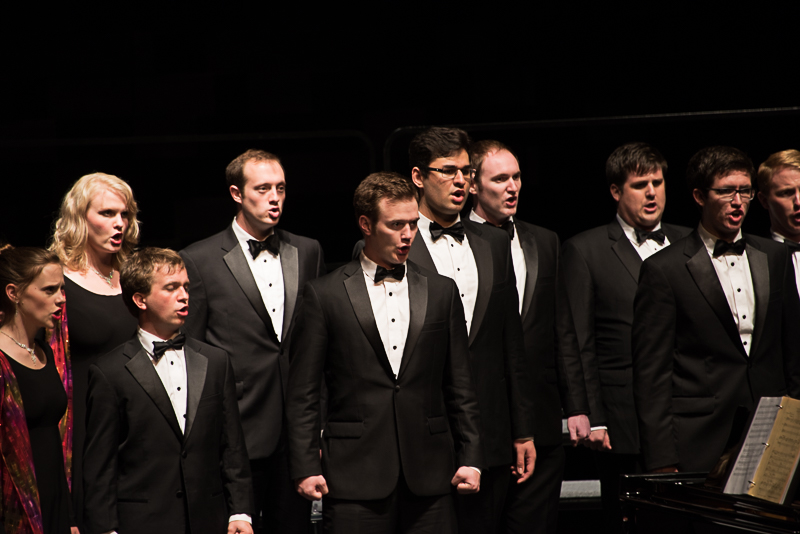 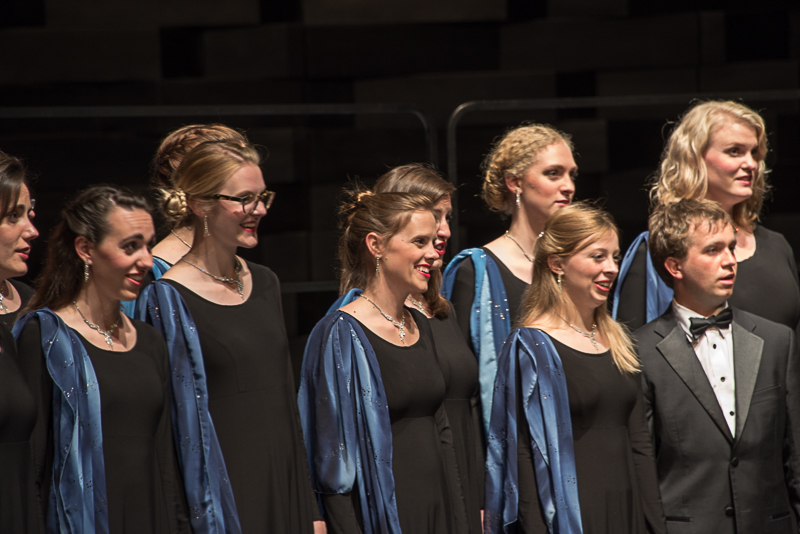 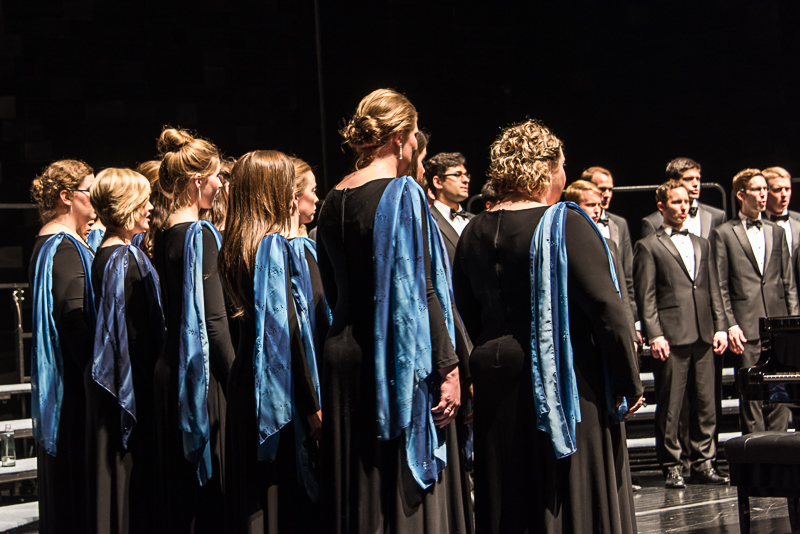 Our women’s hair is a little more elaborate when there is extra time before concerts.

They also enjoyed Josh Hendryx’s commentary throughout the concert; he has added much understanding for our audiences. We bid him farewell tomorrow as he heads home to be ready to get married next Saturday. We will miss him, but have Stephanie Buckley, another Chinese-speaking alumnus, here to get us through the final two concerts on Monday. We are grateful she could join us. 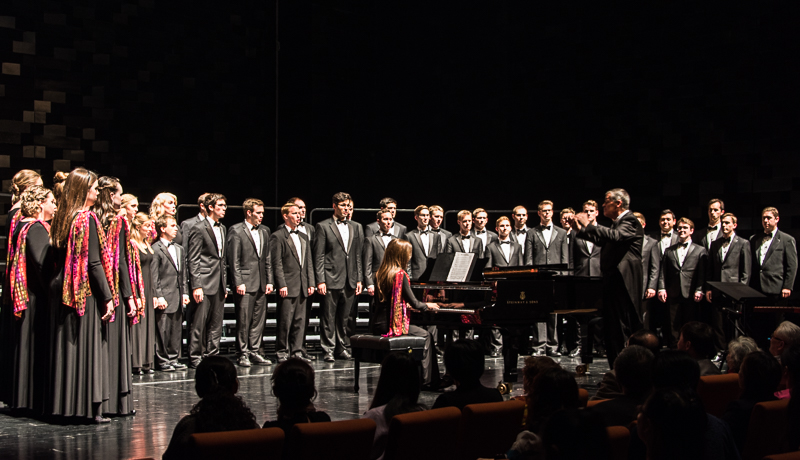 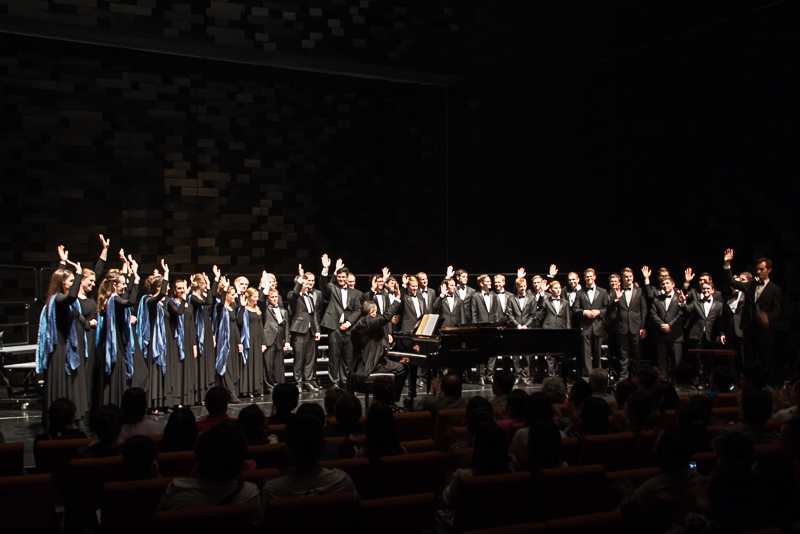 “How many Singers are music majors?”

We walked out of the concert hall to find this beautiful scene in front of us. This has been a very rewarding and successful day, and we are grateful to all who have helped make it so. 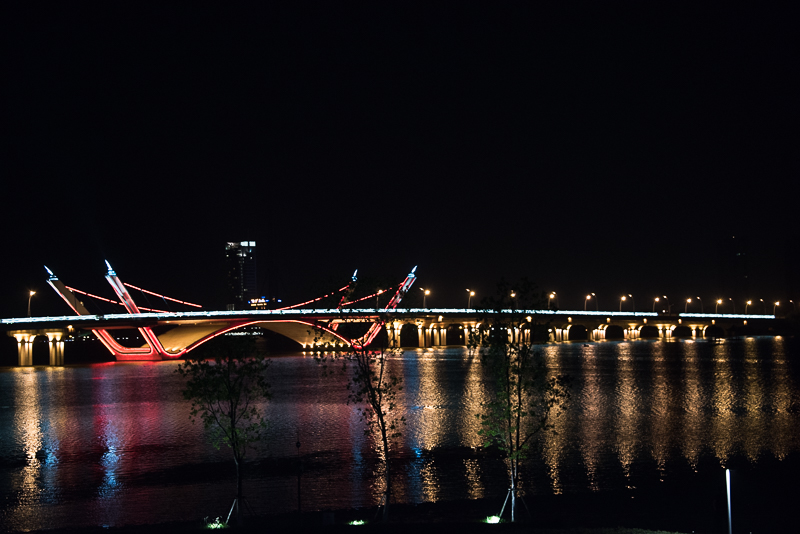