A new day after a full night’s sleep – just what the choir needed to have energy to head into our first complete day in London. We packed up the coach, said goodbye to the Umi Hotel until tour’s end, and headed for the changing of the guards at Buckingham Palace. It’s not easy to have a very good view, but we did our best. The crowds were large when we arrived, and it only continued to get more and more crowded. Just about everyone was reduced to holding their digital camera overhead and taking photos with more faith than focus. You may have to get out your magnifying glass, but there are men in red guarding and marching and doing all things military in front of the palace. Today the band played those old British favorites, “New York, New York” and “The Lady is a Tramp.” We’re not sure to whom they were playing, but our guess is that the special guests inside the gates were American. The queen was elsewhere, perhaps resting up for her big 60th anniversary of her coronation. 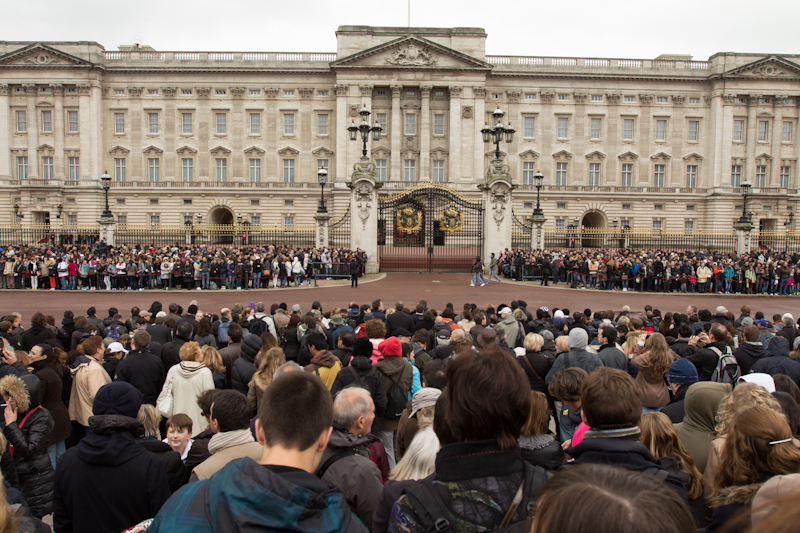 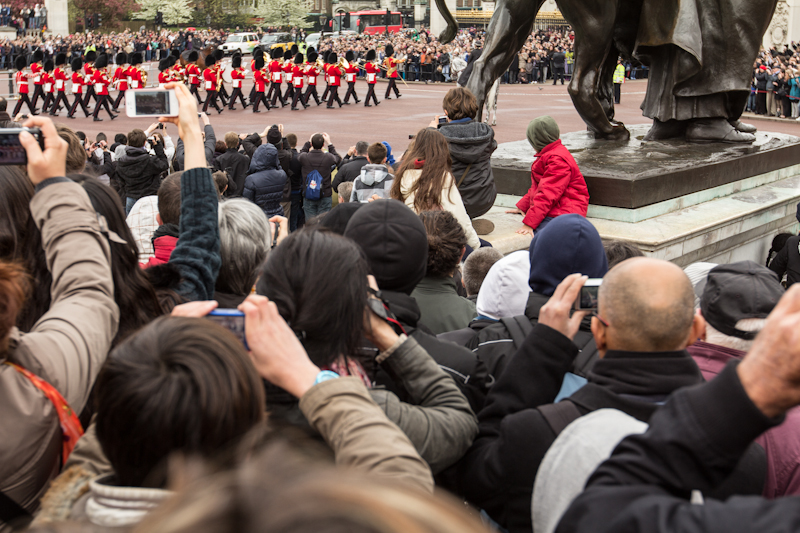 The photographer's challenge: other cameras (One of the marching bands) 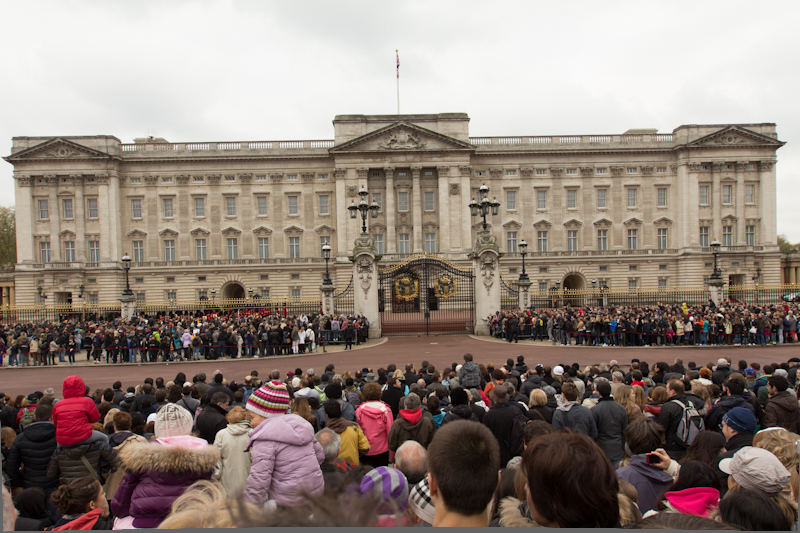 Can you see the soldiers in red up by the palace?

After that we were split into yesterday’s small groups, and turned loose to explore the area and find lunch. Some found the National Gallery (some incredible art in there!) some went as far as Covent Gardens, some toured Westminster Abbey, while others just wandered through St. James Park. Though we had thick clouds, it was warmer and less damp than last night. There were even some patches of blue sky if one looked fast! 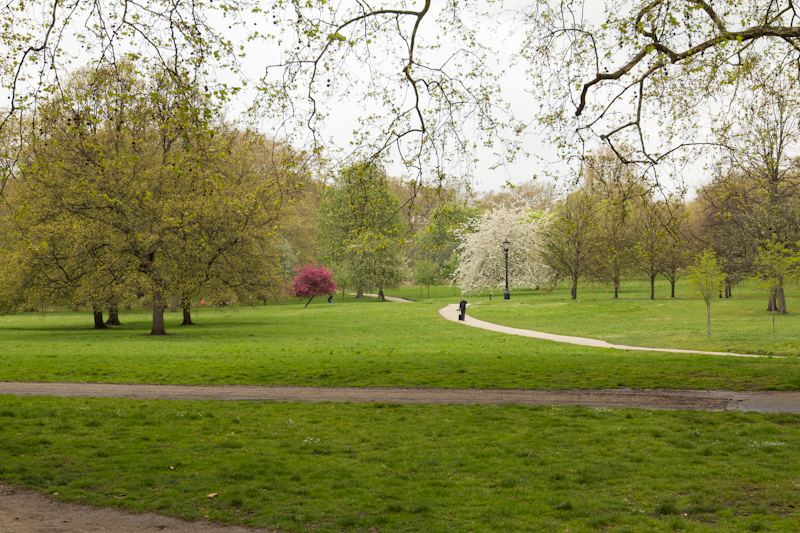 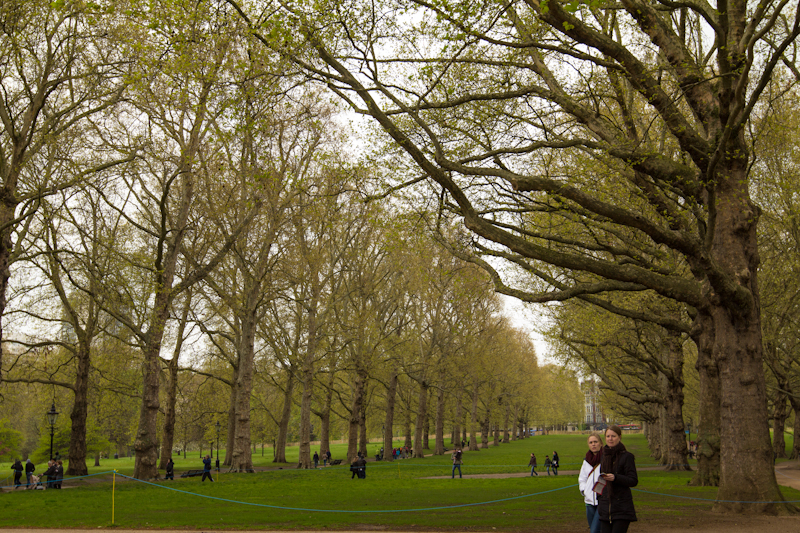 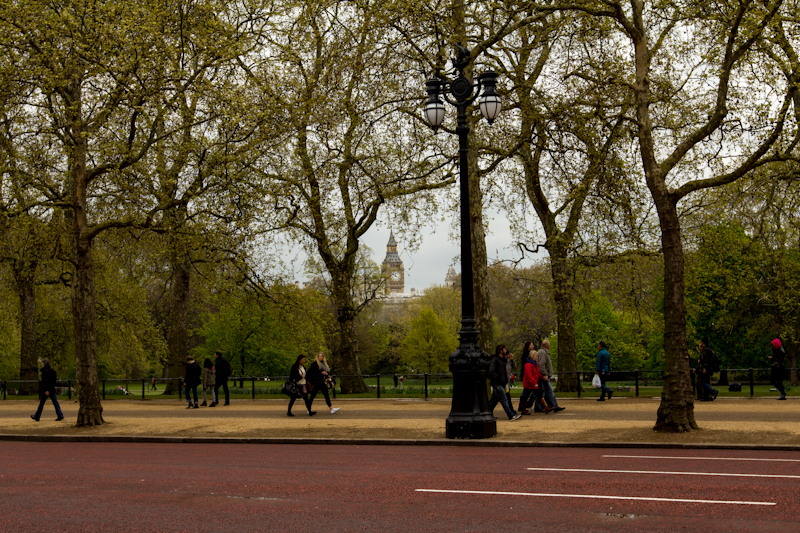 Big Ben through the park 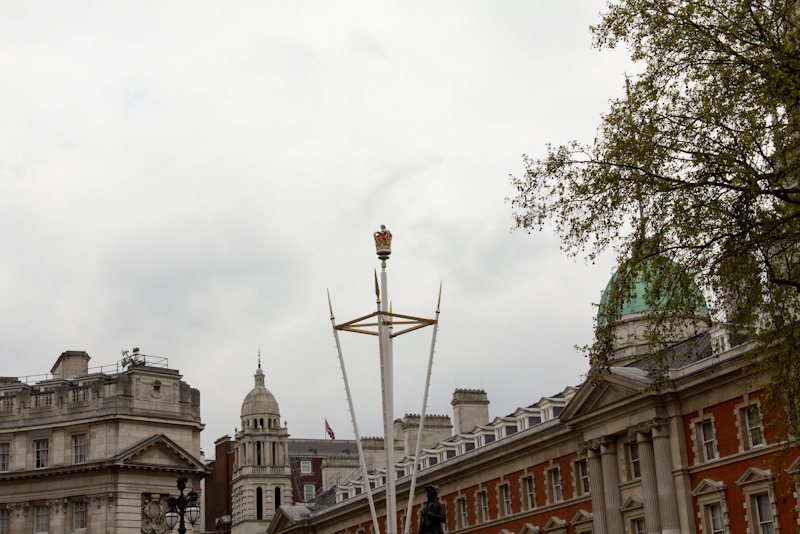 Stanchions with crowns line the mall leading to the palace 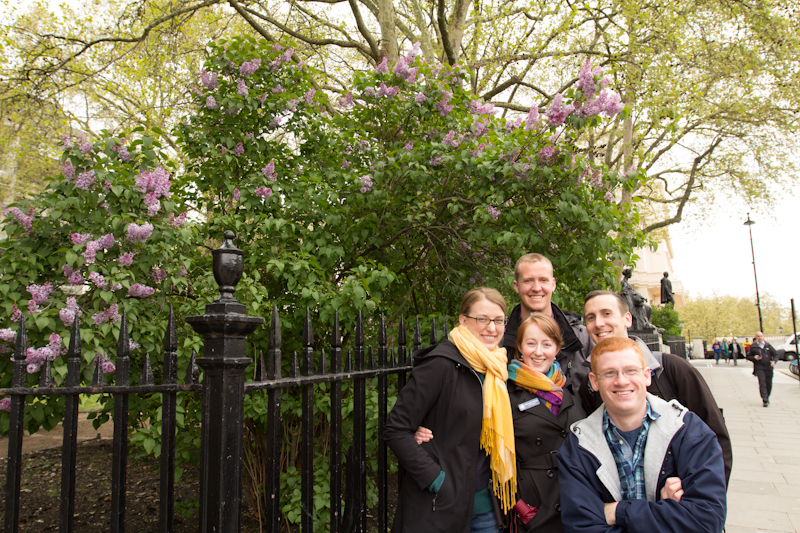 "Our" group with English lilacs 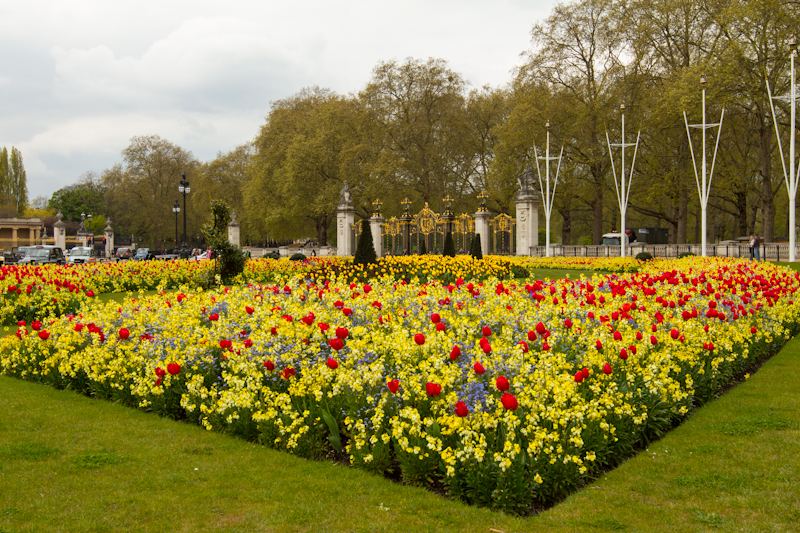 Gorgeous gardens across from the palace (more crowns on stanchions) 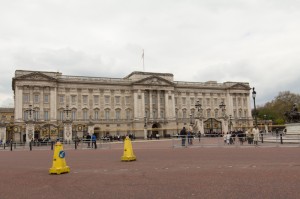 What a difference two hours makes...

Then back on the coach and off to Milton Keynes for our first concert. By miles, this town is only about 45 miles away from London. By coach, it was about a two-hour drive. But commuters can reach London by train in about 25 minutes. This is a town founded about 1960, so it is quite a contrast to much of what we saw in London. It is a lovely town, with many trees; in fact, it feels a bit like home in that the streets are laid out in a grid. AND the sun began emerging as the day progressed. We hope that is a trend and not a fluke. 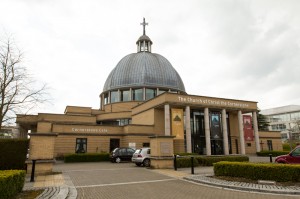 The Church of Christ the Cornerstone, Milton Keynes

We sang in The Church of Christ the Cornerstone, a beautiful church dedicated by Queen Elizabeth in 1992. Our first sponsors of the tour greeted us warmly, and the first measure of the rehearsal proved the sanctuary to have even better acoustics than we’d dreamed. It truly was a dream to sing there, and the choir sounded as if they had been in England a week and were fully recovered from jet-lag, not just a mere 30 hours or so. 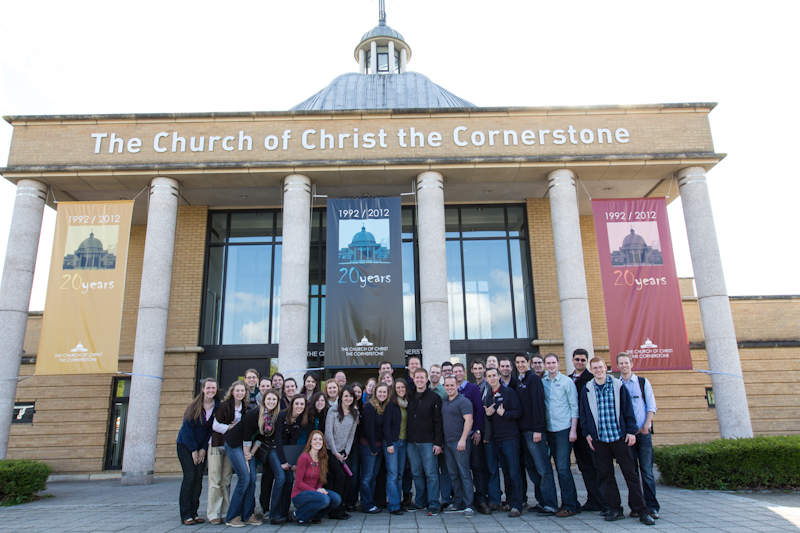 We had a delicious dinner at the LDS chapel nearby, and were back at the performance site by 7 p.m. The concert was just about sold out, and I could see how the audience loved it as I wandered about with my camera. (This concert benefitted Willen Hospice; just about every concert in this tour will benefit a local charity or organization.) They especially loved the surprise performance of “Jerusalem,” a great favorite in Britain. (If someone from a future concert is reading this, please don’t spoil the treat!) The almost in-the-round set-up made it a very intimate concert, with audience and choir really able to see each others’ faces. It is a treat to all when that happens, and a good rapport can be established immediately. The 90 minute concert was over so soon it took everyone by surprise, and tonight’s audience gave several heartfelt standing ovations. Singers sang what would have been a great concert any day – but this one was spectacular when you figure in jet-lag! We are excited to continue the tour. 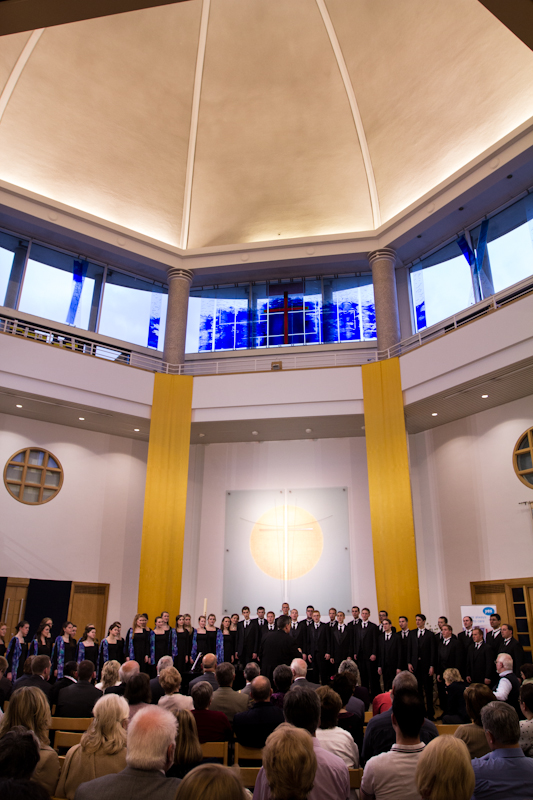 A rotunda added to the fine accoustics 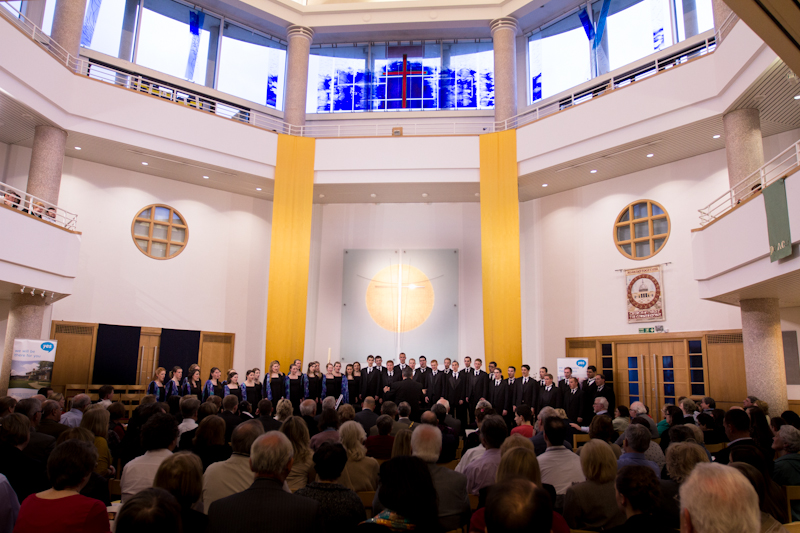 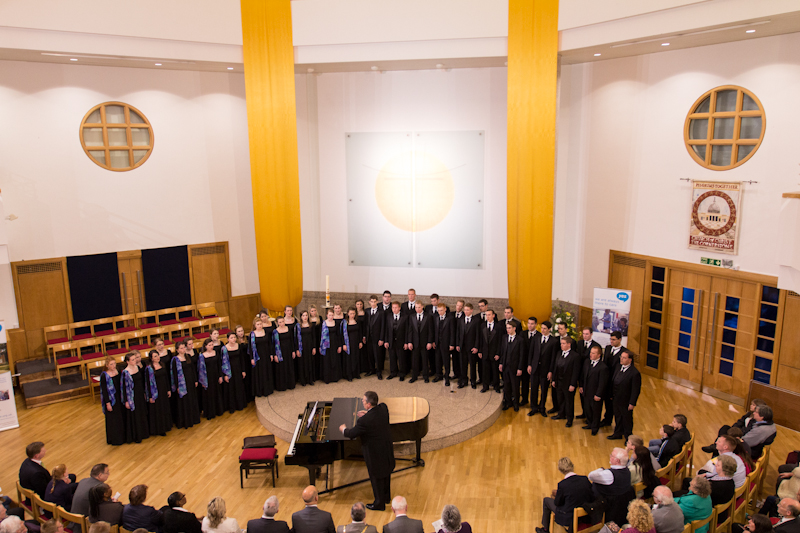 From the gallery upstairs 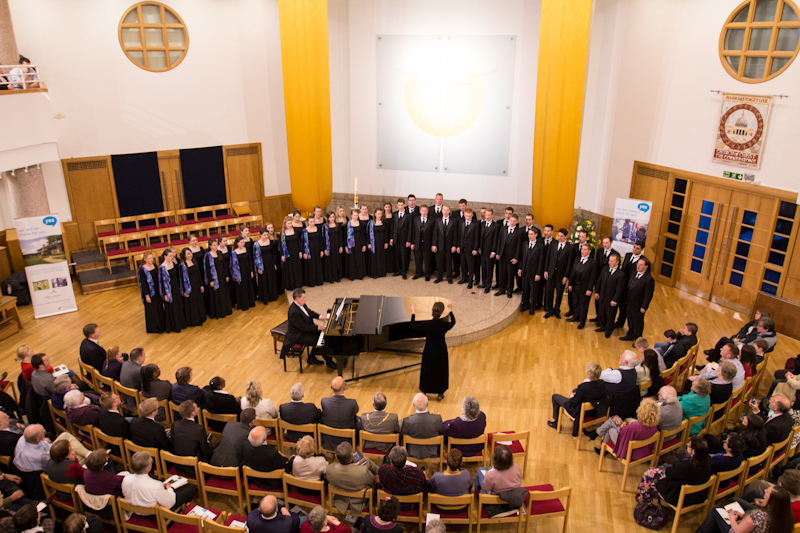 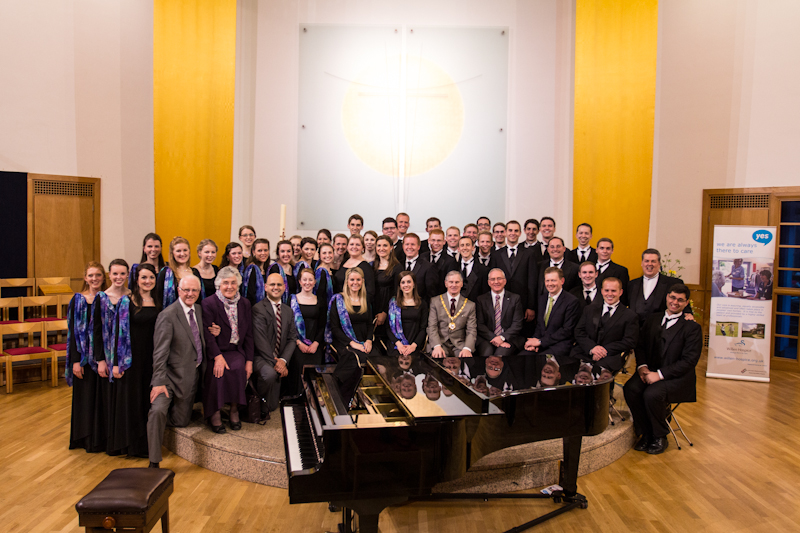 The choir is now home with their first host families, and tomorrow begins again early. I will try to let the photos tell a few more details of the day.