While most of the day was spent on the coach driving to Gloucester (pronounced “Glah-ster”) and many caught up on sleep most of the drive, we still looked out the windows occasionally to see all the fields of rapeseed – bright yellow – against the deep greens. The contrast is quite wonderful. Sadly, there has not yet been a chance to photograph any, even through the coach windows. They are too rain-spotted. Any of you on the Ireland tour will remember the beauty of it.

We arrived about 3, and were promptly turned loose to see this beautiful town and the incredible cathedral. There are lots of pedestrian streets in the city center, and more interesting stores than there was time. 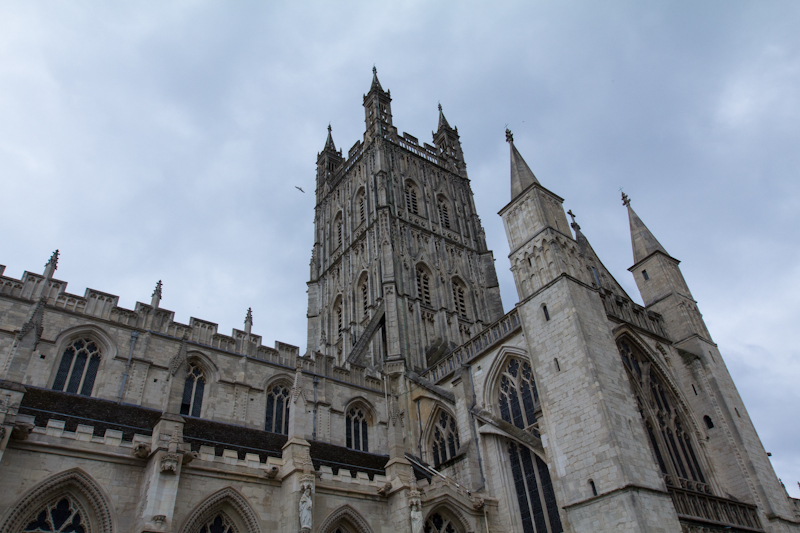 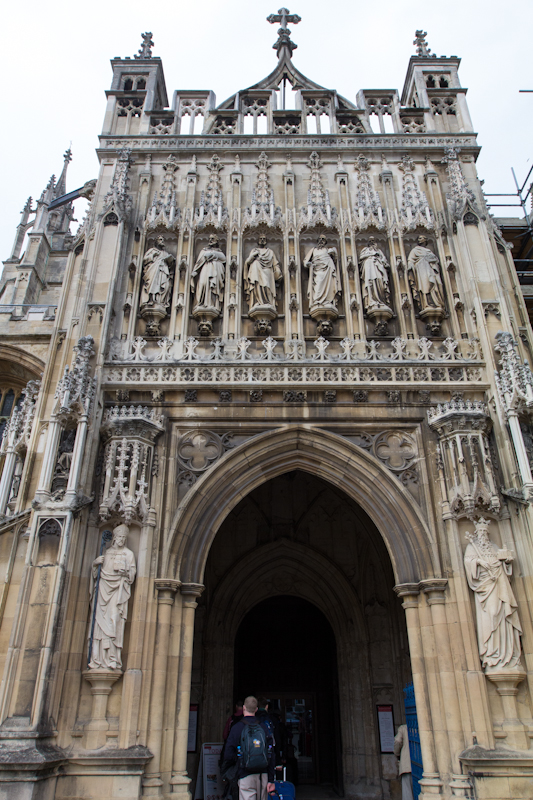 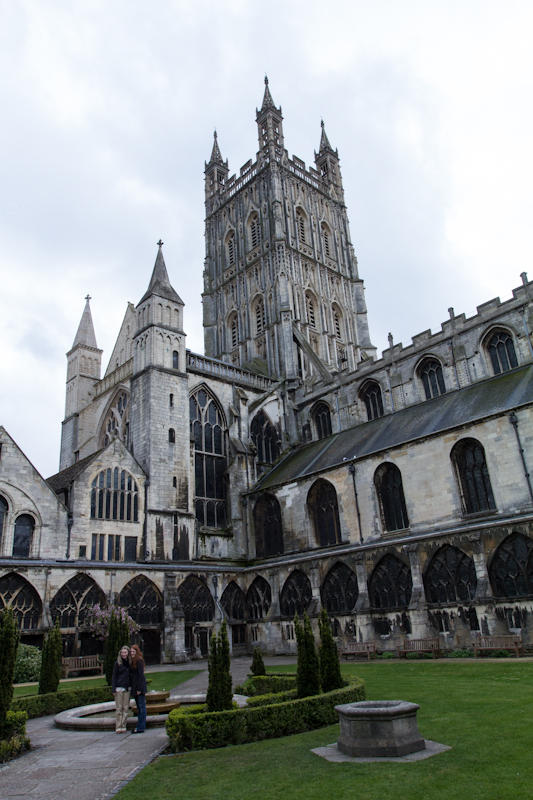 The cathedral took our breath away. It’s another Norman cathedral, built in 1100. It is immense and beautiful. It has the largest east window in England, but the scope of the building is such that it is hard to realize that the window is the size of two tennis courts across.  We were told by Ruth Eldredge, the choir’s own Anglophile, that the lovely stained glass windows were removed during World War II and boxed up for protection during all of the bombing. They carefully put the glass in boxes, labeled them with pen, and stored them in the crypt, which of course flooded and obliterated the labels. That left them with no easy way to identify all the tiny bits of glass when it came time to reassemble the windows. Someone finally came up with a postcard of the window, which saved the day. 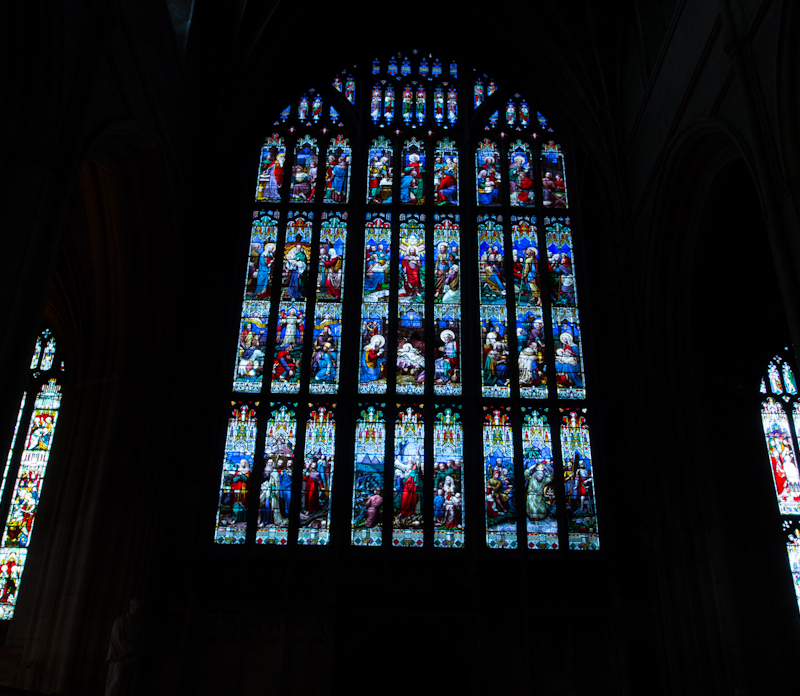 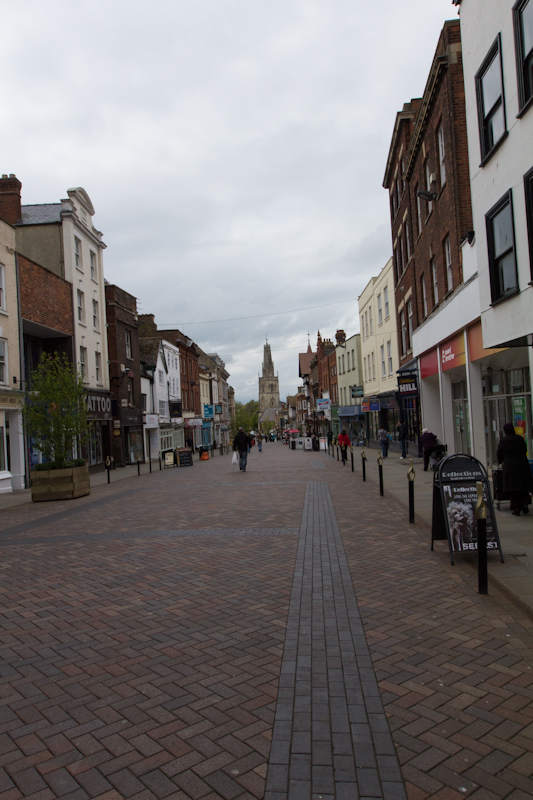 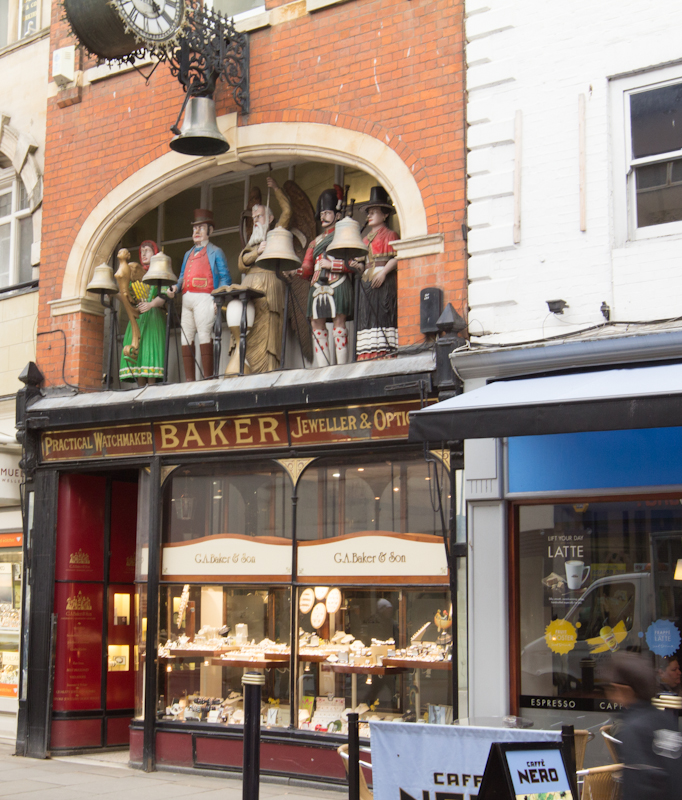 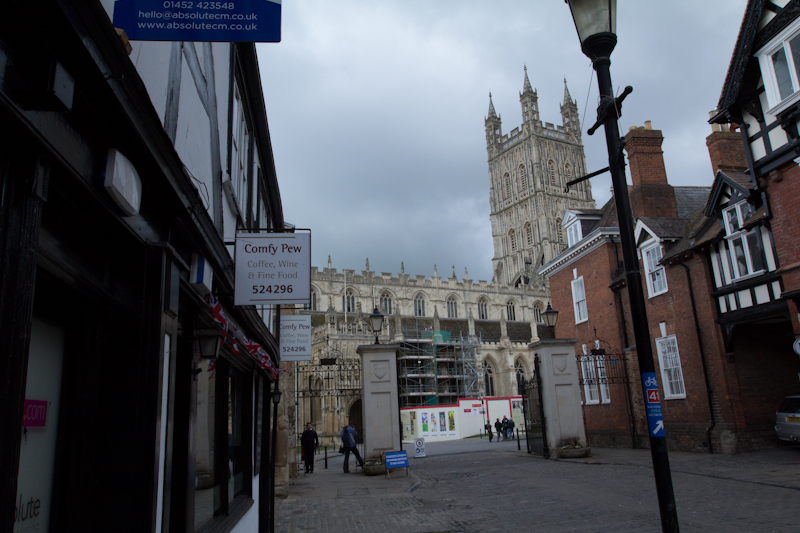 Cafe right next to cathedral (note the name)

The choir had a rehearsal to get used to the unbelievable acoustics of the cathedral, then went round the altar to watch about 20 minutes of the Gloucester Cathedral Choir rehearse for Evensong. This time it was the full choir, and the young boys were remarkably cute and talented, though one did get chastised twice for not paying close enough attention. There is such atmosphere when the choir seats are full of young boys and men in their choir robes, all the candles are lit, and then they sing. 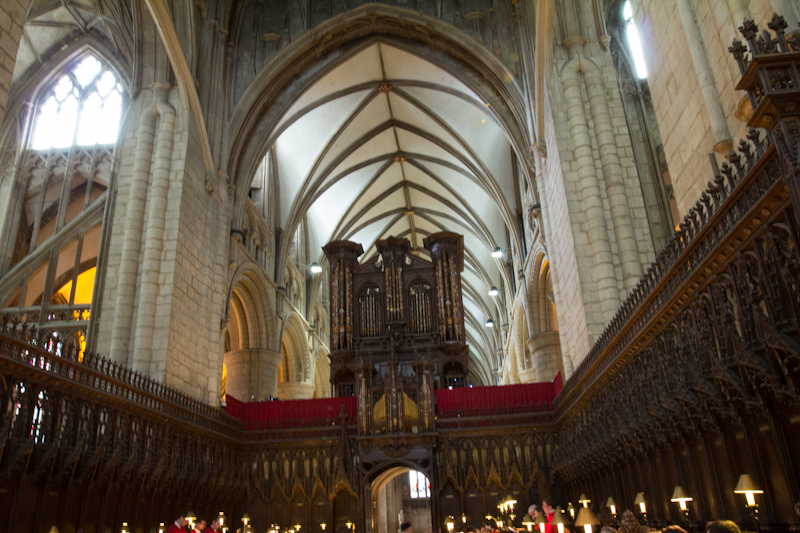 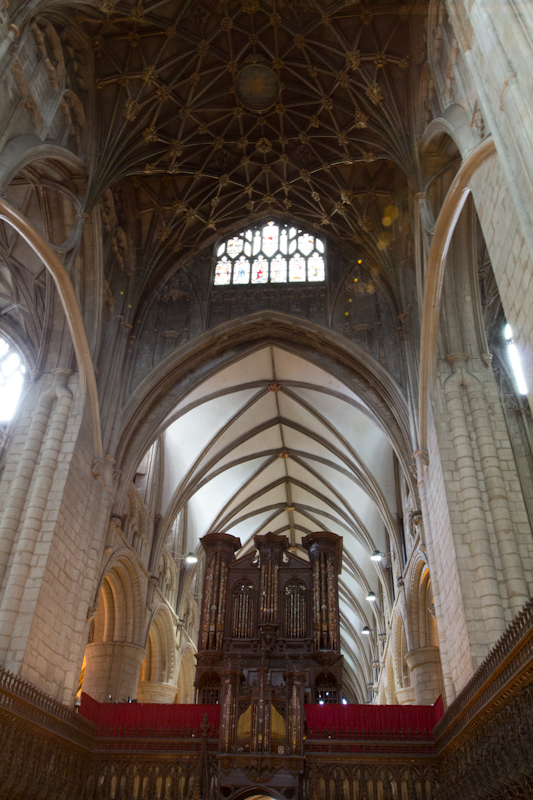 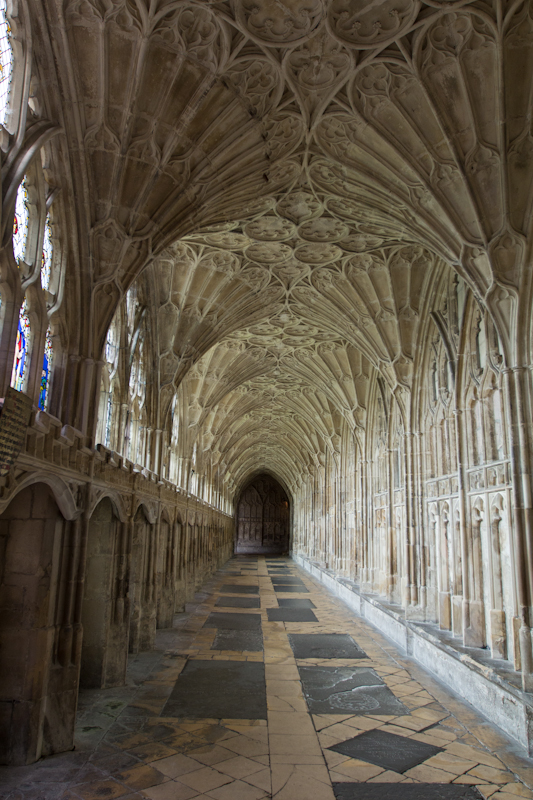 We walked over to the New Inn for a very tasty dinner of Yorkshire pudding and pork roast with all the trimmings. We have been treated so well in Gloucester! The choir returned to put on concert attire – just down the hall from the cloister that was used in several Harry Potter films. 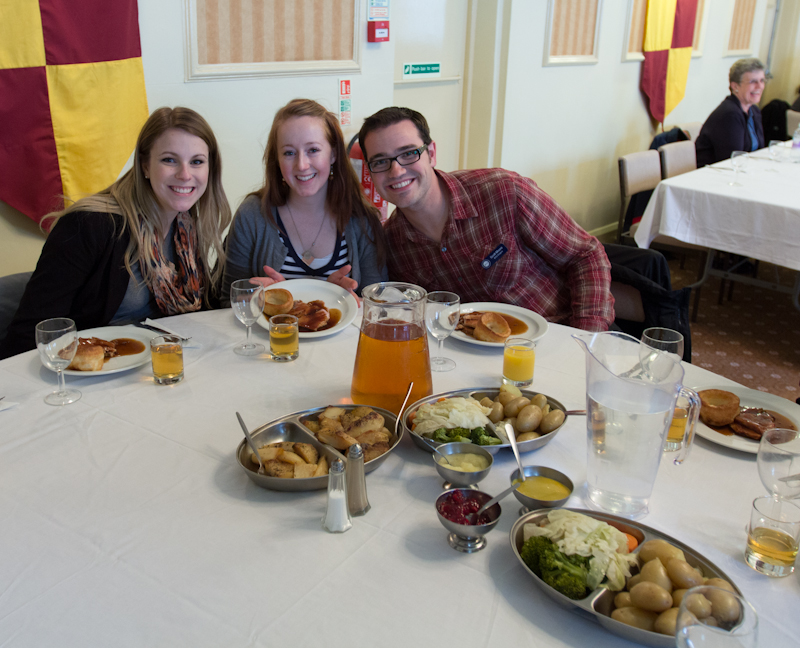 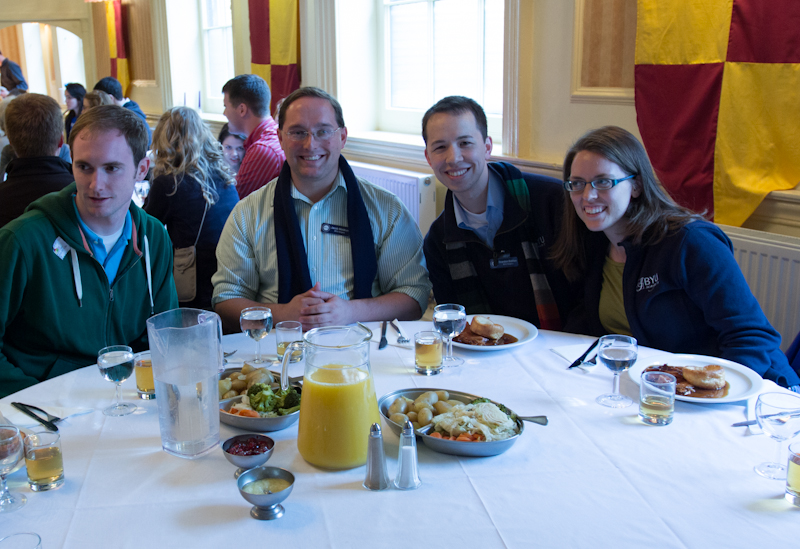 And then to the concert, which was stunning. Dr. Staheli chose the Renaissance pieces to open the concert, and they were so very beautiful in this setting. I’ve never heard “Water Night” or “Northern Lights” sung better. Every piece took on new luster in this performance. We had a full house, and they loved every piece. It really was a pleasure to sing for them. This concert was a benefit for the Cobalt Fund, which is raising money for a new medical scanner. 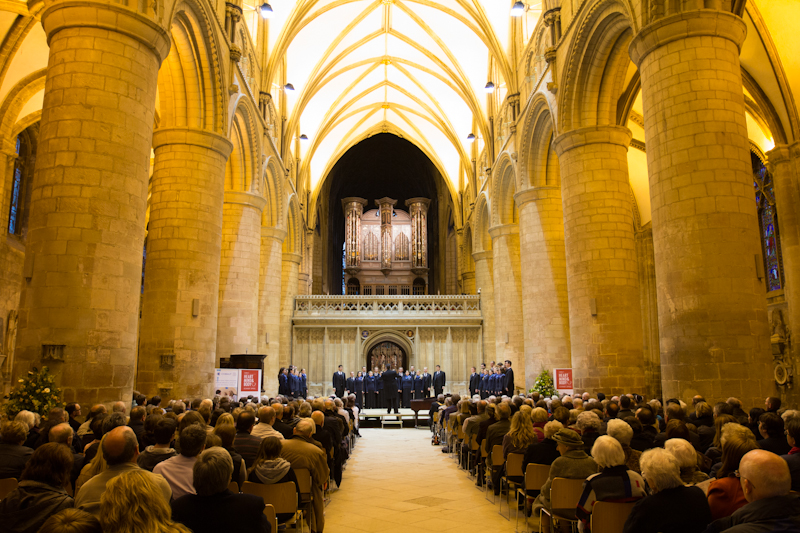 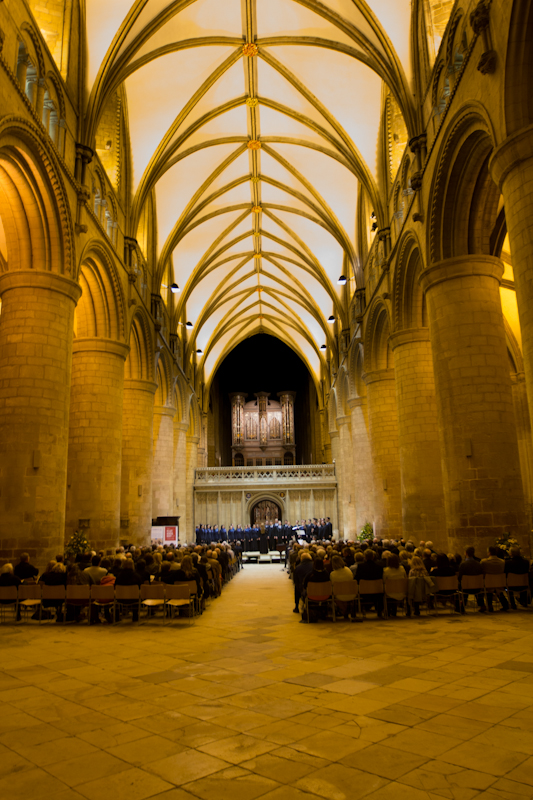 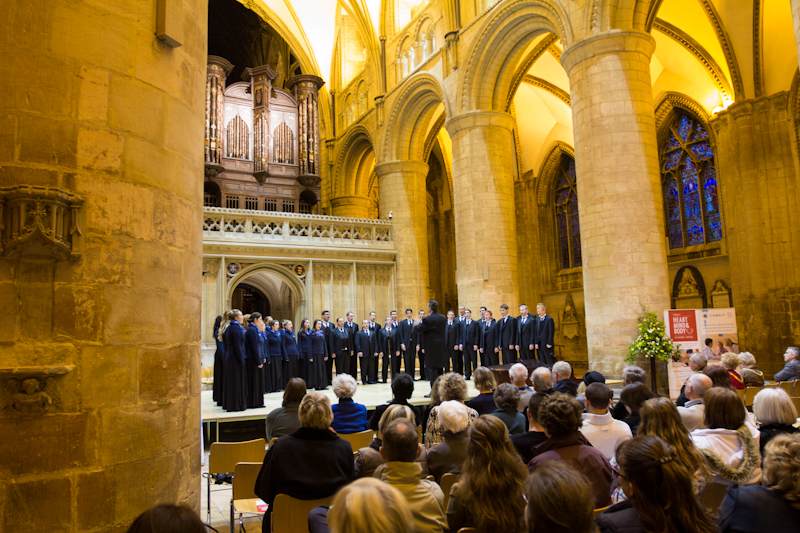 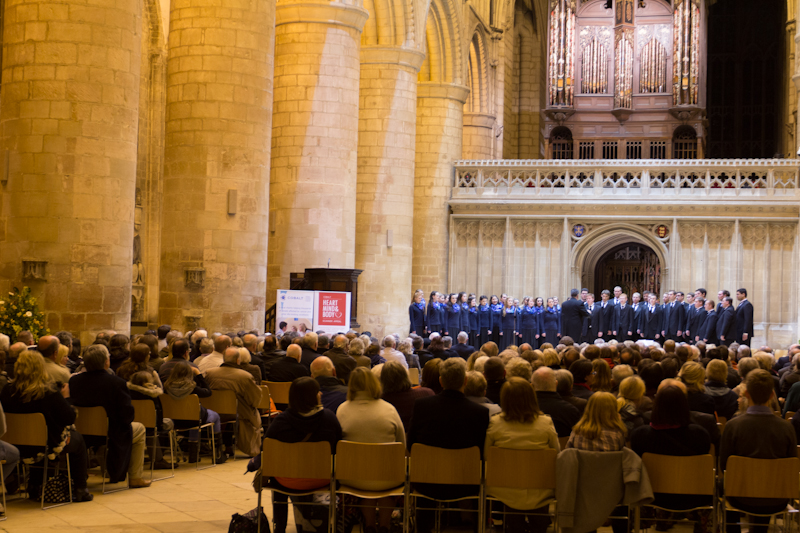 Of course, cathedrals lack central heating, and it was a chilly night tonight. After the opening number, Dr. Staheli explained that the women would be donning their Singers sweatshirts with their scarves over them to stay warm and healthy for the rest of the concerts they must sing here. It helped keep them toasty, even if their sense of style was slightly bruised. I don’t know how the townspeople who have worshiped here for the last 900 + years kept warm!

This was a night to remember. It is the first concert Singers have ever sung in a cathedral of such importance and beauty, and they rose to the occasion with their glorious concert! We are most grateful to the Cheltenham England Stake, who made this night possible. 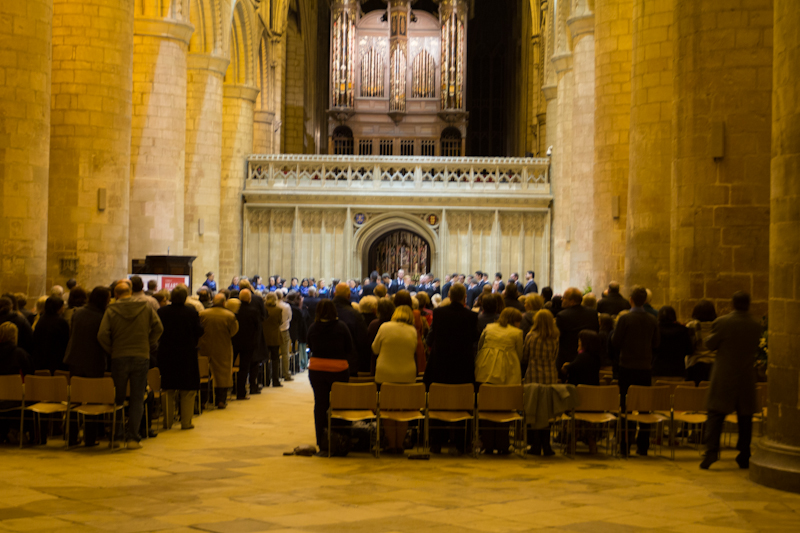