We left Provo Tuesday, April 28 on a beautiful spring morning. Despite all of the spouses and other loved ones having to be left behind, there was a true eagerness to begin this trip; so many months of work and rehearsal have been directed to these three weeks. We are ready to begin the adventure. 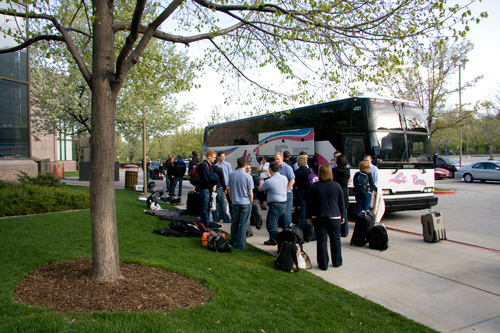 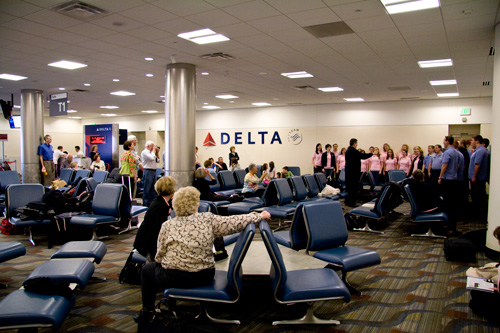 We were checked in at Delta in no time at all, and soon were on our flight to Atlanta. We wandered the airport to find food or just get exercise, and gathered before boarding to sing “Voice Dance” for a great group of travelers from a Southern Baptist church in Georgia who had made friends with many of us during the layover. They were also headed to Ireland.

I think most of the choir managed to get at least a few hours of sleep on our 8 hour flight to Dublin, but we were still a bit tired. No luggage was lost! Anyone who has traveled recently knows how rare that is. Once we had it, we found our bus and our very cheery Irish bus driver and director who kept us quite entertained through the four hour drive to Cork. We stopped at a little café for a good lunch where the owner spent about half an hour running 45 separate credit cards, as none of us had changed money yet. I think he was ready to see us go! 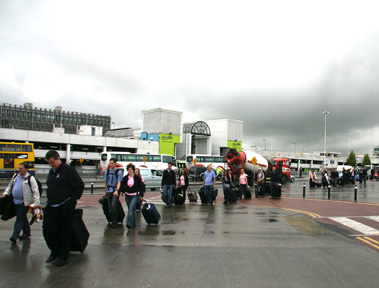 Trudging to our Irish bus at Dublin airport

This country is as beautiful as we ever thought it would be. The greens are so very green, and flowers are in bloom. There are gorse hedges and large bushes of it through all the fields and alongside the roads, which give brilliant spots of yellow. For all that it’s a weed, it’s a beautiful weed! Lots of rain this first day, but that’s fairly common for this country. They habitually carry their brolleys. 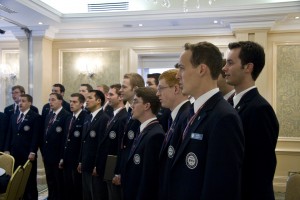 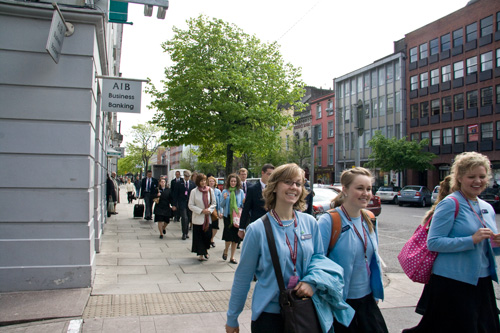 Walking to the library 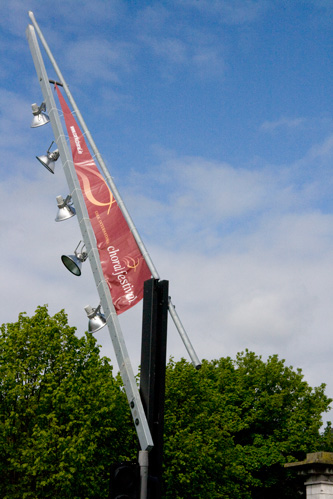 Banners everywhere for the festival.

We all stayed as awake as possible during the drive to Cork, and were pleased to find our hotel very centrally located. It is old and charming, with stairways going a different direction from a different hall on every floor. Sister Hall took many on a walk to show where to find some less expensive food at Marks and Spencer’s, and just to get a feel for the area. A few of us also found various ways to stay connected electronically with home.

We were on our own for dinner; my little group found a pub with wonderful Irish stew. It would have been delicious on any night, but was perfect for a drizzly spring evening. Sister Hall says that is a “soft day”—when there is just a gentle rain falling. Fits perfectly.

We are now caught up to today, Thursday, April 30. After a full night’s sleep, we were able to hit the ground running. There is a lovely buffet breakfast here at the Imperial Hotel, and that started the day with everyone in a good mood as the official part of the Cork International Choral Festival begins. We rehearsed this morning, and then walked a few blocks to sing a brief concert at the Cork City Library. The audience was most appreciative, even if we did interrupt a few who wanted to just check out their books! Then another walk to the City Hall, which is a beautiful old building, where the big competition will be held. A short concert there was more just the chance to get a feel for the sound and feel of the stage and concert hall. It is a good place to sing, and all are very excited for Saturday night’s concert. 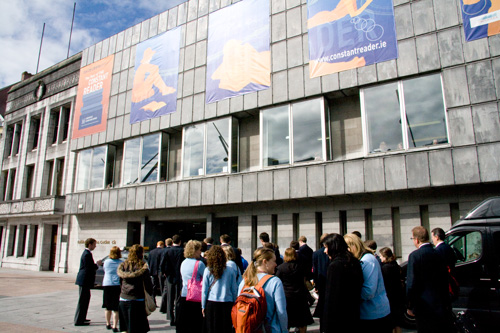 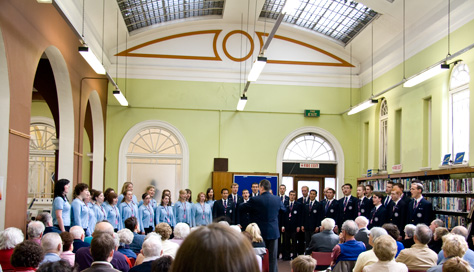 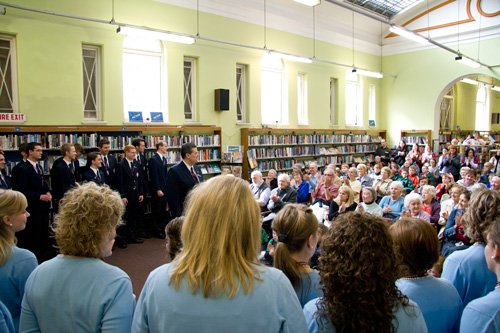 Some of the audience at library 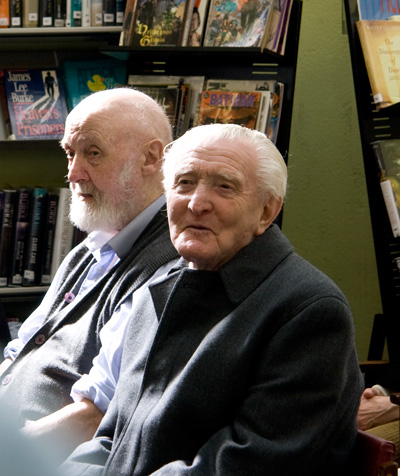 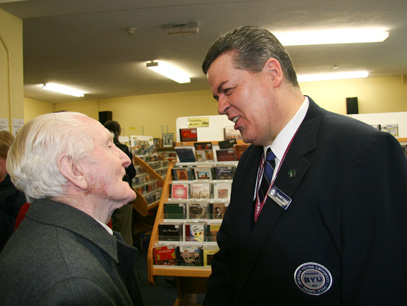 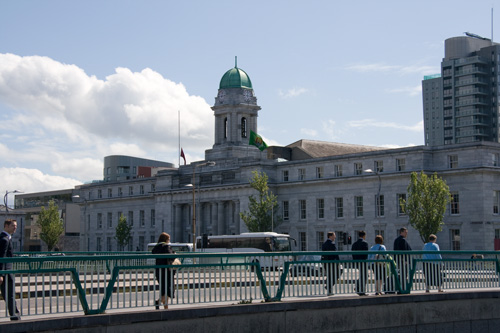 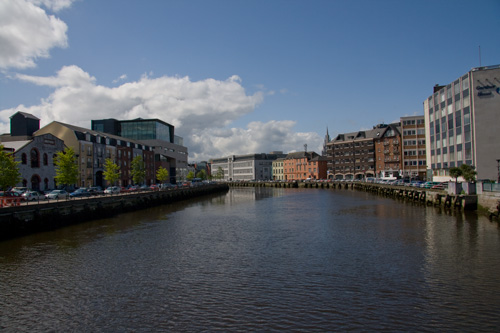 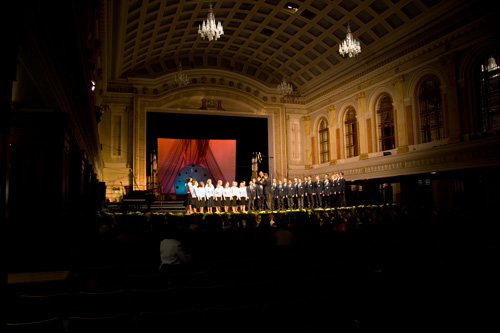 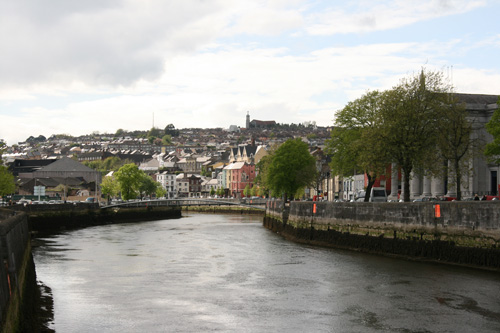 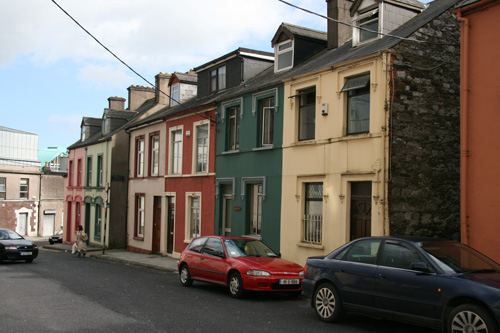 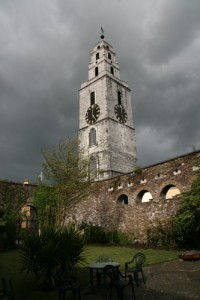 Another rehearsal this afternoon (the choir knows their music, never fear—this is for very fine tuning and to make sure jet lag has retreated) and another tonight, interspersed with a walk around the city and dinner. 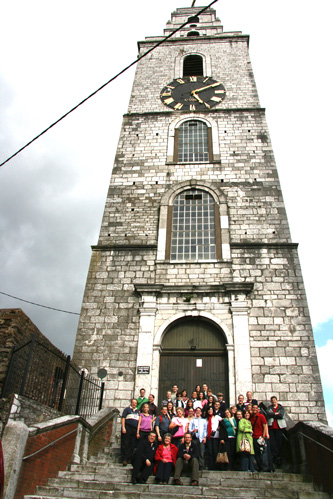 Some of the choir in front of same tower as above 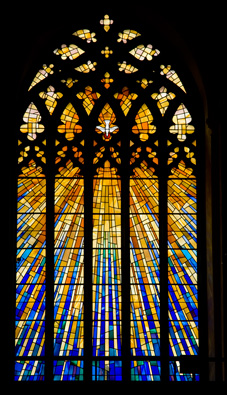 Window in a modern cathedral 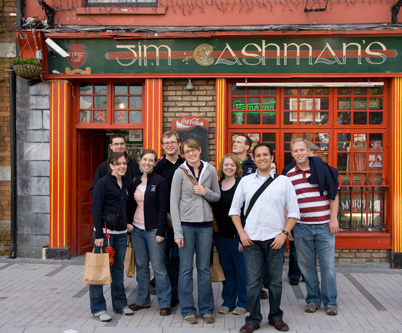 On the way back to our hotel

And this has been a wonderful, beautiful, DRY day in Cork. Not a drop of rain, and often bright blue skies. But even the clouds are moody and atmospheric. We love being here. 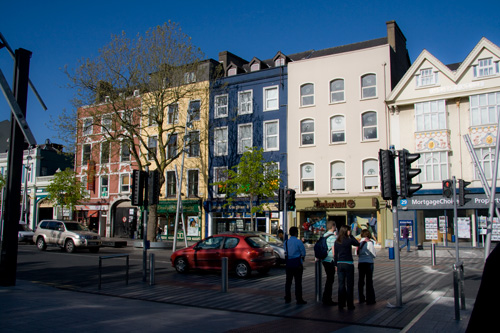 Look at the sky!!