Though Fast Sunday at home, on tour we must eat breakfast to get through the demands of the day. Had the scheduling permitted, we would have attended a meeting with a Cork ward. Their hours didn’t work with ours, so this morning began with a short but good sacrament meeting in our hotel. We wish we could have joined the LDS members in Cork, but we still found great unity in meeting just with ourselves, joining together in “Redeemer of Israel” and “I Stand All Amazed” a cappella with no conductor. We had time for a very few testimonies, then met our bus for a ride to the Church of the Real Presence away from the city center where our hotel is. 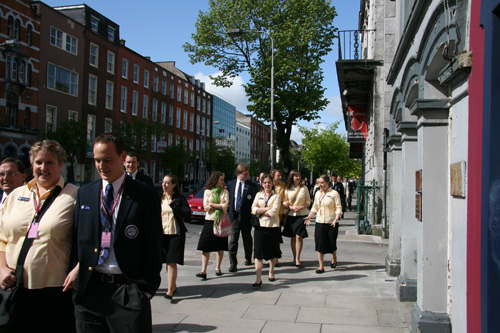 Walking to the bus 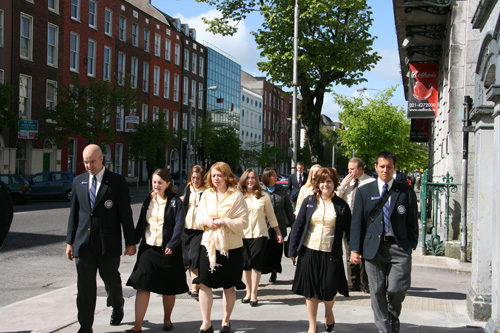 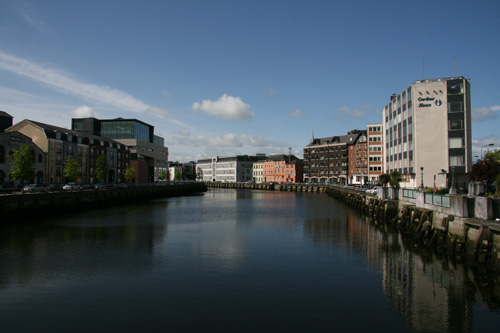 Car stopped for this shot 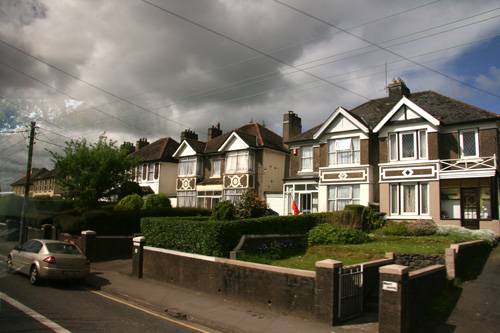 From the bus window

The choir sang five numbers during the Catholic Mass, which performance had been arranged as part of the choral festival. It was a wonderful worship service for all of us—those who attended and listened, and those who sang. 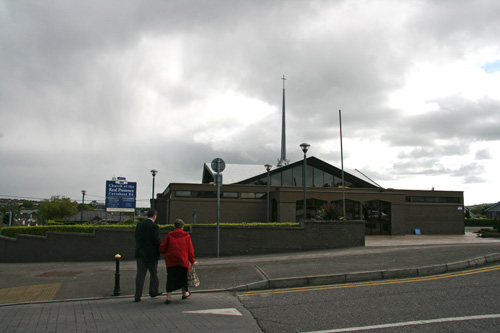 Church of the Real Presence 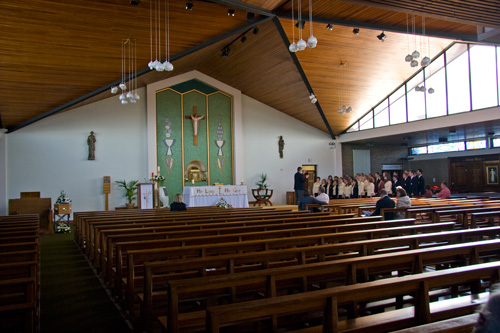 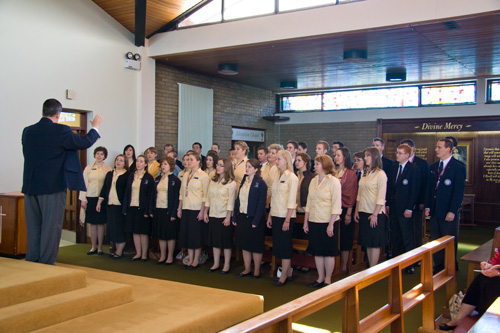 There was a warm feeling of family among the congregation, and we thoroughly enjoyed being with them. Such lovely people we are meeting on this tour. A car actually stopped and waited when the driver saw I was taking a photo of the scene across the street. I’ve never had that happen in my entire life, anywhere! A few Utah ties were discovered among the parishioners—it truly is a small world. 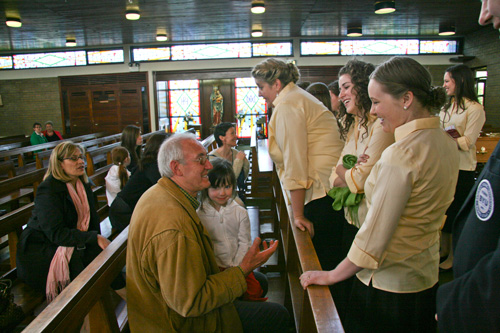 After the mass, we were invited to the library of the church to a totally homemade array of delightful sandwiches and scones, cakes, cookies, and all kinds of other goodies. That took care of lunch for most of us! We have been so thoroughly welcomed and loved and cared for in this country; and the tour is only 5 days old! 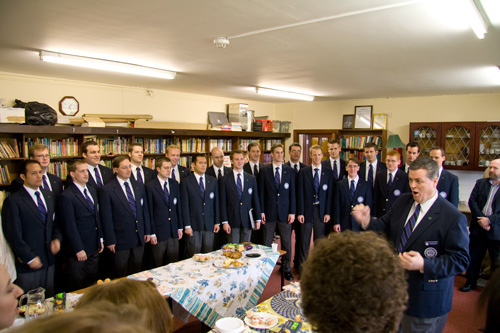 Singing for our hosts 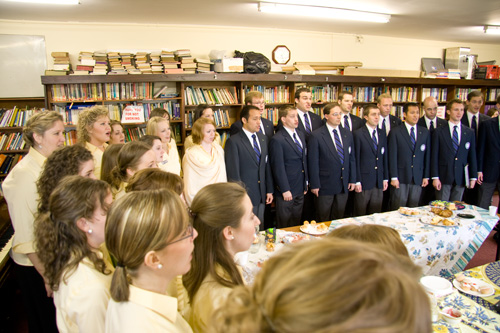 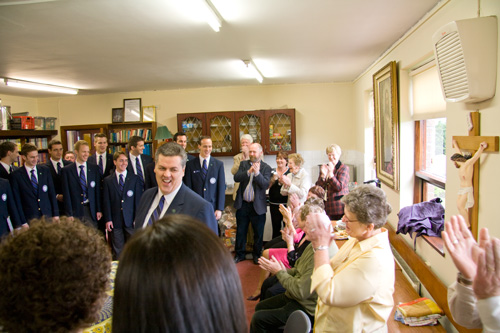 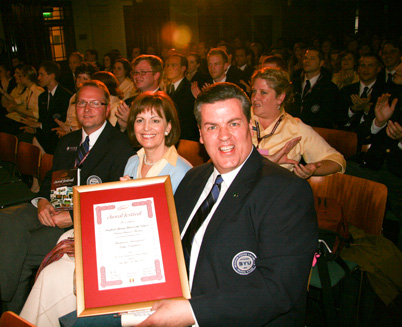 BYU Singers were awarded second place, just a snatch of a percentage point behind the winning German choir. I think many of us anticipated this result when the head adjudicator gave his introduction and spoke specifically of the trend he heard in the competition to emphasize very contemporary music. Our piece was contemporary, but more traditional in harmony and “language,” as this professor spoke of it. I don’t believe any of us are really surprised or even disappointed. 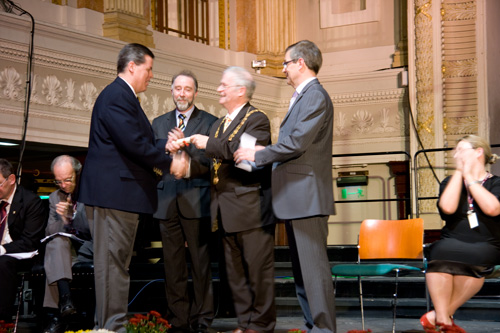 Congratulations by Lord Mayor of Cork

In fact, the special P.E.A.C.E. Trophy that was given to Dr. Staheli may actually be more important to us, as it was “awarded to the choir that, in the opinion of festival audiences, gives the most enjoyable performance of the Festival.” The festival director said it was going to the “choir that touched our hearts the most” as it sang in the festival and community. Since that is pretty much what we’re about, we were quite pleased. The trophy itself is a beautiful flat crystal bowl, made of Blarney crystal. 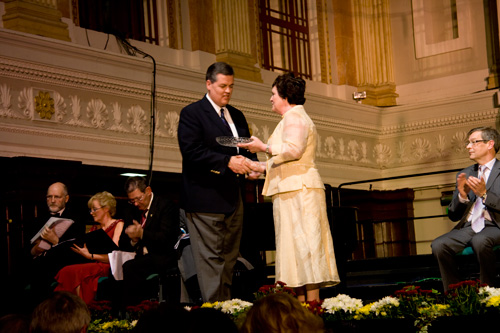 A very beautiful and talented choir of teenage girls from Norway won third place. I thought they might go through the floor with their stamping, and the roof with their screams of delight!

We ran back to the hotel to change into concert dress, grabbed something to eat on the way, and were back at city hall in an hour for the Gala Concert that ended the festival.

Lining up for entrance

Each of the eleven international choirs were to sing two “lighter” numbers, with a few speeches from dignitaries along the way. The music choices by these very diverse choirs were also quite eclectic. Ask a choir member to tell you about them; I won’t take the space here. 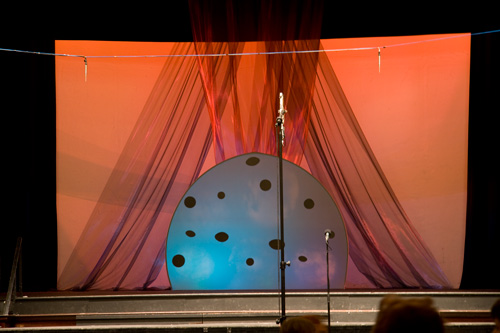 Dr. Staheli had chosen two pieces last October that were listed in the printed program, but after experiencing the festival, he decided today to sing “Leonardo Dreams of His Flying Machine” by Whitacre instead. After two hours of much lighter fare, we weren’t sure how this would be received. But a murmur went through the full audience when it was announced—Whitacre is obviously well known throughout the world now. We couldn’t perform the piece at the competition as it has the percussion accompaniment, and they required totally a cappella performances.

The choir came on the stage swiftly and purposefully; no meandering entrance for them. Dr. Staheli set the scene with a masterful introduction that was both inspiring and inspired. The Singers looked great, and took over the audience with the first phrase. They have not rehearsed this piece in a week, and some of you know how difficult it is. Nevertheless, they sang it wonderfully, and the audience just roared their approval at the end. If any photo looks a little shaky, it’s because so many were stamping the wooden floor around me to go along with their applause. This was the last choir piece of the evening, and was an incredible ending. It was the perfect piece to sing. 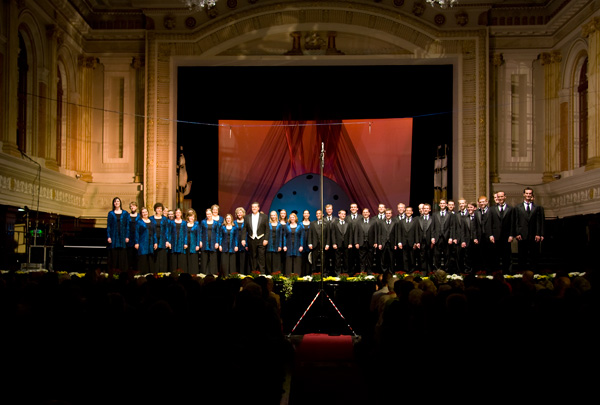 And now the festival is ended. We pack up tomorrow morning and head to our second town: Limerick. We are all looking forward to seeing more of this beautiful country. And we’ve had unprecedented weather thus far; a little rain every day, but nothing like what we had expected. Of course, that could just be ahead…