We began the morning with a quick tour that should have been quicker of the Constitutional Court. It was very interesting, and the hall itself as well as the grounds on which it was built is very symbolic of life after apartheid. The tour lasted a bit longer than scheduled, and that left us on the run to get to the 1 pm performance on the campus of the University of Johannesburg Arts Center. The choir changed quickly–some while the bus was in motion, some waited until we arrived (I’ll leave that to your imaginations) and the concert began on time. There was a small but very appreciative audience. Most of the choir who had taught us the South African songs our first day were there, and hosted the choir to a reception afterwards. Then back on the bus for another concert, this time at the Linder Auditorium at Witwatersrand University. It is a very beautiful concert hall that you’ll have to see later–your photographer/blogger took a photo format that cannot be emailed. (Update – photos now available below!) My apologies. The university is just down the street from the Johannesburg temple, so we were able to pose in front of the temple on our way to the area offices for a delicious light dinner. Good food seems to be a theme of this tour. The choir was very well received by a large audience–they demanded 2 encores and would have stayed for more. 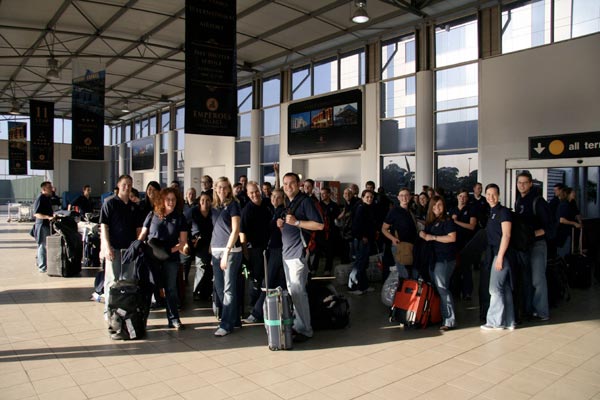 Arriving at the airport after a long, long flight 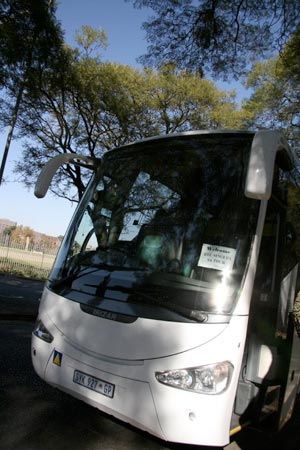 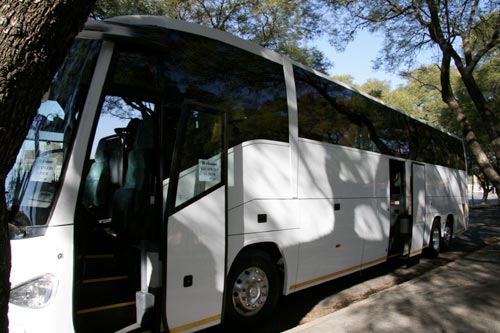 Our tour bus – home away from home 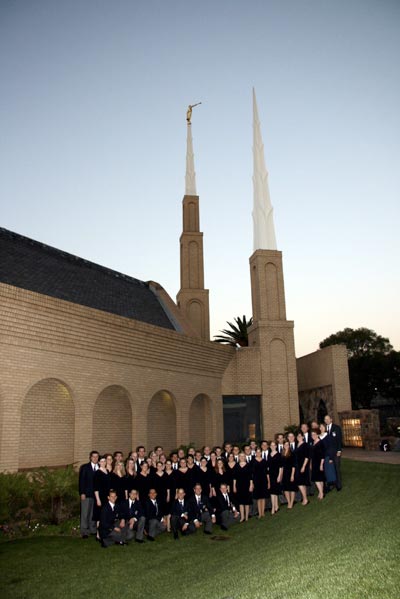 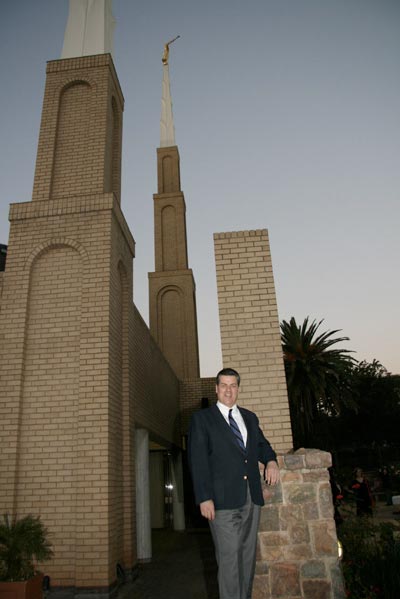 Singers and Dr. S at the Johannesburg South Africa Temple 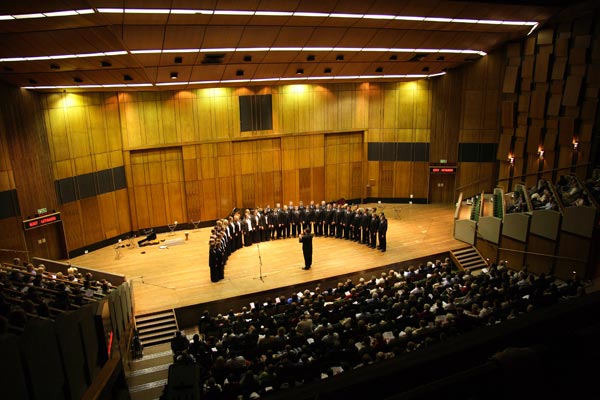 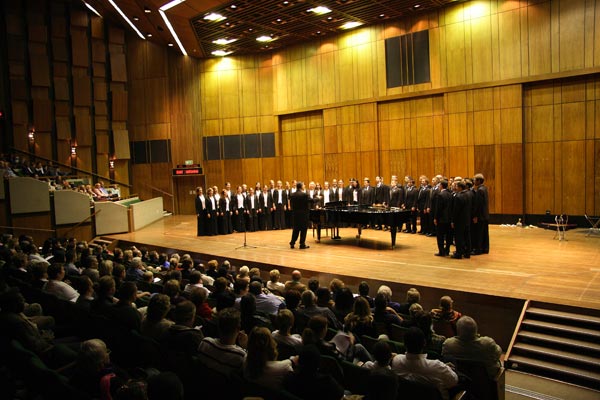 Today was an adventure, as we were able to go to Soweto. This is the township where many of the rallies and protests were held that ultimately led to the end of apartheid. We visited a memorial that told the story of Hector Pitersen (I’ll let you all look him up) and also toured Nelson Mandela’s home, which has now been turned into a museum. Drove by Bishop Tutu’s home, which is landscaped far better than my own. The ground here is very, very fertile and the trees and foliage lush. Trees and shrubbery bloom just about year round. 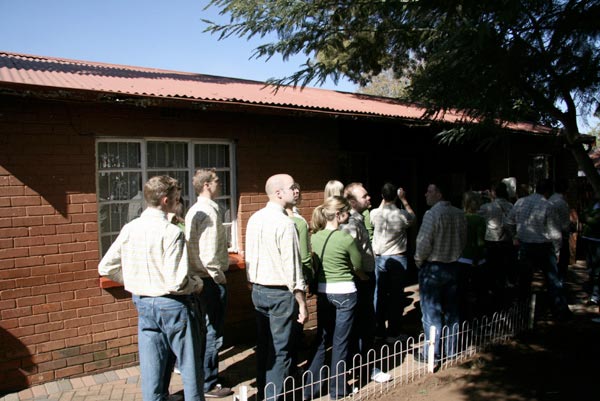 Outside the Nelson Mandela Museum 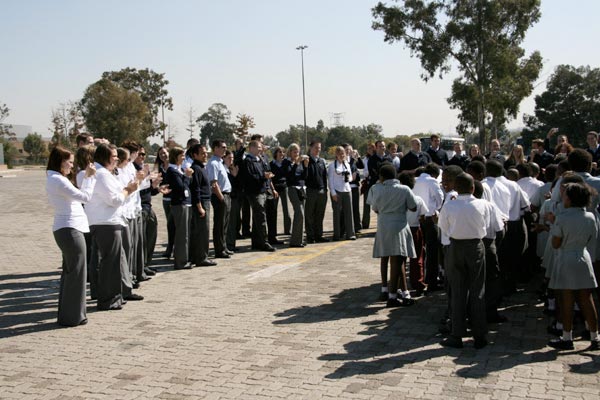 Children singing outside the Apartheid Museum

Our lunch was at Nabeta Beverly Hills restaurant, which doesn’t look a bit like its namesake in California. Delicious food, although we were a bit thrown by the tripe. Few of us were intrepid enough to finish what we had inadvertently taken. 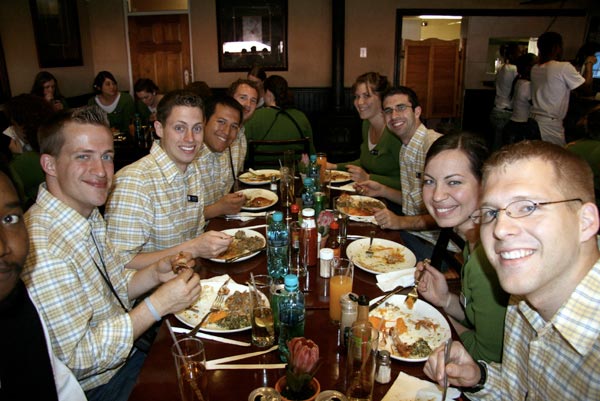 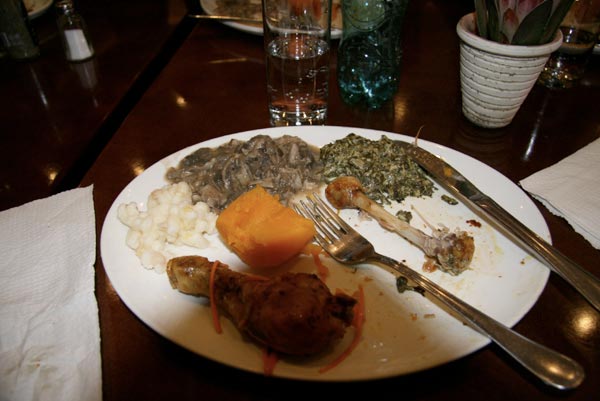 Yum! Let’s have some tripe

Then came a marvelous afternoon at the University of Johannesburg Soweto Campus Hall. This is a very historic building where many rallies and funerals were held during the 70s and 80s. It is really a large gymnasium with a stage; the top of the wall has an opening all the way around and birds fly in and out freely. Three other South African choirs performed several pieces each, and were very good. There is obviously a strong choral tradition here. We had already noticed quite a difference in audience reactions here–nothing like the passive audiences of home. Those of you who toured West Africa will relate! We have learned that they are very reflective during quiet numbers–often just nodding when it is over, with no applause. We were glad to find out that was a good thing–we had been worried that those pieces were not liked. When there is any movement at all on stage (cowboy songs, stamping, clapping) there is an immediate and incredibly loud and enthusiastic response. It can be a little startling, but the choir is starting to enjoy it. Often there will be a high, warbling yell during a piece when someone REALLY likes it. And then there are those who wave their hands in the air during the singing and after to give their blessing to the choir. The audience loves very low bass solos and very high soprano solos. There is no mistaking when they like it! So this was a really fun concert with such an enthusiastic audience. There was a reception afterwards that allowed Singers to mingle with the other choirs. 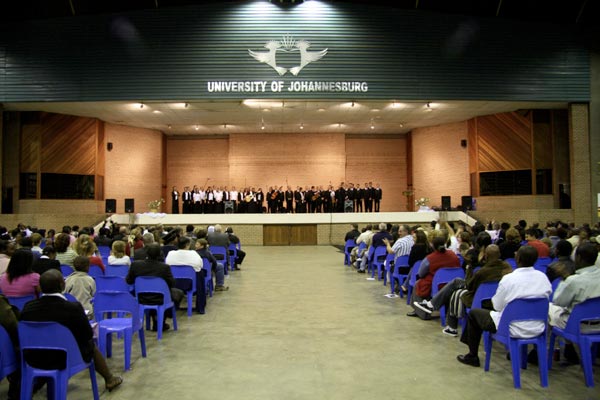 Sunday May 13
HAPPY MOTHER’S DAY!!! This is from all of us to you mothers and wives out there. We celebrated with three different wards today as we attended with our various host families, and all of us were thinking of you and sending you our love over the ocean. (sorry it’s a little soggy…) All meetings were wonderful from what I’ve heard. There will be many stories when the choir returns home–but all are loving staying with the LDS members and having the chance to get to know them, even if only overnight. Tonight we gave our second fireside, this time in the Sandton Ward in Johannesburg. The chapel was packed all the way back to the cultural hall stage, and it was truly a spiritual feast. The choir sang beautifully, the talks and testimonies were strong, and the Spirit very present. The firesides are quickly becoming our favorite part of tour. 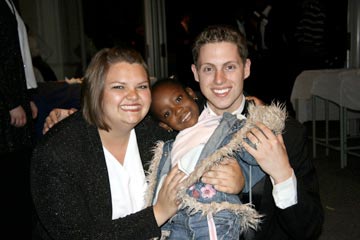 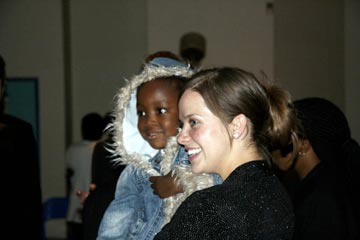