Today was a day with a couple of amazing occurrences. I know you’ll be surprised to hear it, but we put on our coats, opened our umbrellas, and dove into the day. We began early to pick up our Singers, and proceeded to the Cardiff Castle. The castle is 2000 years old, and has witnessed much history through many different renovations and uses. I will have to leave it to you to do your own research on that if you are interested. A Scot who inherited mines while just an infant ended up being one of the wealthiest men alive in the nineteenth century. Part of his inheritance was this castle, and he completely refurbished  the interior. Our guide called it the Victorian idea of a romanticized Middle Age. G. K. Chesterton called it, “Middle Age by moonlight.” 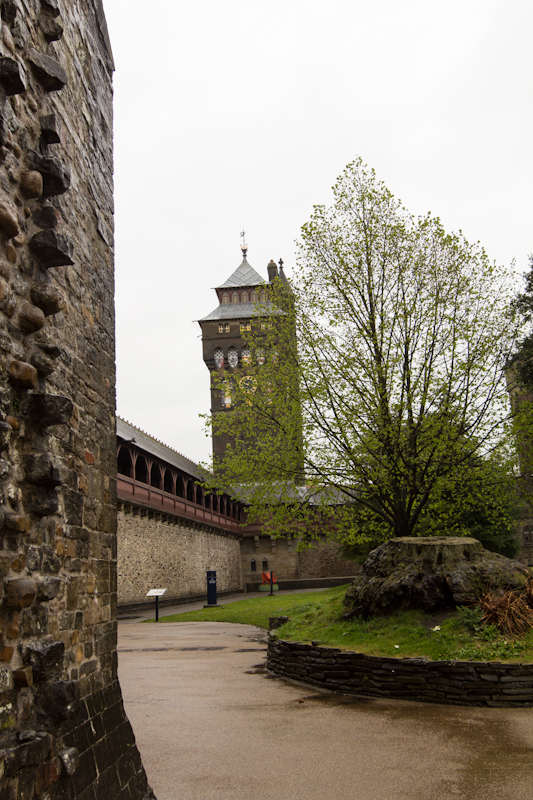 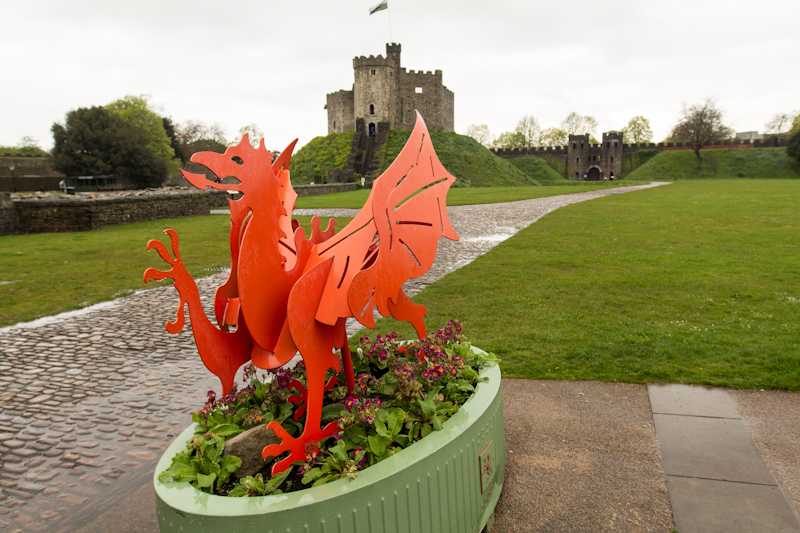 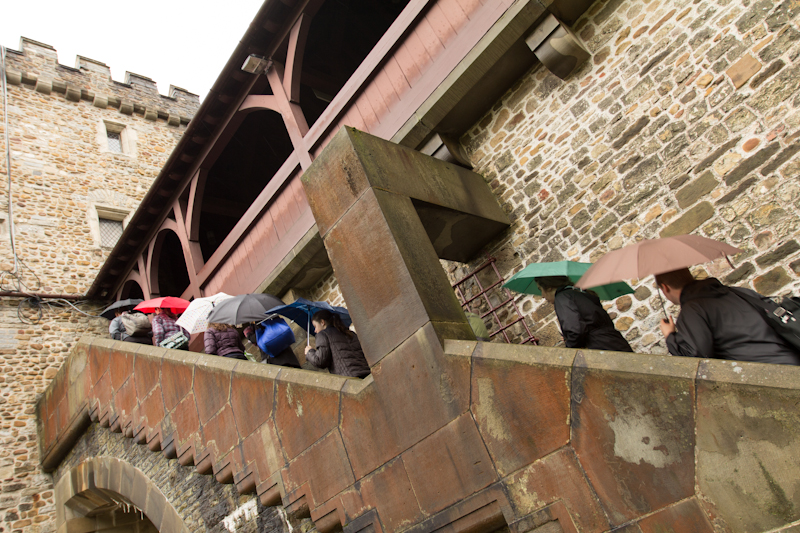 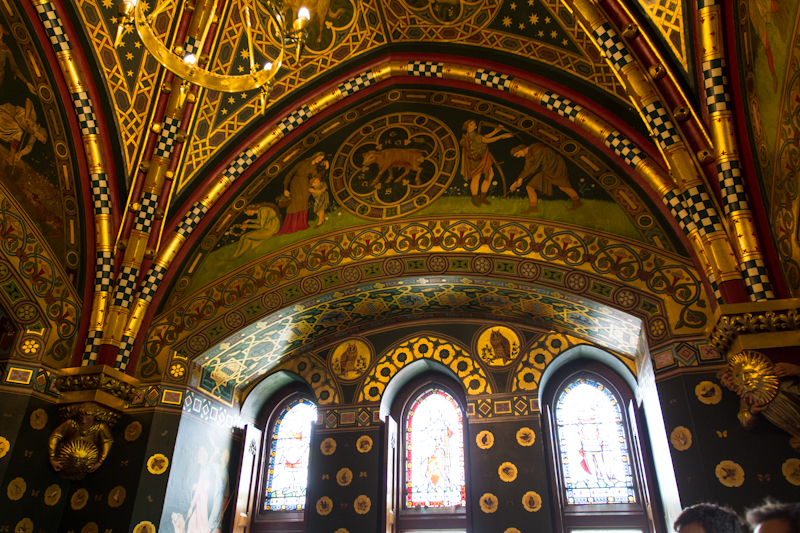 An example of the elaborate decoration on walls and ceilings 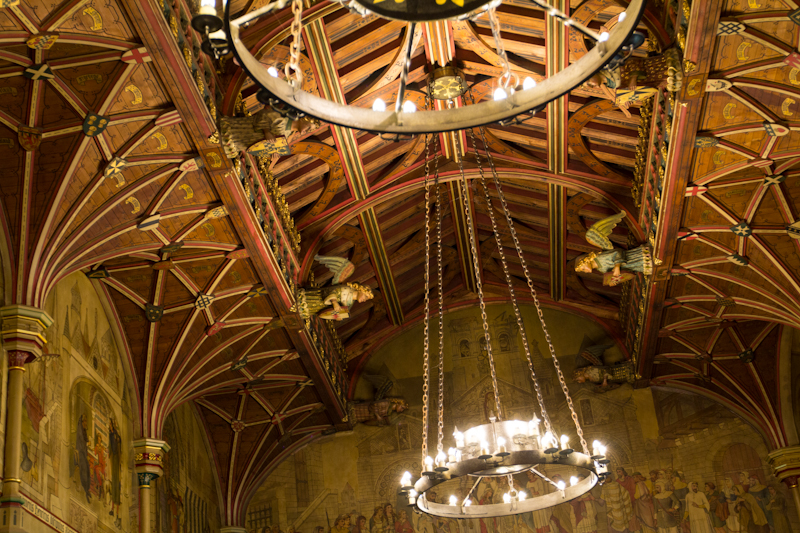 Angels watching over the banquet hall 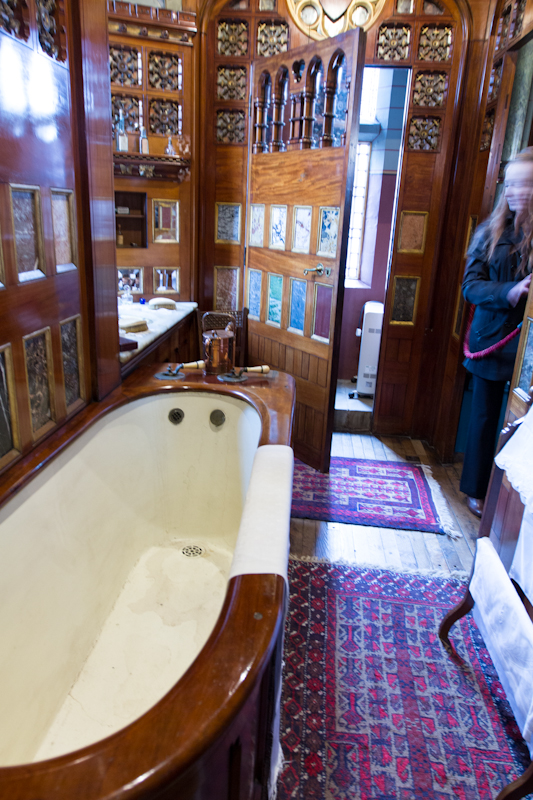 Master bath with dozens of different marbles on the walls 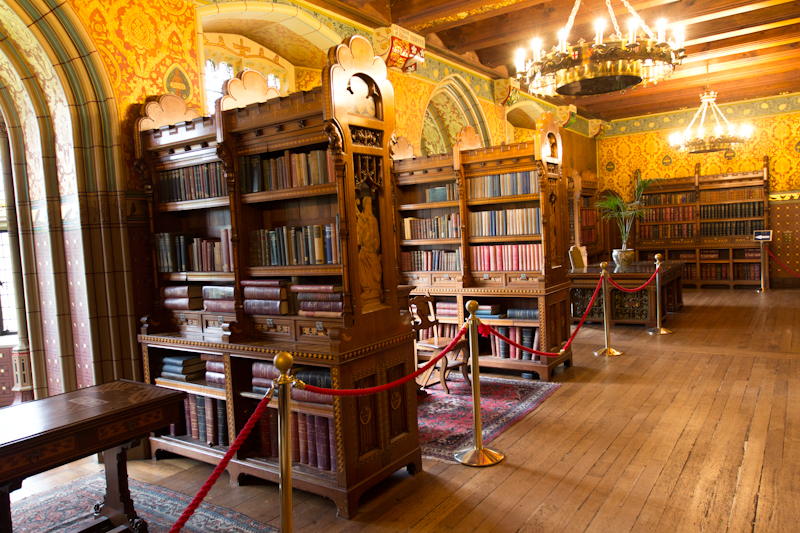 Every house should have a library such as this!

After the castle tour was over we all found somewhere to eat lunch and stay dry for a while. Then we walked back to the Royal Welsh College of Music and Drama, which is just behind the castle. The concert hall is just a year old, and very beautiful. We passed the Anthony Hopkins building on the way, and the Souttzer Hall where we performed is just across the gallery from the Richard Burton Hall. Kind of fun. 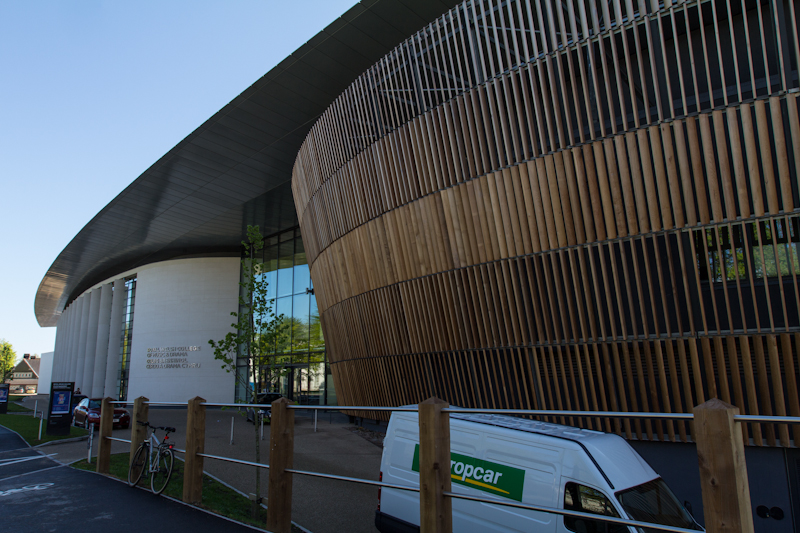 We had an hour and fifteen minutes with five conducting students, each working with Singers for fifteen minutes. I would imagine it was a bit of a dream for them to walk into conducting a choir such as this who really know their music. The hard part is that they really know their music, and their interpretation is pretty well solid by now! All five did well; some good teaching is happening in this college. 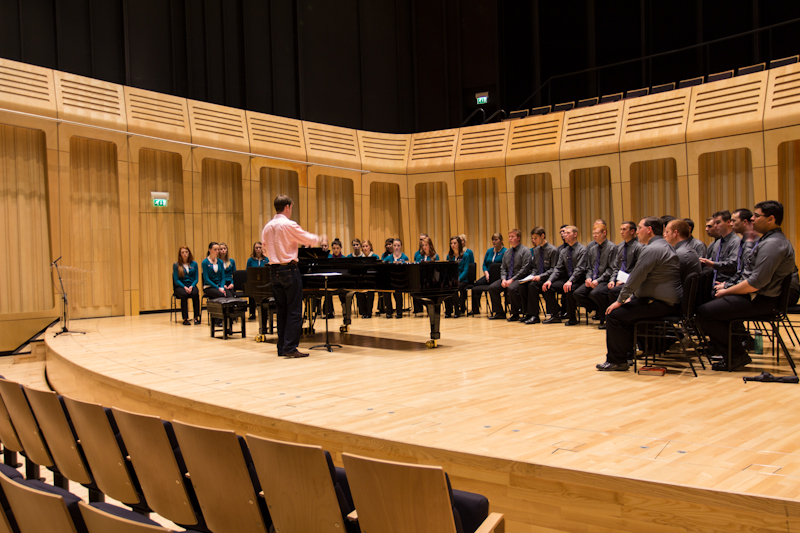 One of five conducting students working with Singers

While the workshop was ongoing, the BBC started setting up many mics to record tonight’s concert – this was the first of the unusual events of the day. This concert was recorded to be broadcast on BBC Radio 3 on “The Choir,” a regular Sunday program. We will do our best to get the word out when we know the date – it will be streamed in the UK, but we’re not sure if it will be available in the USA. Stay tuned for more details. I believe this is a first for Singers, and is a unique opportunity to become better known, as we are told three million people listen to the program. No pressure there! 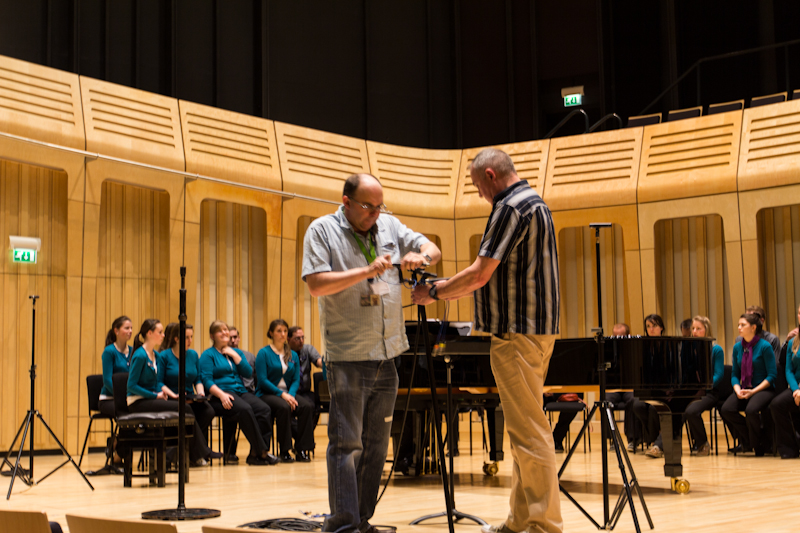 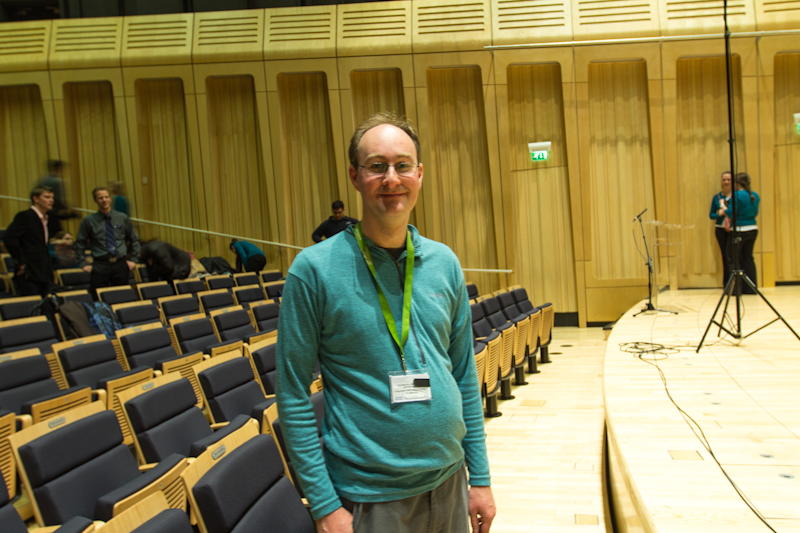 Once the workshop was over, Dr. Staheli rehearsed some places in tonight’s pieces and helped focus the choir’s thinking. A real reason this choir is so excellent is the continual fine-tuning and refining that Dr. Staheli does for every concert through the very last concert of a tour – there is no sitting around luxuriating in what has been accomplished already. We walked out of the rehearsal to find ALL clouds gone, and a bright blue sky luring us outside to walk around for a few minutes. A miracle! and a pleasant and welcome change…even though we know it will not last. 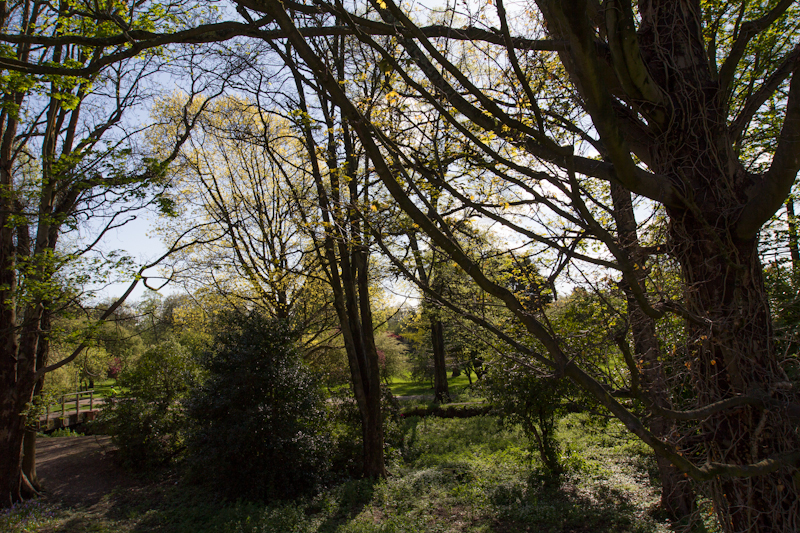 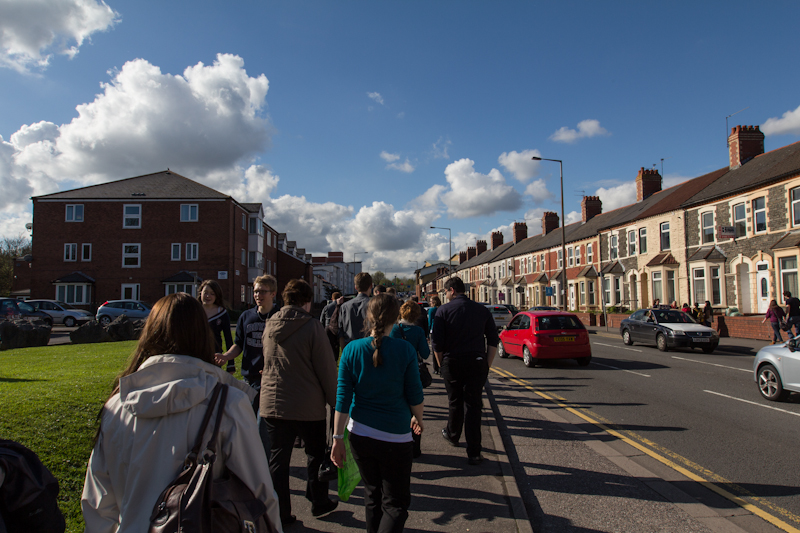 Walking to dinner (look at that sky!!) 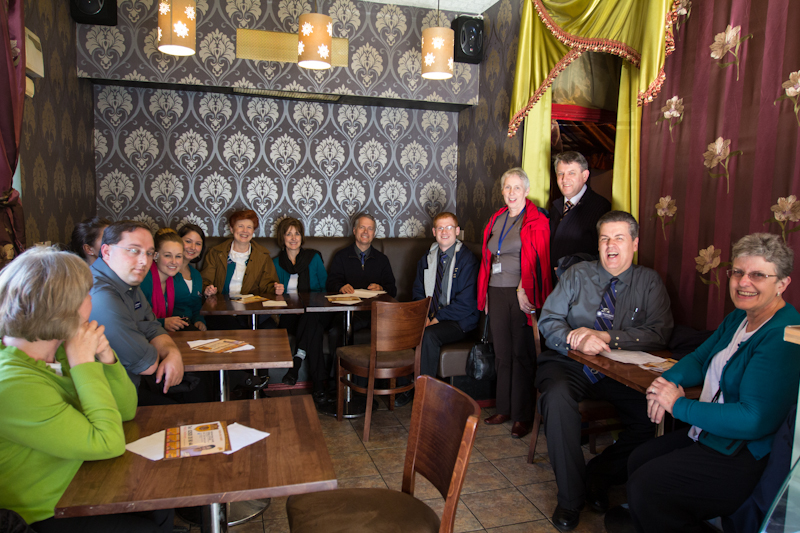 After a dinner near campus, we were back to dress and take care of all last minute preparation. And then came the concert, which was stellar. The concert hall itself is a gem, and very gratifying in which to sing. It was much less forgiving than a cathedral, and allowed no hiding amidst the reverb. But the choir was spot on tonight, and sang a great concert. Intonation, interpretation, inspiration – all the elements were there. The first half was very, very good; then the second half managed to top the first. I hope you’ll all be able to listen and experience this night beyond what I can write. Rosalind Hall conducted “Come, Come Ye Saints” as the last number, and the audience sprang to their feet with tumultuous  applause the minute it ended. 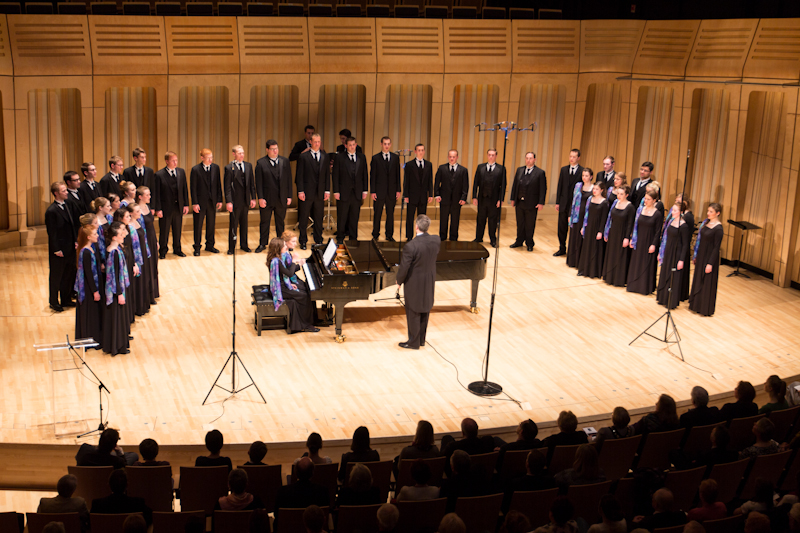 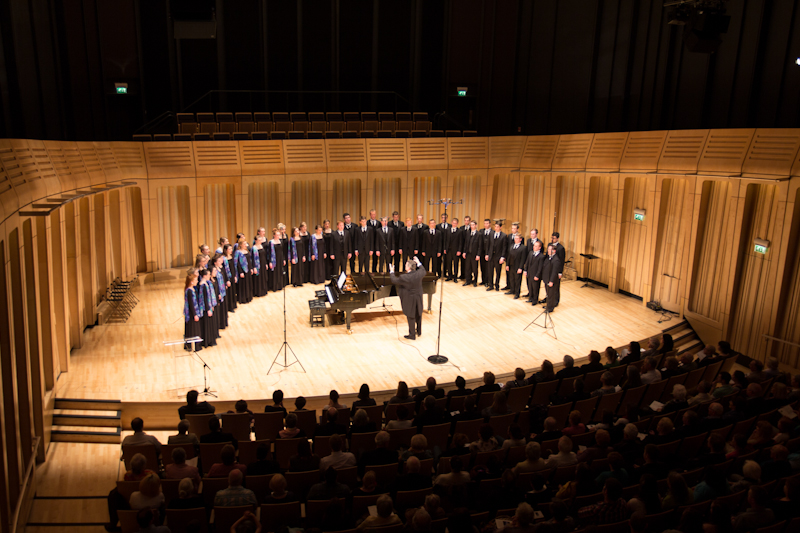 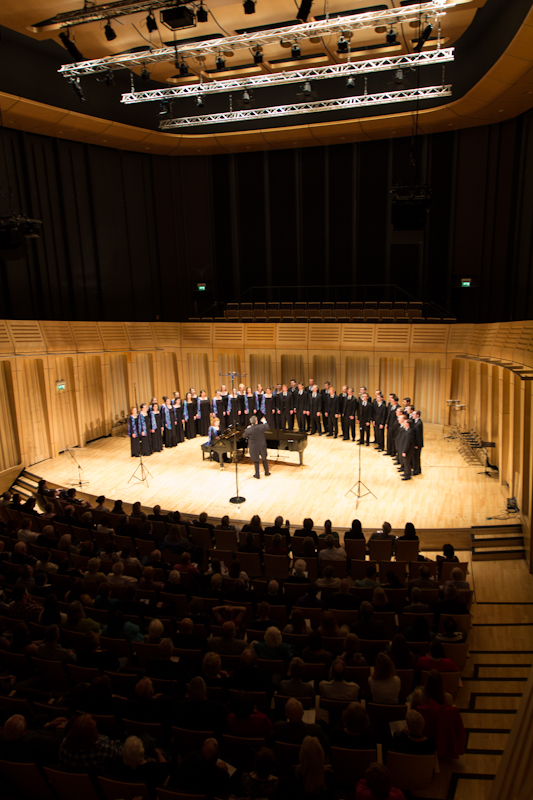 This shows the hall better. Two rows of chairs behind and above choir. 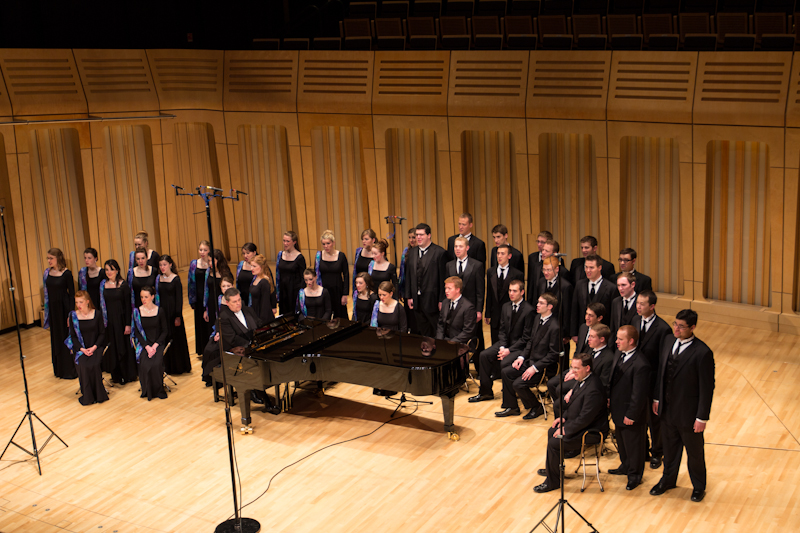 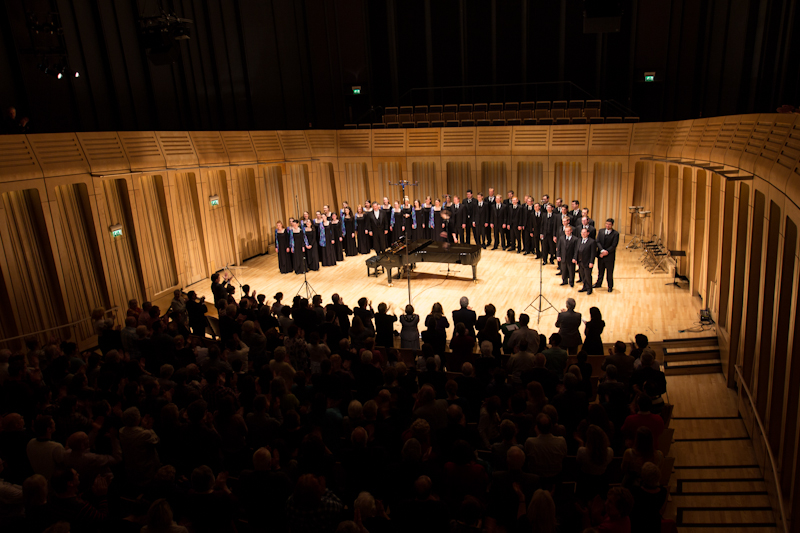 Our coach driver, Craig,  has been marvelous, and Cardiff is his hometown. He brought his wife and two friends to the concert. Other friends of the choir from Utah were present, and many of Sister Hall’s family – her hometown is about 30 minutes up the road. There was lots of mingling and greeting after the concert – it is rare that we know our hosts already and give a concert the second of two nights in a city. It really is a nice change to look out into an audience and recognize people. Everyone was very complimentary, including our new friend from the BBC who engineered the recording and interviewed several of the students. We owe a huge thanks to our sponsors in Cardiff who brought us to this magnificent hall and have taken us in and fed and cared for us for two nights. All in all, it was quite a wonderful day. And there are still more to come!

P.S. Kory and Carolyn Katseanes joined our tour this morning for a few days. He is Director of the School of Music, and we welcome them to our coach, concerts, and adventures!