Sigh. Our last full day in Ireland finally arrived, despite our best efforts to postpone it. What an incredible two weeks we have had. (I’m hearing this in an Irish voice as I write—can you hear it, too??)
I’ve gotten the message from home that though you enjoy the places, you also want faces. So get ready for this blog! 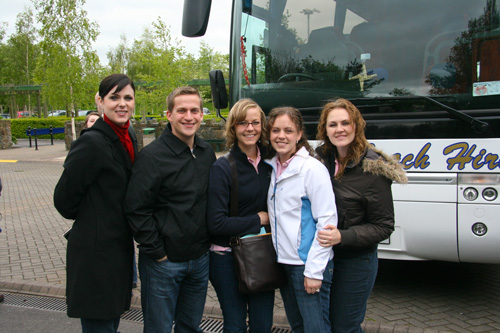 Waiting to get on the road again 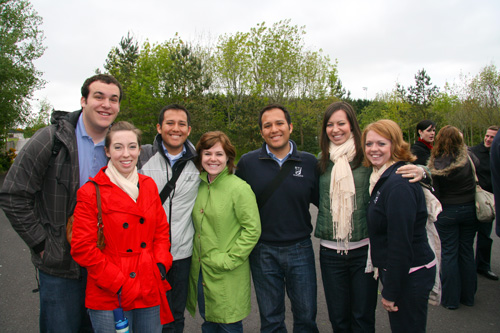 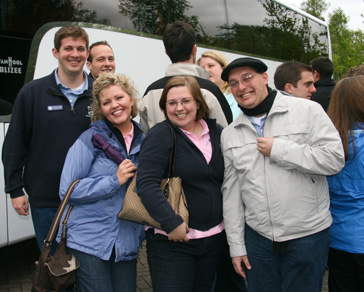 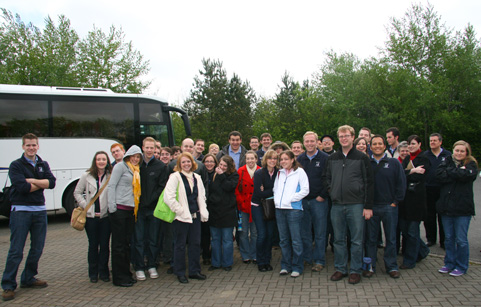 We began the day with a real treat: a trip to Newgrange, a massive 5000-year-old passage grave. That makes it older than the pyramids. It has glistening white quartz walls (reconstructed from piles found during the archeology dig) that surround 200,000 tons of rock, remaining in situ. Many of the rocks have carving on them. 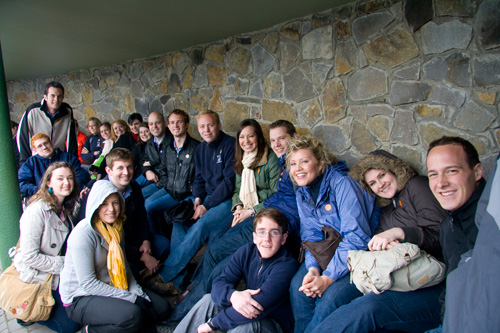 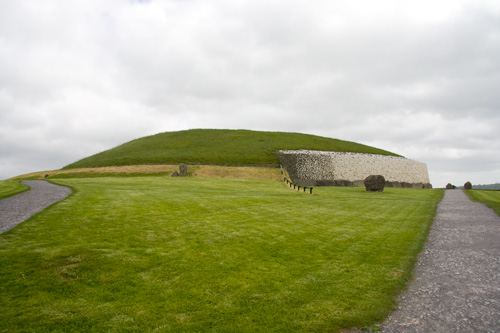 Our first view of Newgrange 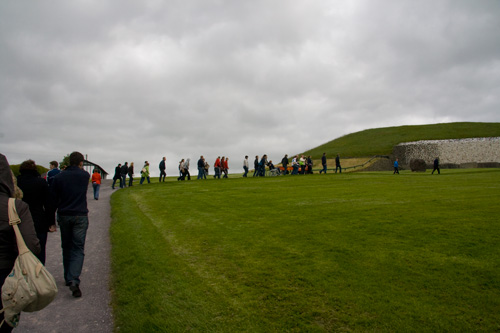 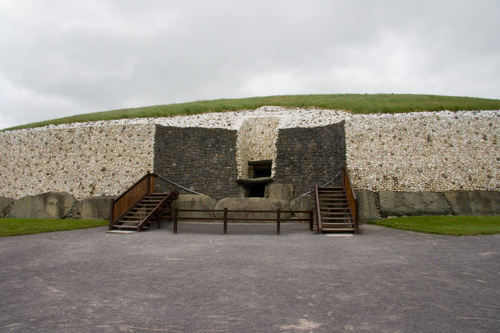 Entrance (our doorway in was the lower hole)

Once we had gone through the exhibit, watched a video, bussed to the tomb, and taken a short walk to the actual site, we walked in about 60 feet, stooped over and sucking in our stomachs to fit into the very short and narrow passage; this took us to the central chamber that is decorated with Neolithic ring markings. (No photos allowed inside.) 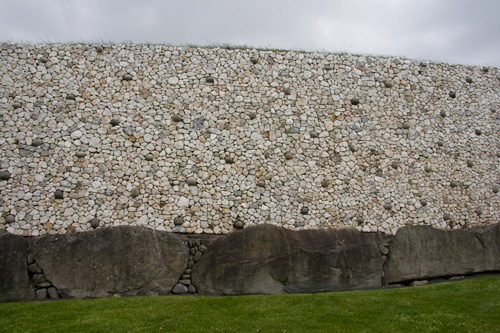 Close view of reconstructed wall, with original stones along bottom

There are many theories about the purpose of the tomb and who might have been cremated there or buried there during the long years of its use, but one thing all the experts concur on is the astronomic significance of the site, which would tie into their religious beliefs as well. On the tour they re-enact the winter’s solstice event, using electric light instead of sun. Beginning in absolute black, light slowly enters the chamber, penetrating the core as it does for 17 minutes on 14 days of the year during the winter solstice. And that is only if the sun is out, which I wouldn’t bet on. There is a lottery to be one of the few people each year who experience this on one of 4 days of the 14. The other 10 days are allotted to politicians and other VIPs. 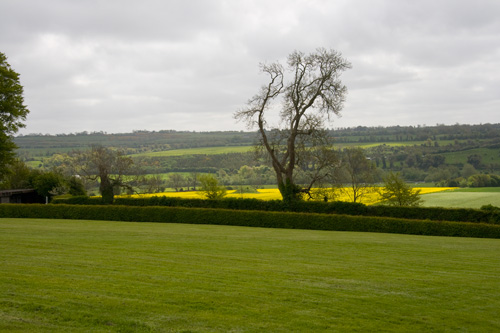 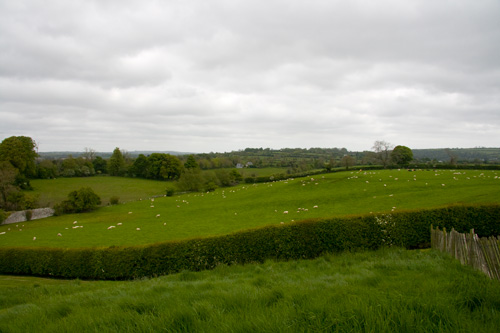 View from another direction

It was a bit of a cold, windy day. No, that is an understatement. Any time both temperature and wind are around 40 degrees and mph it is not much fun to be out in. But we all loved seeing such a unique site, and learning about it. It is right up there with Stonehenge. 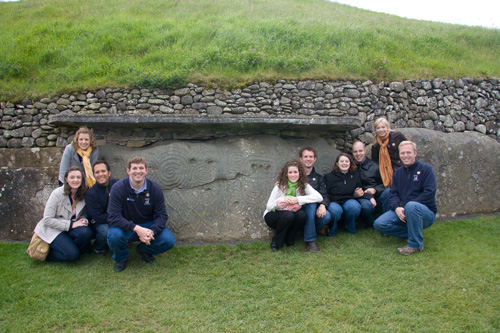 More carvings around the back (no, not the Singers...)

After a tasty lunch at the restaurant at Newgrange (the food was not Neolithic, thank goodness!) P.J. drove us through some cute towns along the ocean, and showed us some very posh homes. Of course, we took advantage of every photo op that came along. 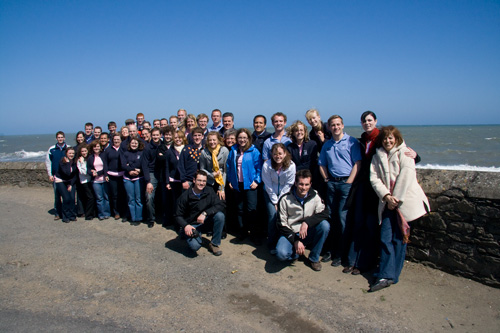 The Dublin Stake fed us a delicious dinner, and we headed to the Draiocht Theatre for tonight’s concert. We were a little concerned that it was a theatre and not a concert hall, but “draiocht” means magic. And make magic is just what Singers did. There were perhaps five empty seats in the theatre, and every person there was entranced by the performance. “Leonardo” took flight for the first time since Cork, which is always a highlight of any concert. The audience itself was a real mixture of the LDS sponsors and host families, community members, and others who heard of the concert and drove long distances to attend. The choir gave two encores, finally ending for the sake of the early start we must make tomorrow. 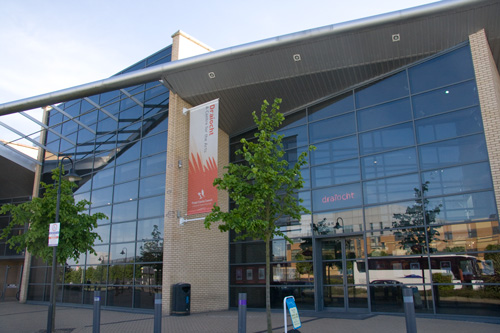 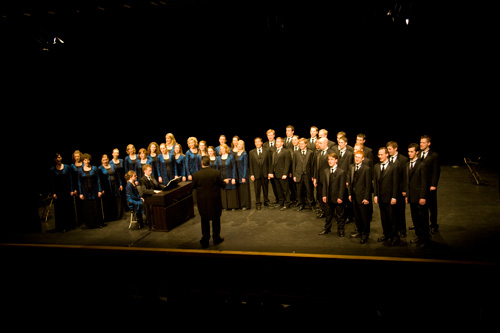 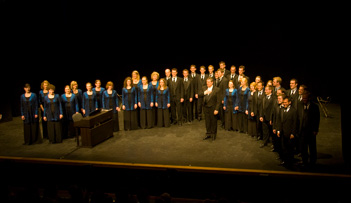 It has been a truly wonderful three days in Dublin, and two weeks in Ireland. I think we will leave a little piece of our hearts here, but the hole will be filled by images and memories.