We packed up the bus, bid adieu to our host families of the last three nights and our sponsors who have taken care of us so beautifully, and headed to the the center of Dublin for a final 90 minutes of museums, walking, shopping for souvenirs and lunch, and whatever else the members of our group found to do. I went to the Irish National Museum far too briefly, and was entranced with the fine collection they have. Most impressive to me were the Caravaggio and Vermeer that were wonderful. It would take a day just to walk through all the rooms.

Then off to the ferry and the sad reality of bidding P.J. goodbye. He has been an integral part of our group since Cork, and I have a feeling he might be missing Singers as much as we are missing him. He of the “doesn’t do tender or loving” ilk has been proving himself exactly the opposite as the days have gone by. He spoke to us of the value of the choir, how they’ve touched the people he’s talked with at the concerts, and how wonderful they have been as ambassadors of the country, their families, their church and their university. He spoke of the genuineness and warmth of the choir and leaders. And he was impressed to see the church in action, and not just pairs of missionaries walking along the streets. I believe we have made a true friend, and we wish very much we could have traveled with him the rest of tour. 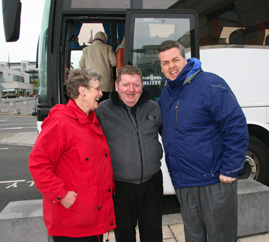 Check-in of luggage and people at the ferry was a breeze. Airports should take lessons. 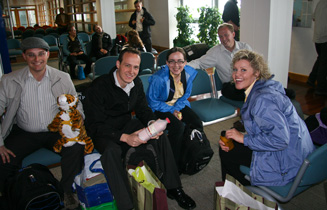 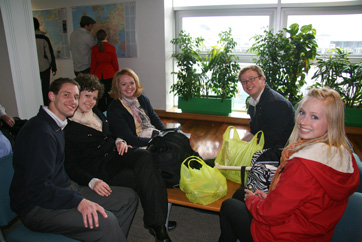 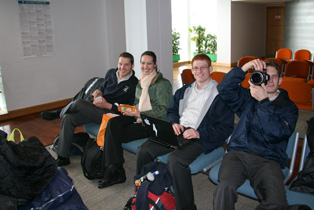 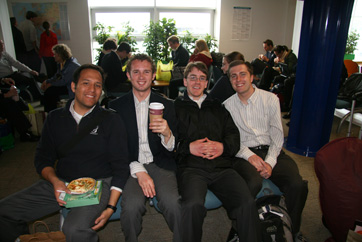 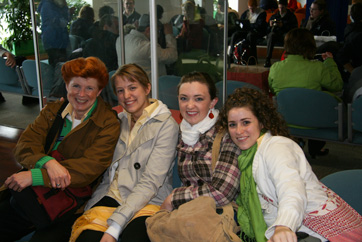 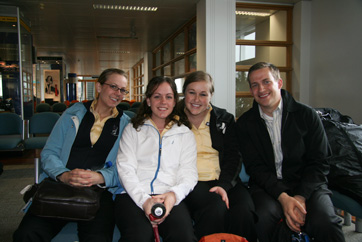 We staked out our desired area for the two-hour ferry ride, and hardly even noticed when the journey began. The ferry itself is huge, so no real wave action was felt. Some slept, some read, all ate, some wandered…no one is bored very long in this group. 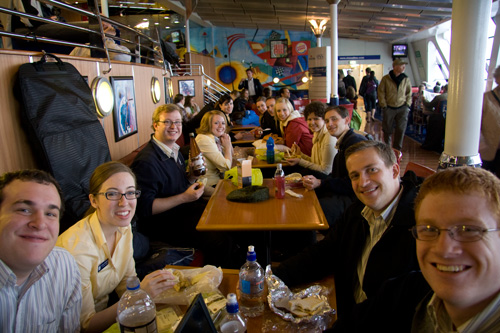 Our arrival in Holyhead, Wales was just as smooth as our departure. Of course, the walk out to the bus is getting more interesting as the choir’s shopping expeditions are adding to their baggage every day. 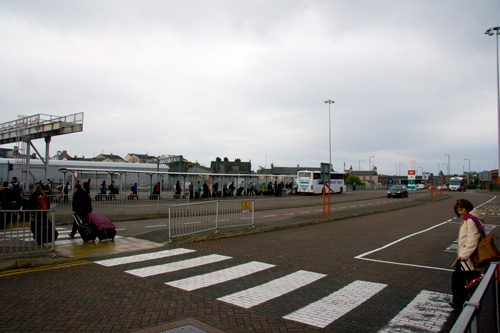 We did manage to fit onto the bus with some clever manuevering; it’s probably good there isn’t a lot of time for shopping or things could get even more interesting.

On first impression Wales seems much like Ireland, but with mountains and little towns tucked into the valleys. So very, very beautiful. These photos don’t really do it justice as most were taken through a drippy coach window. But they do give you an idea. Today was misty with occasional rain, and the clouds sat low on the mountains. 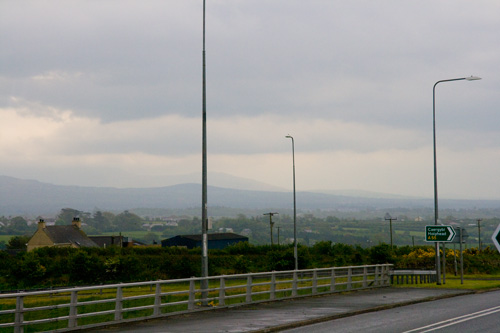 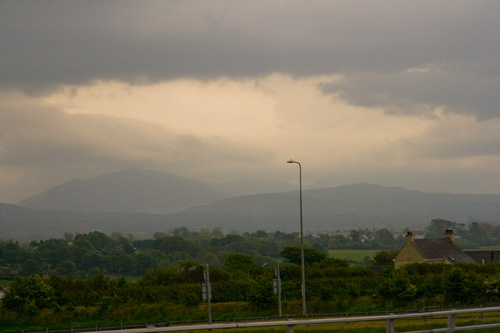 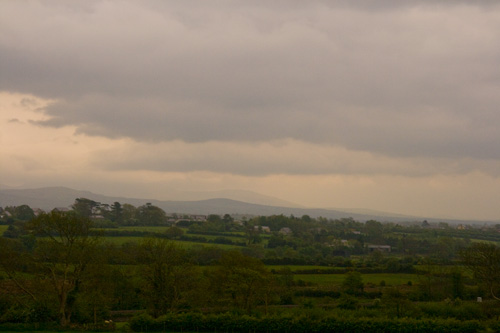 We stopped in the town that is reputed to have the longest name in the world, though now two others claim that honor. Sister Hall is the only one who can actually pronounce it: Llanfairpwllgwyngyllgogerychwyrndrobwllllantysiliogogogoch. It means “St. Mary’s church in the hollow of the hazel near to the rapid whirlpool of Llantysilio of the red cave.” It was so named as a publicity stunt in the 1860s, but worth a group photo. 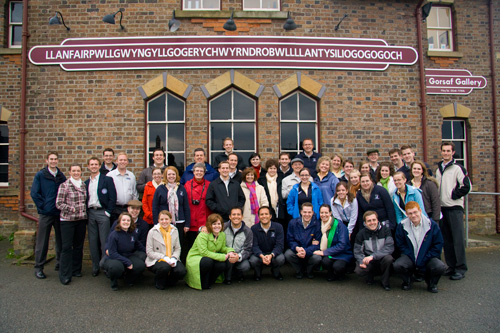 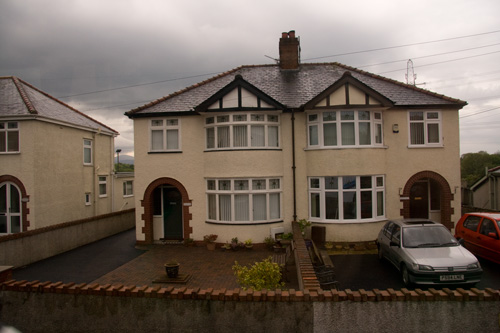 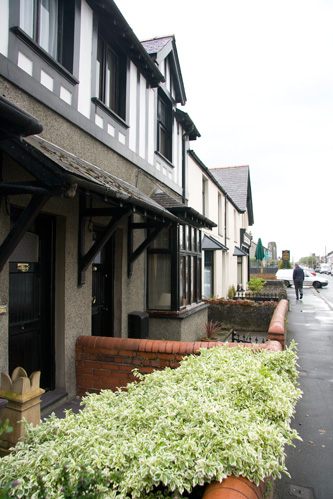 On way to the group photo op 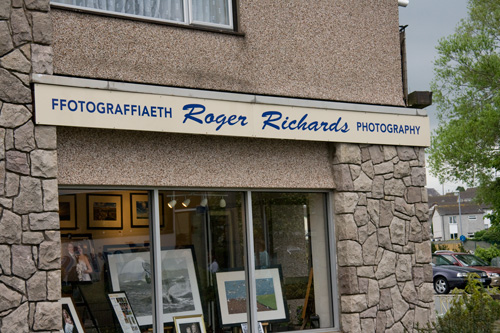 I love all the consonants in Welsh! 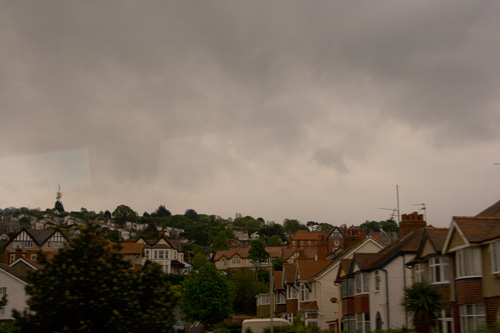 One more photo from the coach window

We arrived at the beautiful Ewloe chapel at 6 on the dot, as promised; and the great hosts had tables set and a delicious dinner ready to go, also as promised. We ate fast, organized and warmed up, and began a fireside at 7:30 for the YM, YW, and YSA of the Chester, England Stake. (That stake has more Welsh wards than English if I understand correctly.) The chapel was just about full, and all seemed to enjoy the evening. I was able to stand in the back and be part of the congregation this time rather than singing, and I love being able to watch the choir from closer than I can in concerts. 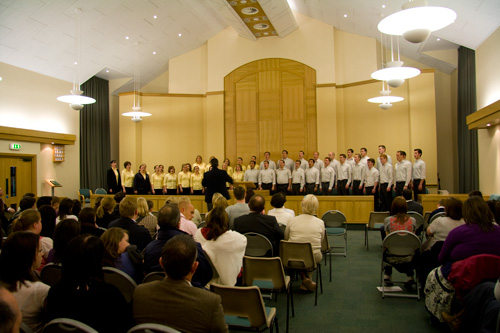 We have our fingers crossed for better weather tomorrow as there is quite a bit we hope to see. And we look forward to tomorrow’s concert. To be continued…