Any day that begins with a few hours in the temple is a great day, and that is how we began ours. What a beautiful temple; every part of it is painstakingly crafted. The golden stained glass windows particularly caught my eye. Situated on a temple square with an MTC, stake center, distribution center, apartments for temple missionaries, and lodging for visiting temple patrons, it is a very peaceful area. And it is wonderfully landscaped, as all temple grounds seem to be. 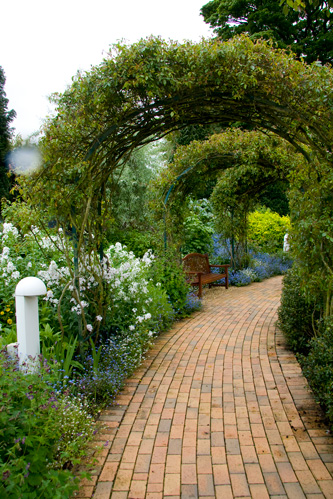 Our day continued with Brother and Sister Taylor taking us to see more Church history sites. It is very interesting to realize how such a small area of England provided so many converts so quickly, and how many then immigrated to the US and joined the trek West to Salt Lake City.

Preston is a large city, but we found areas of beauty. The River Ribble saw the first baptisms in England. 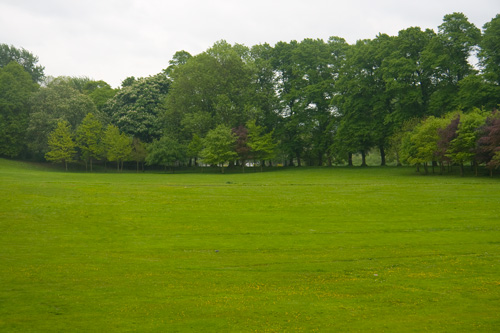 River Ribble through trees if you look very closely

Preston today has the oldest continually meeting branch in the Church. The Cockpit is very near the river, and was used to hold meetings. It started as a place where cock fights were held, then was sold to the teetotalers to use. Early LDS missionaries held meetings there; it was a full circle (only a half is present now) surrounded by stadium seating. The nearby Methodist church would ring its loud bells to drown out the Mormon preaching. 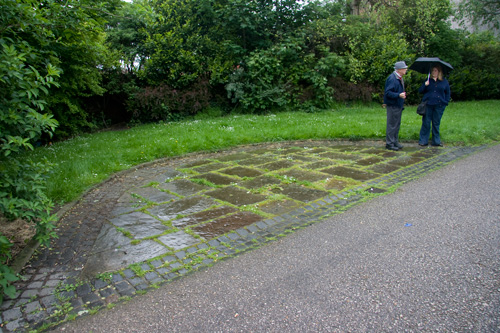 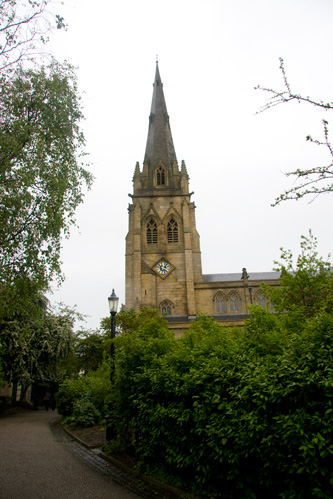 Nearby Methodist church with bell tower

Here are some painted doors on homes such as we have seen all through our British Isles travel; I’ve just been looking for the right ones to show you. We’ve seen all colors of doors, and many homes in the row houses are painted different colors or bricked differently though they are all part of the same building. 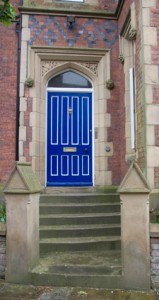 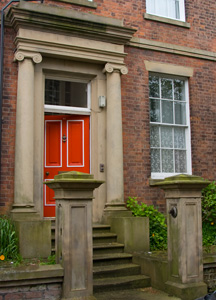 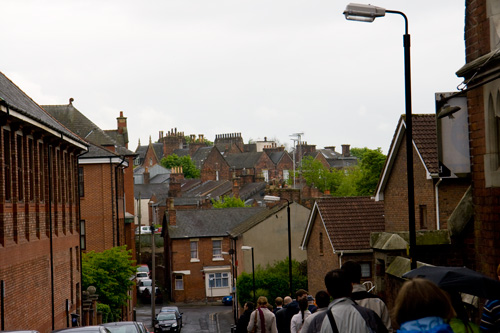 Notice all the chimneys--one for each fireplace in every room

After a little free time in Preston to wander, we drove to Downham, one of the three villages that had a very high conversion rate. This town seems virtually untouched by time, with much looking much as it did in 1839. (I’m showing great restraint in the number of photos from this town.) 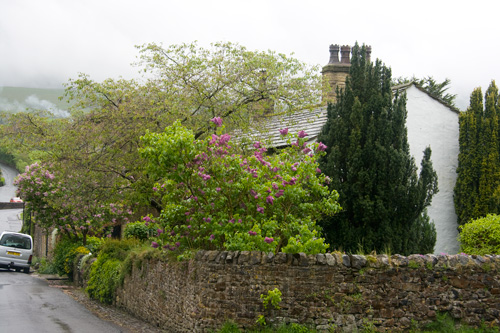 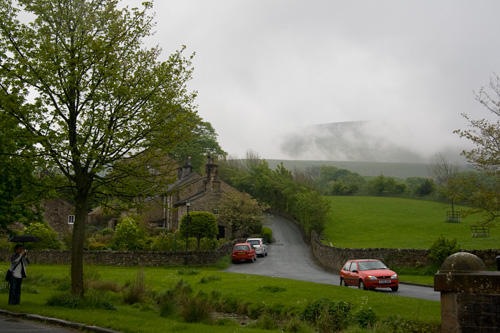 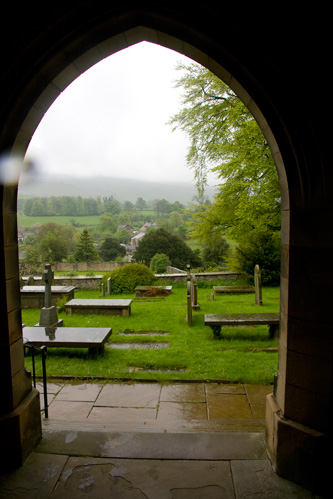 From church, with raindrop

As Brother Taylor was telling us all about the history and painting a vivid picture of Heber C. Kimball’s experience there, who should appear but an entire district from the Preston MTC; they were having a field trip. That was quite the mix of old and new, and was witness to how far the LDS Church has come. 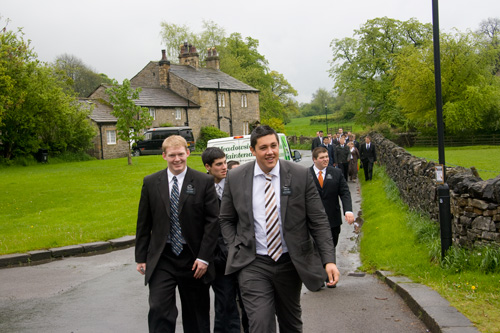 The district's appearance on the scene 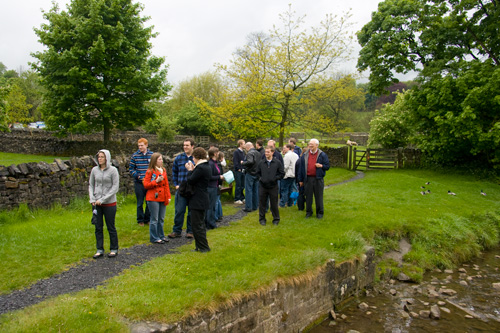 Realization of the missionaries' arrival

We were fed a delicious lasagna dinner back at the lodging dining room, and then it was on to figuring out how to fit this penultimate performance of tour into the chapel. The chapel itself is quite large and nice, and has good acoustics. After some adjustments, Dr. Staheli and the choir figured out what would work where and how. There had to be a little repertoire adjustment due to the location, but there are plenty of pieces from which to choose.

The audience started showing up early, and just kept on coming. There were over 500 by the end of the first number, and the elders were setting up more chairs in the cultural hall as fast as they could. 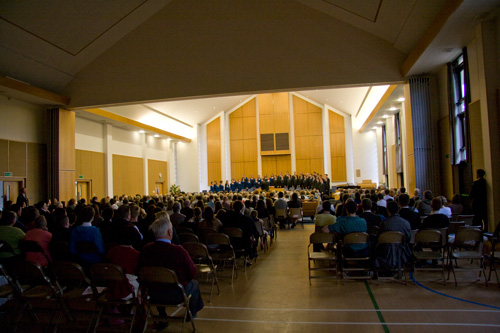 And more came yet

The leader in charge asked for applause to be held until the end of the concert, but Michelle Broadbent’s solo and “Leonardo” took care of that stricture. 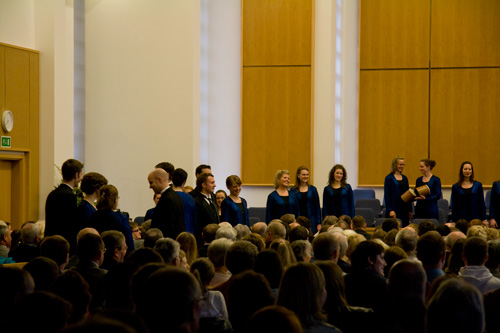 "Turn the World Around" out in the audience 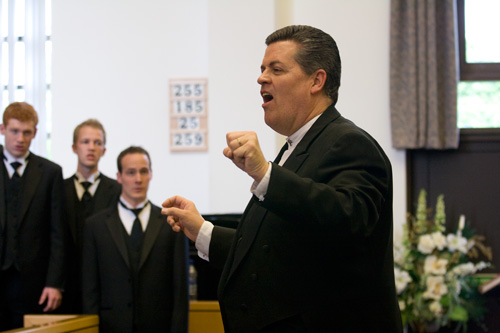 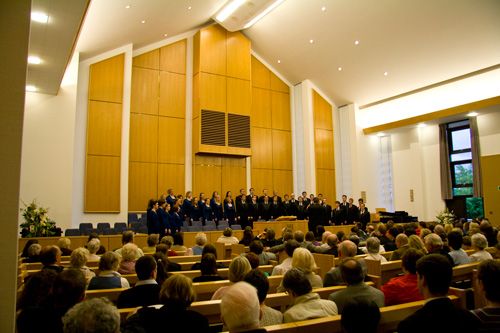 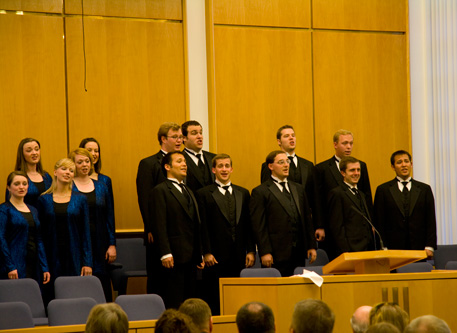 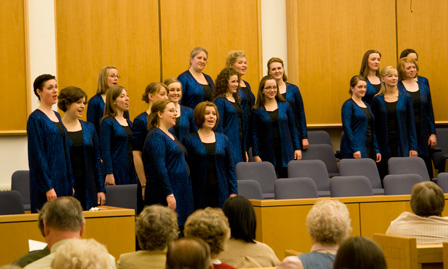 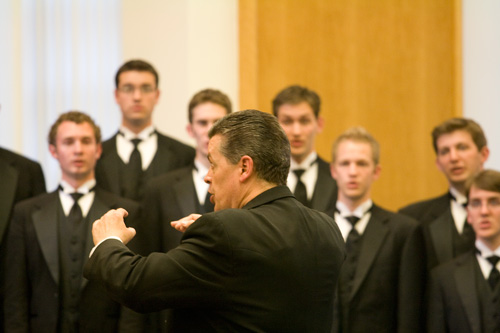 Then they returned to appreciating silently, as had been requested. At the end, there were short comments by a member of the stake about the value of music and the joy he had gotten from this concert. Singers sang “I Know that My Redeemer Lives” as an encore and to quiet things down a bit before the closing prayer. Singers had given a wonderful concert, and when the prayer was over the audience bounded to their feet; I think it was all the repressed applause that just had to come out somehow. And it was approved at that point. 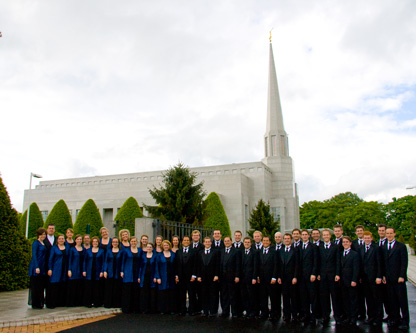 We are now back in the residence, packing or cleaning our rooms or washing clothes or visiting. With the end of tour approaching rapidly, even all the hours together don’t seem to be enough. 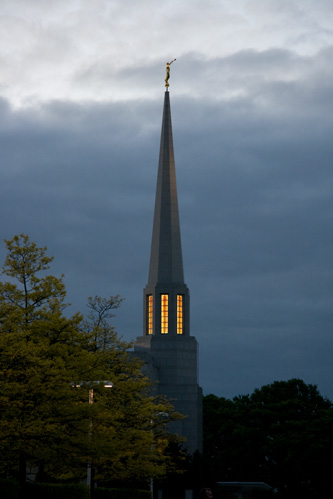