We awoke to the clearest, bluest skies we’ve seen since Utah. The weather pattern that brought cooler weather and breezes also blessedly cleared out the pollution—though I think we left much of that behind in Beijing. It really is a treat to be able to take some deep breaths.

We were given an extra ½ hour to sleep or organize or linger over breakfast; our second treat of the day. We headed out to the Ancient Culture Street which is a great shopping area. This was an area of contrast: new and under-construction high rises as background to wonderful painted and tiled old-style buildings; small touristy shops right next to very high end jewelry and jade and furniture stores. Lots to look at and admire. Our plan to find lunch there was extinguished by a lack of safe-looking food, so ice cream became a food group for many Singers. 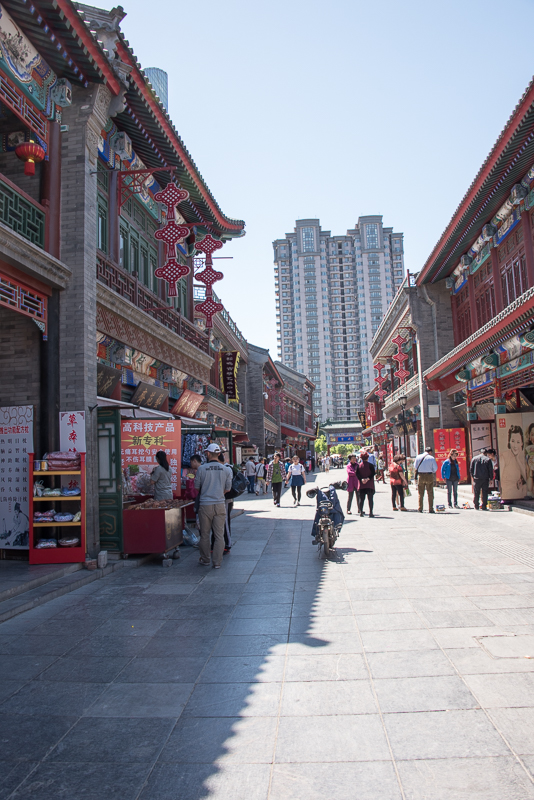 Contrast of old and new. 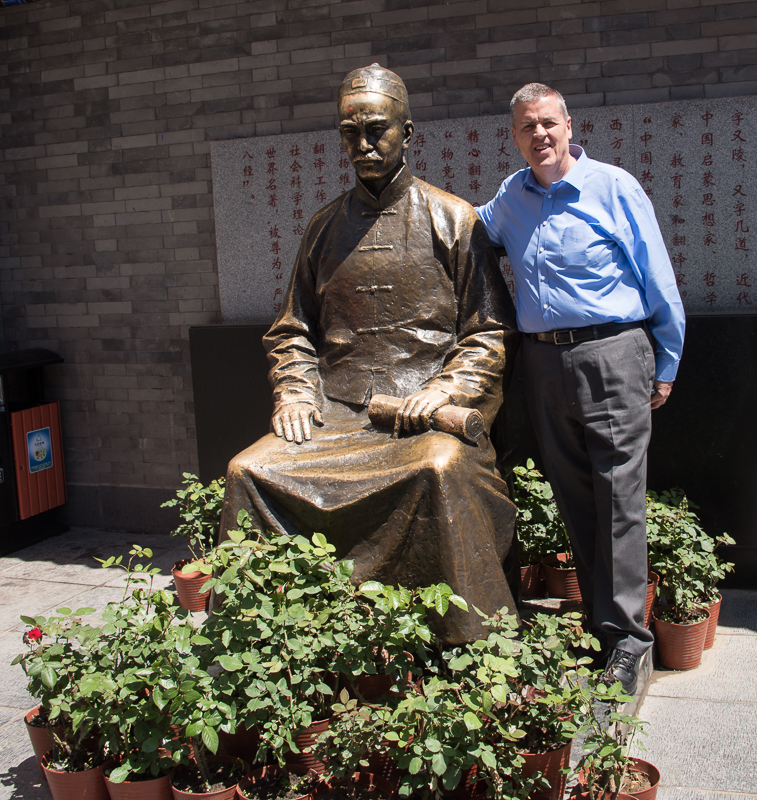 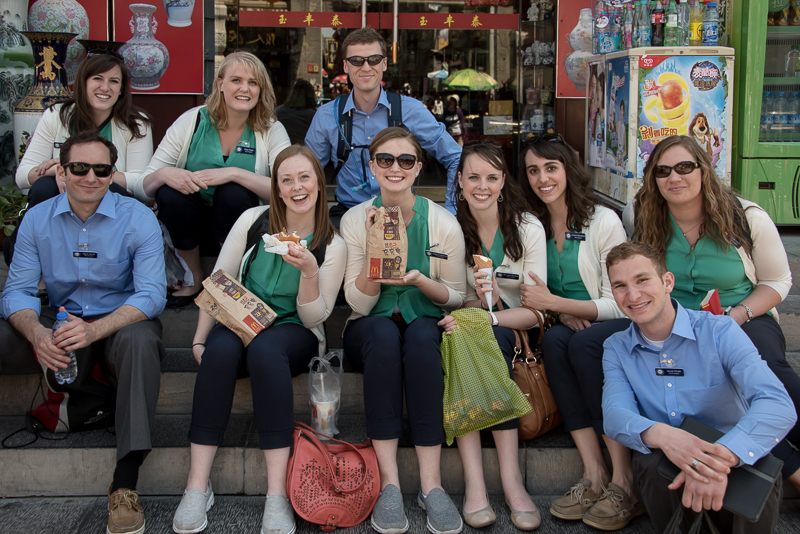 Next came a tour at the Cantonese Opera House and a performance by members of the Peking Opera. Their costumes were beautiful, and it was very interesting to hear music that is so very different from our own Western tradition. It was a real reminder that our music must sound just as strange to them on occasion. The differences in vocal tone and acting were striking; and the orchestration was fascinating. The orchestra came on stage to play a couple of pieces on their own, and it was intriguing to watch them play new (to us) instruments and see how the man acting as conductor directed them with his mallets that he used on his percussive instrument. The choir rehearsed “Muo li Hua” with a fine Chinese flutist who will be accompanying them in concert tonight. 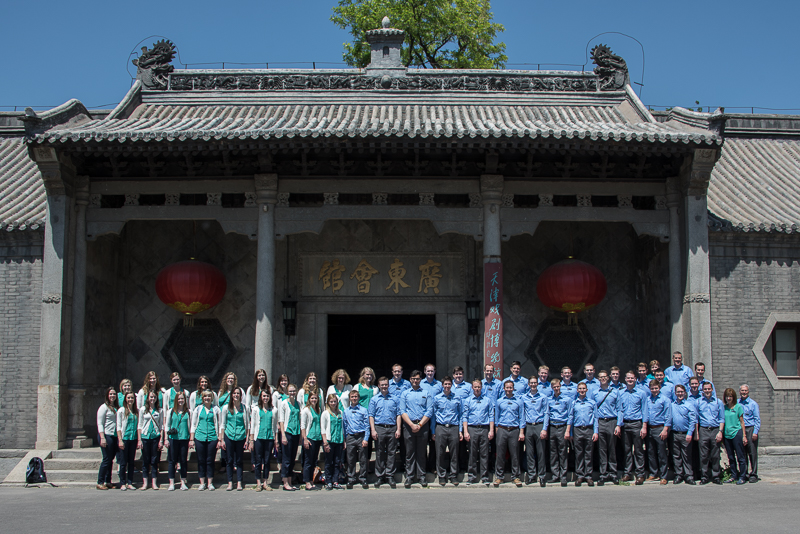 In front of the Cantonese Opera House. 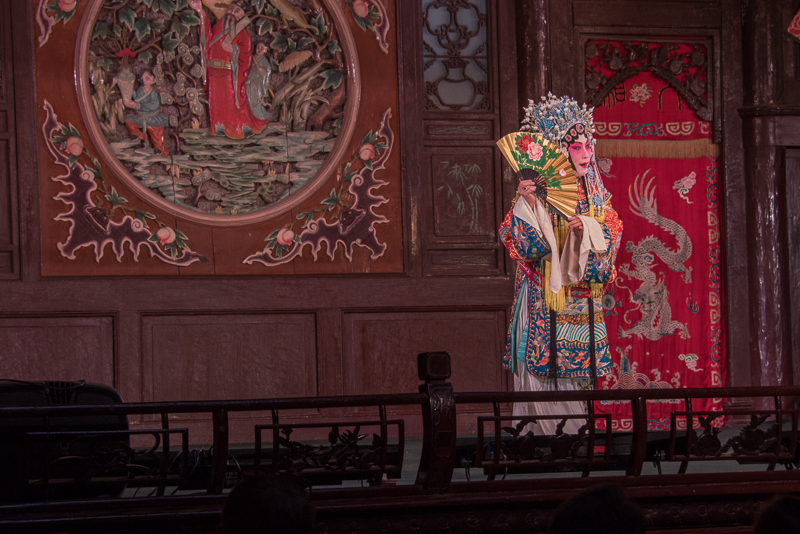 One of five of the Peking Opera who sang to us. 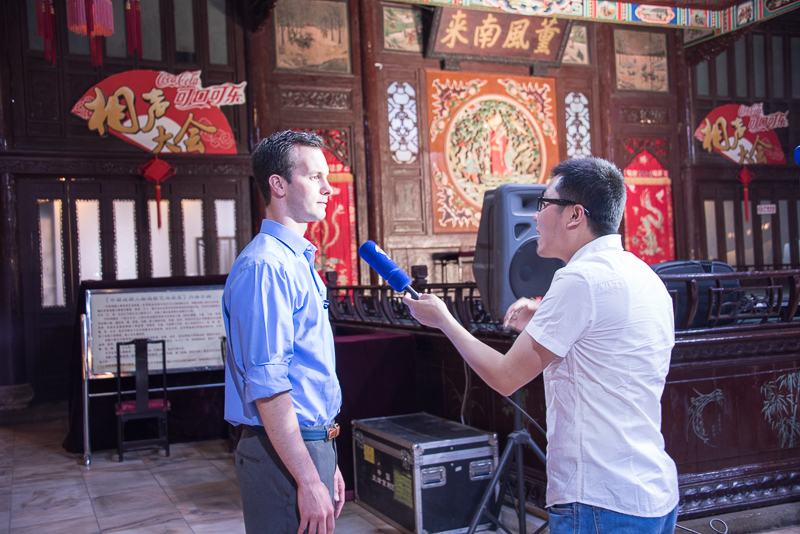 There were journalists there and a videographer, though we do not know where the interviews will end up. We then had the obligatory group photo; mine usually have all the other photographers and videographers in the frame as they tend to stand very close and in the middle of things. They must have magic lenses to get any kind of photos from those positions!

By then we were quite late, so we ran up the stairs to our rooms (there is only one small elevator) to get in concert attire and bus to the venue for rehearsal and dinner. 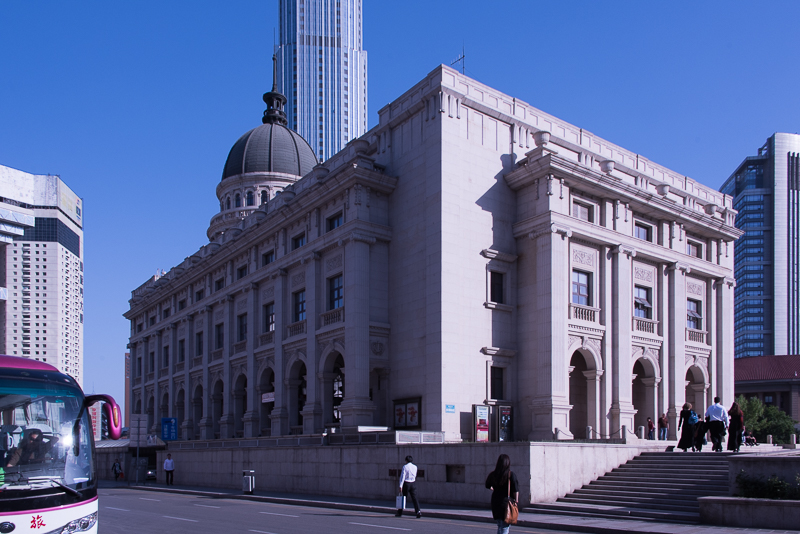 The concert hall was beautiful, with a gorgeous sound. We had a near-capacity audience who seemed to really enjoy the evening. BYU Singers began with Mawby’s “Ave verum”, Bruckner’s “Os justi”, “Pilgrim’s Song”, “Seinn O” and “Wade in the Water”. The Pei Yang Chorus sang their portion of the concert with a Mendelssohn, a Rheinberger, and Whitacre’s “Seal Lullaby”. Singers then sang their Monteverdi to set up Whitacre’s “Leonardo”—and that just gets more fire in every performance. If the Internet is ever strong enough I’ll try to get some video up, but don’t count on it. 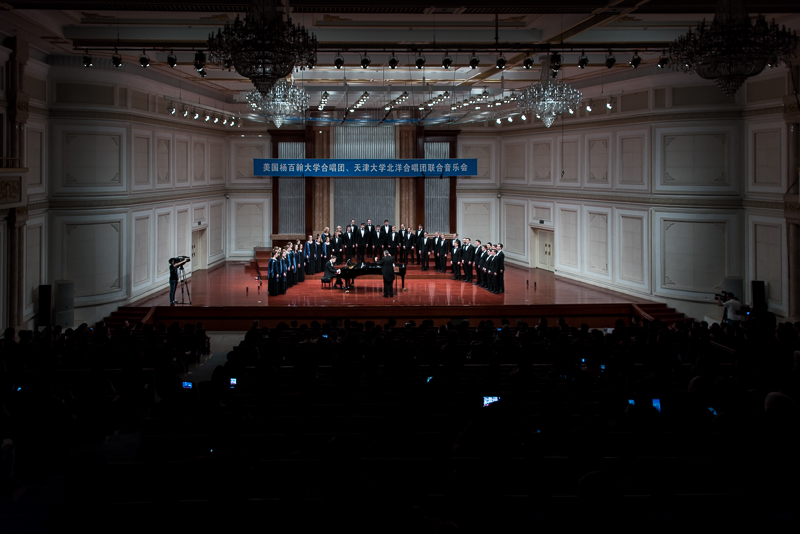 Note all the little bright screens…

Speaking of video, I stood in the back of the house to take photos. At all times there were at least 25-30 cell phones/tablets recording pieces in the concert. During the last two numbers, there were over 50…I lost count at that point. I’d say that would indicate that the pieces were enjoyed…and will be again and again. 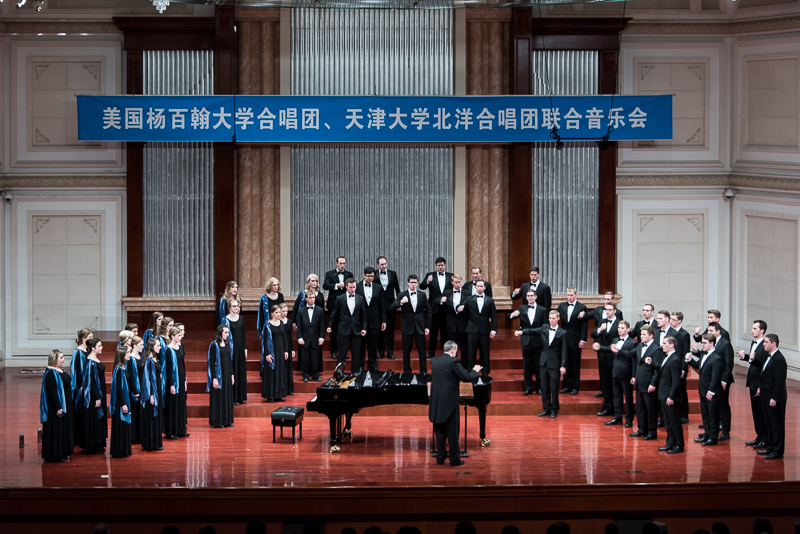 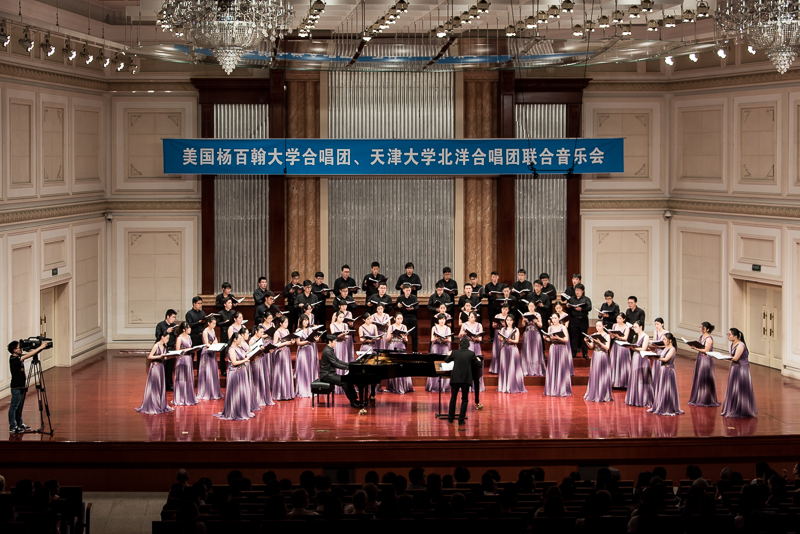 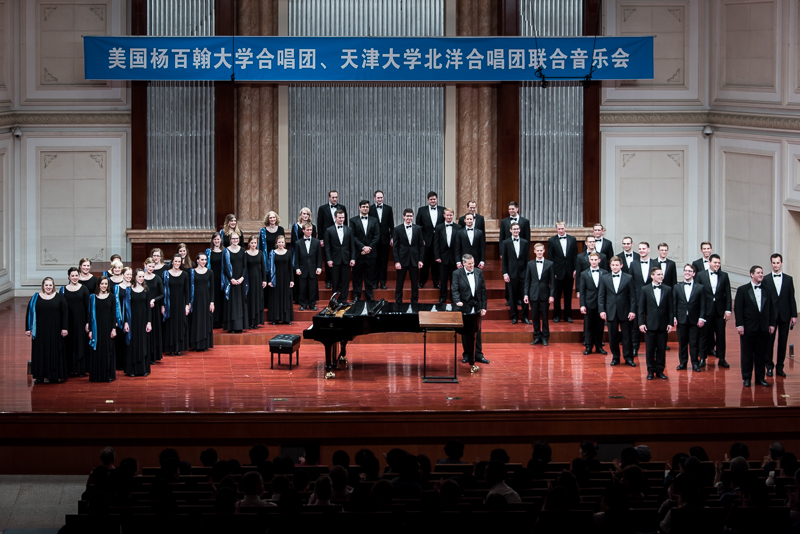 The final two numbers with the combined choirs were the hit of the evening. The Chinese flutist added a wonderful color to “Muo li Hua” with his Chinese flute; and our new Chinese friends got a taste of the Old West with “The Colorado Trail”. 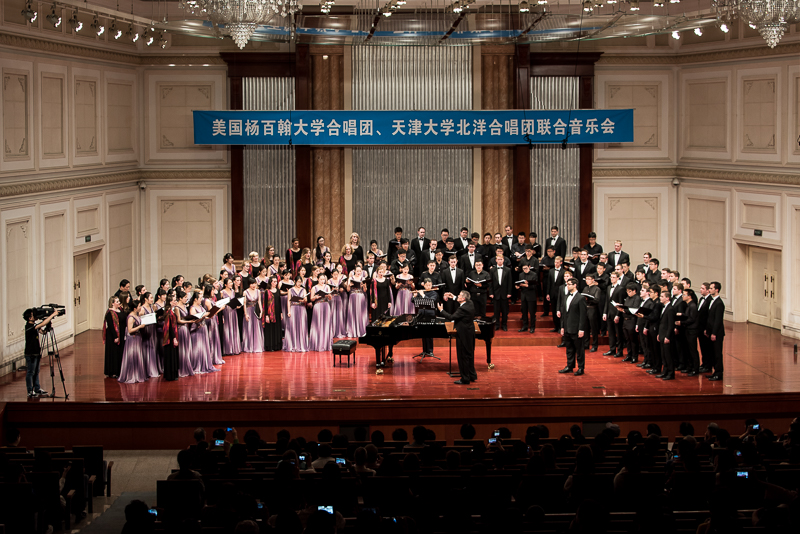 This was a wonderful evening, and a true testament to the unifying power of music. It’s a cliché to say that music  transcends borders, but most clichés began with an element of truth! We have enjoyed our time here, and know now why we were told that Tianjin had possibly the best choral music in China. It was a joy to hear them and to sing with them.