Our bus is a double-decker, with a small section of seats on the main floor and the majority of seats up top where the view is much better. Our coach driver is shut away in the cockpit of the bus, separated by a door. This door is about 4 feet high by maybe 18 inches across. The only microphone on the bus is in there, so anyone with an announcement has to crawl through the “rabbit hole.” We have been astounded with the agility and flexibility of Singers of all sizes. 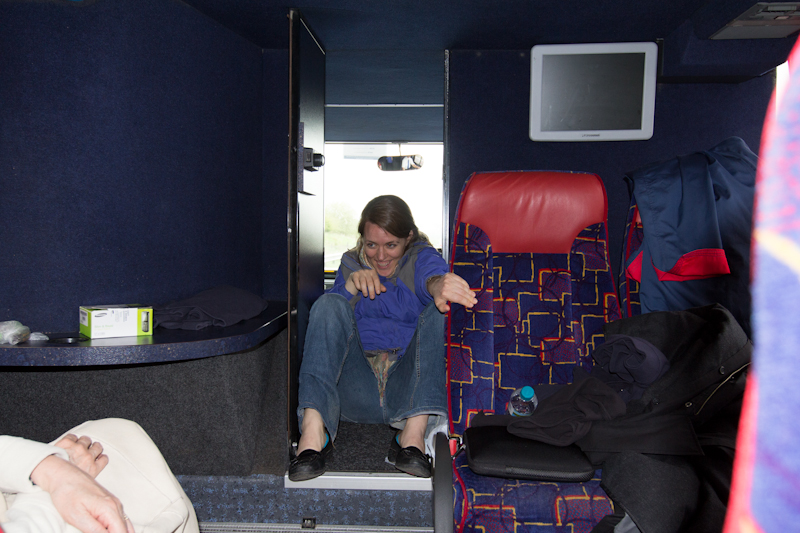 One method to exit via the "rabbit hole."

Back to Oxford today, with our fingers crossed and our hopes up that the weather would cooperate there as it most surely did not in Cambridge. Luck was with us for once as the rain mostly stopped once we arrived at the Ashmolean Museum of Art and Archeology. And from that moment on, we were off and running in all sorts of groups, large and small. Some looked over the museum, others went on a guided tour of Christ Church College, others toured Merton College – both are colleges in Oxford University. And I heard a rumor that a few people stayed warm and dry at a showing of “The Avengers.” Completely understandable after being damp and chilly most days.

I toured Merton College, so that is what you’ll have documented a bit today. We had an excellent tour leader in Chauncy Harris, who is a Ph.D. student at Merton and works in the library. First you should know that Merton has a claim of being the oldest college in Oxford (though two others also claim that title) and was founded in 1264. We were given an amazing amount of information and history today that was fascinating. With the risk of embarrassing myself if I try to tell you more than I really know, I’ll only give you the briefest of overviews with lots of photos. They’re more fun, anyway. 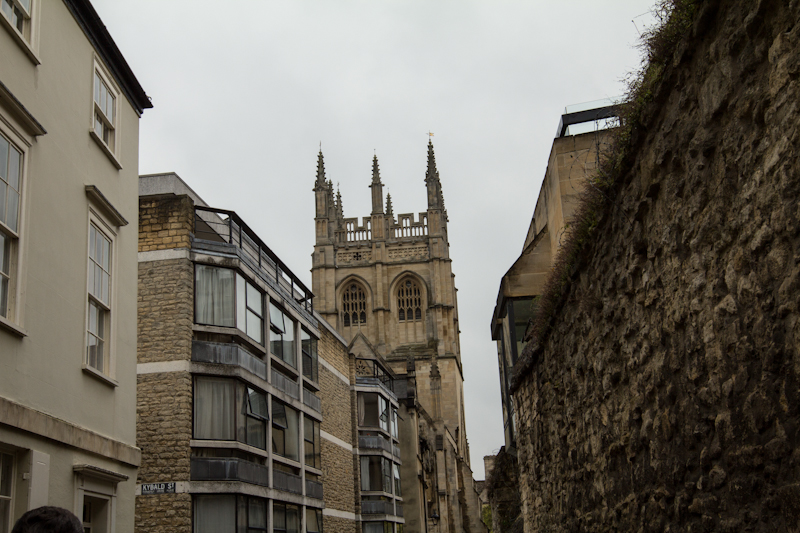 The constant contrast of old vs. new evident throughout Oxford 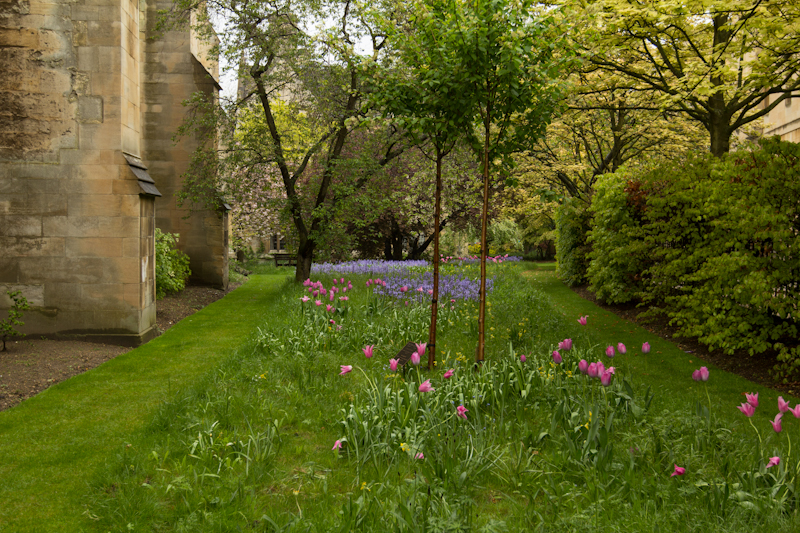 A garden at the college 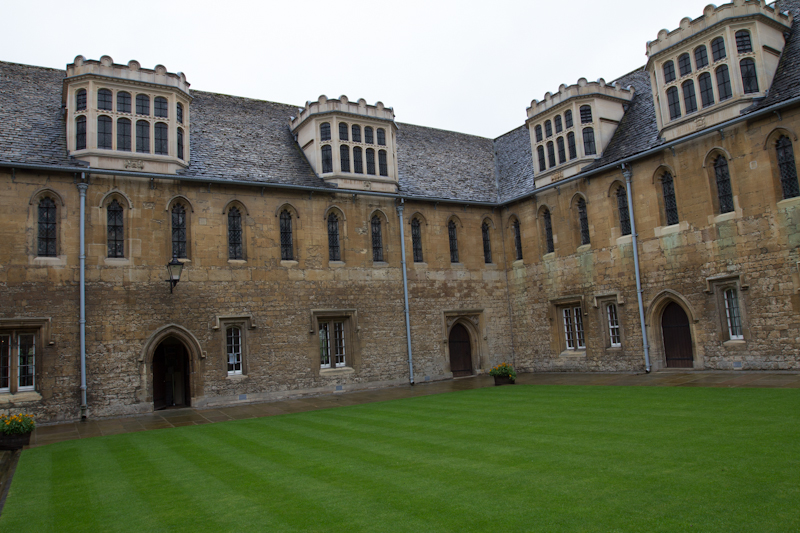 We went first to the Merton College Library, where no photos were allowed. Darn. It dates from 1373, and is the oldest continuously functioning library for university academics and students in the world. It was incredible to be among volumes so very old. They have a remarkable archive of medieval manuscripts and early music, but none was on display today. The tiled floor was 800 years old, the “new” oak ceiling 500 years old (or so) and everything we were shown was awe-inspiring. The ancient nature of so much of England is so different from our own country. 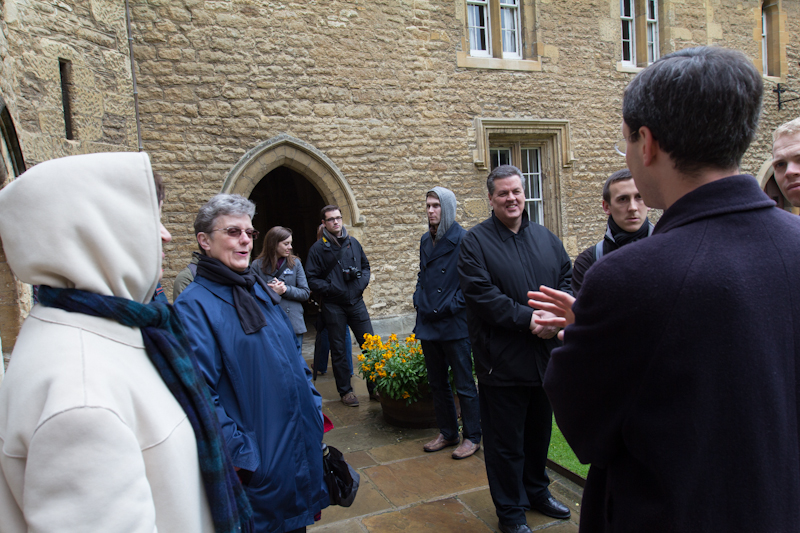 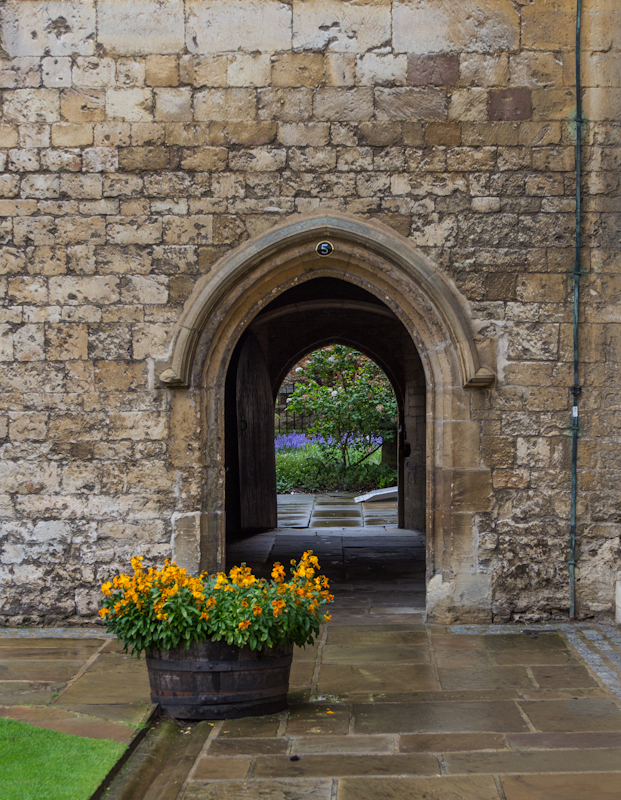 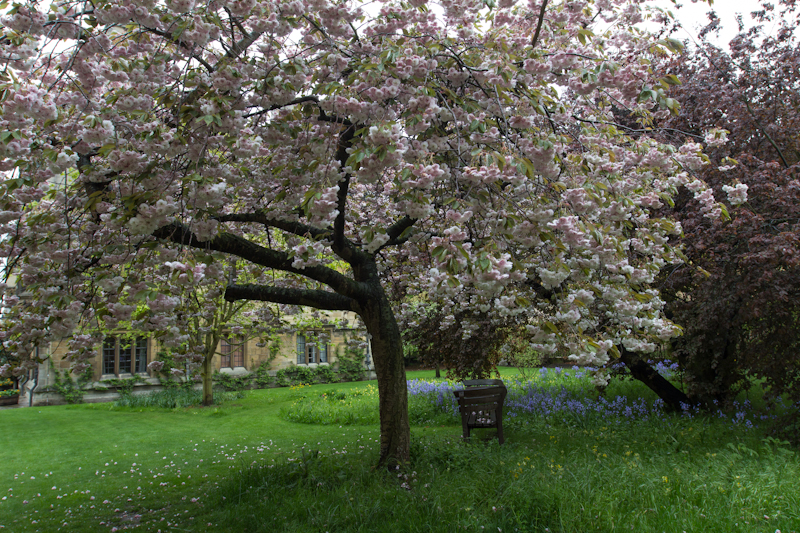 I'd like to sit on that bench on a warm, sunny day.

We then went to the chapel, which started out to be a cathedral. A king gave away the land they were set to expand onto, so it remained a chapel. It has an enormous rose window, but much of the glass in it is modern. As an important note, about half of the St. James Bible was translated into English at Merton College. 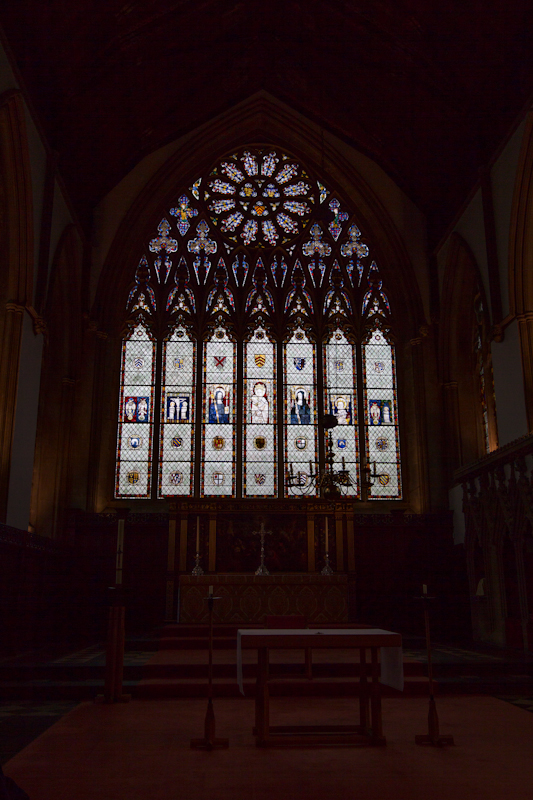 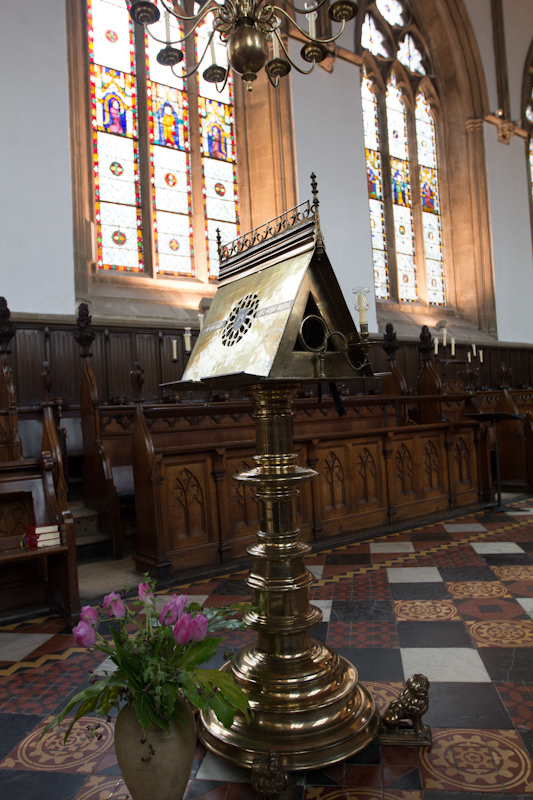 Medieval stand for reading standing up - as was the custom then. 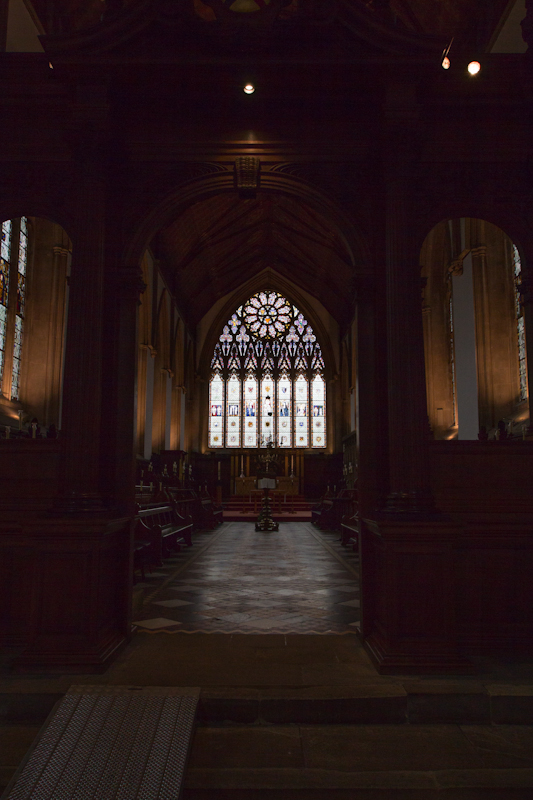 Looking into the choir area of the chapel 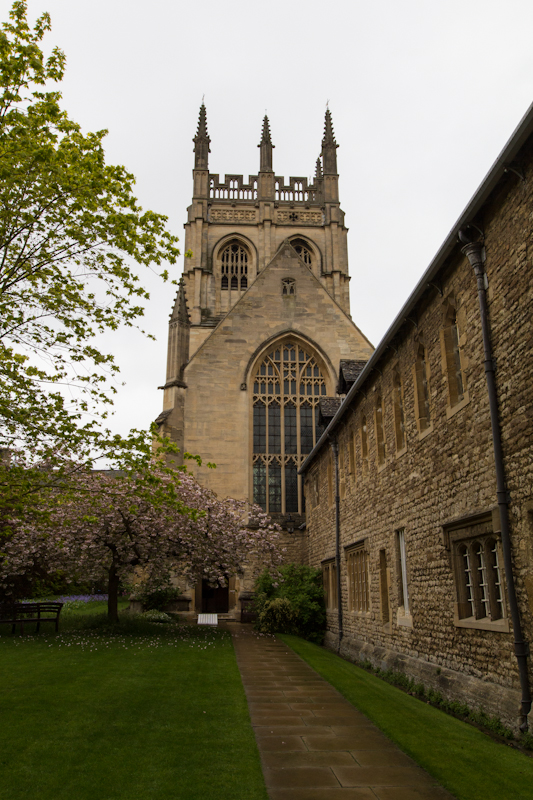 J. R. R. Tolkien was a Merton Professor of English Language and Literature. He was a close friend of C. S. Lewis—they were both members of the informal literary discussion group known as the Inklings,  which met at pubs – but also spent nice evenings in the Christ Church Meadow. 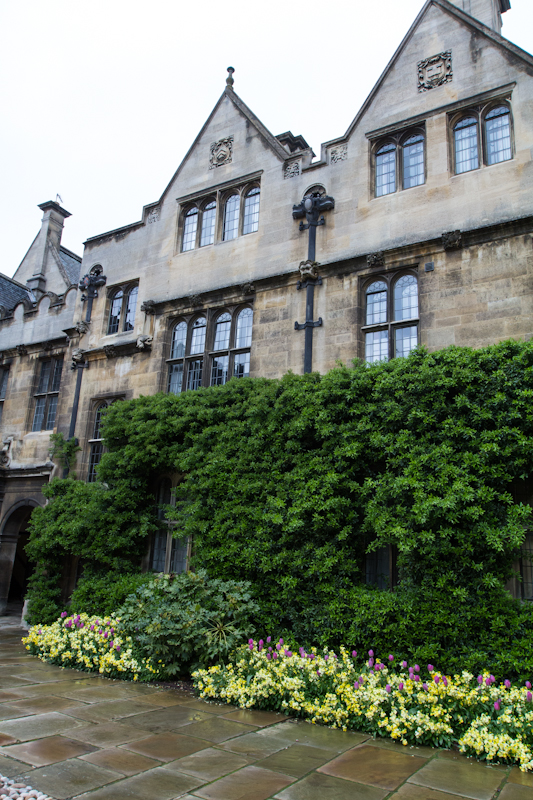 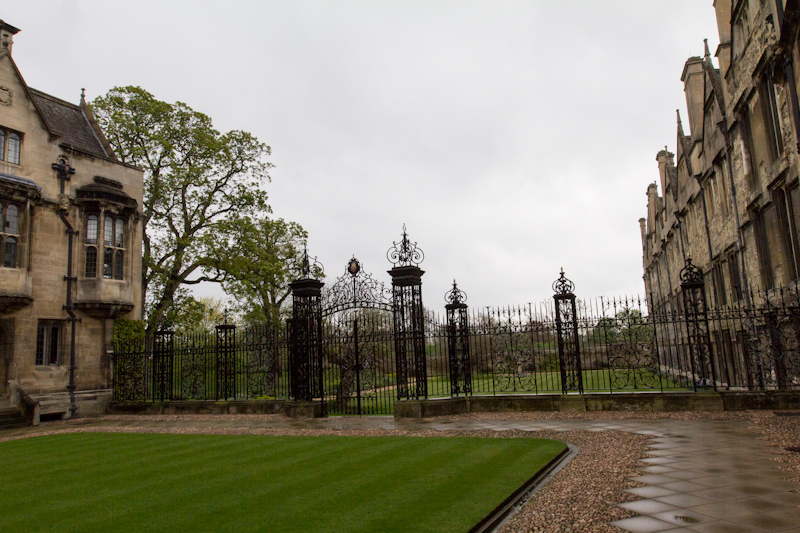 The meadows are through the gate

The grounds were beautiful, with grass BYU can only dream of. It’s that “green and pleasant land” again that only this climate can produce. And it is never, ever walked upon, so the mowing pattern remains pristine. We were told that if caught walking on it, the college porter would make vicious fun of the miscreant. We watched our step today.

We met again at the museum after our 5 hours of freedom to investigate and discover Oxford. A bit of blue sky started appearing in late afternoon to give our day a benediction. 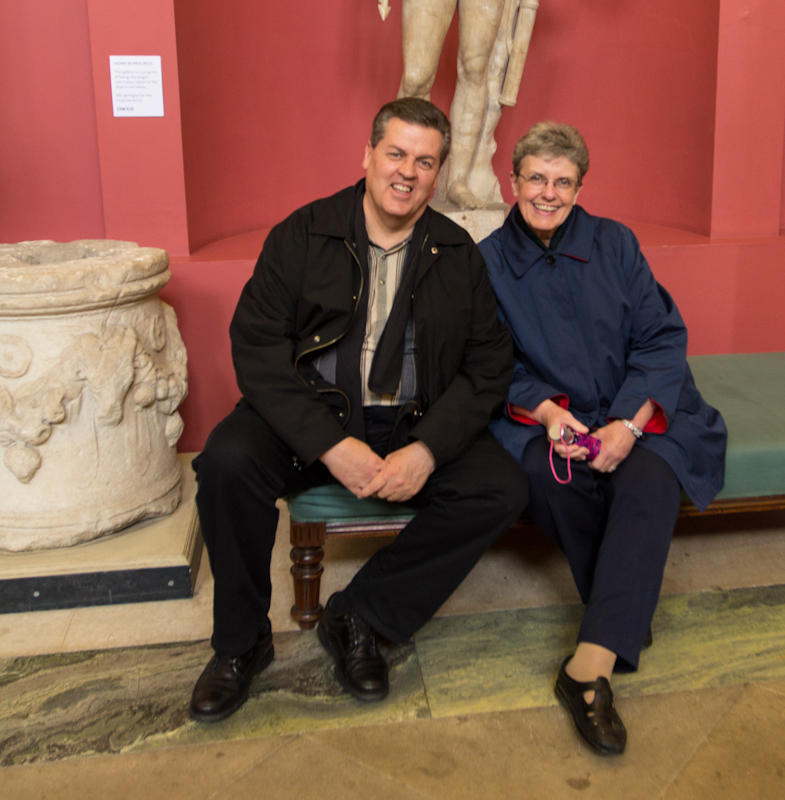 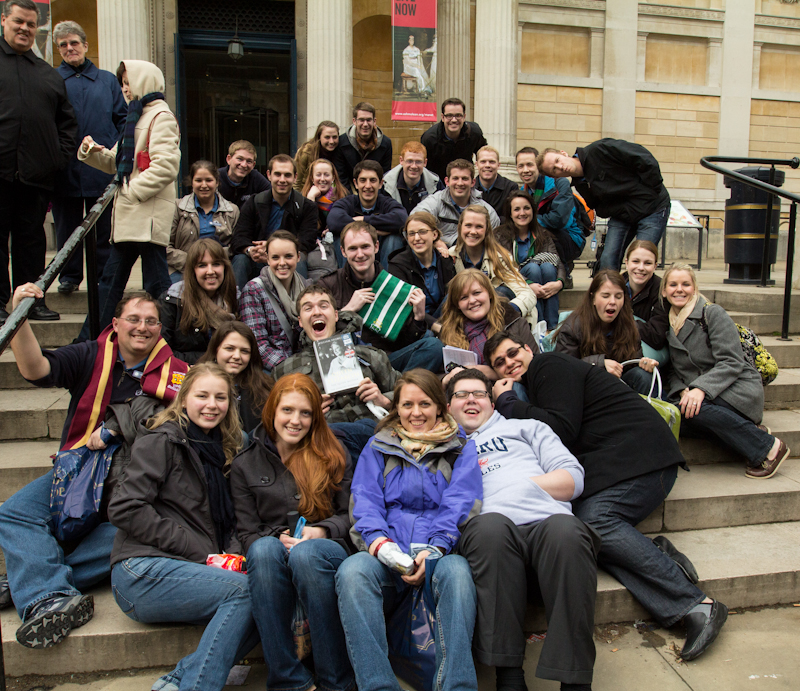 The Singers then walked to a Young Single Adult activity before being assigned tonight’s hosts. We hope all had a good time and will have a restful night’s sleep. The last five concerts of tour begin tomorrow night. 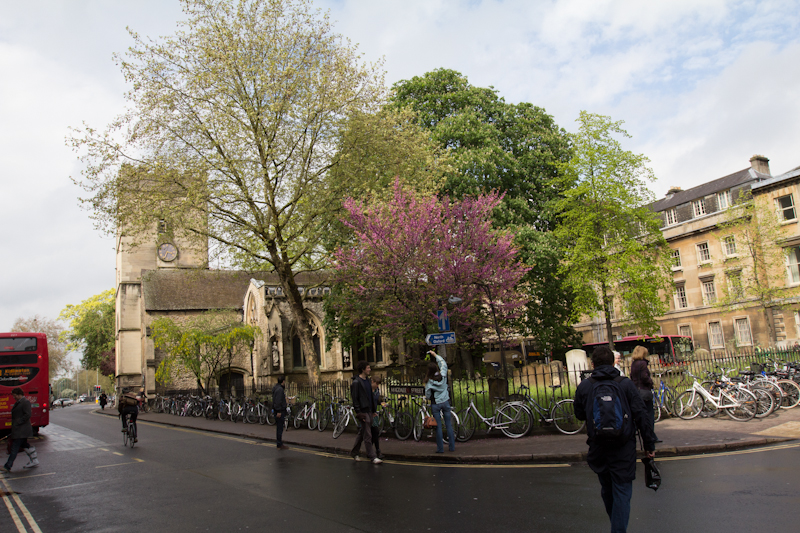 Bicycles are everywhere (and note the blue sky!) 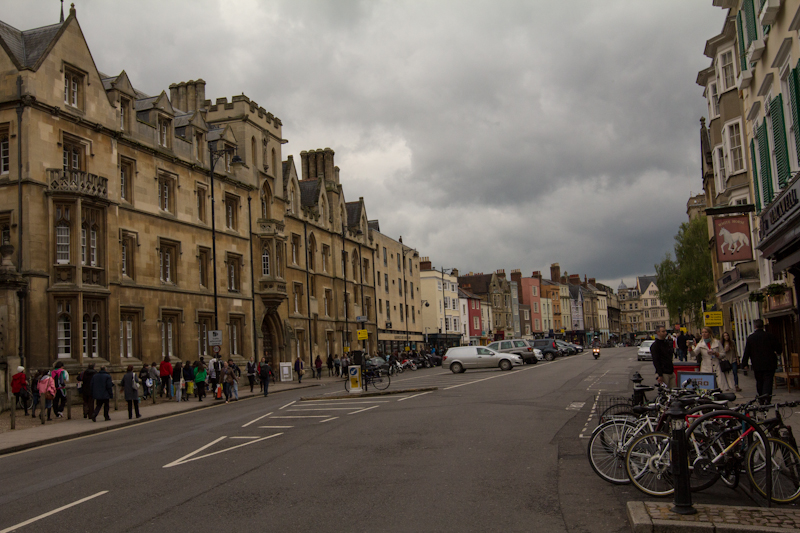