What happened on Saturday was a kind of magic and miracle that can’t really be described.

Breakfast that morning felt a little bit tense following the late dinner and concert the night before. There was a lot of talk among the Singers about what could have improved technically from our first performance, which pitches we were afraid might go flat or sharp, and whether our voices would return to full capacity by our competition call time that evening.

Dr. Crane in his wisdom and mercy sensed the tension and made what seemed like an unconventional decision: he canceled our rehearsal and told us to meet at the beach just before lunch! Those with sore voices were grateful for the rest, even if a little confused at the choice of venue.

At the beach, we found a little alcove on the side of the boardwalk and sat down for a true choral heart-to-heart. We talked about when we fell in love with choir, why we still sing and what we sing for now. It was special to feel the vibe of the choir becoming more enthusiastic and confident. We dusted off our voices just for a minute or two and then went through each piece for the competition with our vocal rays set back to “stun” to save some voce. As we sang through each song, a small crowd of local people began to grow and listen in on our little performance. Cameras and phones were out to take videos of us singing, and there were huge smiles on many faces. They especially appreciated our songs in their native tongue, Basque. Towards the end of our impromptu concert, when the crowd had grown especially large, a little girl was dancing to the music right behind Dr. Crane, which was enough to melt away the last of any vocal fatigue or anxiety. It was so healing to see the joy that our offering gave to the people there. Something lit up inside of us and we approached the competition with a more resilient optimism and confidence. 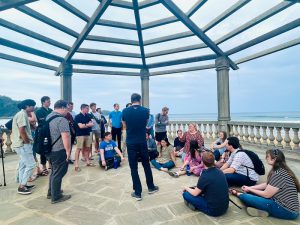 The choir’s meeting before the performance. 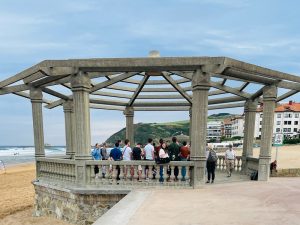 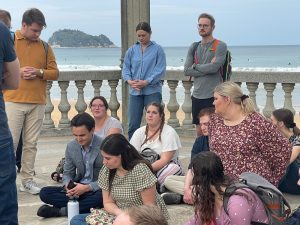 In rehearsals we are infamous for splitting hairs, fine-tuning the tiniest details that the finest ear couldn’t pick out. While that kind of diligence and commitment to musical excellence is the foundation of the BYU Singers sound, what made the difference on that competition night was our focus on connecting the audience, soul to soul. As we filed on stage for our sound check, Dr. Crane whispered three words to us that totally changed our sound: “Don’t strive, give!” BYU Singers is unique from any other choir in the world not only because our sound is different, but because we have a unique gift to give to every audience, the gift of Jesus Christ. 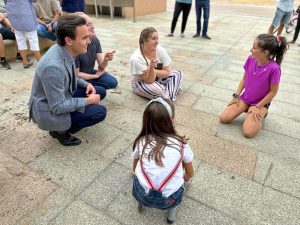 Interacting after the impromptu concert. 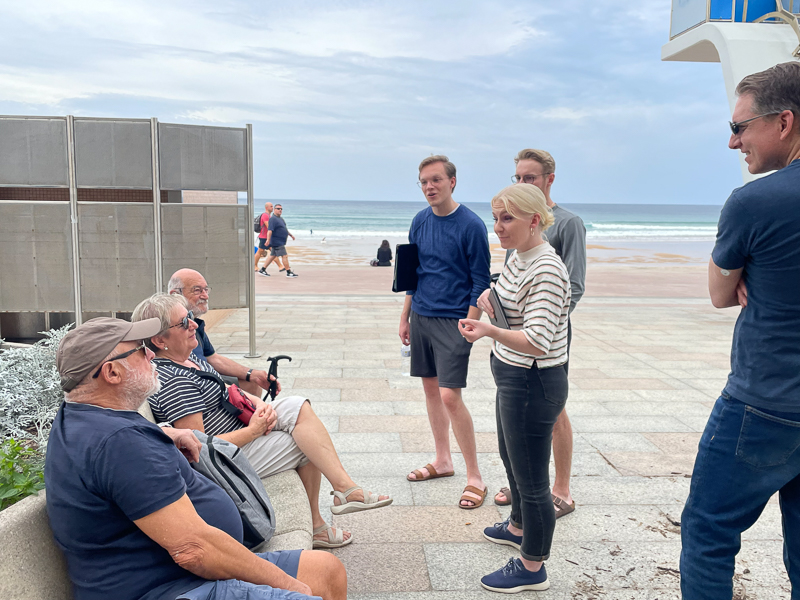 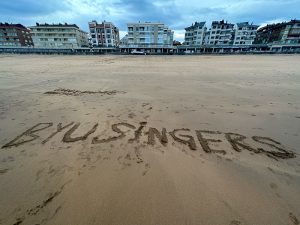 The competition was comprised of two sets: a “polyphony” set (which was a bit of a misnomer, considering most of our rep probably wasn’t primarily polyphony) and a “folk” set (designed to showcase each nation’s culture native music). These back-to-back concerts were glorious. We felt our hearts reaching out to the audience, longing to tell them the story we had, and they responded beautifully. Dr Crane and the choir were one arm, moving together in perfect unity. It’s a feeling unlike any other, and something none of us will ever forget. Moments like these help you more deeply understand what it really means for God to “consecrate your performance.” This one was certainly consecrated.

[The photographs below taken by the Tolosa Choral Competition.] 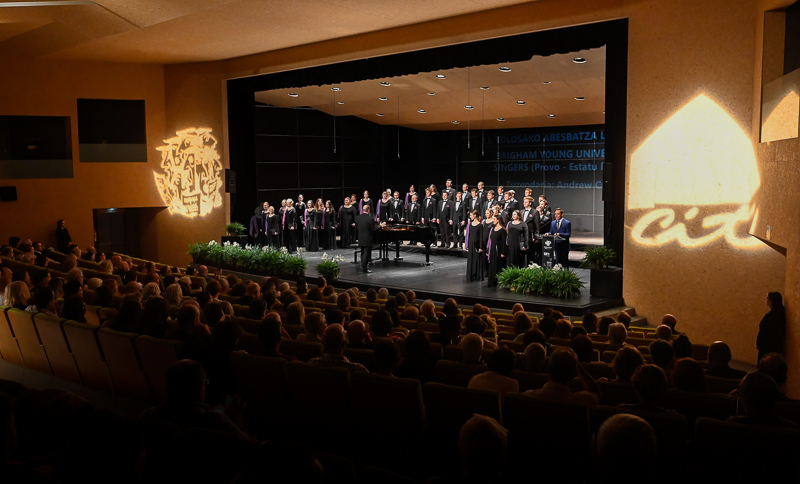 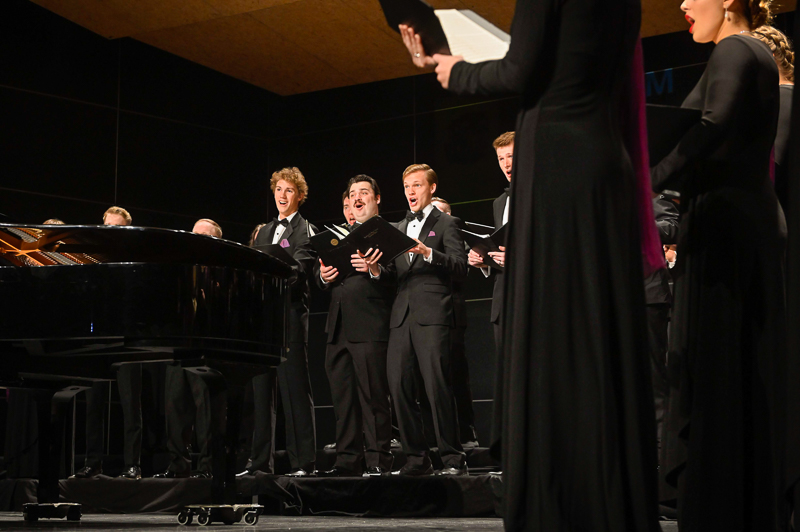 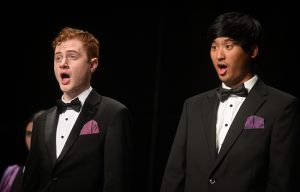 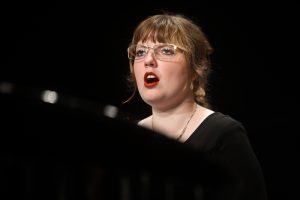 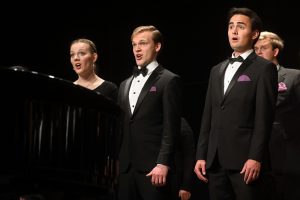 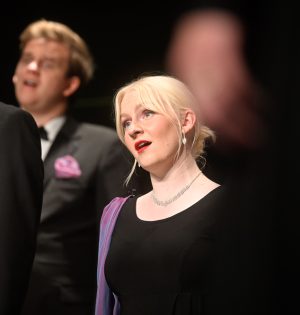 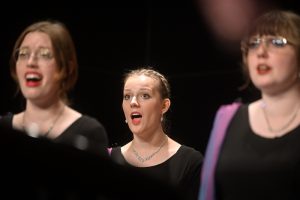 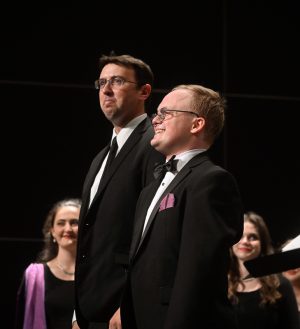 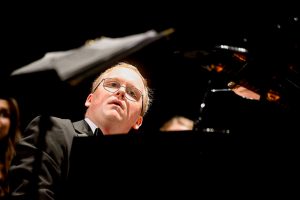 David Kime at the piano 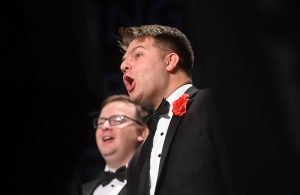 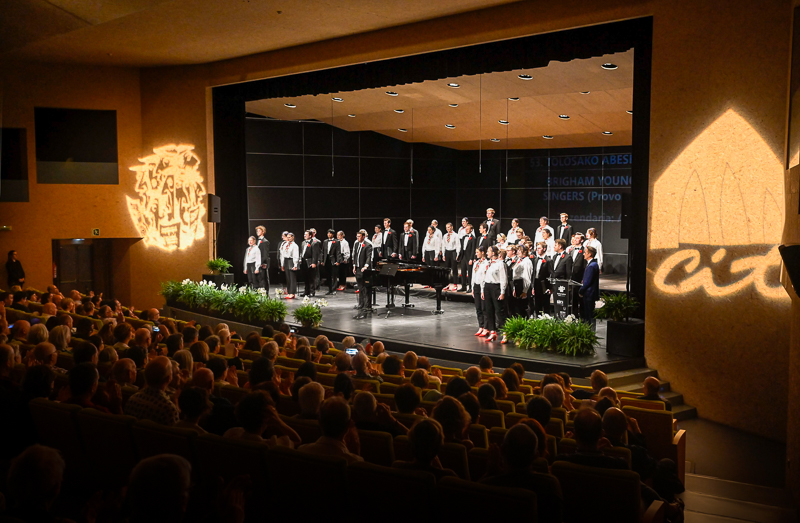 Acknowledging applause during the folk competition.

The audience must have loved the performance almost as much as we did! As we headed back downtown to the bus for some well-earned rest and more food from Hotel Zarautz, those who attended the concert literally lined the streets and cheered on the American choir passing by. It felt like something out of a feel-good sports movie! That feeling was enough to convince me to leave school again without WIFI for 8 days. We went home knowing that whatever the competition result, which wouldn’t be known until the rest of the choirs finished performing on Monday night, we had given the performance of a lifetime and sung better than anyone could have hoped. What a day to be grateful for!