We have had another day of magic here in Wales. After saying goodbye to our wonderful hosts who have taken such care of us for the last two nights in Wrexham, we set out on a spectacularly scenic drive to Merthyr Tydfil. (Most photos were taken from the coach.) 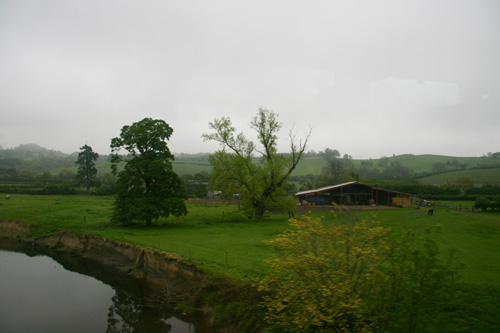 It is impossible to do real written justice to the greens of the hills and trees, the sudden appearance of little streams, or the low-lying clouds and mists on the distant mountains, with small villages snuggled into the valleys and perched on the hillsides. Once in a while we would have a little bit of blue sky that made the greens glow as if spotlighted. Fields of sheep, horses and cows with the spring young were everywhere. In fact, many sheep wandered the roads with us. It was a very winding and hilly drive that perhaps no coach should try to navigate, but drive it we did. The beauty we saw was equaled only by our relief at arriving in Merthyr Tydfil. 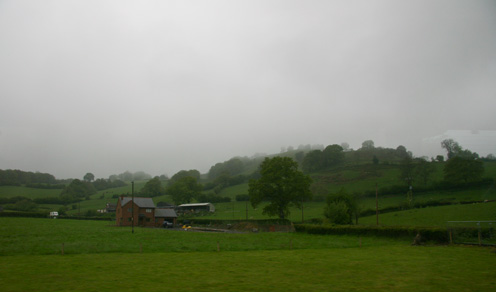 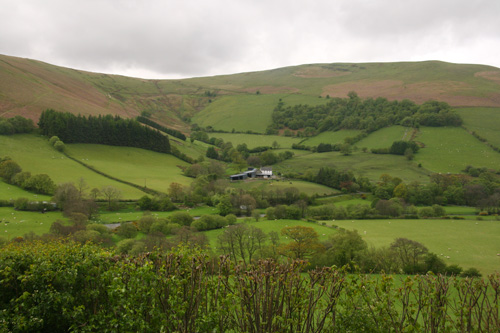 Note the hedgerows instead of fences. 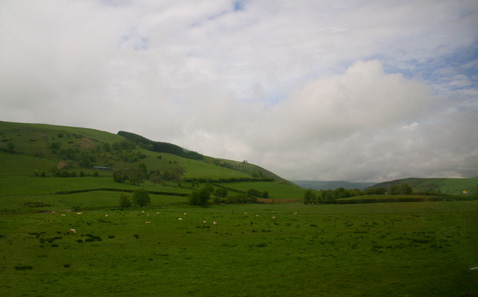 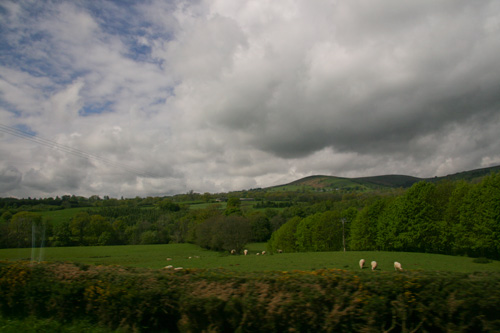 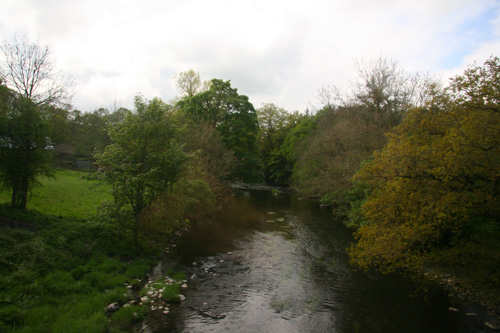 But first we stopped at the Big Pit to see a 200-year-old coal mine. We weren’t sure what to expect, particularly when we had to hand over watches, cell phones, cameras: anything with a battery that could potentially ignite the gases in the mine. All coal mines in the UK, including this one, were permanently closed during the 1980s due to labor disputes, and this one was turned into a museum memorializing a way of life in Wales. We wore a very heavy helmet with a headlamp, and also a 12-pound belt that held the battery for the lamp and a gas mask in case of carbon monoxide. It was very interesting to go down in the cage, and to learn of the methods and conditions from a former miner. He told us he missed the camaraderie of working the mine, but didn’t miss the danger and was grateful his grandsons wouldn’t be working there. The stories of conditions we heard were sobering, particularly the children as young as five who worked there before child labor laws were enacted. I plan to reread “How Green Was My Valley” when I return home. 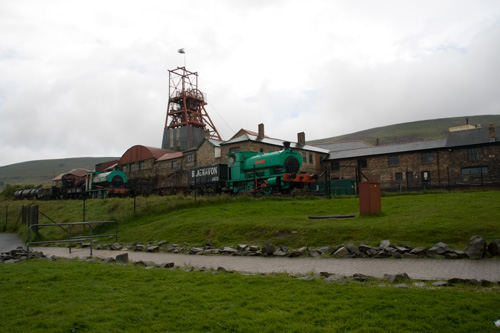 Entrance to mine museum 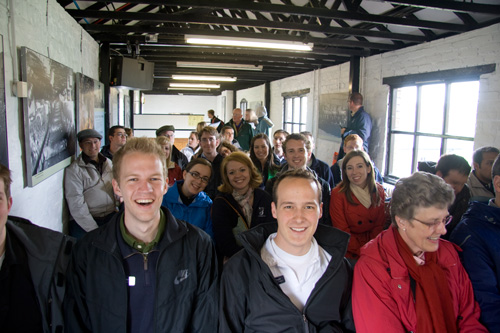 Waiting to enter the Big Pit

And now the magic began. This night in Merthyr Tydfil happened only because Dr. Staheli insisted that if Singers were to be in Wales at all, they must stop in Sister Hall’s hometown. Thus we made the planned detour south. 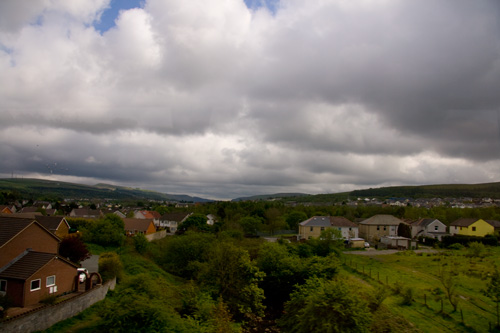 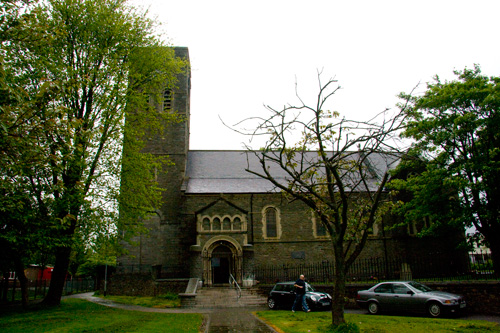 From the moment we first stopped at St Tydfil’s Old Parrish Church for a sound check and logistics reconnoitering, Sister Hall’s family enveloped us with care and love and much laughter. Three of her four brothers and her sister were the entire committee who planned every bit of our stay there, from concert arrangements to host families to dinner Friday night and breakfast Saturday morning; even sending us on our way Saturday with sack lunches for 45. We’re not sure they ever got to bed Friday night. They were really the reason for the huge success of the concert. 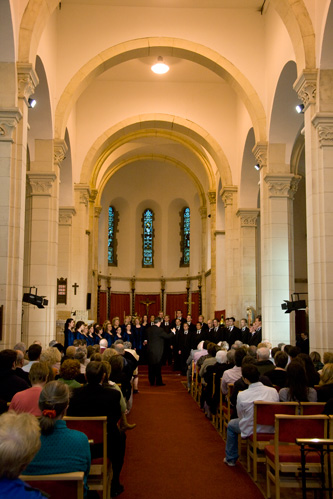 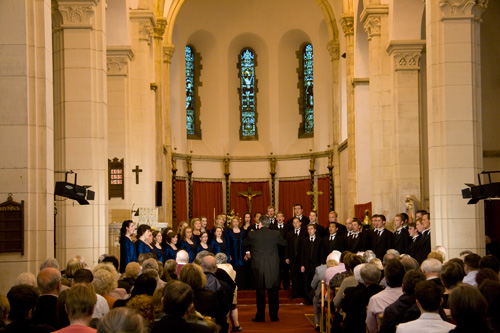 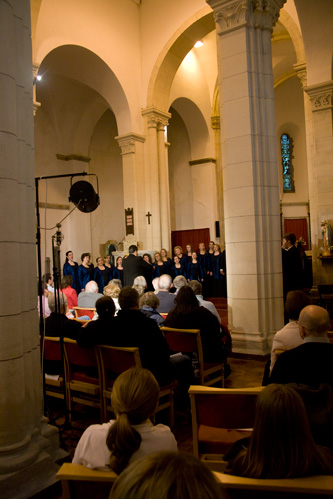 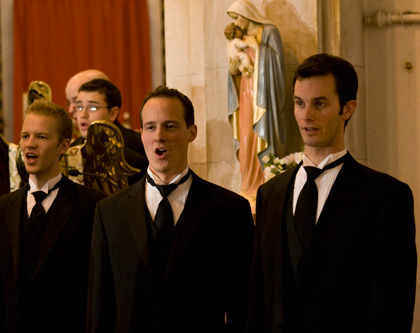 The church was beautiful and had incredible acoustics; it was so gratifying to sing there. Sister Hall chose a concert of her favorites from the Singers repertoire that she was sure her friends and family would love, and indeed they did love all they heard. 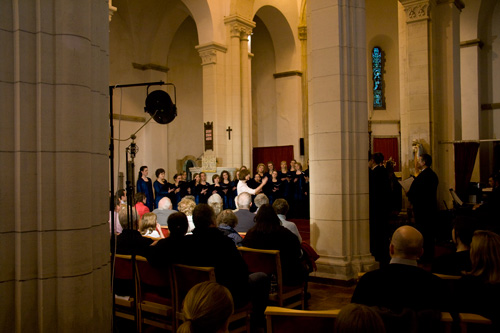 I don’t think any of the audience was expecting the quality of the choir nor the beauty and variety of their repertoire. From hymns and folk hymns and revival songs through “Leonardo,” Mawby’s “Ave verum,” the settings of old Irish songs, Gershwin and then the encore of “She’ll Be Comin’ Round the Mountain, they were entranced. It didn’t hurt one bit that Sister Hall conducted three of the pieces, and very obviously loved and was loved by most of the audience. One musician in the audience chatted with me, expressing relief there was such a large audience. She said, ”Welsh mostly just go to concerts by male choruses and brass bands—I wasn’t sure anyone would come!” I believe she was just as pleased by the concert as by the attendance.

During the concert, Dr. Staheli dedicated “Homeward Bound” to Sister Hall in acknowledgement of the loving group of family and friends she left behind when she moved to the USA twenty years ago, and in gratitude for the large number of students whose lives she touches at BYU. Tears were already flowing. 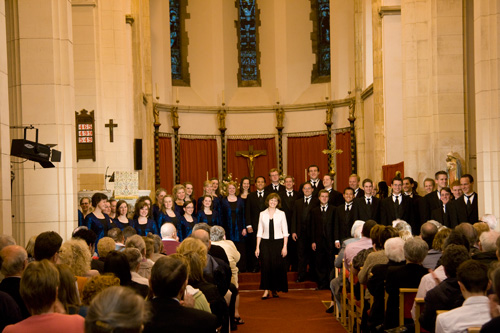 “Homeward Bound”
In the quiet misty morning when the moon has gone to bed,
When the sparrows stop their singing and the sky is clear and red.
When the summer’s ceased its gleaming,
When the corn is past its prime,
When adventure’s lost its meaning,
I’ll be homeward bound in time.

If you find it’s me you’re missing, if you’re hoping I’ll return.
To your thoughts I’ll soon be list’ning, and in the road I’ll stop and turn.
Then the wind will set me racing as my journey nears its end.
And the path I’ll be retracing when I’m homeward bound again.

In the quiet misty morning when the moon has gone to bed,
When the sparrows stop their singing,
I’ll be homeward bound again.

-Music and lyrics by Marta Keen

At the end of the gorgeous concert, we took a group photo with the committee of siblings and Sister Hall’s father, who sat in the front row and appeared to love the concert. 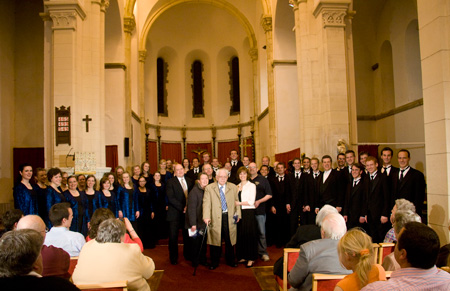 After the presentation of gifts of thanks to them, we thought we were finished. But they had a gift for Dr. Staheli of a safety lamp, which we had seen one of and learned about that afternoon at the mine. It was used to identify any gasses in the mine; the size and shape of the wick’s fire served as an alert. Ralph Pulman, who presented it, explained that it now represents the light and safety and security of the gospel in our lives. 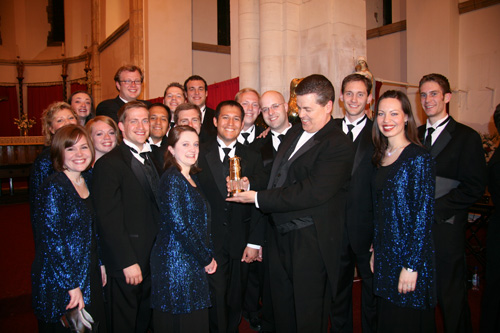 With the safety lamp

And then a sister stood up front; we were expecting a closing prayer. Instead, she began an a cappella song, and we were transfixed. As one, the audience stood and began singing the verse with her of “We’ll Keep a Welcome in the Hillsides,” which is a traditional Welsh song that is sung whenever anyone leaves. (And let me tell you, Welsh audiences sing like you cannot believe!) 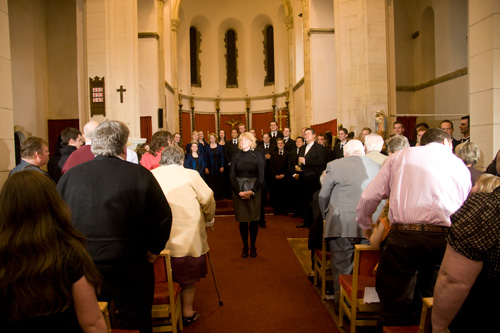 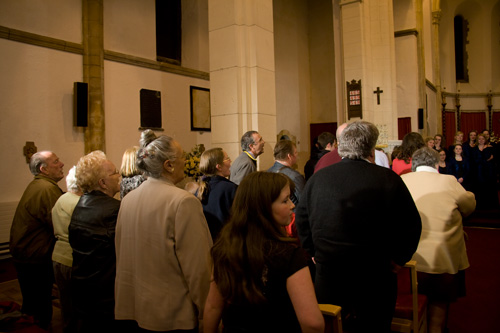 Far away a voice is calling,
Bells of memory chime,
Come home again, come home again;
They call through the oceans of time.

This land of song will keep a welcome,
And with a love that never fails,
We’ll kiss away each hour of hiraeth (a longing or yearning for home)
When you come home again to Wales.

By this time I think the entire choir and leaders and many of the audience were awash. This was truly a night all of us will remember. Most of us hope to come again to Wales.

It was difficult to break away from all who wanted to talk with Sister Hall and Dr. Staheli and the choir members, but eventually we did have to take the coach back to the chapel to retrieve luggage, meet our hosts, and go home for the brief night’s stay before moving on to Liverpool.