The choir attended three different wards or branches in the morning. Two of the branches were in townships, and those of us there were thrilled with the Spirit evident, and the warmth of the members. Hugs and handshakes from the members were the order of the day. And the singing! I wish you could hear the black members sing. It puts us all to shame.

18 of us were hosted to an incredible dinner at the mission home that afternoon. The senior missionaries and Pres. and Sister Egan were so very gracious and fun, and the mission home itself is beautiful.

Then back for the very final fireside. The reality of tour ending hit many of the choir hard, especially those who were saying goodbye to the Singers experience. But what a great way to end! I think it may have been our best fireside of the tour, and that’s saying something. Ending the tour with our testimonies through song and text is probably the ideal way to say farewell to a country and its people who we have learned to love so well.

Maybe that heading says enough. But I will say more. We began the day with the most beautiful sunrise I have seen in some time. Then we were taken to the Green Market to complete all the shopping that just HAD to happen on tour. The challenge was figuring out how to get it onto the plane since most of the luggage was packed. This choir is nothing if not creative, and some very interesting pieces were carried on as hand luggage. South Africa airlines did their part to make our return trip challenging, as some checked luggage was checked through to SLC, but some to only D.C. Some of us got the needed 4 boarding passes, and many only received 2. That made the customs and passport control experience at Dulles a bit stressful as there was less than two hours between flights to clear customs and sort out luggage and boarding passes. Somehow we all made it through, but not with very many minutes to spare, and without much organization or help from United Airlines. We started losing Singers once we hit the States as they left for various connecting flights to take them home. It was a very, very long day, but we survived the 36 interminable hours of flying, and arrived back in Provo around 2 p.m. All people made it, but five pieces of luggage are still wandering around the US, as of the last report. Goodbyes were said to those who traveled that far together, and loved ones were greeted warmly. There were some extremely joyous reunions. (I’ll leave that to your imaginations.) 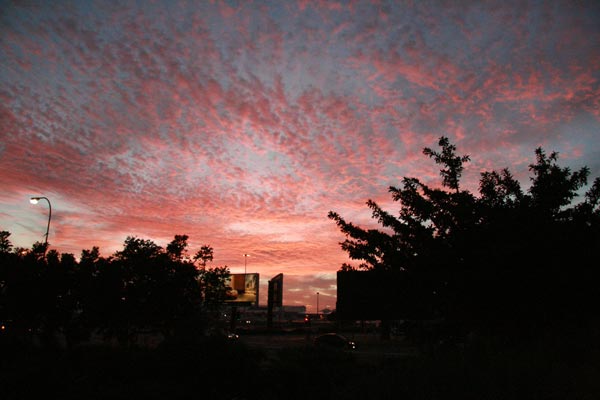 Sunrise on the final morning 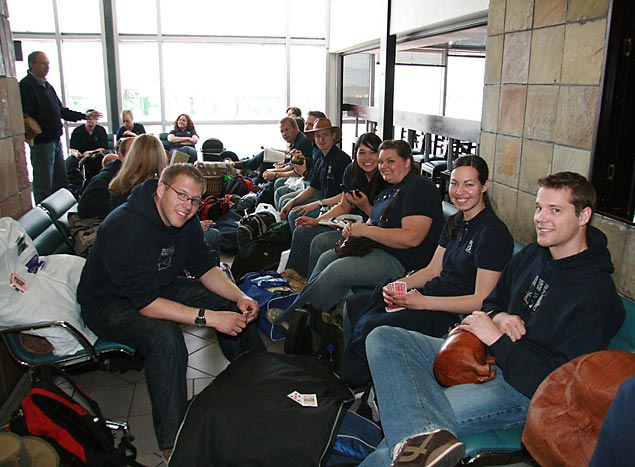 At the Capetown airport

And now that the tour is over, so is this blog for a while. Thanks to so many who sent in comments, even though I didn’t have time to really read them all until we returned. I’m glad you enjoyed following us through South Africa. It really was a remarkable three weeks, and a tour that none of us will ever forget. We were on the go continually, meeting people, singing concerts and firesides, giving workshops, singing at schools, fitting in some sightseeing and shopping, and learning to love South Africa and its people. Now comes sleep and assimilating all we experienced, as well as viewing and editing all of the many photos that were taken.

With appreciation to you all,