We’ve had a phenomenal first day in addition to a day-and-a-half of travel as we begin another international tour for BYU Singers. This year’s tour to Indonesia and Vietnam is the first international tour under the direction of Dr. Andrew Crane. The Singers are certainly excited to be here after an entire year of anticipation for this exciting adventure.

We met bright and early (or perhaps not so bright) at 6:00AM to gather in the bus and ride together to the Salt Lake Airport. Even with perhaps the longest airport security line that Salt Lake has ever witnessed, we all made it safely to our gate and were off to the Los Angeles International Airport for the first of many layovers that we would face. 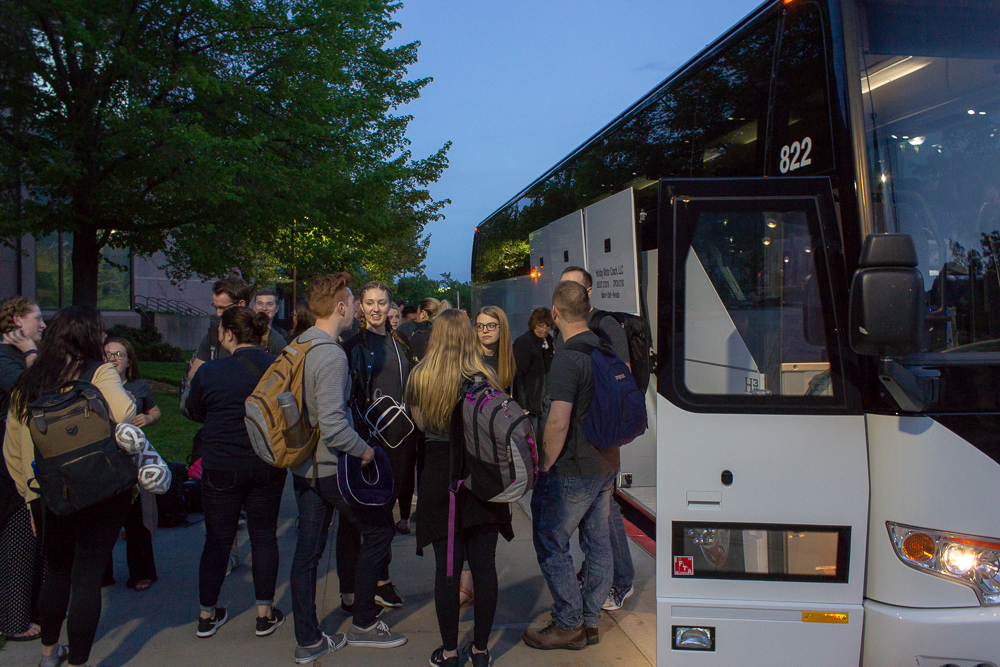 BYU Singers meeting before their departure 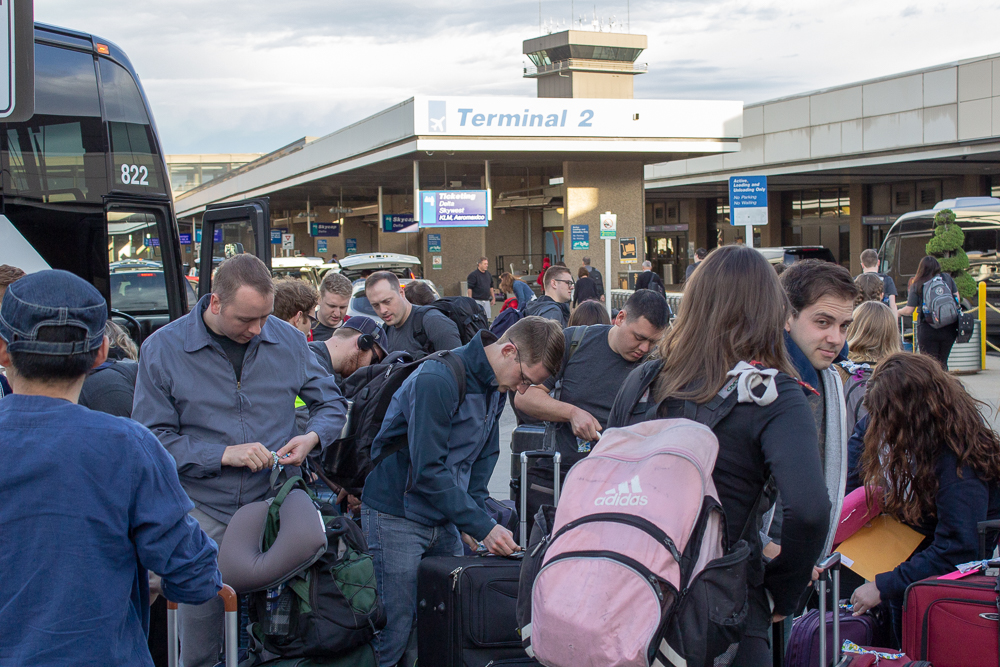 Arrived at the airport, ready for 37 hours of travel

Before departing on our next flight, we were able to go to the nearby Hyatt Regency for a two-hour rehearsal—a great way to break up a seven-hour layover! After partaking of much needed refreshments provided by the hotel, BYU  Singers were able to rehearse several new Indonesian pieces that they will be performing with different groups in the coming weeks. 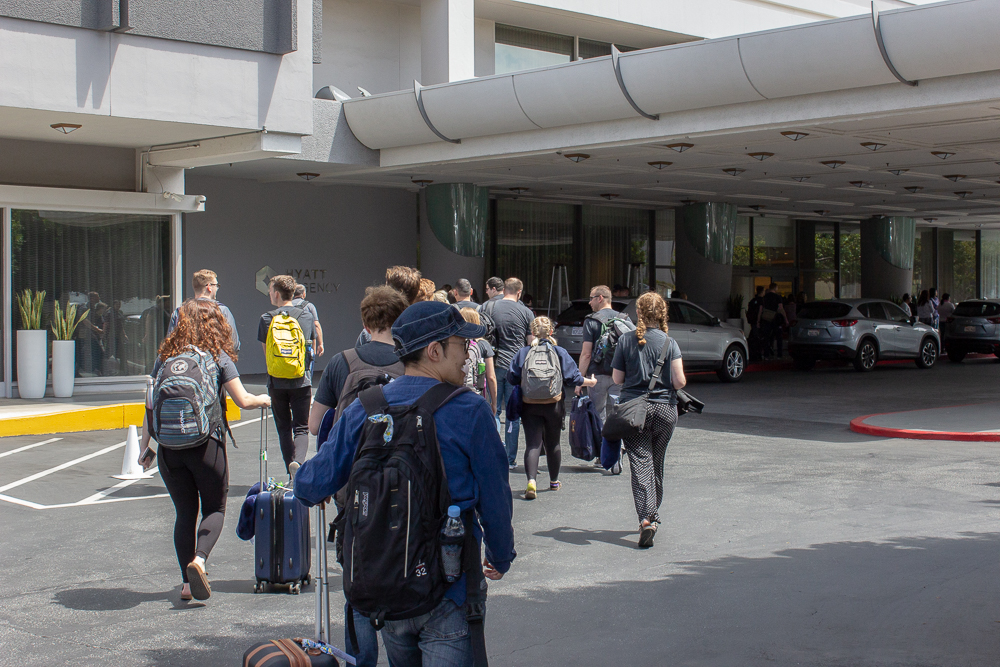 Arriving at the Hyatt Regency in Los Angeles 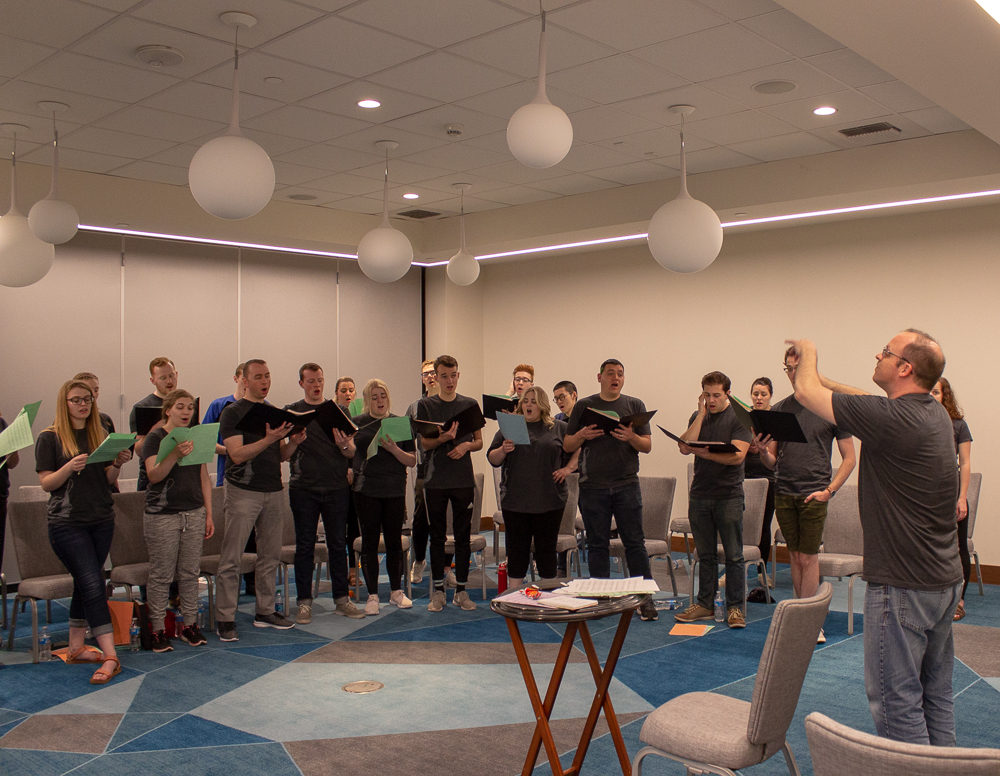 A rehearsal during our layover to learn three new Indonesian pieces

After rehearsal, we returned to the Los Angeles airport to get lunch before boarding the plane for our 13-hour flight to South Korea. Luckily, the in-flight entertainment was topnotch which made the long flight much more bearable. From South Korea we then traveled to Singapore before our final flight to our first tour destination—Jakarta, Indonesia.

We were all understandably very tired at this point, but the joy that we felt by finally being in this country greatly outweighed our exhaustion. We first met Patrick, Roy, and Harry, our tour guides who will join us throughout our time in Indonesia. They helped us exchange some currency in the airport, and then we were off to see some sights in the city! 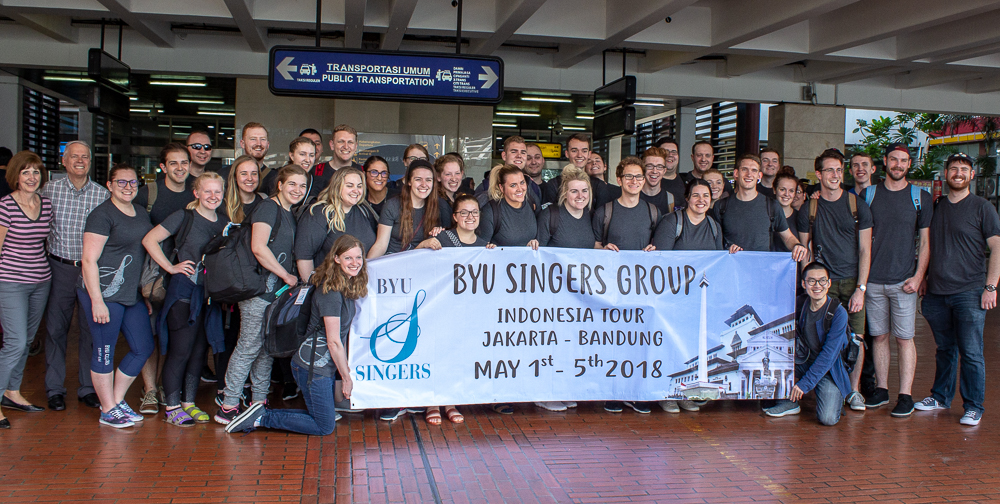 A loving welcome to Indonesia for BYU Singers

First we went to Batavia Square where there were several museums that we visited; our guides through these museums were able to explain a little bit of the history of Indonesia to us. Probably the most memorable experience of walking around Jakarta was the incredible numbers of people waving at us and asking to take pictures with us. I guess it’s not every day in Indonesia that you see a group with many fair-skinned, light-eyed individuals. 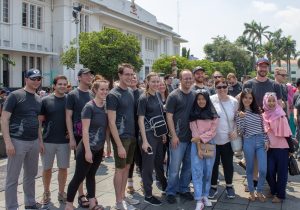 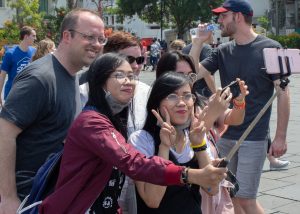 After an impromptu photo session with the citizens of Jakarta, we were taken to the Le Grandeur hotel to have a delicious buffet lunch. The lunch was delightful, and there wasn’t anything that made anyone’s stomach turn. From lunch, we then went to check into our hotel where we will be staying for the next two nights. We had a few hours to rest a little bit and to take a much-needed shower. Many Singers powered through without a nap in order to beat jet lag with a good night’s sleep later tonight. Needless to say, not all of them were successful.

This hiatus from the day didn’t last for very long, however. We left our hotel at 5:00PM (4:00AM in Utah) in order to rehearse for two performances that will take place tomorrow. The Singers had the immense privilege of rehearsing tonight with the Batavia Madrigal Choir—an incredibly talented local choir in Jakarta. The Singers will be performing in concert with this choir tomorrow night, joining together to sing Hela Rotane and The Music of Stillness. Tears filled many eyes as these two incredibly talented choirs came together to sing two very contrasting pieces in such perfect harmony. We are extremely excited for what tomorrow will bring and especially to see the audience’s reaction while the Singers perform together with the Batavia Madrigal Choir. 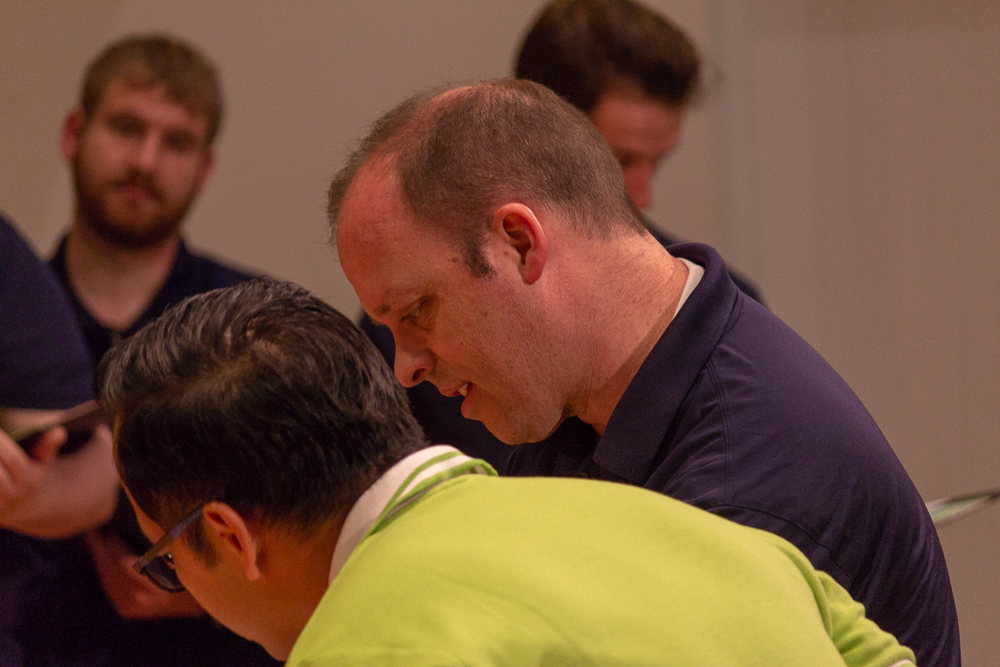 Working on the Indonesian diction with the Batavian Madrigal Singers 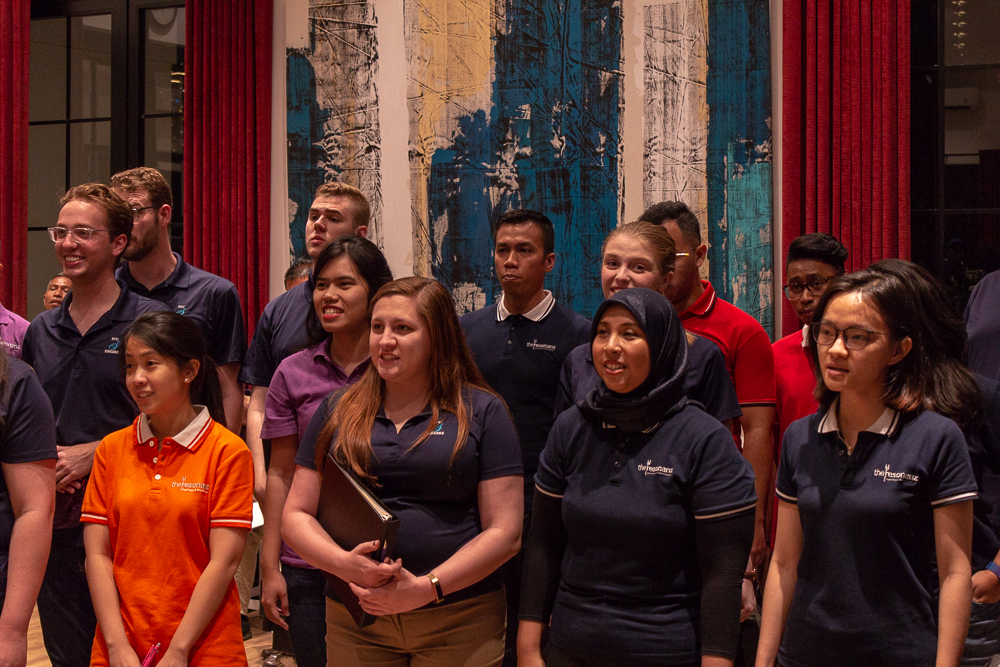 A powerful rehearsal with the Batavian Madrigal Singers 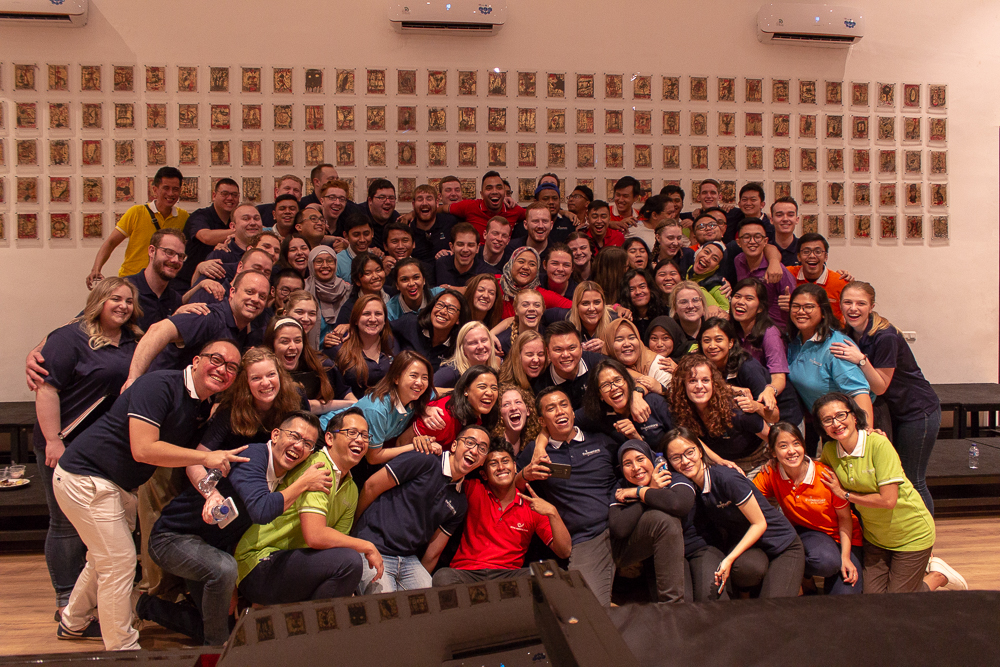 Joining our new friends in one big group hug