We began the day with a continental breakfast provided by the hotel here in Hanoi, after which we were off for a little bit of sightseeing to begin our day. First, we visited the Vietnam Museum of Ethnology where we were joined by our beloved university president and his wife, President and Sister Worthen, along with the international Vice President of BYU, Sandra Rogers. They will be with BYU Singers for two days of performances and sightseeing in Hanoi. 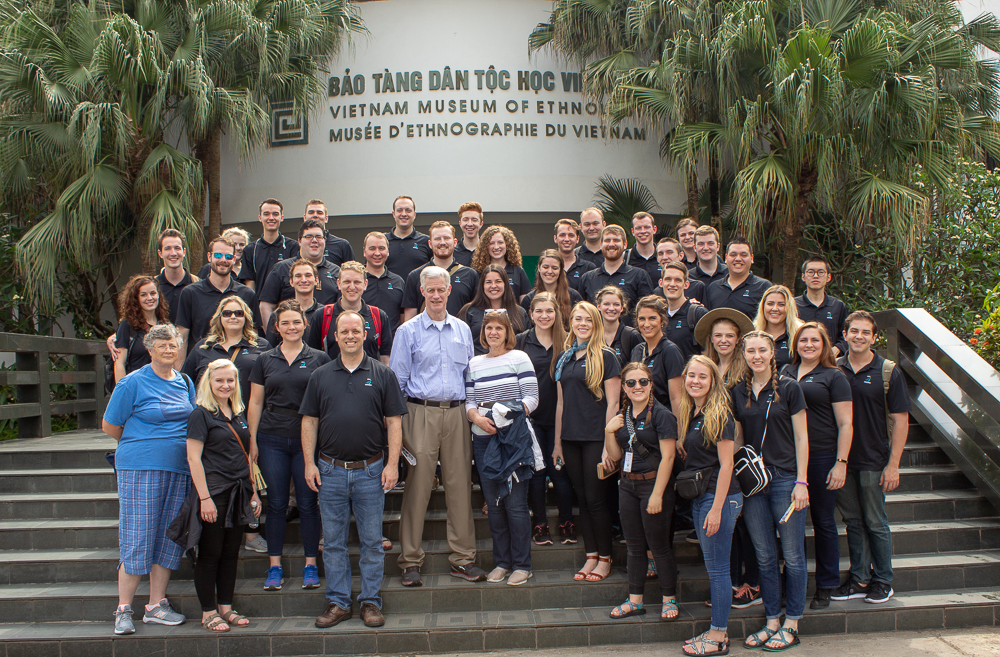 We enjoyed a tour of the Vietnam Museum of Ethnology and learned more about the indigenous people of Vietnam. Near the end of the tour while the choir was looking through a small souvenir shop, one of the workers requested a song. BYU Singers obliged and sang Hela Rotane for a small, captivated audience. After the Museum of Ethnology, we were bused over to a location where we each entered our own rickshaw, a vehicle where the passenger sits on the front and a driver sits on a bicycle attached to the back. We rode through the streets of Hanoi through the crazy traffic, but with the very aware driving of the Vietnamese, we all arrived safely at our destination—the Hoa-Lo Museum. 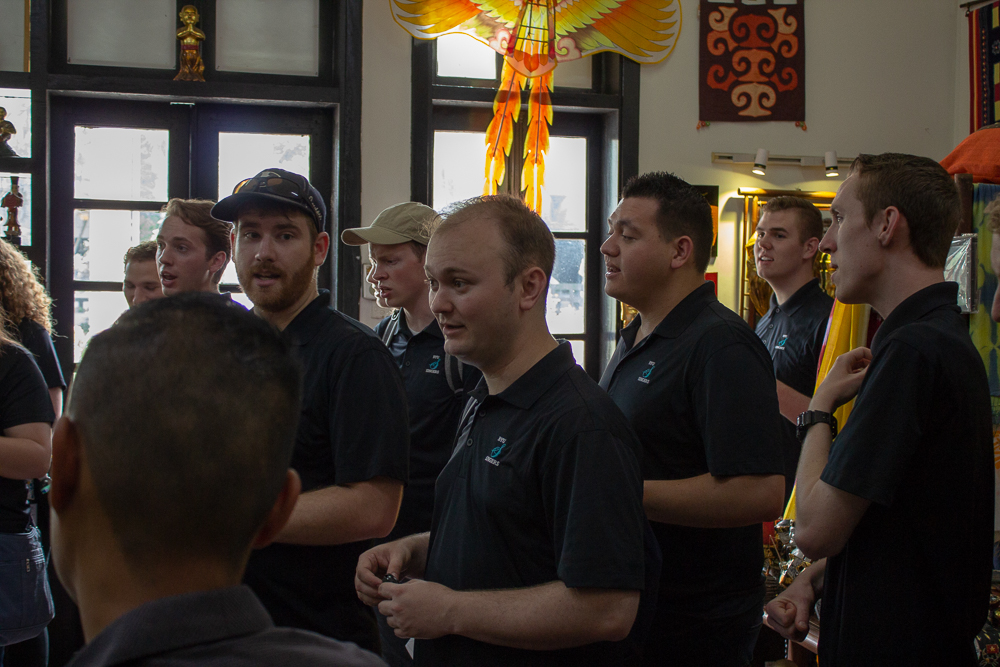 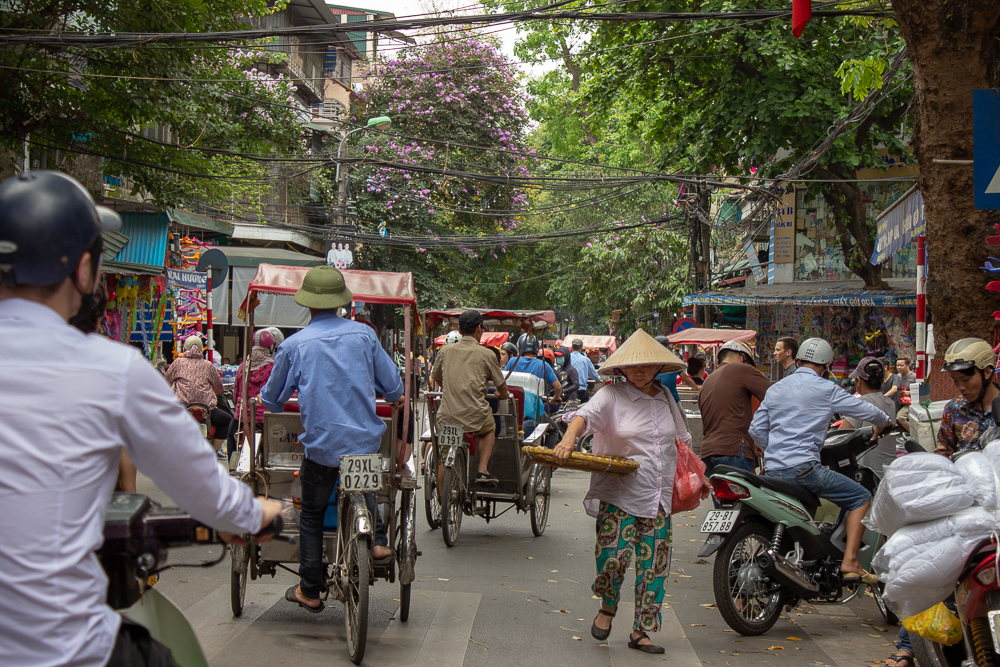 Riding through Hanoi in rickshaws

The Hoa-Lo museum was a prison used by the French colonists who were in Vietnam throughout the early 1900s. The prison was then later used as a location for US Prisoners of War during the Vietnam War. We walked through the rooms where many of these prisoners were kept, and it was definitely an eye-opening experience for many members of the choir. We then went to lunch at a local restaurant before heading to our performance venue for a rehearsal.

The Hanoi Opera House was our venue for the night. It’s a beautiful building with tiered seating and a large, bright stage. Once we arrived we were able to rehearse a combined piece, When the Trumpet Sounds, with the Military University of Culture and Arts (MUCA) Choir. BYU Singers were very excited to sing with this incredible group of people in such a beautiful building. After this quick combined rehearsal, BYU Singers then continued to rehearse a few other pieces for their concert tonight. We had a chance to go back to the hotel to change, and then we were taken to one of the most esteemed restaurants in Hanoi for dinner. Needless to say, we were very satisfied after our meal. 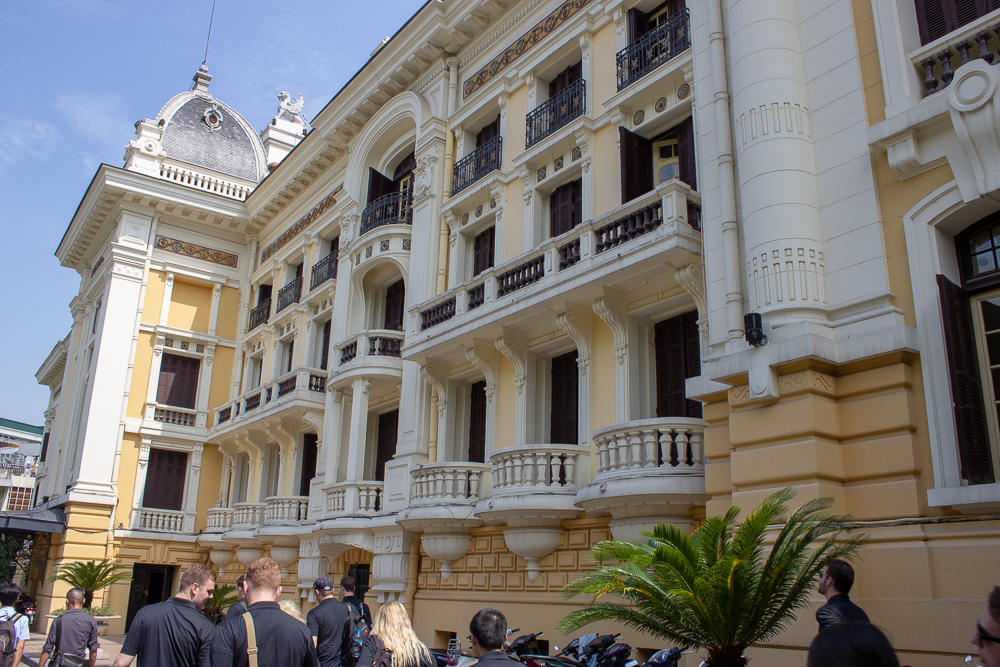 The exterior of the Hanoi Opera House 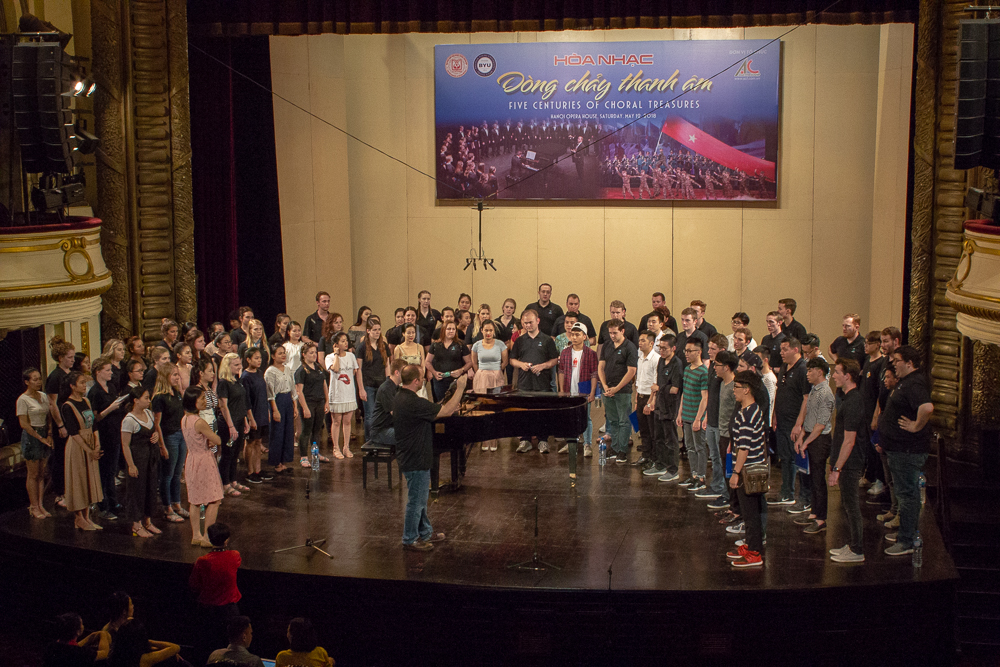 Rehearsal together with the Military University of Culture and Arts Choir 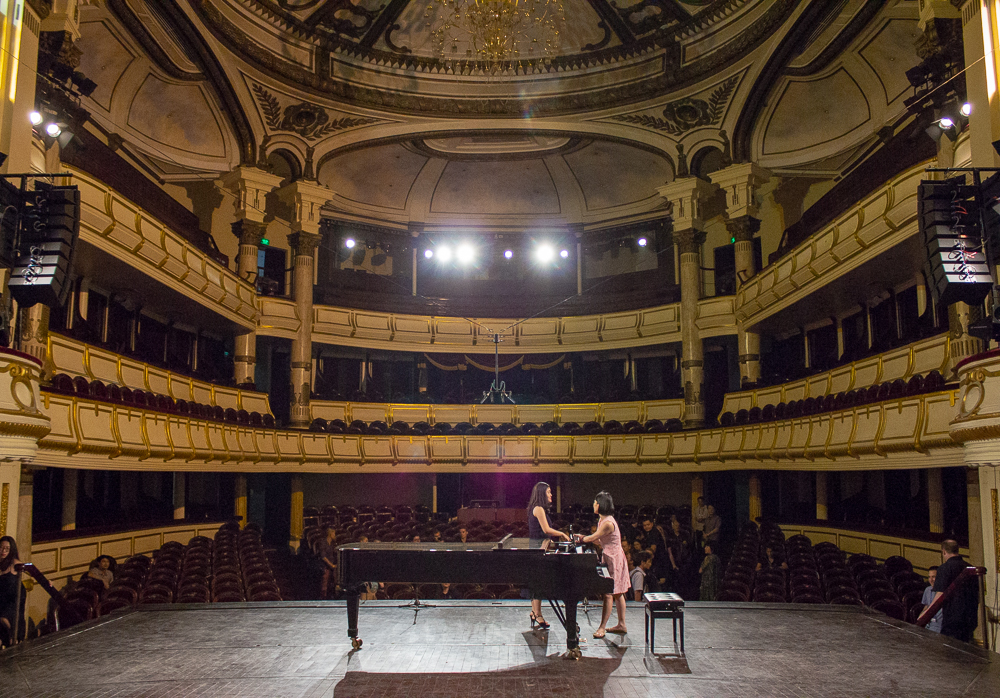 The interior of the Hanoi Opera House

Once dinner was over, we then returned to the Hanoi Opera House for the performance. President Worthen assisted in hosting a VIP reception before the concert, so many government officials and church representatives were in attendance at the concert tonight. The performance was beautiful, and the audience reacted very positively to the Vietnamese piece that the choir prepared, Nguoi O Dung Ve. This is a classic Vietnamese folk song, and the crowd immediately began to cheer as they listened to those familiar words ring in their ears. One of the highlights of this tour is consistently being able to touch the hearts of people in other countries by performing songs that are familiar to them. 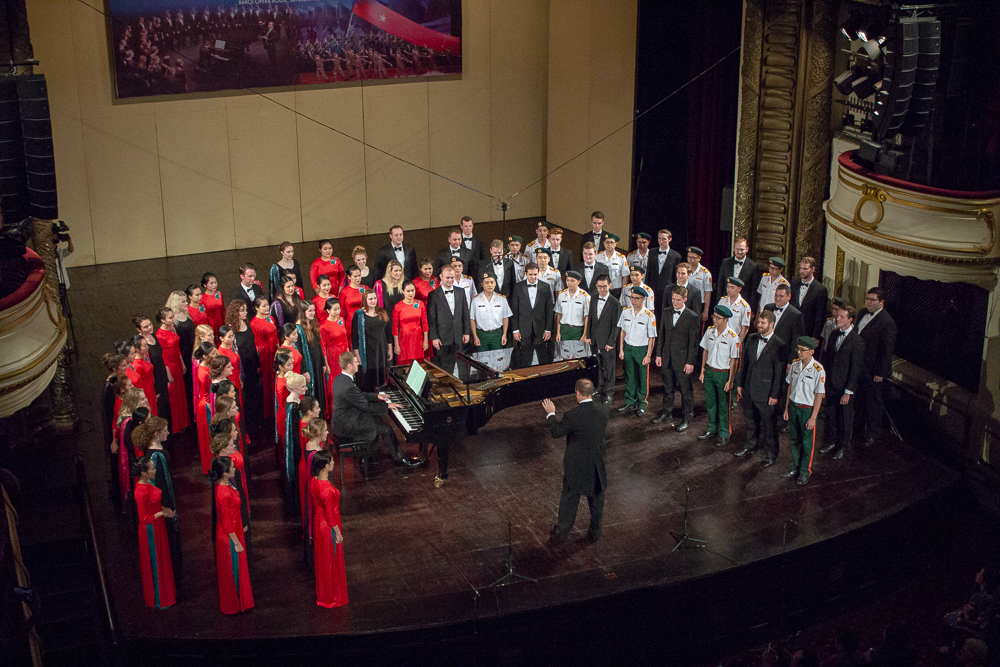 Combined performance of When the Trumpet Sounds 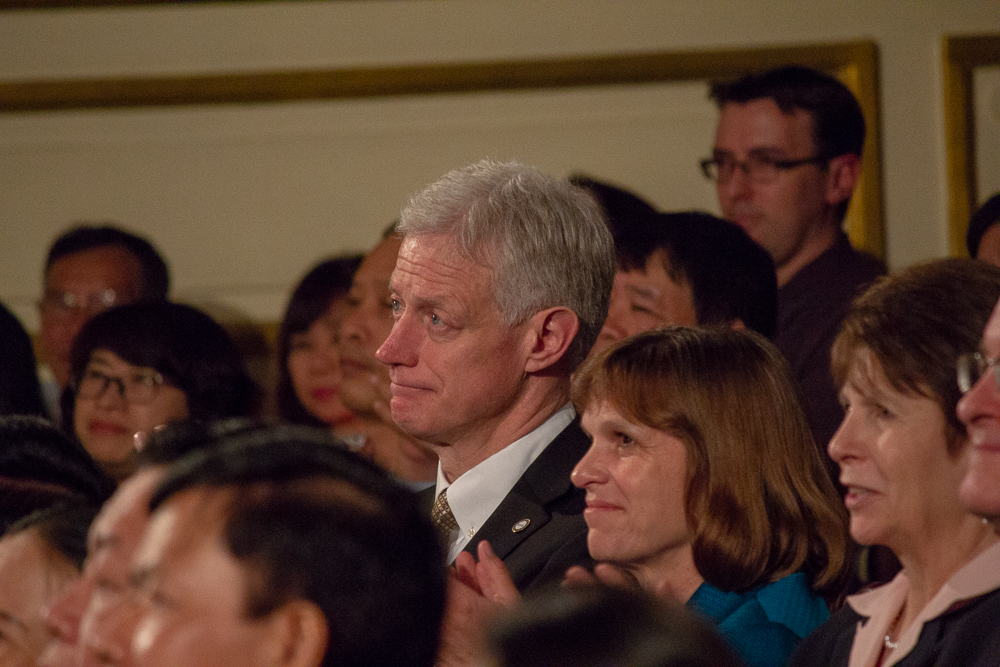 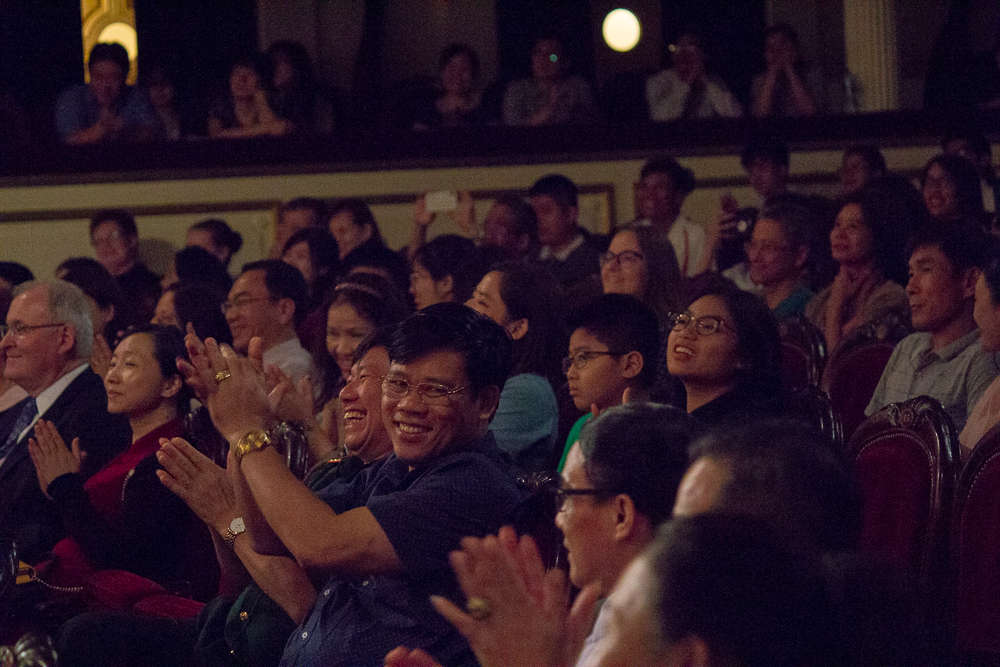 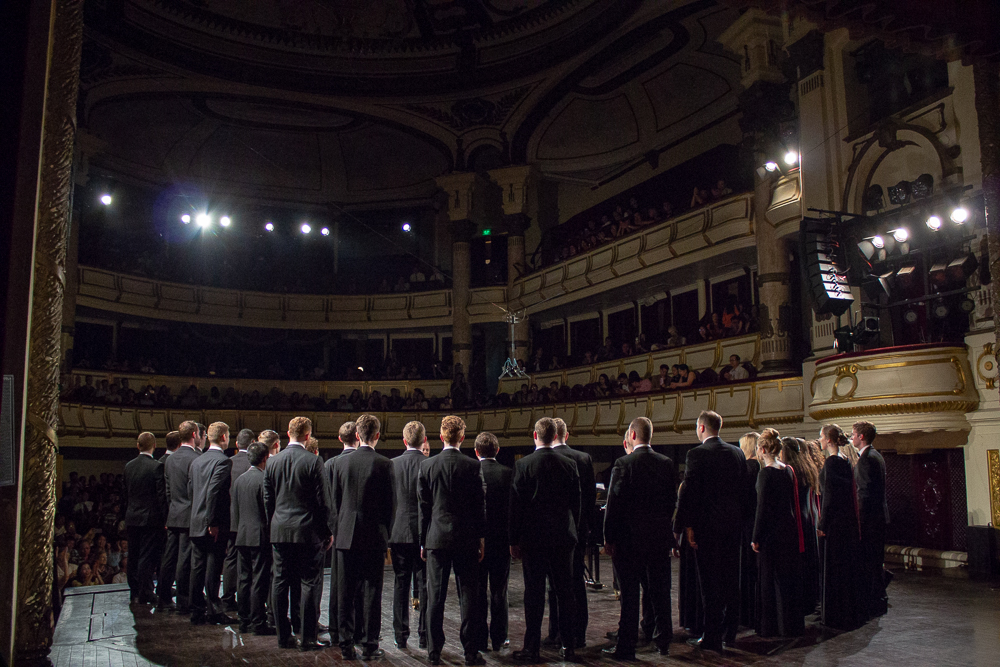 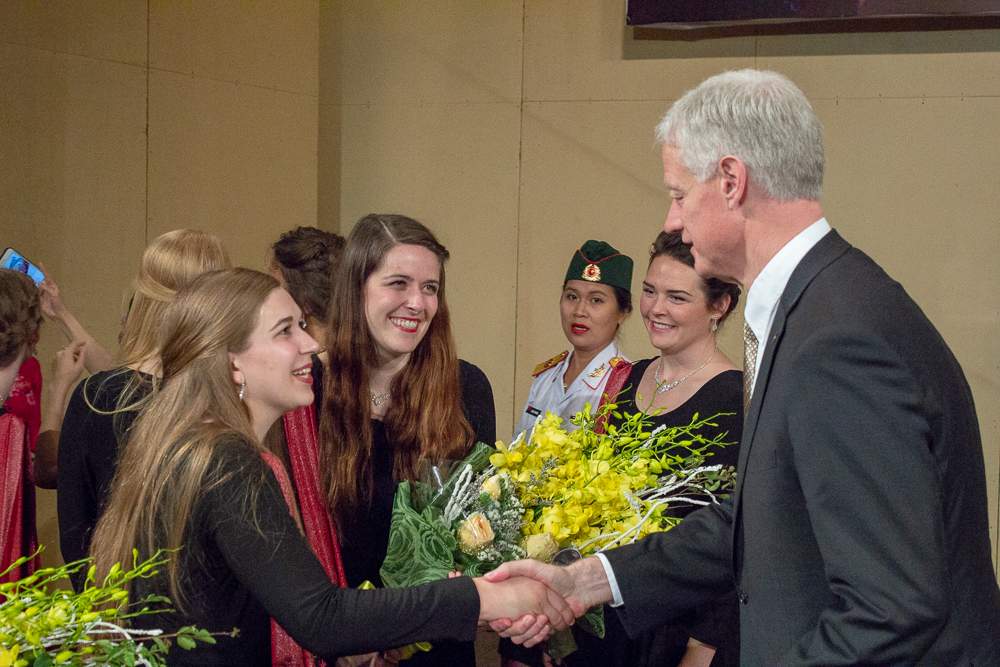