We had another beautiful Sunday today and had a lot of opportunities to make lasting friendships. Fortunately, we had some time this morning to relax and catch up on some missed sleep from the previous days of our tour. We had lunch prepared for us by a local restaurant before heading to a small LDS branch here in Hanoi. The branch runs out of a building space that is several stories high. The room in which everyone met was quite small compared to a typical chapel, but the members were so gracious and welcoming as we entered the building. 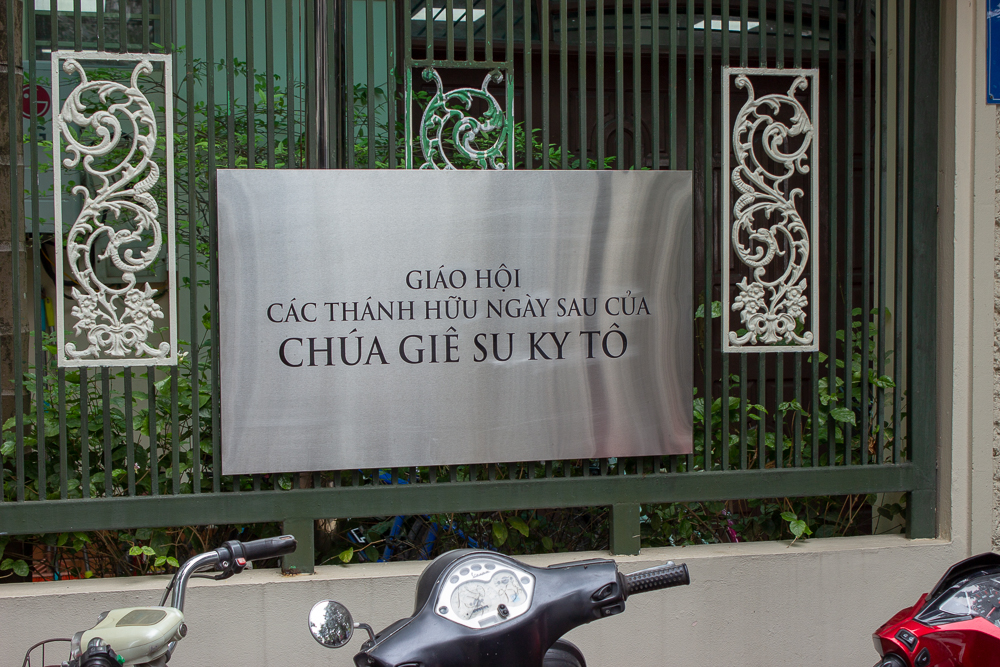 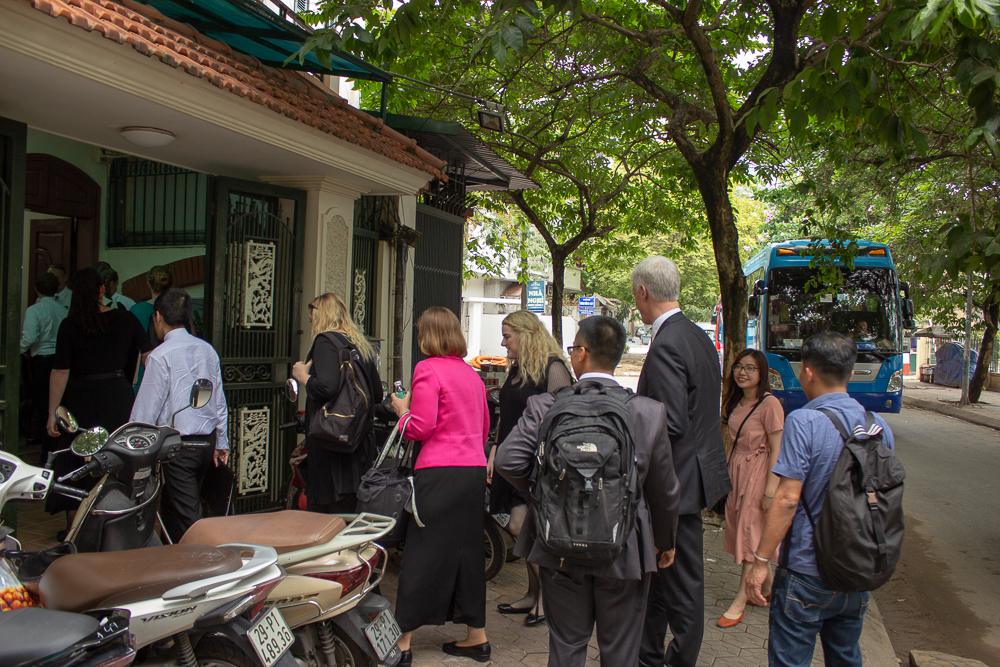 We had a beautiful service which was translated by one of the full-time missionaries serving in the branch. Two members of BYU Singers gave short talks during sacrament meeting, and one of the members of the branch presidency filled the other slot for the closing remarks. We then had a combined Sunday school class to finish off a short two-hour block of church for the day.

Following the meeting, BYU Singers sat and rehearsed a few pieces that they would perform later for a devotional. The chapel in Hanoi is very small compared to other spaces in which the choir typically performs, but the sound was just as piercing and moving. Staging was an interesting challenge, but in the end they were able to fit everyone they needed in the small space provided. 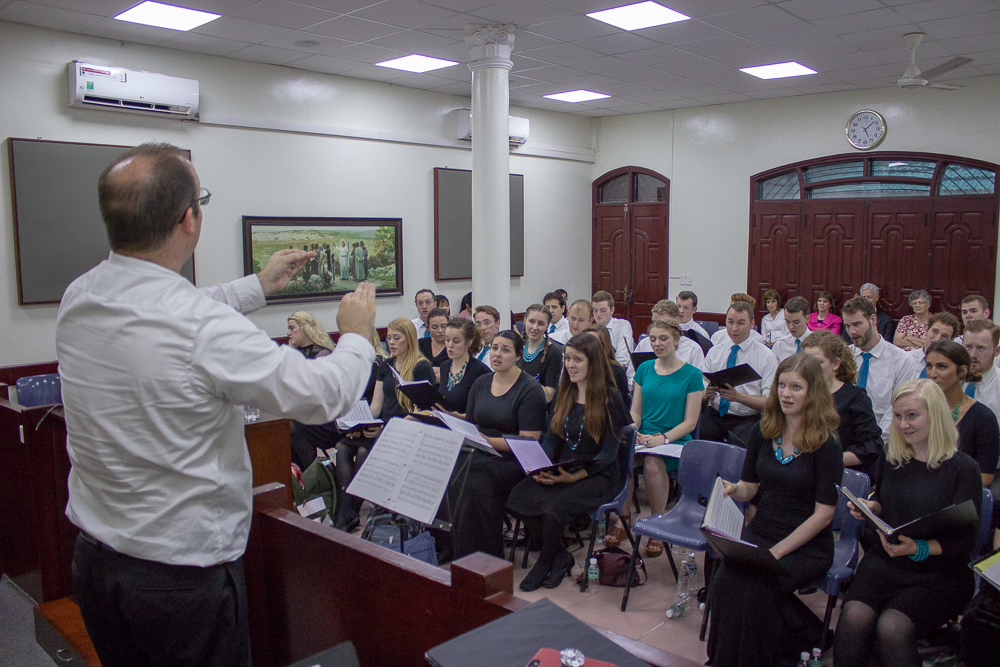 A rehearsal together before the devotional 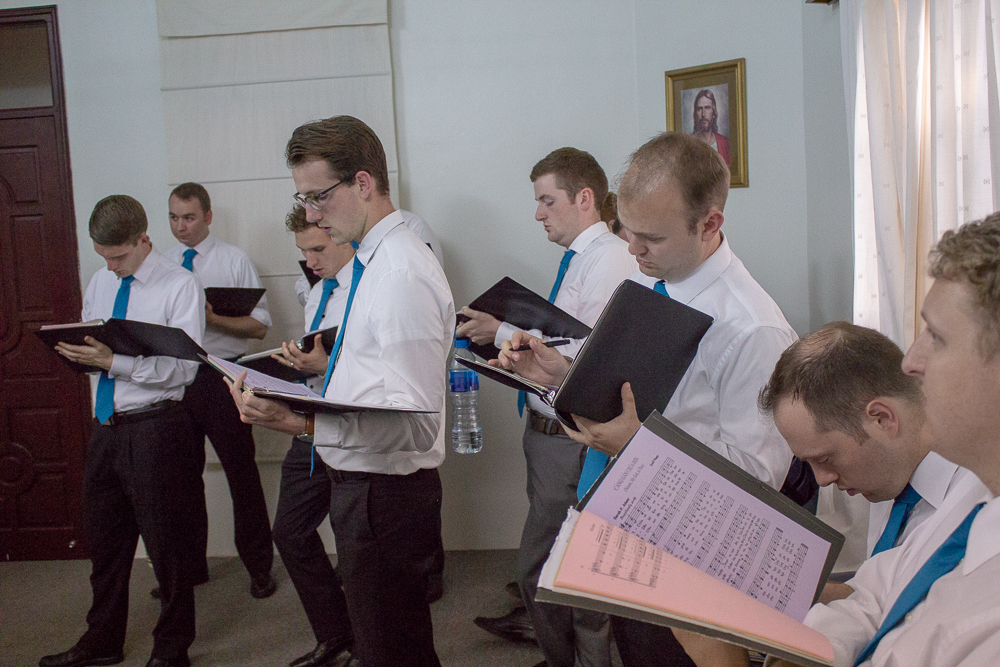 After about an hour and a half of rehearsal, an audience that ended up being around 50 people began to file into the chapel. An anxious excitement filled the room while everyone waited for the devotional to begin. In attendance were many LDS church members within Hanoi, President Hassell of the Vietnam Hanoi Mission, President Worthen and his wife, Vice President Sandra Rogers, as well as many individuals who are currently learning more about the church. Through the beautiful program today which included several LDS hymns in English and one in Vietnamese as well as the messages prepared by several of the choir members and President Worthen, all in attendance were able to strengthen their faith and look ahead with a greater devotion to Jesus Christ. 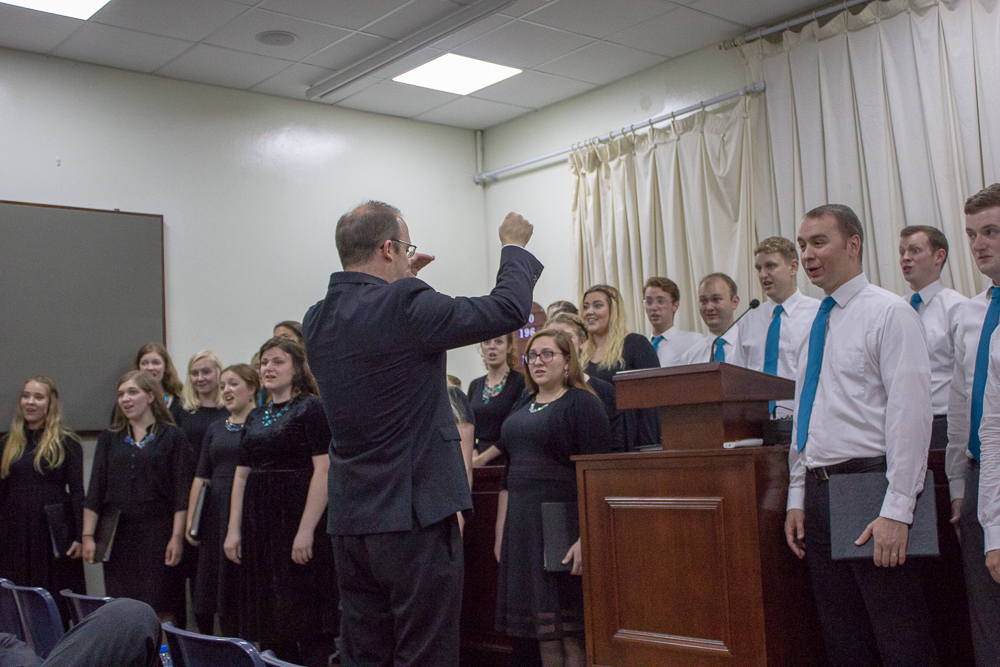 BYU Singers perform for the church in Hanoi 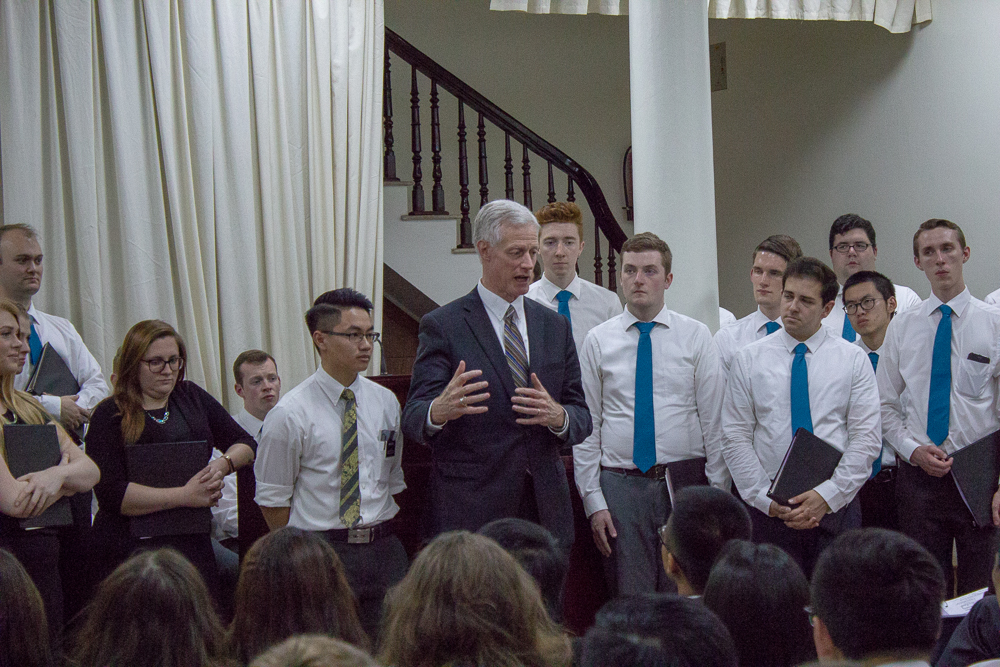 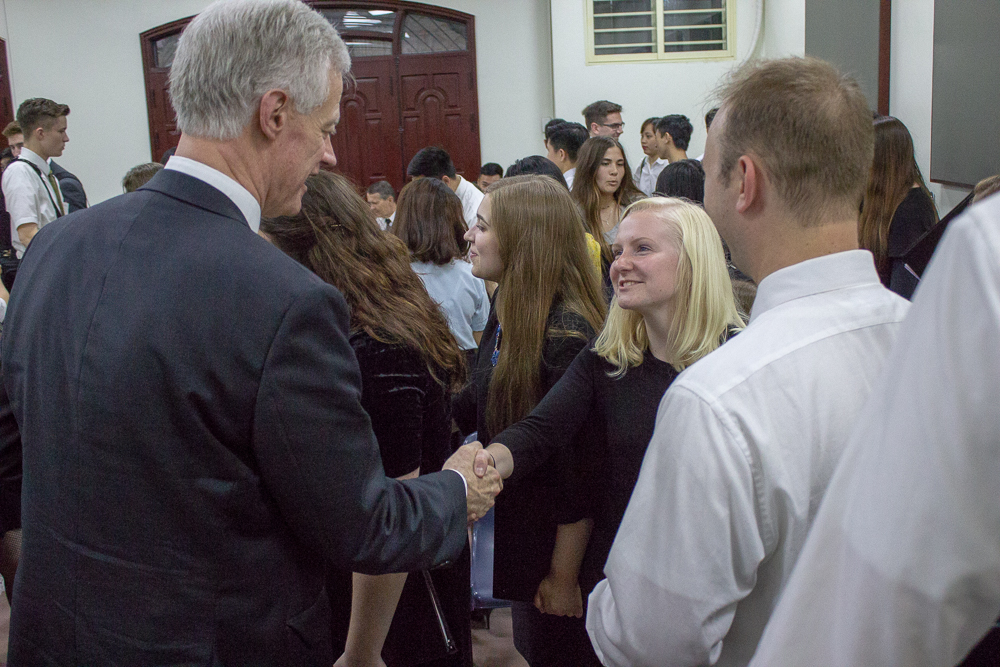 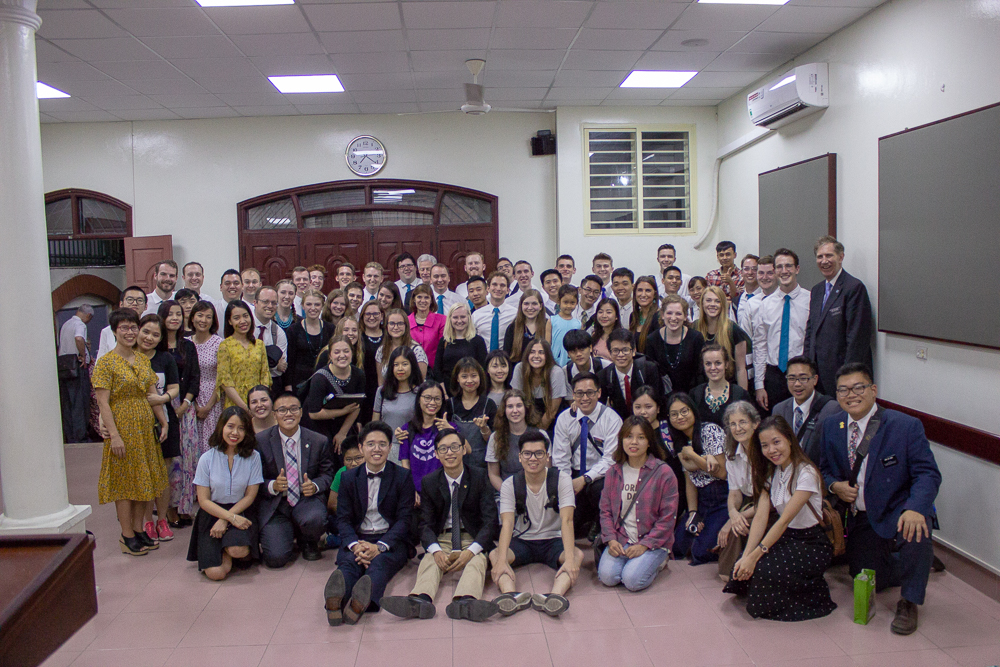 A group picture with those in attendance tonight

Following the devotional we were provided with dinner complete with several dishes. Perhaps one of the most interesting dishes we have received on this trip until now was included in this meal—jellyfish. Eating jellyfish was a new experience for many of us, and it caused many to wonder why they are called jellyfish when the texture was anything but jelly-like. Vietnam has definitely been an interesting experience so far solely judging by the meals! We are very excited for another day of performance tomorrow when BYU Singers will be singing once again with the Military University of Culture and Arts Choir. 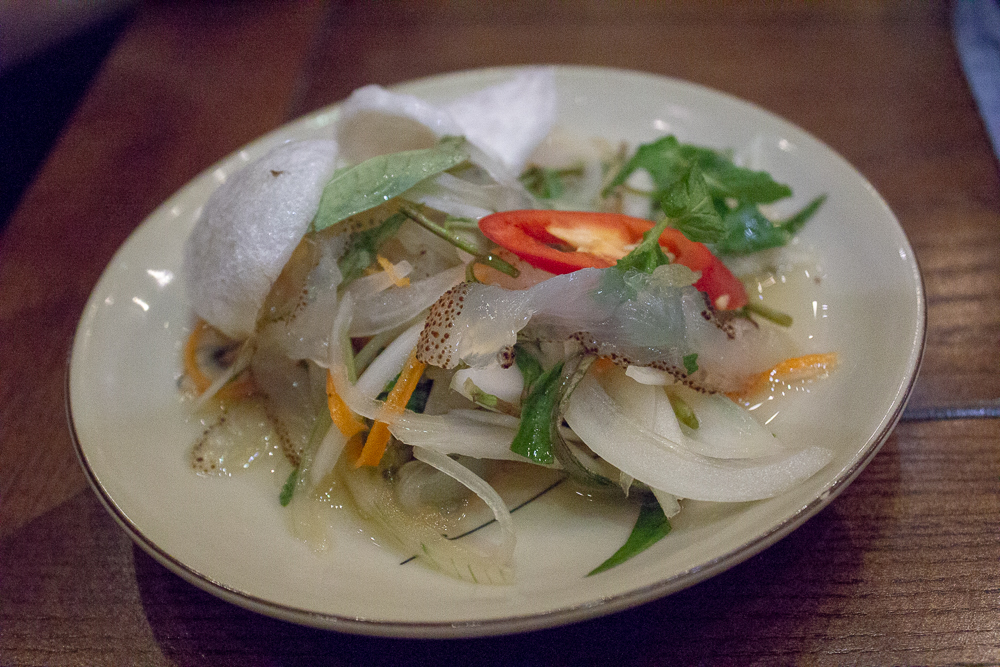