We began with a slow start today. The crazy tour schedule has left a few members of the choir with mild illnesses, so Dr. Crane and our tour manager Rex Barrington were able to rearrange our schedule to give us a long morning to relax and sleep in. We all felt very rejuvenated when we gathered together this morning; it was definitely a necessary break for us all!

Once we met together, we walked about five minutes away from our hotel to eat lunch at a local restaurant. By now, the choir has been separated into two rooms when we eat—those who want seafood and those who do not. Shrimp that looks back at us and crunchy jellyfish has been a little too much for some to handle. Today’s meal was pretty standard compared to what we’ve had so far in Hanoi; soup, chicken, fish, shrimp, and vegetables. 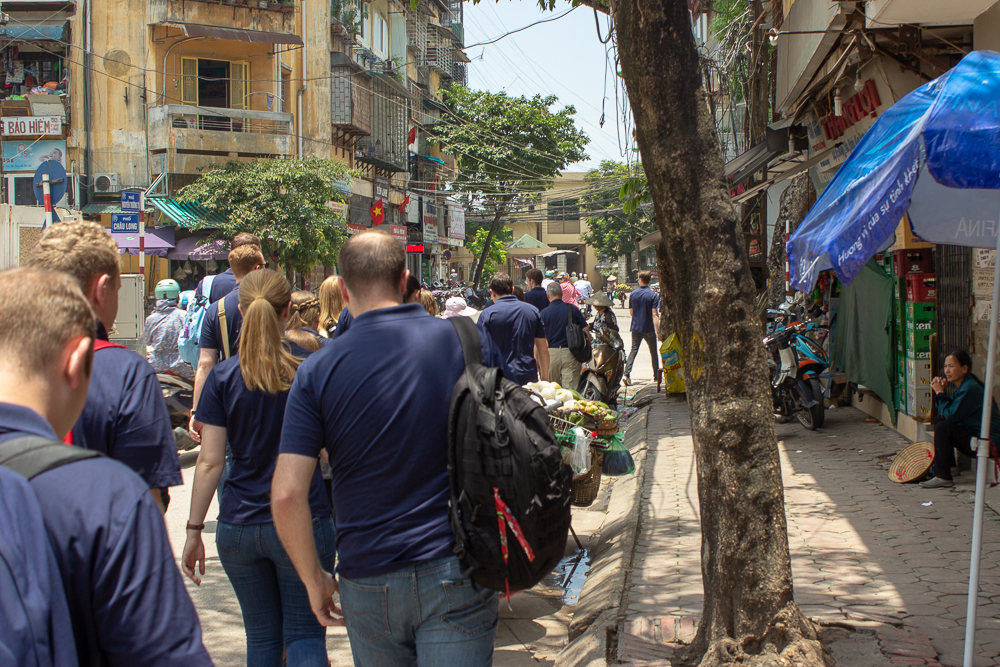 Walking to lunch after a restful morning

After lunch we immediately went to our performance location for today, the Military University of Culture and Arts (MUCA). BYU Singers performed with this same choir on Saturday night in the Hanoi Opera House, but this afternoon they met together at their university to have a clinic before an evening performance. After Dr. Crane taught about several basic aspects of choral singing, together both the MUCA Choir and BYU Singers learned a new piece, a beautiful arrangement of Ave Maria which they performed together at the concert tonight. They also rehearsed When the Trumpet Sounds, but the MUCA Choir provided a bassist and a drummer to play along with the piece. 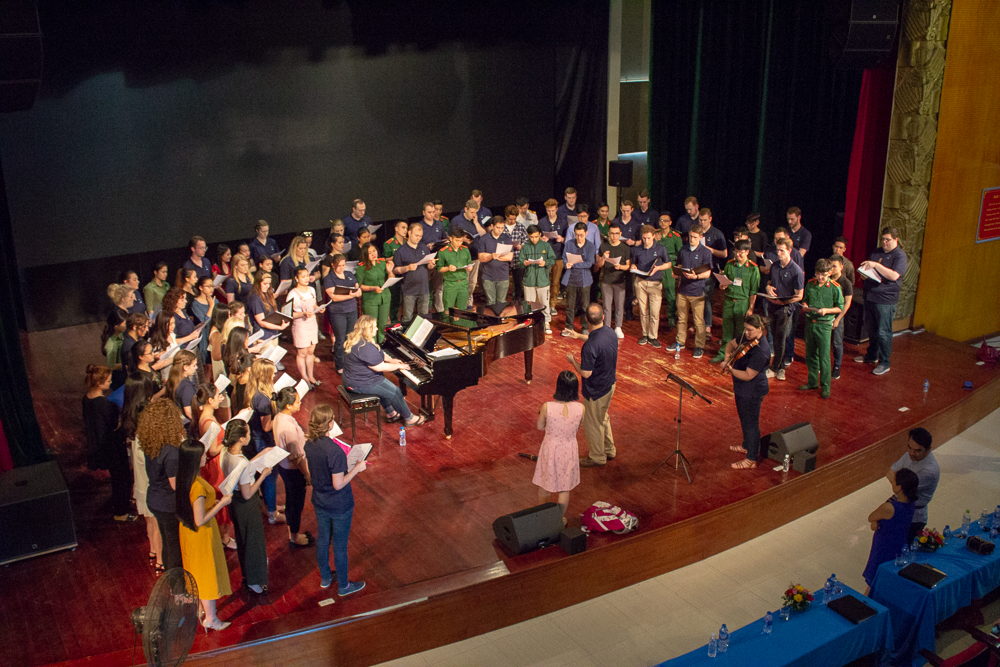 Combined rehearsal with the MUCA Choir

After the clinic, BYU Singers had a little bit of time to rehearse their repertoire alone. They polished Ly Ngua, a Vietnamese piece that the choir hasn’t yet performed on this tour. As usual, BYU Singers also worked on staging for their pieces in which the choir has more movement, such as Turkey in the Straw. We then were served a large dinner by the university before the evening performance. 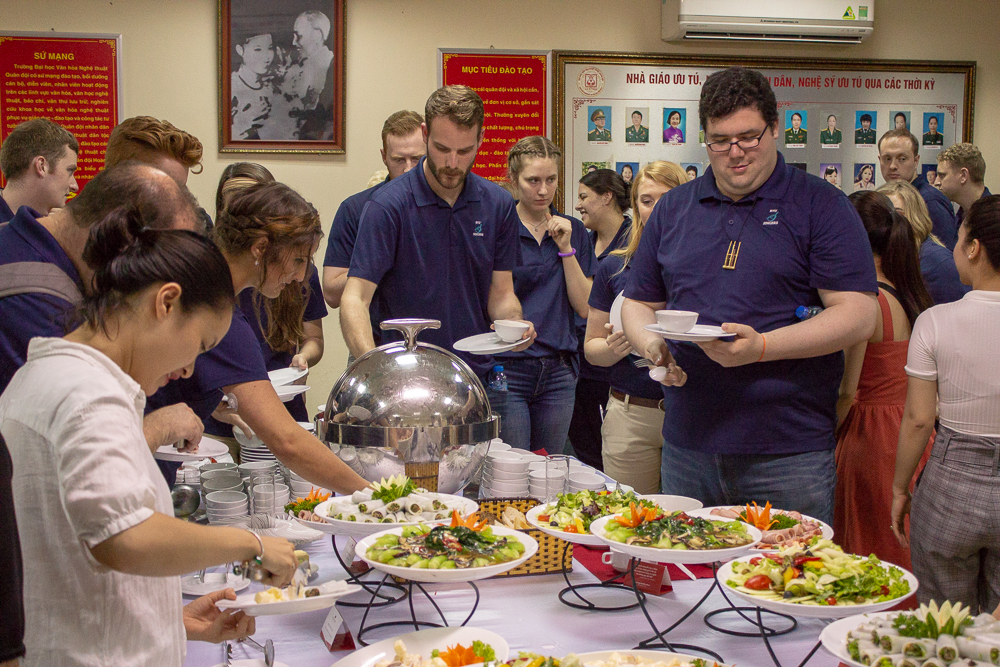 A wonderful dinner served by the university

MUCA began the concert by presenting a gift to President Worthen, a painting that is very important to the Vietnamese culture. Afterwards, from the first moment BYU Singers walked on stage tonight the crowd began cheering and screaming. It’s unusual to receive that enthusiastic of a response by simply walking on stage, but we all knew from that moment that this crowd was going to react very well to the performance. The first half ended with Avsenik Medley, which the crowd thoroughly enjoyed. They couldn’t help but chuckle as the choir sang nonsense words and danced along to the catchy tune. Then near the end of the second half, the choir sang two Vietnamese pieces—Ly Ngua, which they rehearsed earlier, and Nguoi O Dung Ve. As soon as the audience heard the familiar words of these popular folk songs, they couldn’t help but clap and cheer. After the performance, many members of the choir were swarmed for photo opportunities. We said goodbye to President Worthen, Sister Worthen, and Vice President Rogers who will be departing from Vietnam tomorrow morning. It has been an incredible experience having them here with us throughout the past few days, and we very much appreciate the feelings of love and support they have shared with us. 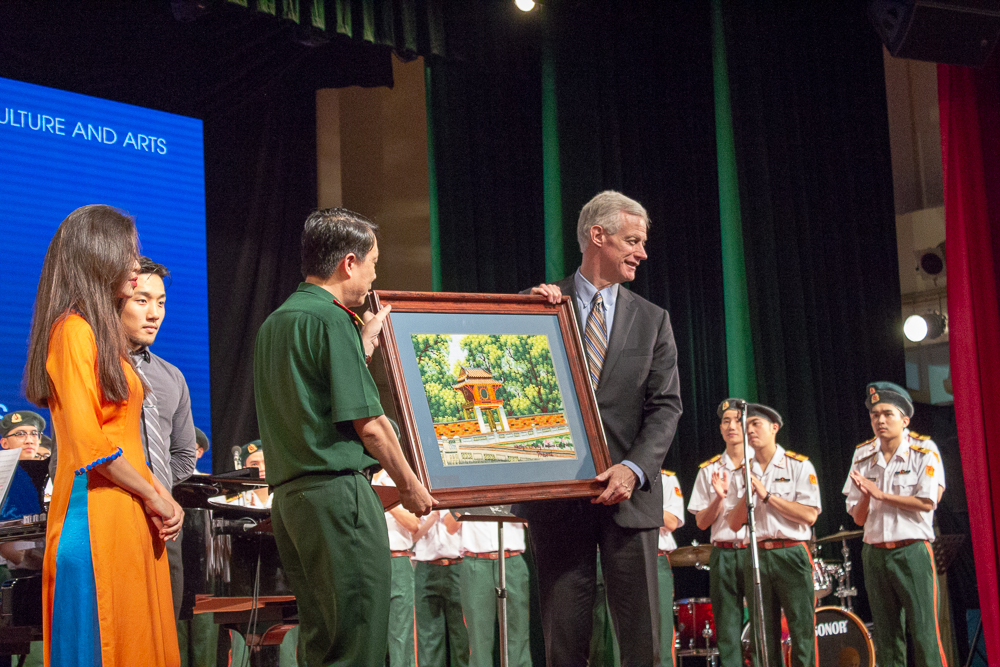 Presenting President Worthen with a gift before the performance 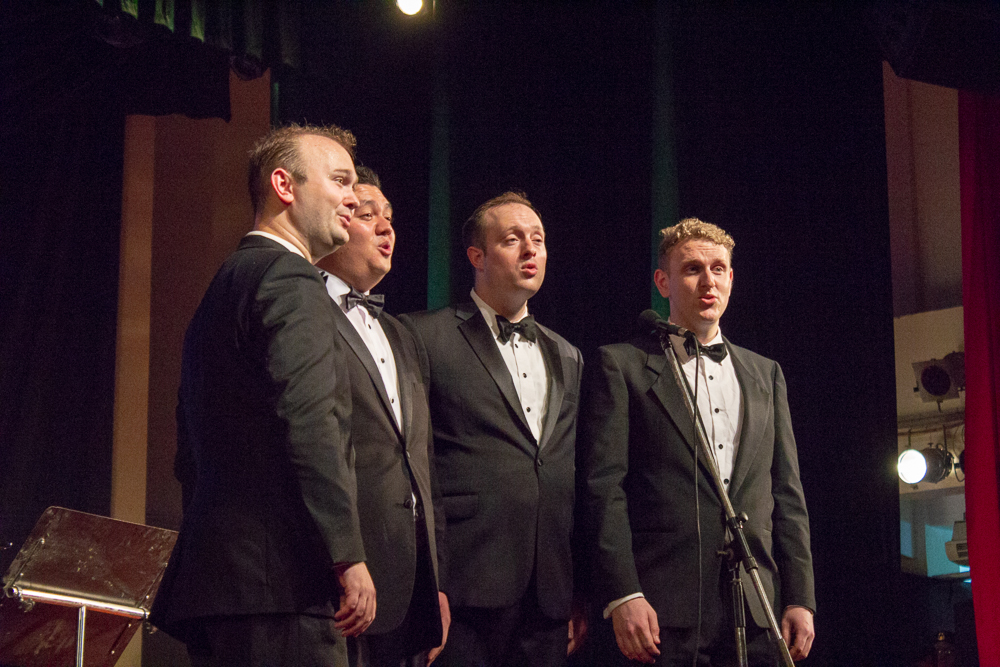 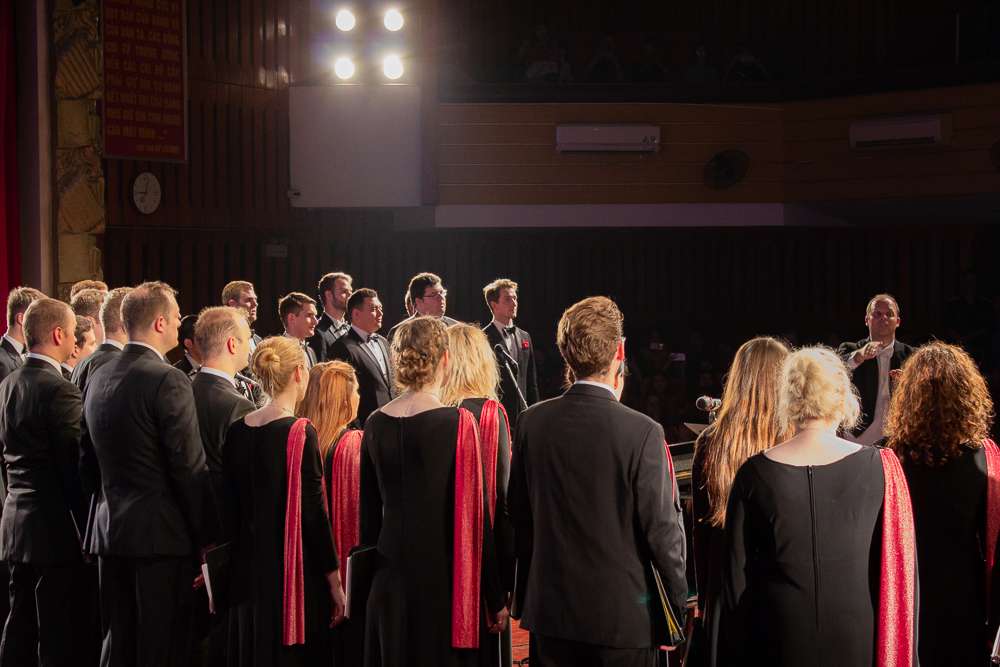 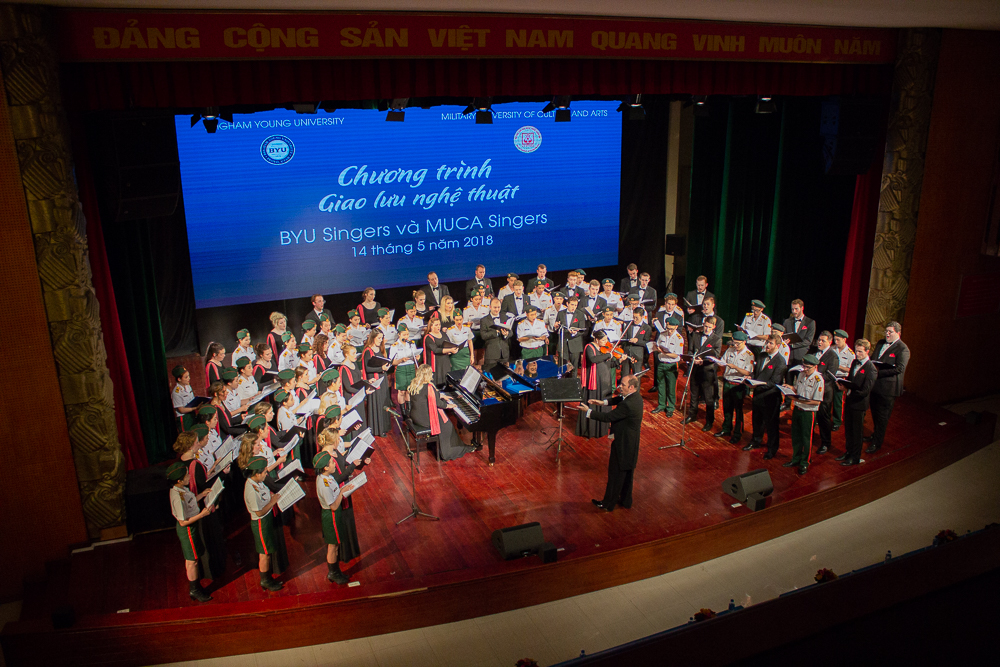 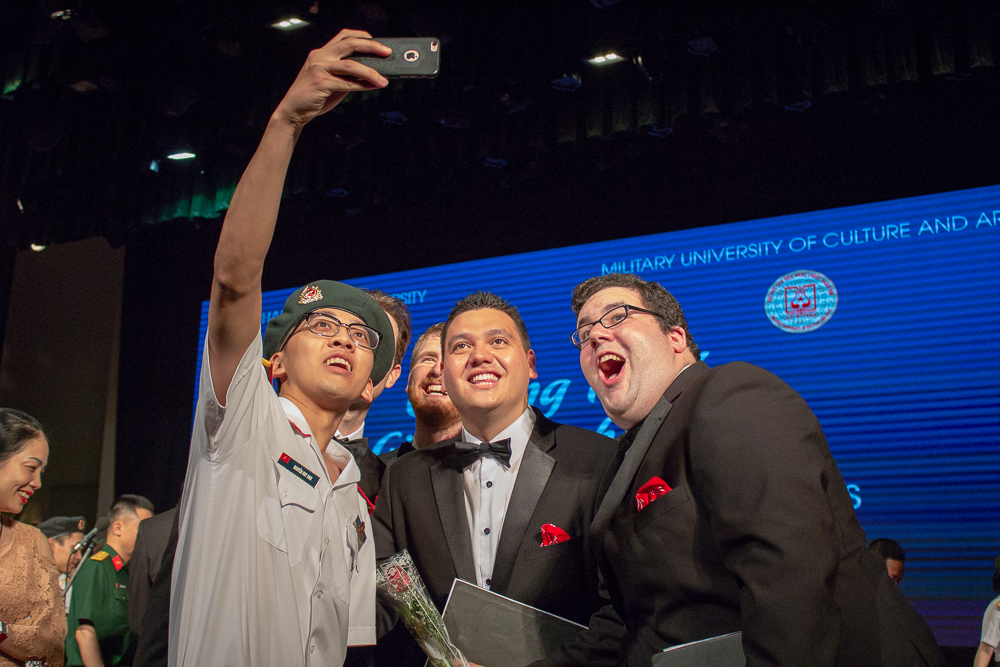 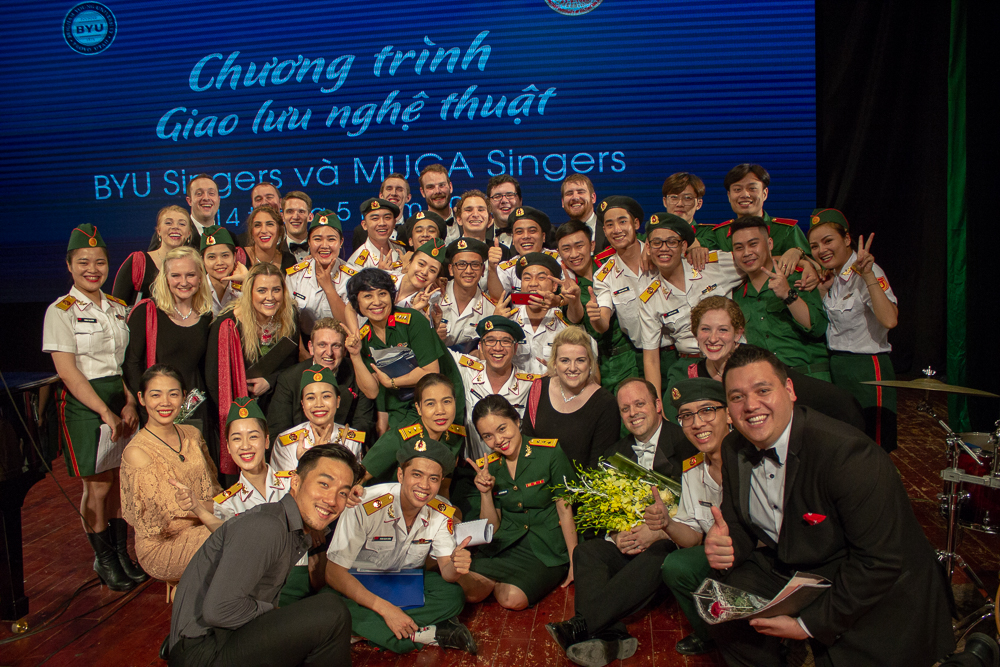 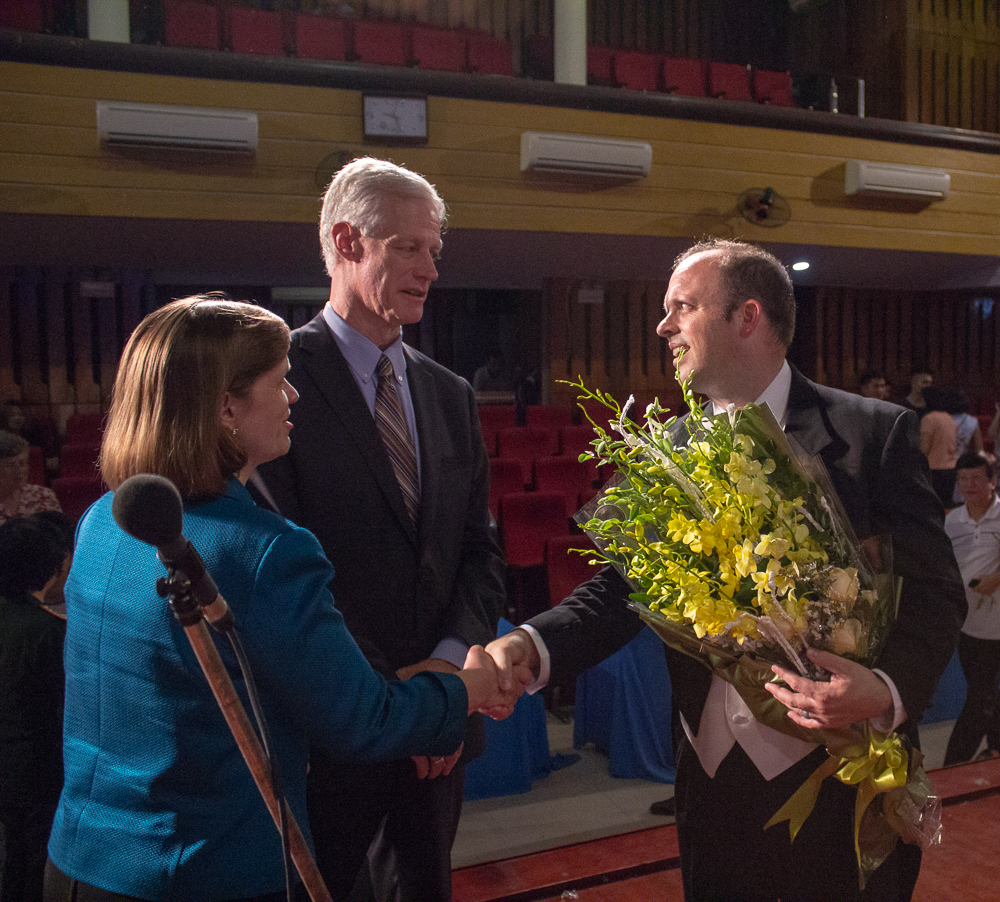 A parting moment with President and Sister Worthen