And we are back in Washington once again, after saying a fond farewell to our new friends in Salem. What a wonderful day and concert we had with them! The bus beckoned to us, though not very alluringly at this point. We had the luggage loaded in short order, and the choir boarded with their year’s supply of food that their generous host families sent along for lunch. We are being well taken care of, no question.

Four hours later we arrived in Kirkland, Washington for a workshop with the Seattle Ensign Choir, directed by Rob Archibald. They were formed only last September, and are sounding very good. We were happy to see a few Singers alumni and other friends from days of yore at BYU singing with them. Rachelle (Harmon) Hrncirik and Shayne Holmes sing with them, and we were pleased to hear Rachelle sing her solo on “The Battle of Jericho” once again! As challenging as the pace can be on our stateside tours, we find such joy in reconnecting with so many old friends. Erin (Robison) Gee was there to visit; her husband sings in the Ensign choir. 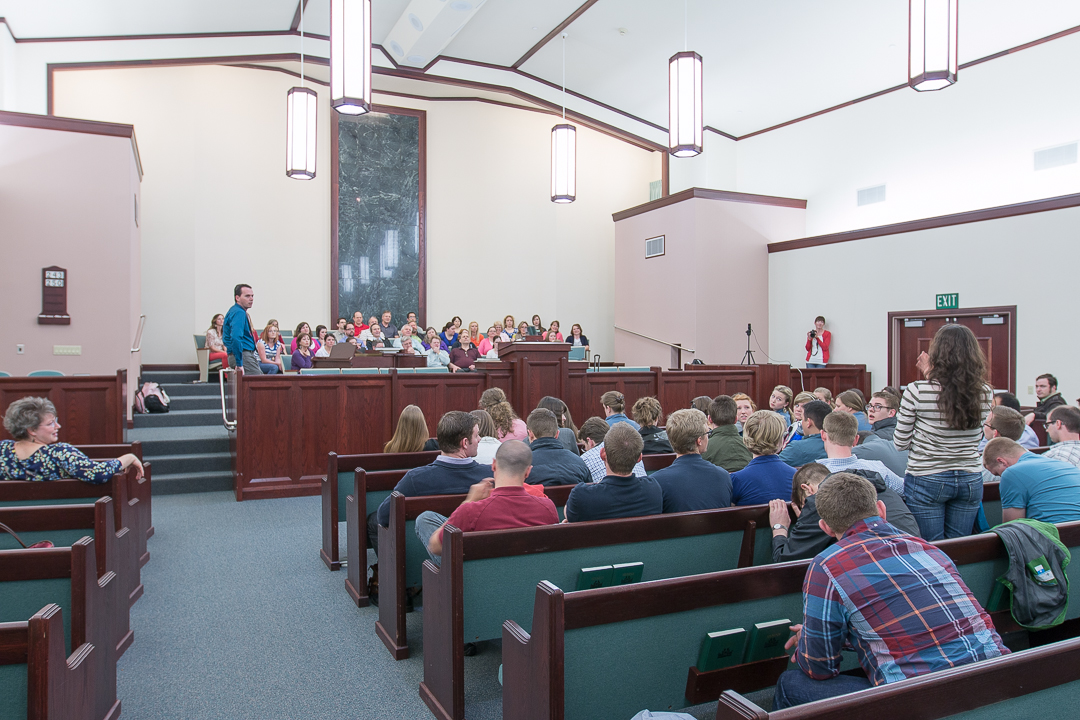 Seattle Ensign Choir in the choir seats; BYU Singers in the congregation pews. 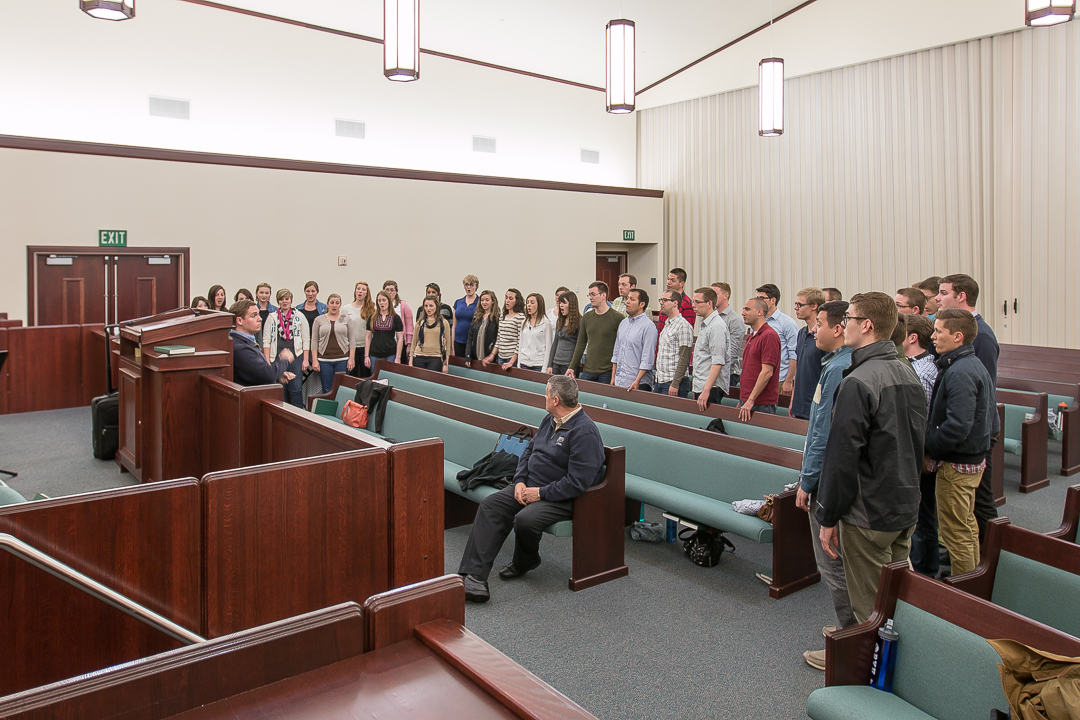 We sang to each other a bit, and Dr. Staheli and some of Singers offered some specific ideas and suggestions to the Ensign Choir that they responded to swiftly. Our time together was well-spent. It is reassuring to know that choral music is alive and thriving in the areas we visit. 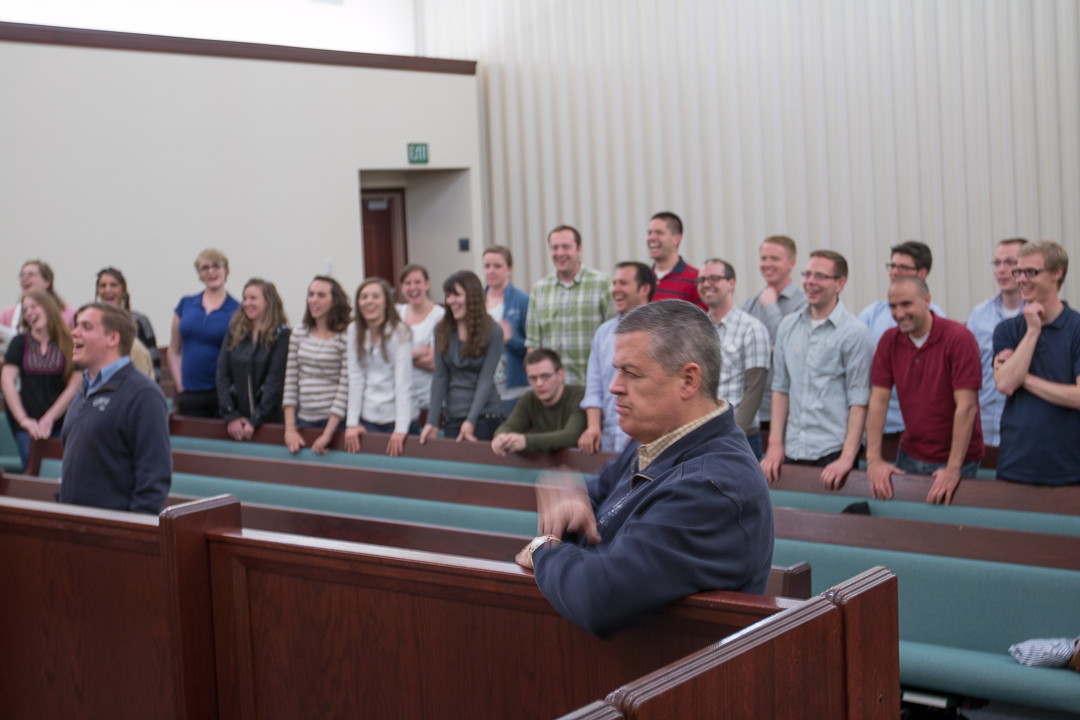 I’m not sure what was said–but it was obviously good! 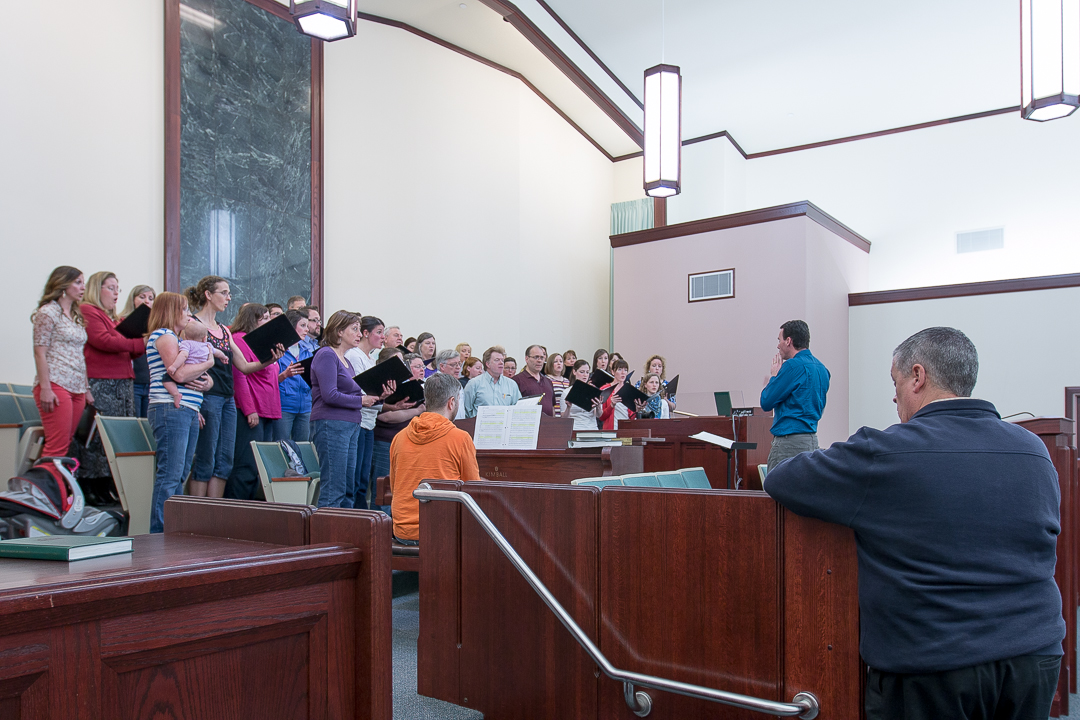 At the end of our clinic a family who had just been baptized into the LDS Church during our clinic, and their friends and missionaries came into the chapel where they were surrounded by the two choirs and serenaded with “Come, Follow Him” and “God Be with You.” It was wonderful to be part of their day for a few minutes.

A quick dinner (thank you, Seattle’s BYU Alumni group!) and a quicker change into concert attire followed so that we could wade back onto the bus to find the concert site. We performed at the Bastyr University Chapel, which is located in what formerly was St. Edward Seminary, a Catholic seminary building in the Inglewood-Finn Hill neighborhood of Kenmore. Its campus is almost completely surrounded by Saint Edward State Park’s dense fir and hemlock forest. The foliage is indeed impenetrable–our bus GPS gave up even trying to find a satellite through the heavy growth. 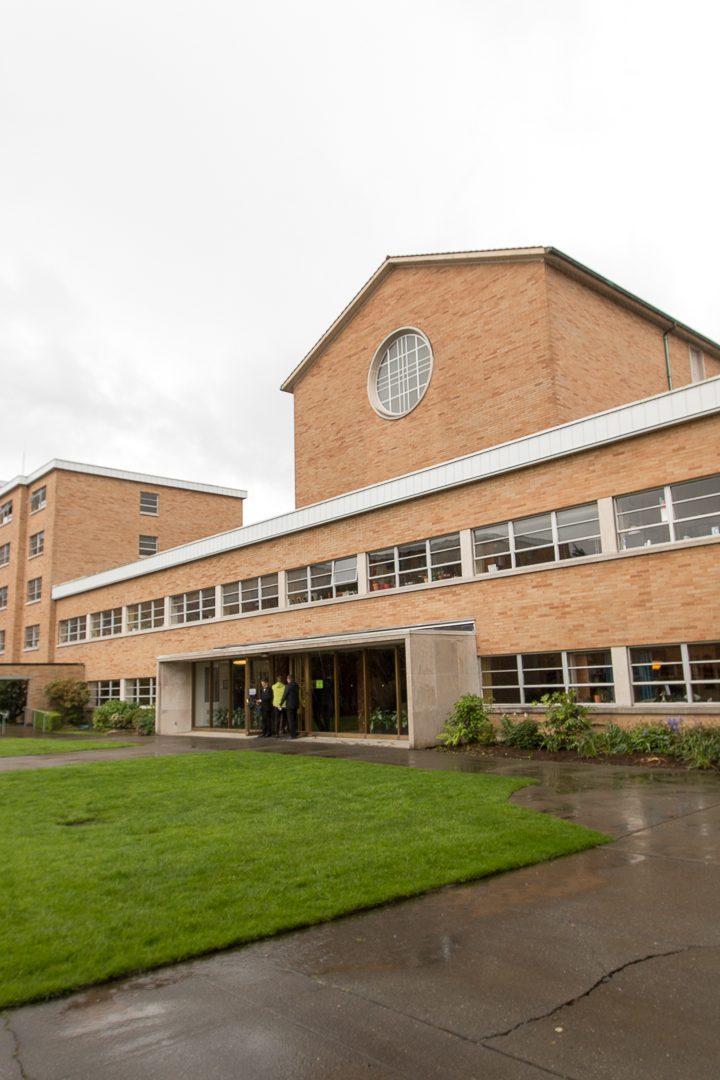 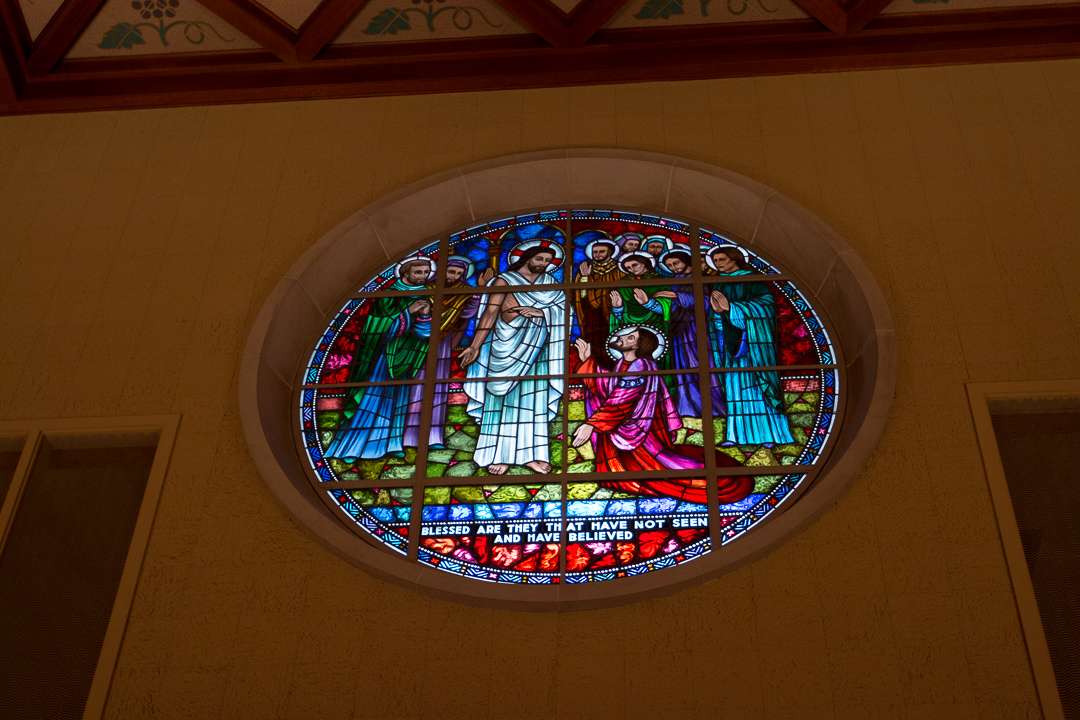 One of many beautiful windows in the chapel.

The chapel looks very much like a working Catholic chapel, but is one no longer; instead, it is used for weddings, concerts, and recording sessions as its acoustics are quite wonderful. It is beautiful to look at also; built in 1958, it has hand-carved oak paneling, marble columns, terrazzo floors and glass mosaic artwork along with lovely stained glass windows. The only thing lacking is lighting in the performance area; I guess everyone who performs there is completely memorized! Don’t let these photos fool you; I pushed the ISO to 1200 and did some magic in Lightroom or you wouldn’t even have seen the choir in these photos. 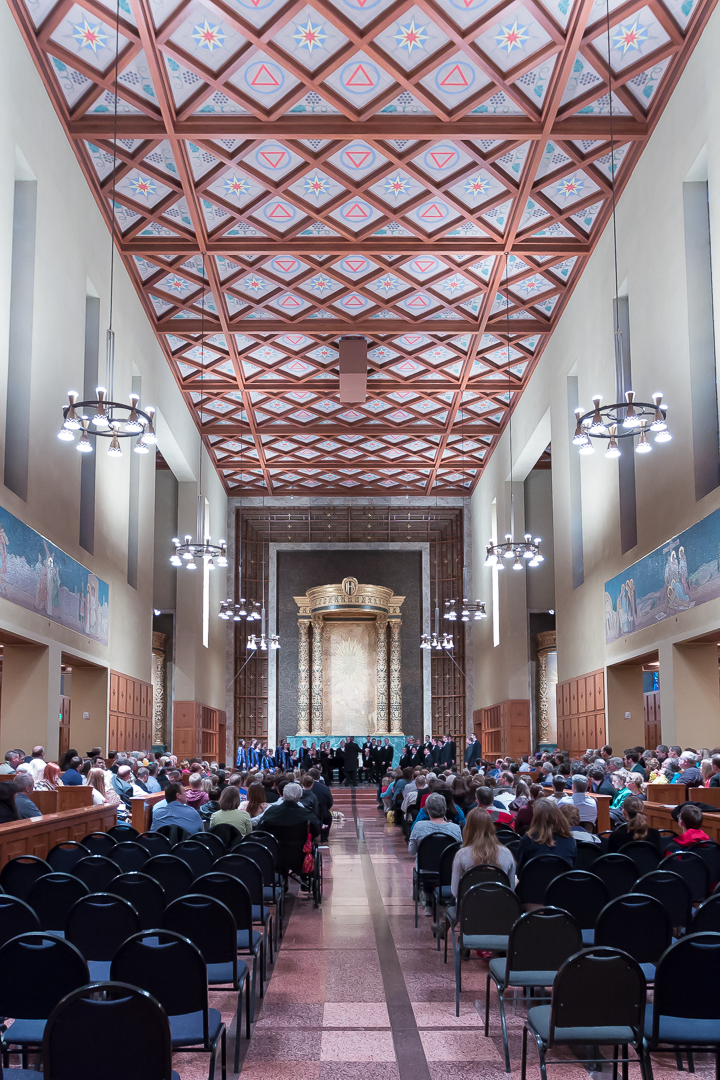 A view from the back of the chapel–note the ceiling decoration. 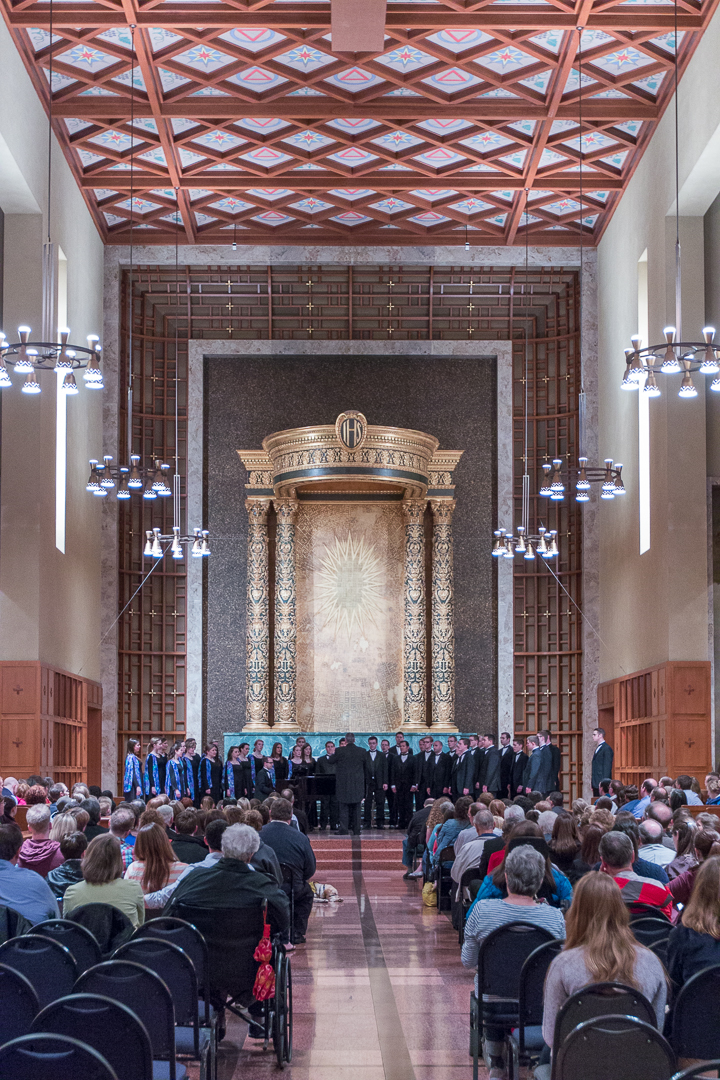 With such a venue, there was no question that Singers needed to perform their “Gloria set” and both settings of “O sacrum convivium.” They were gorgeous in that setting. But so were the “Music of Home” pieces and the songs of imagination. “She’ll Be Comin’ Round the Mountain” brought down the house, as always. With such varied literature and so much to choose from each night, the concerts never get old.

The only member of the audience who was lulled to sleep seems to have been this guide dog.

When we finally got hosts assigned and the remaining CDs etc. packed up, we emerged into a world Noah would have recognized. It had begun raining pretty convincingly as we arrived at the stake center in the afternoon, but it crescendoed into a deluge as the day progressed. Of course all of this moisture is why we are surrounded by such lush beauty here; but the rain also seems much, much wetter than it is in Utah. I’m suddenly remembering our tours to the UK! 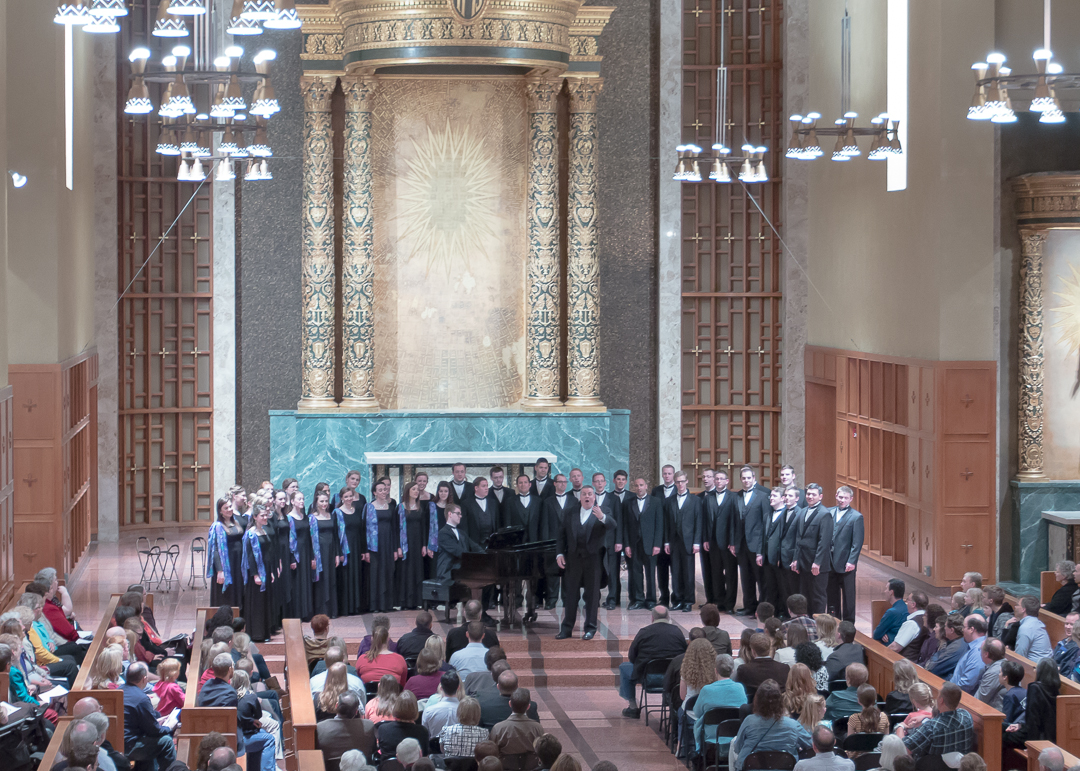 Audience participation: “Won’t You Sing Along?” 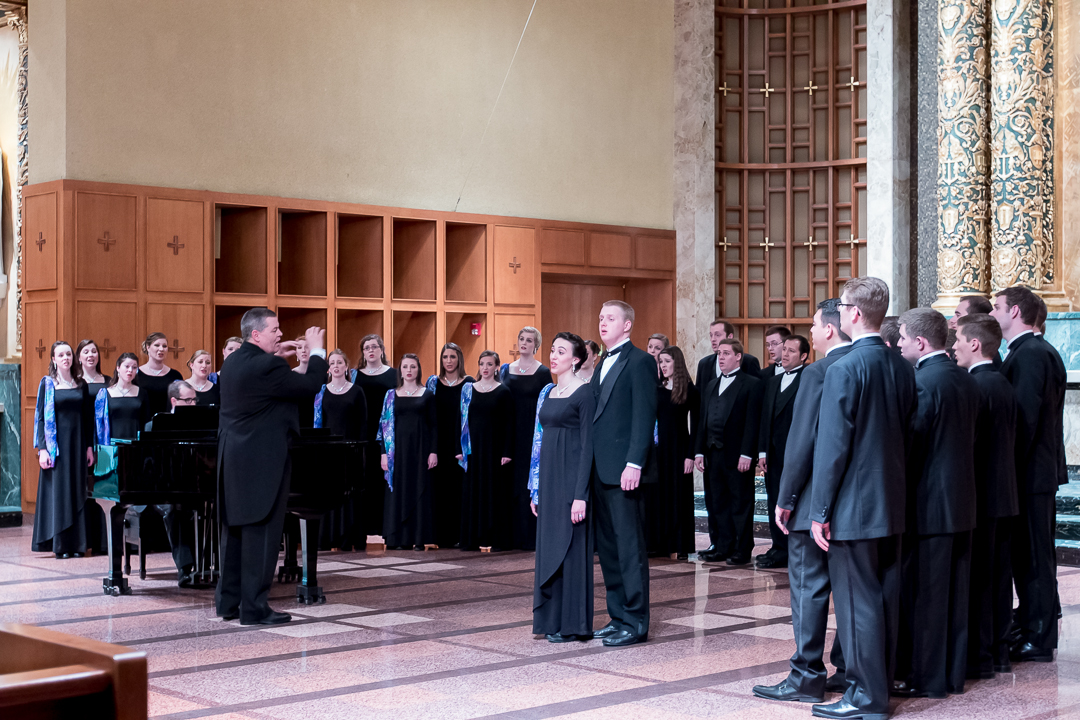 The Fonnesbecks singing “You Can Tell When There’s Love in a Home.” 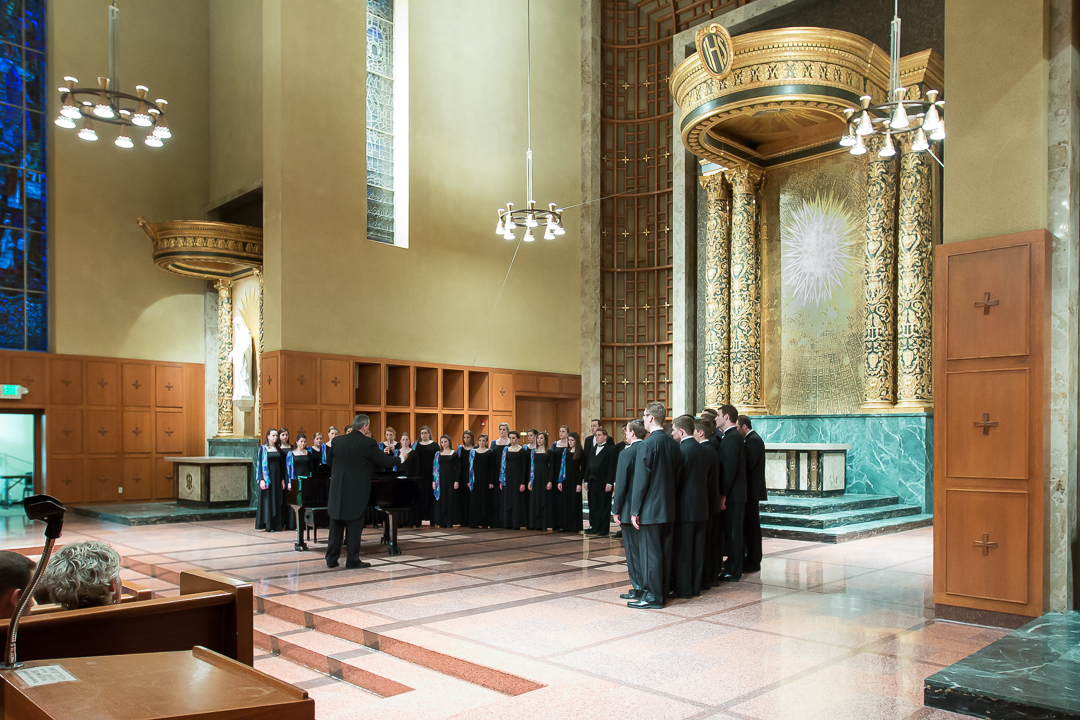 We saw more old friends at the concert, including Taylor Holsinger and Jan Staheli. Sister Staheli will be with us the remainder of tour, and the choir is very happy about that!

You may have noticed this was posted Sunday afternoon–last night was a late one. Tonight is a devotional (formerly known as a fireside) that I will report on tomorrow evening after that day’s events. Perhaps I can find a pair of Wellies to wear as we wander the area tomorrow…