Early this morning we gathered our belongings together to head off for our sixth flight of tour thus far. We flew out of the very small Yogyakarta airport to a very popular tourist destination—Bali. Bali is a smaller island next to Java, which is where we have spent all of our time on tour up until today. The island is a beautiful location where buildings are not permitted to be any taller than a coconut tree—a very questionable requirement for building height! Once we arrived in Bali, we met our tour guides for our two days on this island, Frits and Windy. 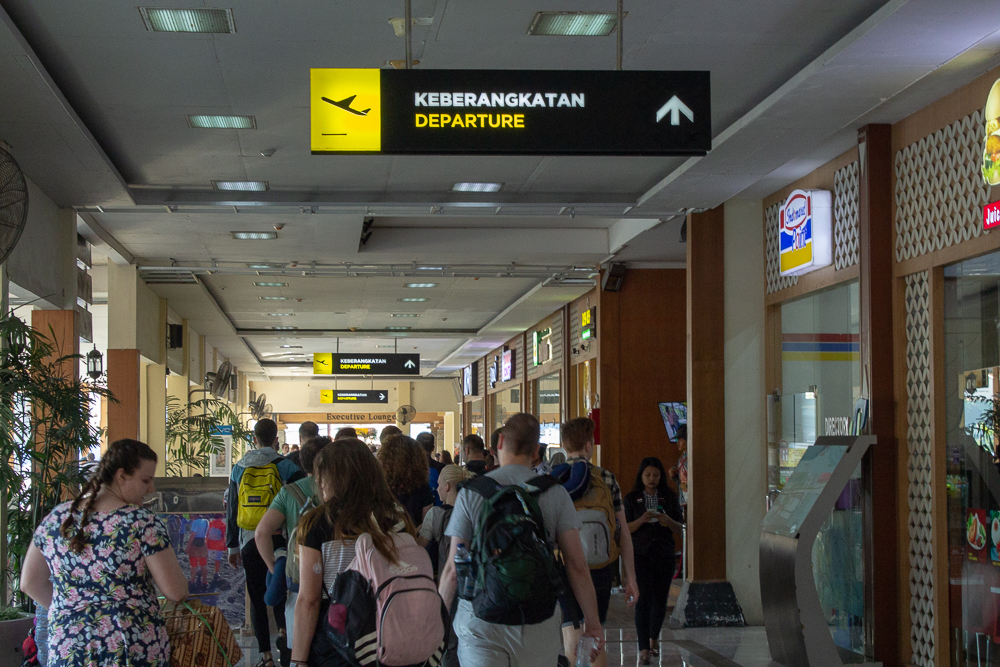 Arrival at the Yogyakarta airport, heading to Bali 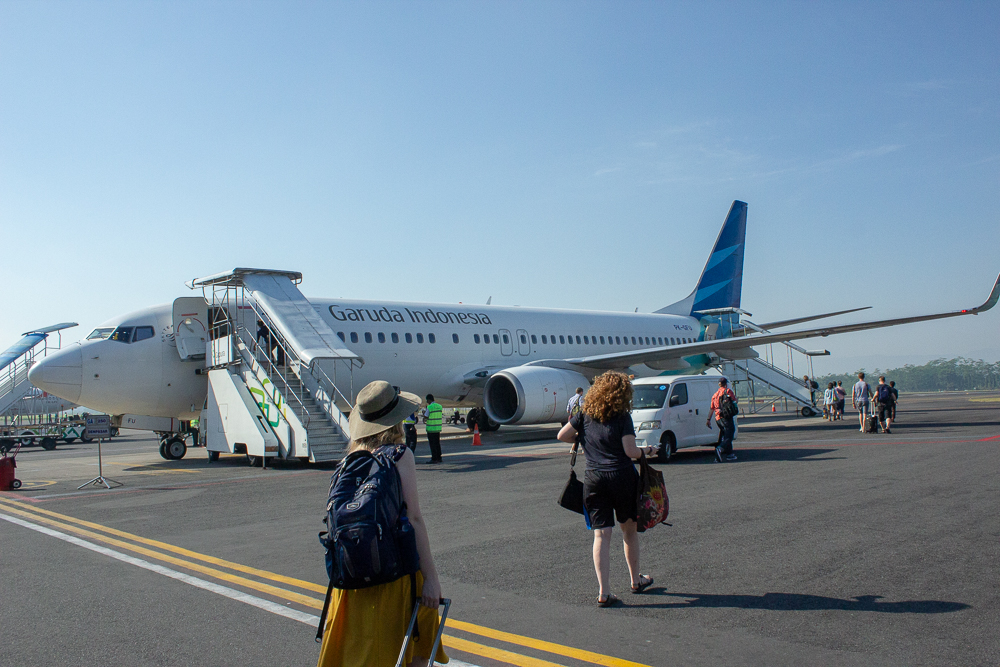 Boarding the plane to Bali 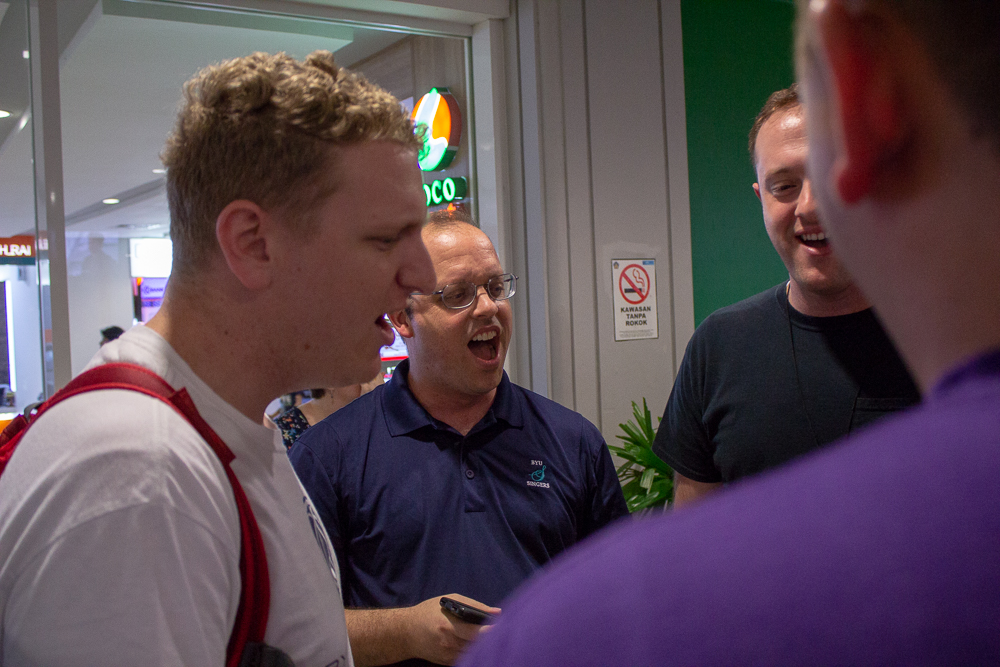 Killing time while waiting for bags by singing barbershop with Dr. Crane

Once we boarded the buses, we immediately went to lunch at a local restaurant near the airport. The staff served us plate after plate of delicious food including fried rice, chicken, shrimp, noodles, and mixed vegetables. Once our meal was finished, we went over to our hotel which was only a five-minute drive from the restaurant. 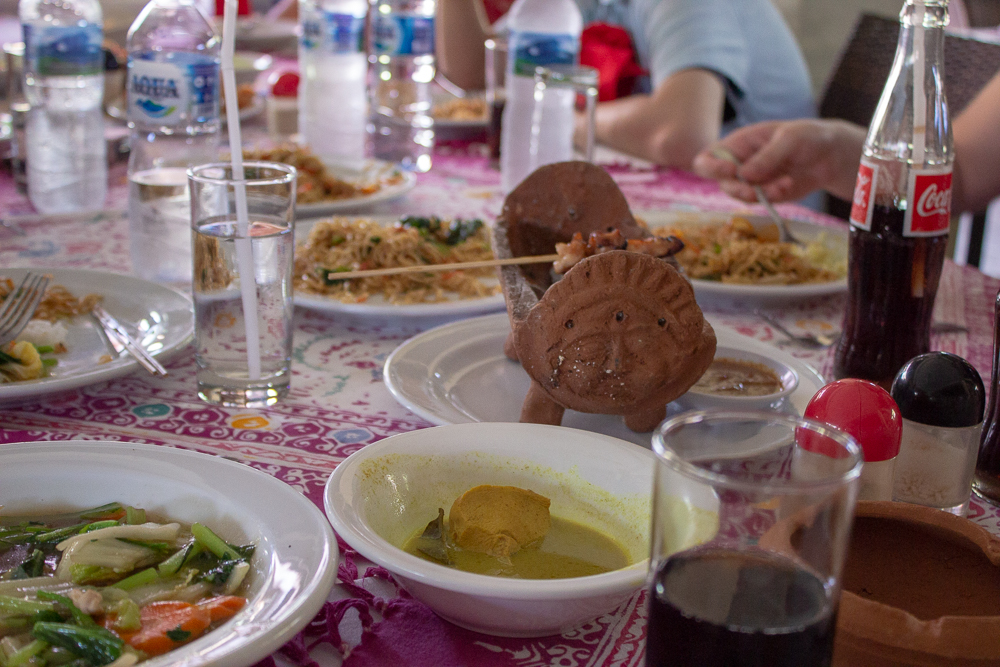 As we drove up to our hotel to check in, many jaws dropped. The hotel is absolutely gorgeous! It boasts a central pool surrounded by greenery of all sorts. The rooms are pristine and each has a patio overlooking this central pool. It truly feels like a resort. Hotels are so common here in Bali, however, that the rates for these hotels is very inexpensive compared to rates for similar hotels in the United States. Here we were able to take about an hour for much needed relaxation. The experience being here in Southeast Asia has been incredibly gratifying, but the constant traveling and exploration definitely takes a toll on the body! 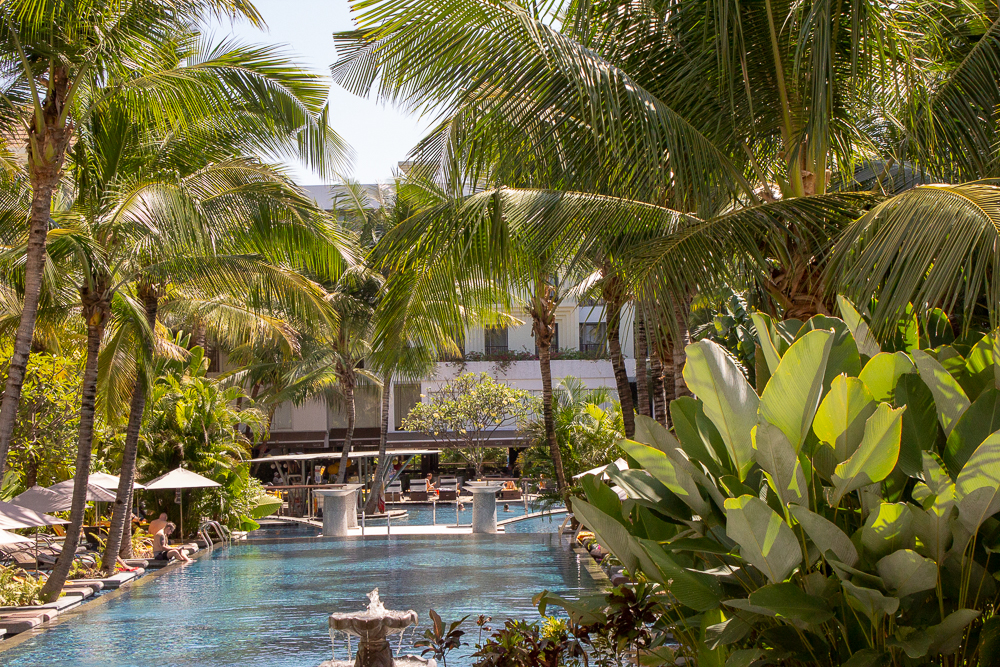 The scenery when entering our hotel

After our hour of relaxation, we then drove to the St. Francis Xaverius Catholic Church where the choir would perform later that night. Three other choirs, the Seraphim’s Children Choir, the Hallelujah Choir, and the Gamaliel Sonora Choir were also to perform with BYU Singers so this was the time to polish their combined piece for the night, How Great Thou Art. After a rehearsal and some dinner, the choir was ready for yet another stunning performance in a beautiful venue. 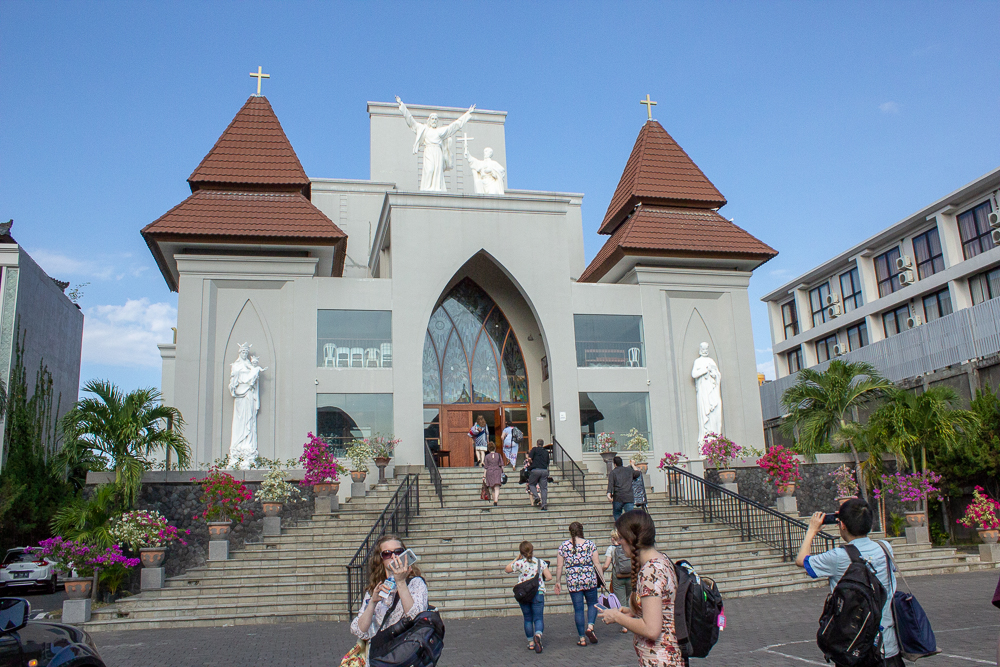 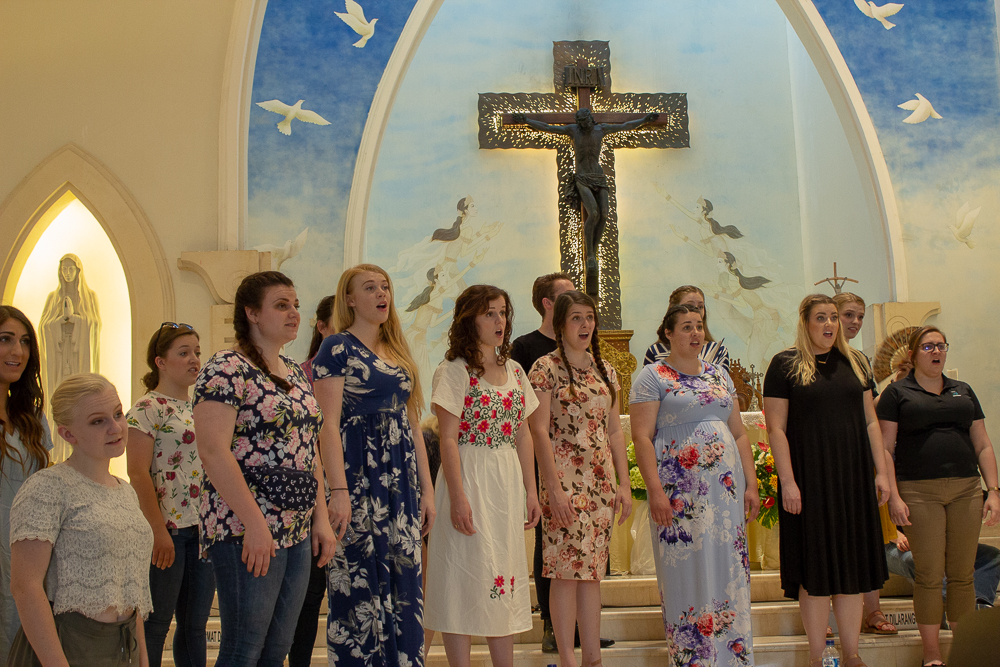 Rehearsal before the concert 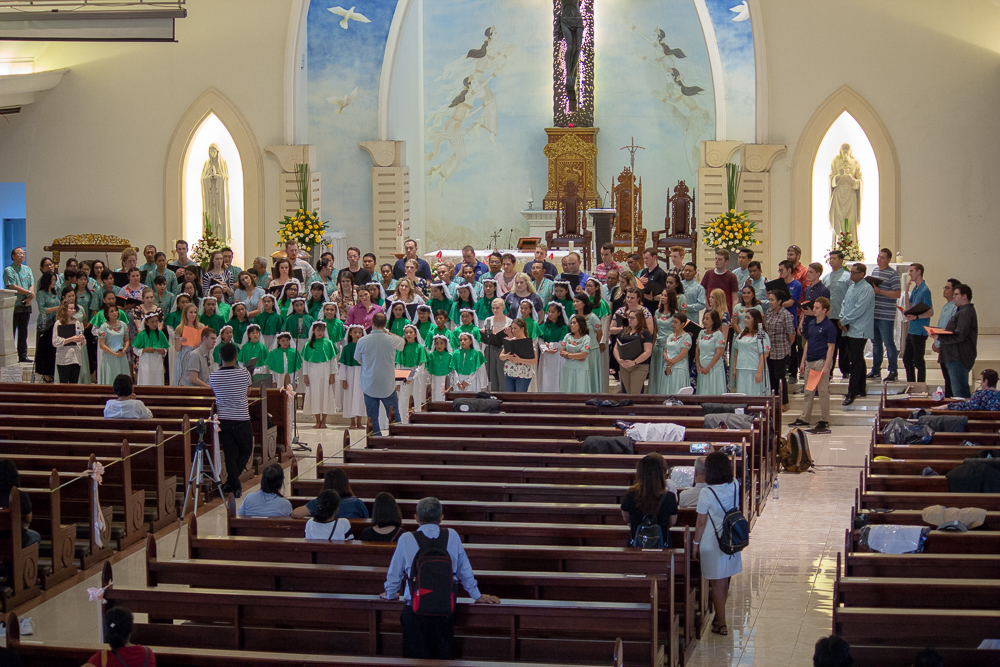 The church seats more than 800 people and when BYU Singers began their performance, almost every seat was filled with a body. The crowd was incredibly responsive to each and every piece. At the end of the first half of the concert, the choir performed Luk Luk Lumbu which was then followed by a standing ovation and wild cheering from a very enthusiastic audience. After the first half of the performance, the audience was hooked. They all stood and cheered for the choir as they walked back on stage to finish their performance. After the last piece, Hela Rotane, the crowd began cheering the now familiar words, “We want more! We want more!” To which the choir responded with a performance of Rayuan Pulau Kelapa. Another standing ovation followed the choir’s performance of this piece. To finish an incredible night for both BYU Singers and the audience, the other three choirs in attendance joined BYU Singers for a performance of How Great Thou Art. BYU Singers also received shawls as a gift from the other choirs for coming and sharing their musical talents. It’s truly amazing to see the immense impact that fine-tuned choral music has had on the people of Indonesia. 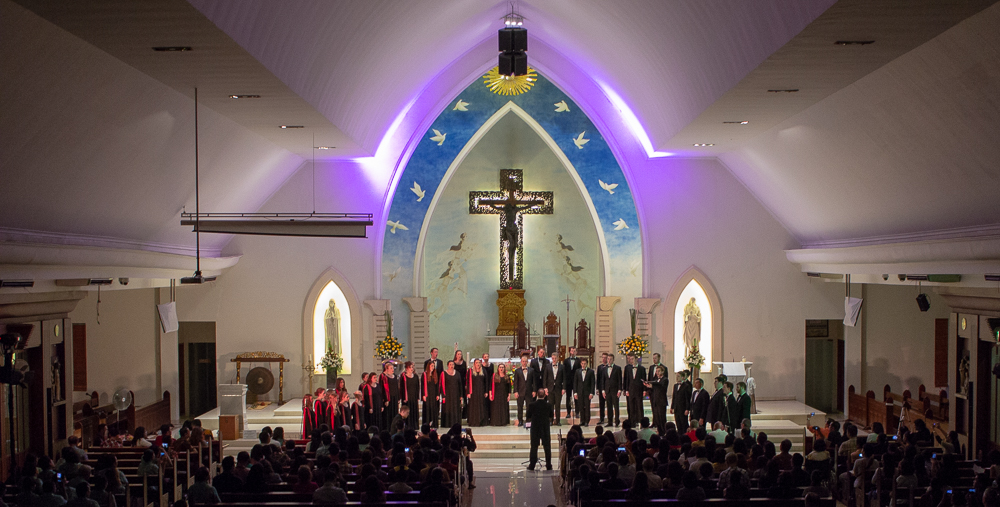 The beautiful architecture of the St. Francis Xaverius Church 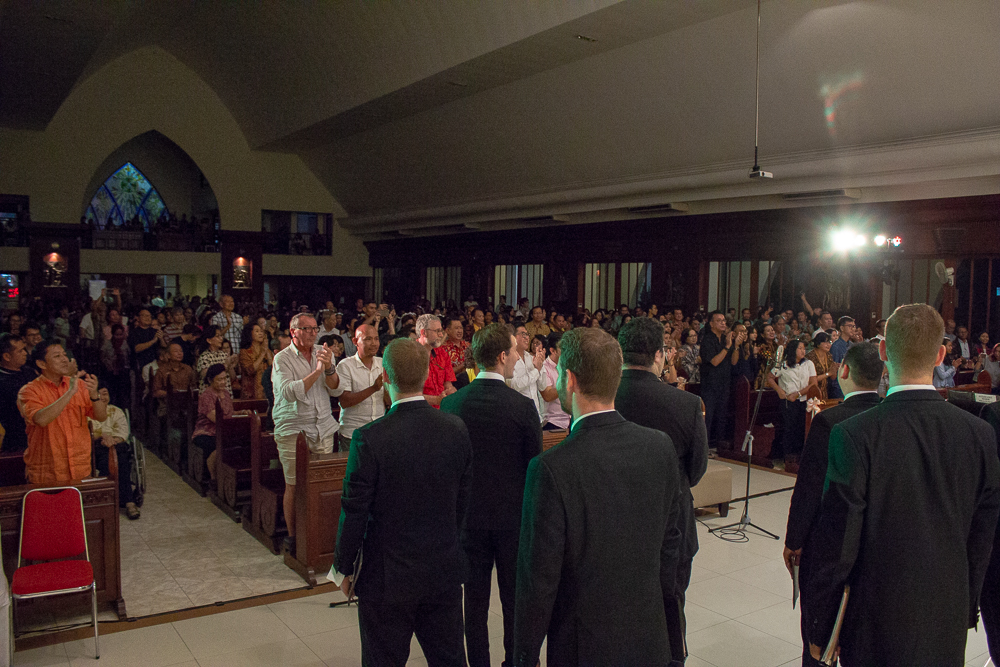 A standing ovation after the encore performance 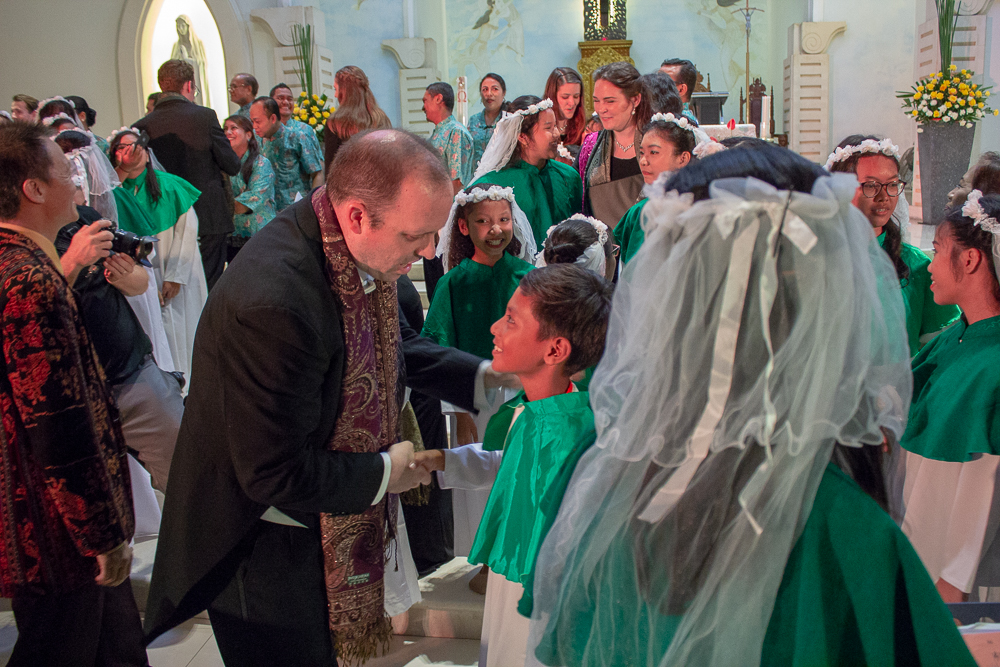 Meeting the other choirs after the concert